We made it to Monserrat

Sorry for the late post. The hotel in Montserrat did not have functioning Internet. When we asked, they just said “No. Wi-fi doesn’t work”. Actually, I’d does – just not here. Sorry too for the long post. I’ve just amended it for the rest day we are taking by staying in Monserrat a second day.

I did not sleep well last night in Igualada. I’m not sure of the reason but it was such a late dinner again, that may be it. Also, I had neglected writing the post before dinner so I was blogging half a sentence then falling asleep, only to wake up moments later to repeat the process until nearly midnight. At 4:00am, I woke with leg cramps and a racing mind so I just laid there until the alarm went off.  The occasional life of a pilgrim.

We got out the door and on the road at 7:00am. At least Melanie slept well. We decided to head for the old town and do a longer walk rather than shortcut straight down the N-II to the trail. We were happy we did too. The old portion of Igualada was beautiful with majestic and grand old buildings with ornate facades. There were not any open cafes but we did have a chance meeting with an interesting Santiago pilgrim. The Spaniard was waving goodbye to someone on the fourth floor of an old apartment building when he also called out to us. He was just leaving home to take a bus to the airport. He was flying to Berlin to begin his Camino to Santiago there. Wow. 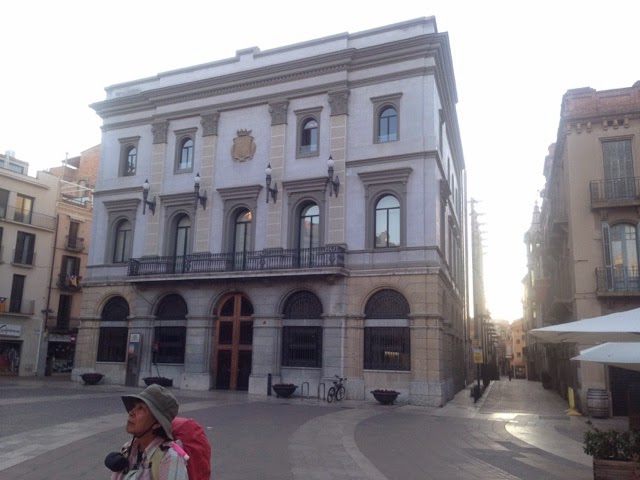 We enjoyed all the rest of the walk to the edge of the city, then there was a 3km slog downhill along the N-II through an industrial estate. Happily, at the bottom of that road, just before it hits the A2, there is a great rest stop, the Restaurant Carpi (no, that’s not a typo).  Have faith. The city does have food! 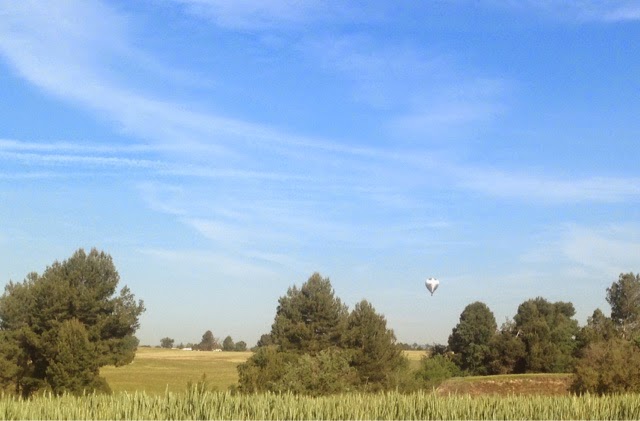 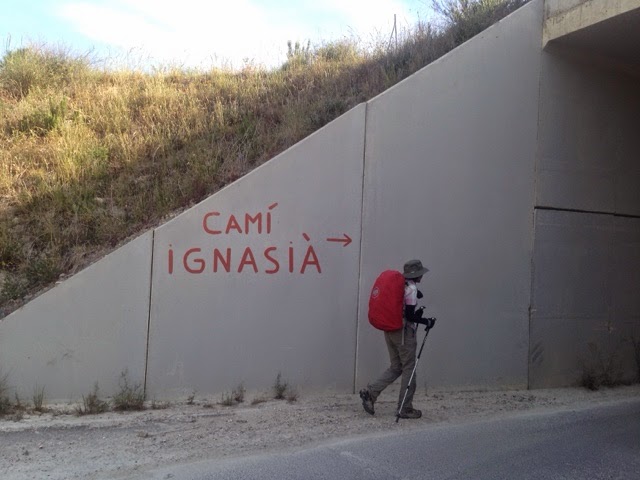 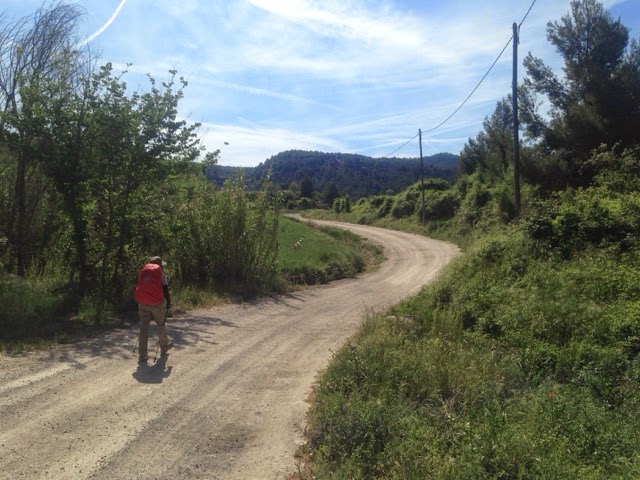 After our first break, the trail goes several kilometers through some lovely countryside, today with a view of a hot air balloon lifting off.  We knew we were near a highway but it never bothered us. Occasionally we would get glimpses of Montserrat off in the distance. 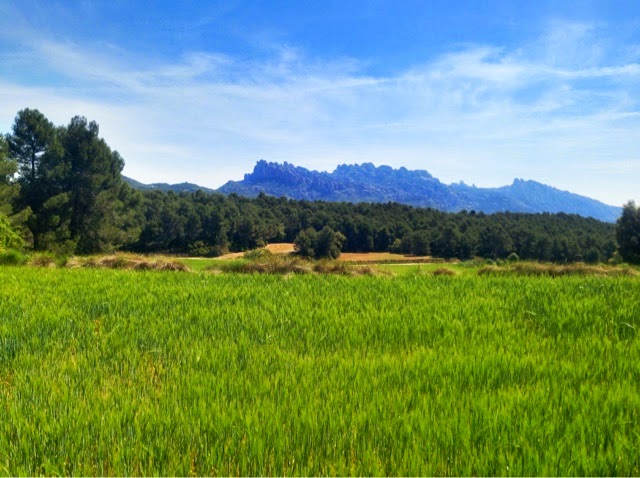 Soon, we had some more walking closer to the A2 until we got to our second stop for the day in a nice little cafe in Castelloli. There were a couple of cafes to choose from but we ended up at one where another Ignaciano pilgrim was just finishing his meal. The German was only planning to go 6km further to the hostal in St Pau de la Guardia today. He had started his Camino from Bilbao to San Sebastián before walking to the Loyola Sanctuary in Azpeitia.  Unfortunately, he left the cafe without his large bottle of diet Pepsi. The waitress only discovered this 20 minutes after he left but she asked if we could take it to him. Hmmmmmm…… I could not say “no” but I had a dilemma. The next 6km was the majority of the 500m climb up the mountain. I had earlier decided not to take my own emergency supply of 1.5l (1.5kg too!) of water because of the weight during the climb and now I was going to carry someone else’s forgotten luxury?!?  What kind of test was this, God?  I felt obligated to do this favor for a stranger but I also felt it was a fool’s errand. Obviously the pilgrim had this as a luxury and must have his own separate water supply. There was no way we would catch him before he got to St Pau too. What to do?

I’m a little ashamed to say I reasoned that it was best to drop the bottle in the rubbish bin. If we saw him in St. Pau, I’d pay him for the Pepsi. If we didn’t, I’d drop the money in a poor box at a church.

The climb was actually enjoyable, partly through wooded areas and a bit through a residential suburb. The views of Monserrat became breathtaking close. Eventually we made it to St. Pau and there was the German, sitting on the curb in front of the hostal looking forlorn. I walked over to him and gave him 4€ and explained why. He laughed and said he only noticed the soda was gone just before he got to St. Pau. He didn’t care about it too much, at first, as he knew he could get something to drink at the hostal. But then he said he was waiting for the hostal to open and he was really thirsty. Huh?  You have water, right?  “No”, he replied, “I don’t carry water”. Good Lord!!  I quickly gave him our other half liter of emergency water as well as some sweets. He sucked the water down like a man in a desert and said it was the best he’s ever tasted. I felt bad about the Pepsi even now but at least I helped a bit. I couldn’t have gotten to him on the trail anyway but, it was an obligation I guess I was given as a test and I bought my way out. I failed. We said our goodbyes and wished him well on eventually getting into the hostal.

The rest of the walk to the summit of the mountain next to Montserrat was even more magnificent with incredible views in every direction. We could see back to Igualada and dozens of towns in the valley before the summit and most of northeast Spain after the crossing the Coll del Bruc at Can Massana. Of course, Montserrat itself was looming huge next to us too. Then we hit the surprising part of the walk. 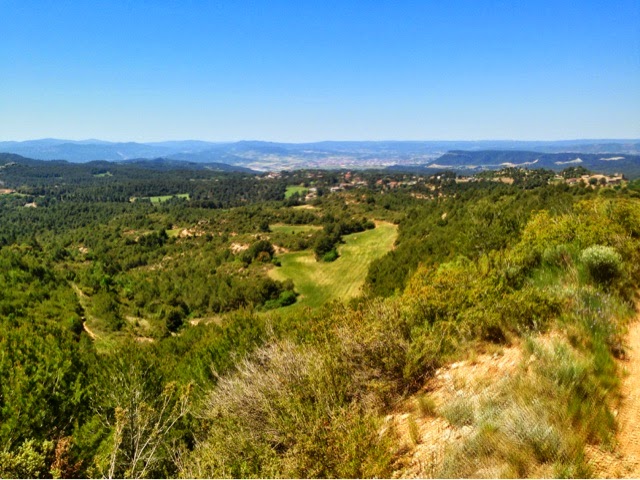 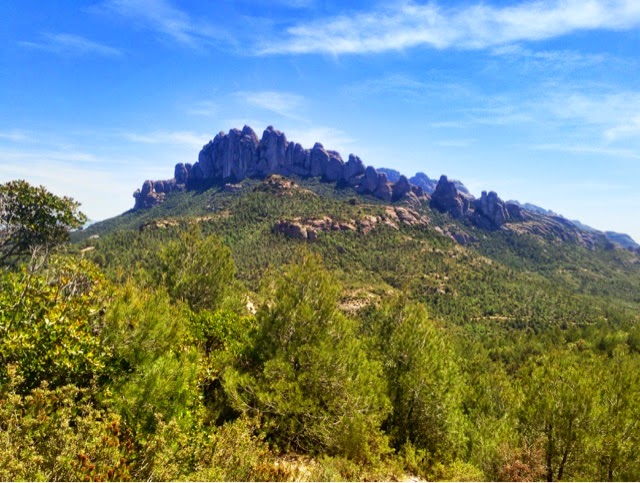 At this point, we looked down at the road in the pass between the mountain we were on and Montserrat. I could not understand but my GPS said we needed to turn right and head down the steep rocks to the road. We looked around and found orange arrows that pointed that way too. Really? Oh well, let’s go!  At times, it seemed like we were skiing on rocks and gravel and at other times we were down on our butts, stretching to reach a level below. We would find that a challenging hash trail but with 8 & 13kg backpacks? It was an experience! After landing on the road with a thump, we wiped out brows and looked at the final stretch to the monastery of Montserrat – 9km of road walking, hugging the mountain with a sheer drop in one side and tour busses and cars racing up and down the two lane road we were on the thin shoulder of. We were also keeping ears open for falling rocks that are so obviously evident on the road. It was a slog but the views to the north of Spain were stunning. We finally arrived…. 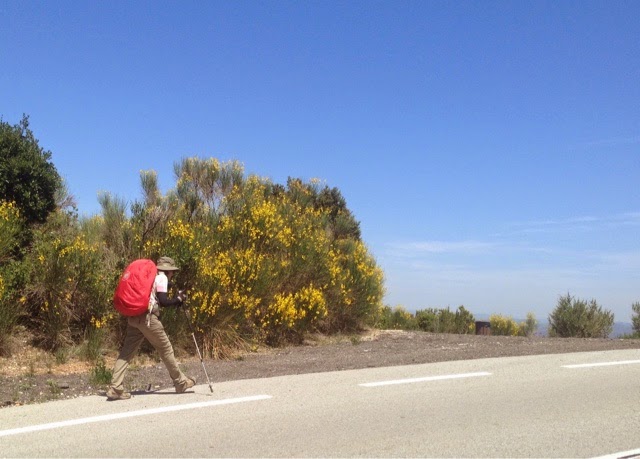 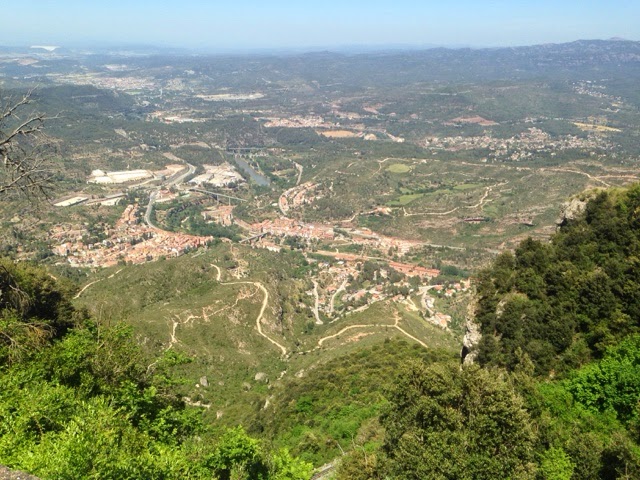 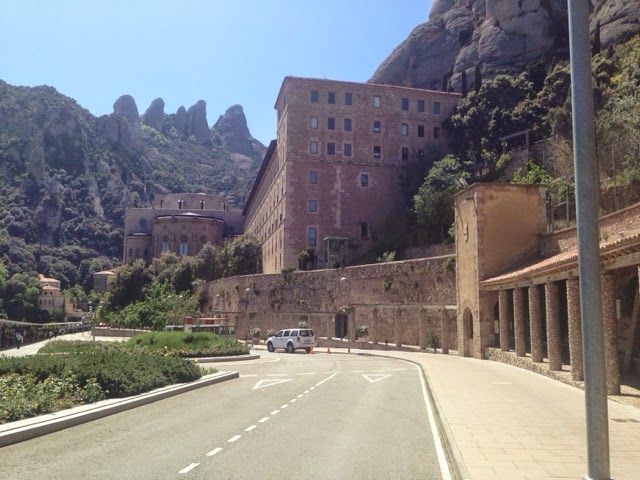 First, let me explain something. We had two goals on this Camino. Montserrat was just as important to me as Manresa. At high school in Baltimore’s Loyola Blakefield, I passed a statue of St. Ignatius every day. Literally, the statue depicts Ignatius on his knee, offering his sword but this was representing the moment when he was dedicating his life to be a soldier of Christ. He is looking upward on the Blakefield statue – I always thought to heaven. No. He was actually looking at the statue of the Black Madonna with the Infant Christ on her knee that legend says was miraculously discovered by children in 880AD – more than 600 years before Ignatius walked by. Eventually, the Benedictines built the Basilica and the peaceful retreat around the statue of Our Lady of Montserrat. I had to kneel before this statue. I had to.

But as we walked past the parking lot with all the cars and busses and people, I started to feel queasy. As we got even closer and saw the crowds of tourists and vendors selling cheeses, olives, ice cream, hats and cheap trinkets, I thought about turning around. Jesus himself would have gone mad with a whip pushing everyone out. We headed straight to the hotel with barely a glance at the impressive buildings nestled on the side of this stunning mountain.

We did the usual daily duties of cleaning ourselves and clothes and resting a bit, waiting for the tour busses to leave. I’m glad we stuck around. Once Disneyland left, the entire complex was so quite and peaceful. Before dinner, we were able to walk around in peace and silence enjoying this beautiful retreat. The Basilica was incredibly breathtaking but where was the statue of Our Lady?  It took a few minutes to spot her, high above and behind the alter. 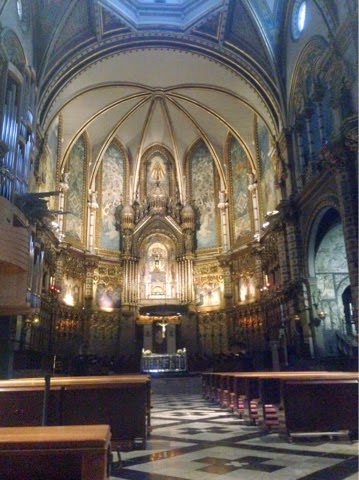 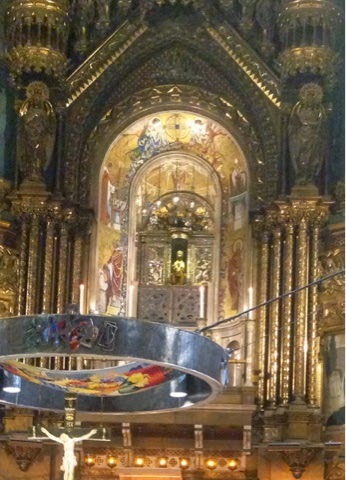 We immediately found the way up to the statue and ended up in a queue of about ten people, rather than the thousands out there during mid-day. Once it was my turn to be in front, overcome, I went down on both knees – on the marble step – after walking 659km – something I can’t do on soft kneelers in mass without cheating with one knee up and my butt on the edge of the seat. St. Ignatius only went on one knee but I have more to make penitence for.

We also attended 6:45pm vespers with the lovely singing of the monks and later the famous boys choir. The rest of the day was spent quietly enjoying the tranquil setting, saying prayers for all who I have promised I would as well as for my own intentions. We lit candles, visited the chapels and explored outside the basilica before and after dinner too. 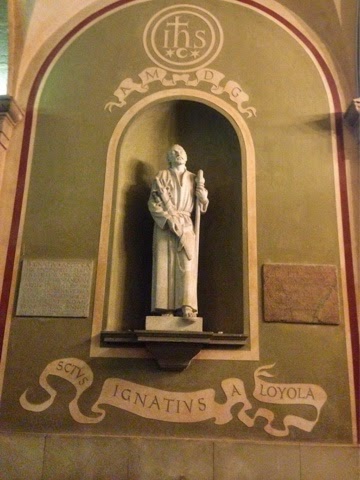 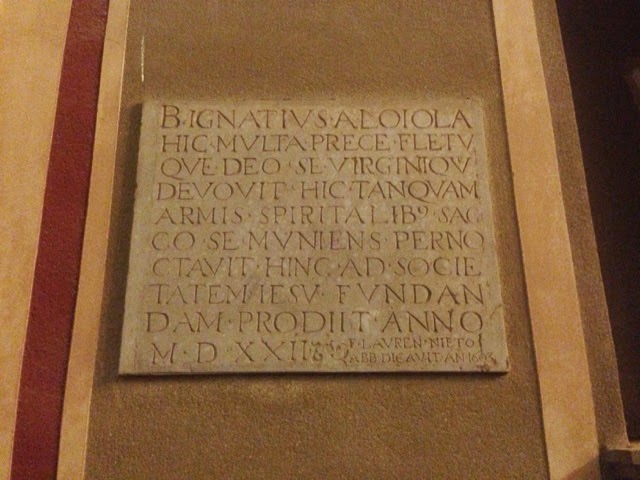 “Blessed” Ignatius?  The statue was put up in 1608 – pre-canonization. 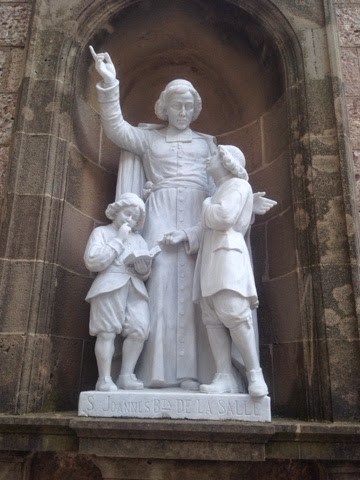 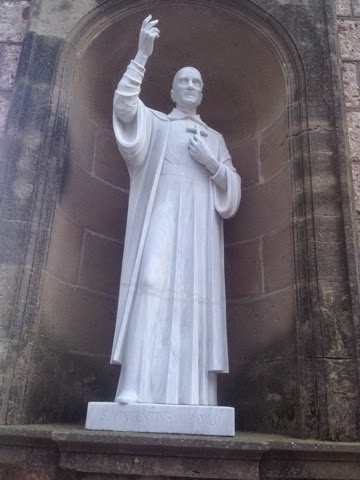 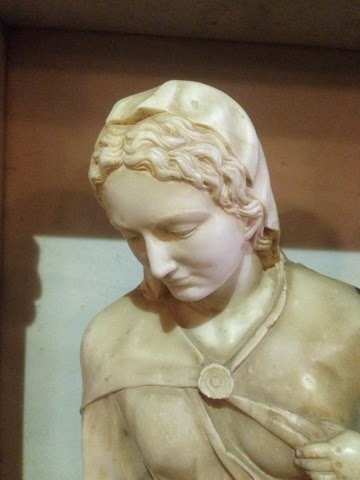 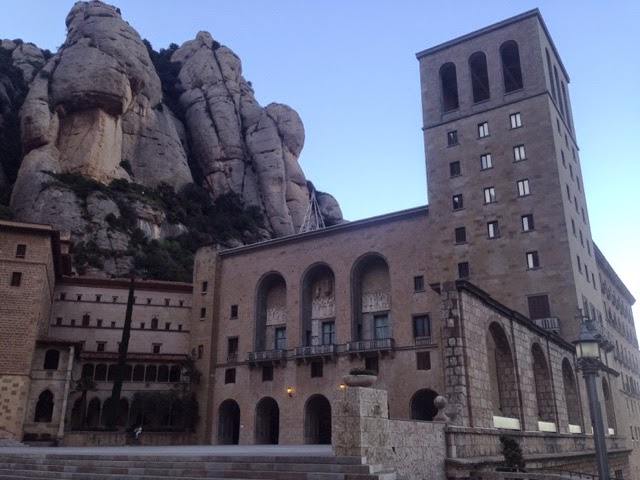 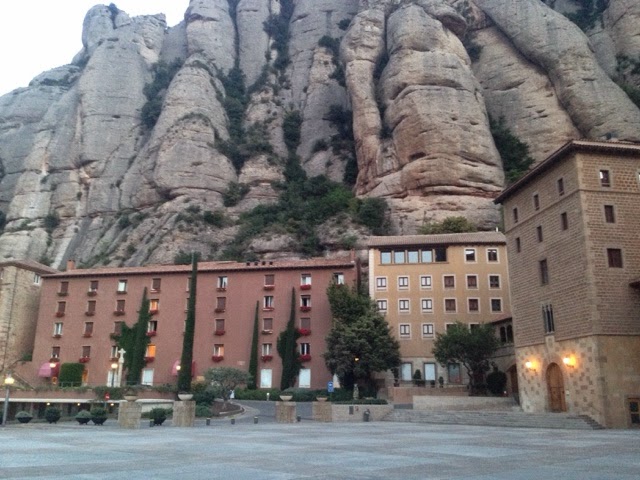 Our hotel – Abbot & Costello according to Melanie 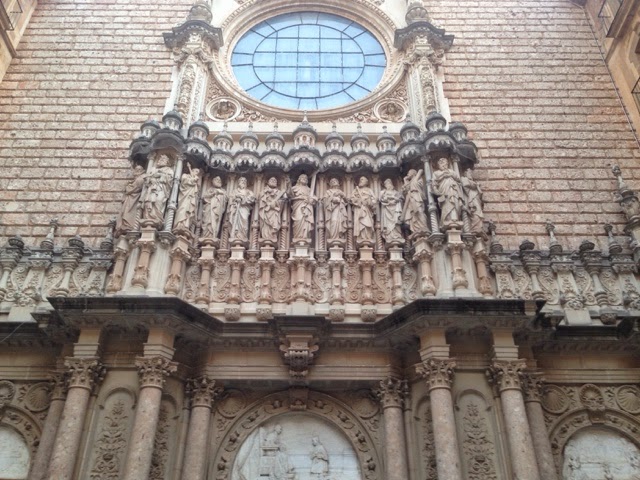 The facade of the basilica inside the centre courtyard

After dinner we bumped into the German pilgrim. Huh? What was he doing here? It turned out that he waited about three hours at the St. Pau hostal before asking around in the small village. He found out that the place only opened on weekends at this time of year so he had no choice but to set off again for Monserrat. With no water or Pepsi and only two candies leftover from what we gave him. He’s tough.

Hoping for a good night’s sleep, let me tell you that I knew that I would soon learn to hate the bells that I was so fond of just hours before. What do the Benedictines need to get up so early for???  Just kidding, I enjoyed the bells. We got up early and attended 7:00am Laudes and a later morning mass as well. It’s siesta time on our rest day now as I finish the post. We are waiting for the crowds to leave. We will again enjoy the tranquility later. We will also prepare for the final days walk to Manresa. There is where I will be with my people – the Jesuits.