We are finally off (our rockers)

Melanie’s traditional question halfway through the first day of our walks is always the same: “Remind me, WHY are we doing this again?”  In time, I’ll have to come up with a good answer.

After surviving the sauna of a room in Hotel Arrupe, we had a nice breakfast there and set off at a leisurely 8:40am. The sun was already up!  Boy, were we late! One look outside and we decided not to chance the “over the mountain” route. I was a bit disappointed, not taking the road less travelled but the sky was a gloomy foreboding mess of gray. Walking on possibly hard to follow mountain trails in the rain would not have been a good decision for the first day but I do encourage anyone following us to consider it (as noted in yesterday’s post).

We heard rumours that the orange arrows painted along the trail to guide us were few and far between but that was a major understatement. We came prepared with a GPS track combined with the GPS Kit and an iPhone and followed that rather than searching for missing arrows. Today was easy to avoid getting lost though because more than half the route is along an abandoned rail line that had been paved over. There were not too many places to think about turning one way or the other anyway. If we had, we would have had to climb a steep berm or dig our way out through the side of the tunnels.  The first arrow that we saw was at the 6.66km point (I hope that wasn’t a sign).  After that point, there were many more arrows but every one was either leading us into a tunnel, directing us to continue through the tunnel or directing us out the other end. I kid you not. Everyplace where there actually was an option to turn right or left, there were no arrows. Don’t let that scare anyone thinking of following us though. The GPS tracks are downloadable on the caminoignaciano.org website and GPS Kit cost only a few dollars (and maps.me is better and free!). It is not a battery hog either and it does not use any 3G/4G data.

There were many people who walk, run or bike this path from Loyola to Zumarraga but we were the only pilgrims we saw, as expected. We were twice wished a Buen Camino which was nice and three elderly but fit Spanish men knew all about the Camino Ignaciano. It sounded to me like they regularly walk the first two stages, just for fun.  One of them warned us of the high mountain on the second day. We can’t wait.

Again we are staying in the Hotel Etxeberri, just at the entrance to town. Isabella put us in a nicer room this time, bless her heart. These first few days are spoiling us. It will be hard to stay in an albergue (hostel) after this luxury.

Other than being pretty wet and somewhat cold, we have no complaints, touch wood.  It was a short easy walk today but we’re both pleased to be blister free anyway.

The clothes are washed and hung to dry.  We’ve showered, tended to our feet, had a massive lunch (menu of the day) and now Melanie is napping while I blog. Later, we’ll walk into town for a stroll and light dinner.  And that, my friends, summarizes the daily life of a pilgrim on this lonely route. 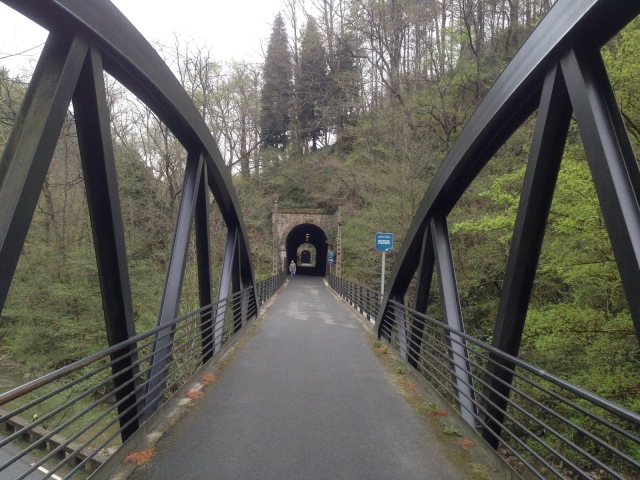 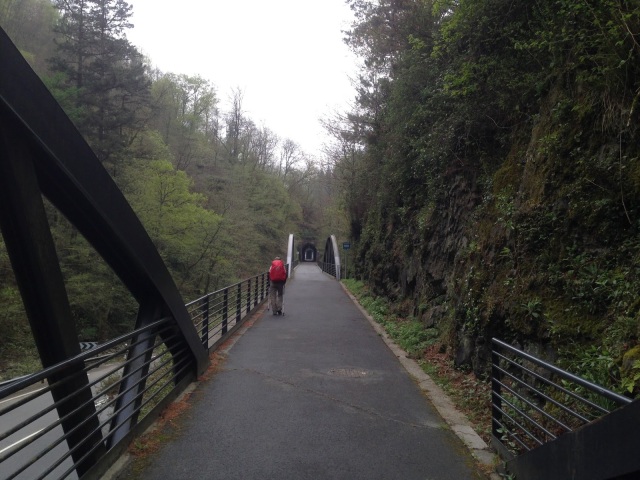 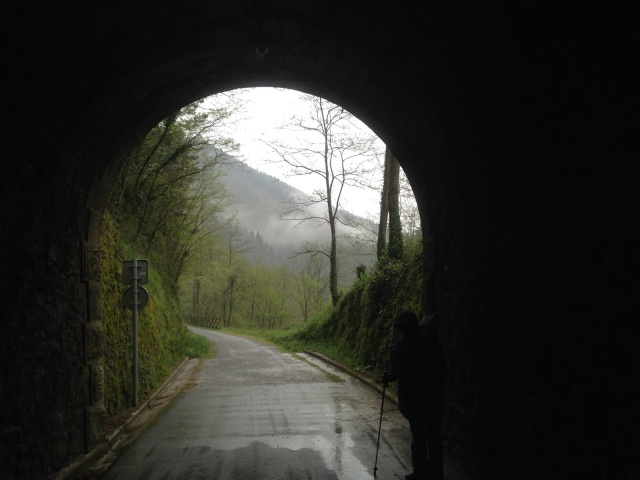