In 2010, Melanie & I retired from “real” work.  We had worked very hard to make rich people richer and it was time to do something more rewarding. We decided to stay busy by spending half our time volunteering (mainly at Willing Hearts soup kitchen in Singapore), half our time scuba diving (teaching and guiding for White Manta Diving) and half our time travelling.  What is wrong with being busy 150% of the time?  Part of the travel needed to include either a long trek or a mountain climb each year so that we would be fit for at least part of the time.  This plan matched up perfectly with discovering the ancient pilgrimage routes in Europe known as the Caminos. 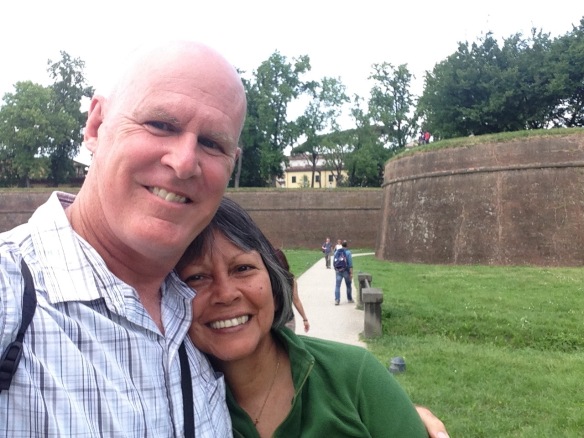 A little later in 2010, our friend from Thailand, Wichanee, started to send us some of her regular travel postcards but these ones seemed a bit different.  Every day, we received a new postcard from her from a different town in northern Spain.  We thought she was just touring the country but when we checked the map, we noticed that she was moving very slowly and we could not figure out why.  When we went to visit family in the USA for Christmas in 2010, we saw a television documentary on the 500 mile Camino de Santiago de Compostela.  The lightbulb went off. That´s what Wichanee was doing!  That looked cool and we added the walk to our bucket list to do “one day”.

Around Thanksgiving in 2011, on the airplane to the USA again, we stumbled onto the Camino movie “The Way”, starring Martin Sheen and Emilio Estevez. That was definitely a sign. Right then on the plane, we decided to walk the Camino Frances in the Spring of 2012.  Unfortunately, my Mother passed away in March so we delayed the walk until September, 2012.  I can’t say that it changed our lives but it was a major impact and we were definitely hooked.  We became walkaholics!  When we found all the other Camino routes, we further became more specialized Caminoholics.

Our first Camino, at the wine fountain, Bodegas Irache