We are so close, I could see Montserrat

The day started when the alarm went off at 6:00am. Melanie and I both had trouble dragging ourselves out of bed so it was obviously going to be a slow day. It took us until 7:00am to get out the door but now we needed a taxi to get to Pallerols, to continue our walk from where we did not cover yesterday. 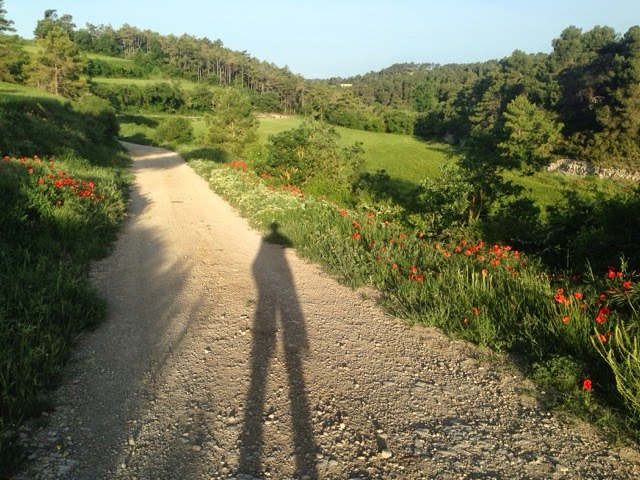 An old friend from the French route -our long shadows. Obviously, I turned backwards for this photo. 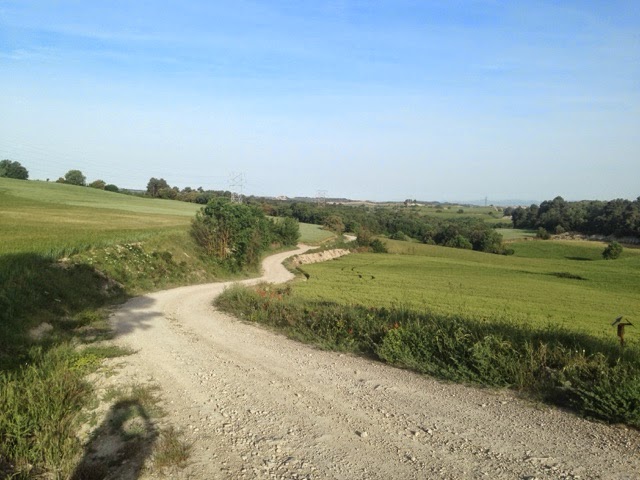 I’m still not so confident in Spanish to call a taxi company myself so I looked for an open shop where someone could call for me. The problem is that NOTHING in Spain seems open at that hour.  Eventually a man walked by and I explained everything – in Spanish – and asked him to speak with the taxi company for me. It turned out that his friend was a taxi driver so he called him first. There was no answer so he tried again. Nothing – he said his friend must still be sleeping but he said it with a shrug that meant “after all, it is ONLY 7:15am”. Just then, another of his friends drove by (this guy must be popular) and stopped to say hello. Our new friend explained our situation to the driver and the driver instantly offered to take us to Pallerols. We happily accepted and upon arriving, gave him the same amount of money that the taxi driver got yesterday. That meant all three of us were thrilled with a win-win deal.

The walk from Pallerols to Panadella was chilly, somewhat shaded, lovely and too short. It was only about 4.5km through the peaceful and scenic countryside before we got to the rather grotesque Panadella truck stop, restaurant, bar, hostal, highway service area. At least we could now eat breakfast – maybe. Just before getting there though, we met a Spanish/English Santiago pilgrim who had just left the hostal. We exchanged warnings and advice about the road ahead we each would take but he didn’t mention the circus that was Pandella. 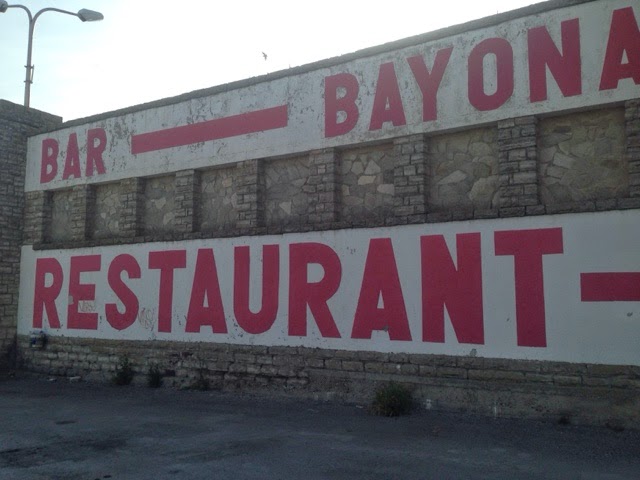 Upon entering this giant all-in-one building, we were shocked at how busy the place was. There were only about a dozen cars and a couple of trucks in the parking lot so I am not sure how the others got here. I elbowed may way to the long bar and asked for a pastry, juice, coffee and toastados. I should have taken the cue when the waiter sucked in a gallon of air through pursed lips at the mention of toastados. He warned me it would take five to eight minutes. That’s not so bad I thought. I can wait, I replied. He took me literally. A half hour later, with warm juice and cold coffee waiting at the table, I was still being told “it’s coming”. I begged another waiter to check to see if the cook had died or something, despite other people’s orders of eggs, tortillas, etc. coming through the hole in the wall. Seriously, I realize that other people’s orders may have been in first but how difficult is it to multitask, making toastados?  You put yesterday’s uneaten bread on an automatic toasting grill and when it falls to the lower level, you put in on a plate and hand it to the waiter. 40 minutes after getting Melanie her coffee, she now had something to eat it with!

While I was on my death watch for toastados, two busses pulled in and unloaded about a hundred members of the OLCA (Old Ladies Catholic Association). They marched into the large restaurant and filled every available seat, including the extra two at our table. Then, almost every one of them pulled out a sandwich from their purse and ate it. The bottle of water was the next thing that came out. The piece of fruit and the paring knife was next. Then they cleaned up and left!  The restaurant didn’t make a cent off of them!

Upon escaping an hour after arriving – that’s 5km in Camino-speak – we walked out the front door, shaking our heads. Just then, a very large 18 wheeler stopped in the middle of the N-II. The driver got out for breakfast as traffic diverted around his truck. His load was quite obviously three levels of many large pigs. You just could not mistake the foul odor nor the squealing of the many beasts, all either fighting, fornicating, protesting their innocence, calling for the driver to turn on the air conditioning or just mocking the sound that their neighbor was making.

We ran down the road and were greeted with the next 23km of the walk – the bicycle lane of the N-II highway, pretty much all the way to Igualada. There were nice views looking to the non-highway side but the best thing to say about that long portion was that it was mostly downhill. 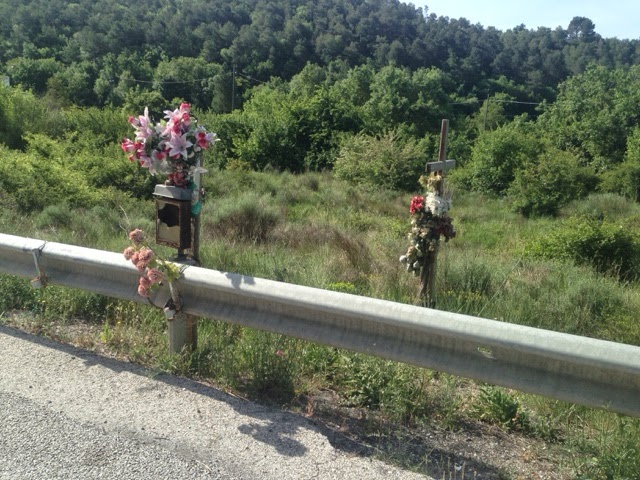 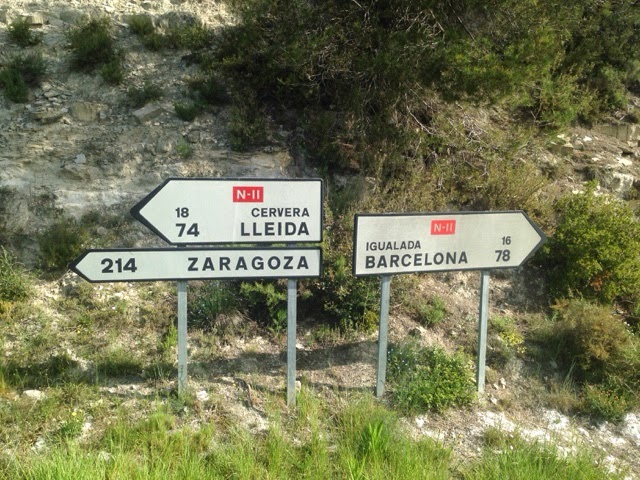 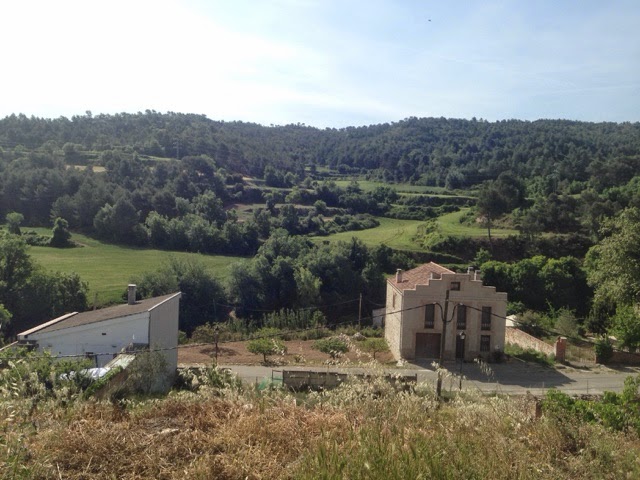 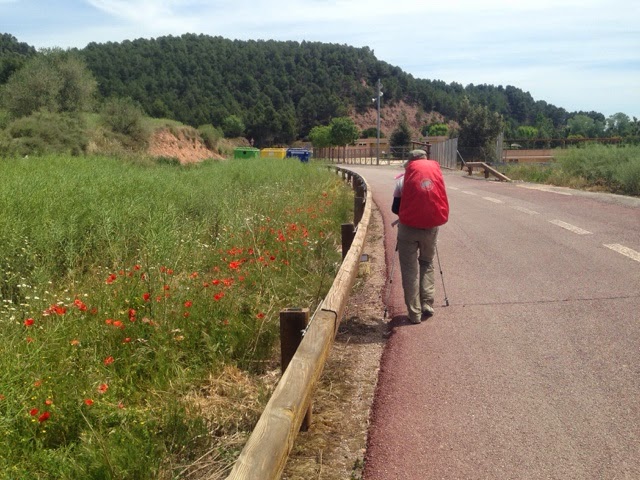 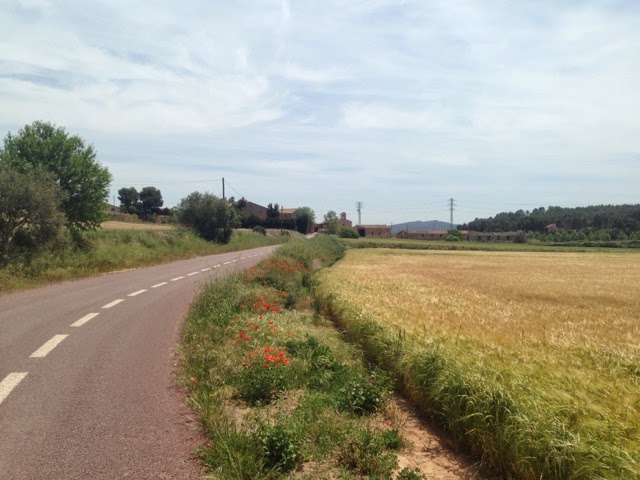 Just before the bridge over the highway leading into the suburbs of Igualada, we met an English pilgrim to Santiago. I think he has about 1,400km to go and he started the day at Igualada at about 2:00pm. We wished him luck as well as advise.  Seconds after that on the bridge, we spied the mountains of Montserrat in the distance. That is tomorrow’s objective but in a may, also a lifetime’s ambition. We had caught a glimpse of the mountains while passing on a train four weeks ago but I’m really looking forward to being there tomorrow. 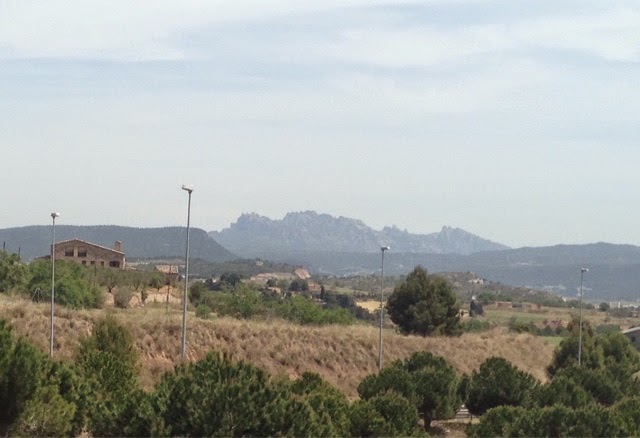 One thing that those following should note is to ignore any mileage markers they see on this stage. It can be very disheartening to see a sign that says it is 17km to Igualada, then walking briskly for 35 minutes before spotting the next sign that says it is 16km to go. Really?  Worse yet is that the next sign you see says it is 16.5km and the one after that says 17.5km!!  Of course these signs represent several different needs. One sign may be the sign for cars on the highway looking to the exit for the town. Another might be for GR trekkers taken a later deviation. Another might be for the Camino Ignaciano pilgrims. It’s still disheartening though.

One error I made last night in my exhaustion was booking a room for today. Some days I just call ahead while other days I use booking.com to arrange a room. We have also just left the question of where we sleep open until we figure out what is available when we arrive. Yesterday I booked a room for tonight in the decent Hotel America but I didn’t bother to check out where it was actually located. It turns out to be in the north side of the modern portion of the city – pretty far from south, old city, with its 1000 year old architecture. We were also too tired to even take a taxi into town before dinner. On the plus side, we can still see the area tomorrow as we can pass it early on the stage to Montserrat. Also, it’s down hill from here to the old city. Finally, there is a Burger King attached to the lower level of this hotel. Do I have a burger craving, or what?!?!?