In the shadow Montserrat, we arrived in  Manresa, exhausted, drained, battered but better.

We didn’t need to set the alarm today. We waited for Big Ben from the basilica to wake us. At 5:45am, like clockwork, he scared us awake. We laid in bed for a bit, mentally preparing for the last day of our Camino. We love our long walks but we also love finishing. We love the simpleness of the days but we also love our normal life back in Singapore. Today marked the end of another journey but at 5:45am, we were not quite sure how it would turn out. We didn’t expect the Santiago fanfare. We don’t know of any other pilgrims walking today from Montserrat to Manresa but what will the end be like? A shared kiss and hug? A selfie in front of the basilica?  Or would there be someone else there who understands the experience? 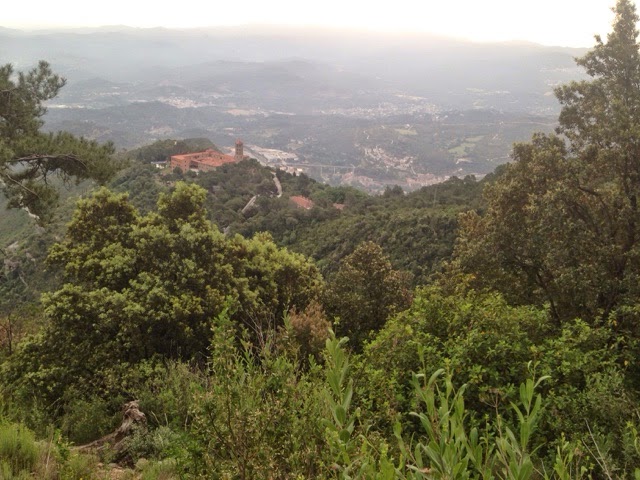 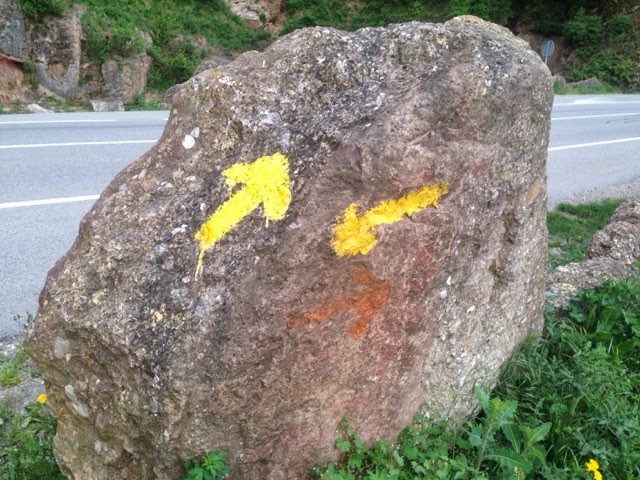 Before setting off, we picked up the “picnic bags” that the hotel made for us. When I told them the night before that we would be leaving before breakfast, they volunteered to pack us sandwiches, fruit, cookies and water. This gesture put them back in my good books because I wasn’t thrilled with such an expensive hotel with an “I don’t care” attitude about the wi-fi not working and having the foulest tasting tap water in Spain. 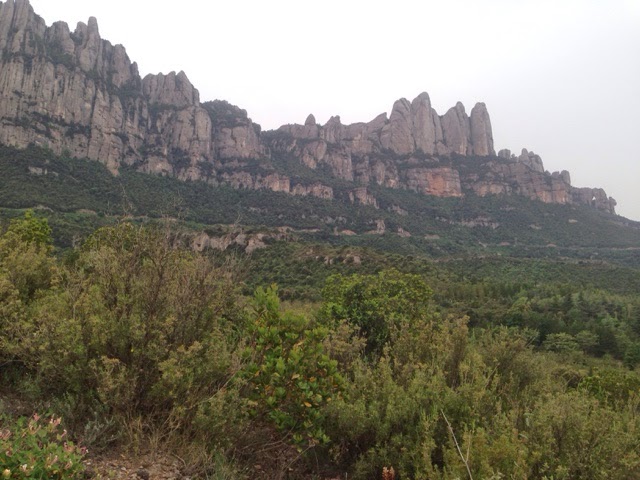 For those following us, inform the hotel the night before of your early departure. Also, I should amend yesterday’s post to admit two mistakes that I only learned of today. The first 3 or 4km leaving Montserrat is along the same way we entered. Coming to Monserrat though, we walked the whole way along the road shoulder. You definitely should take the dels Degotells trail to avoid the long parking lot. Also, when on the road, walk outside the guard rails. Your feet, eyes, heart and mind will appreciate your decision. 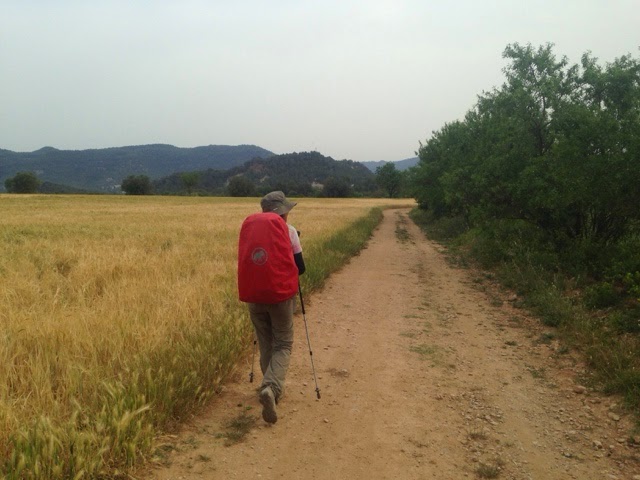 The descent off Montserrat was a beautiful but sometimes a steeply tricky trail from the hermitage of Santa Cecilia. It wasn’t as bad as the descent to the Monserrat road the other day but it was longer. Eventually we hit a gravel road which took us the rest of the way down to Sant Cristofal where, after a few houses, there is a nice wall to sit on to eat a sandwich. 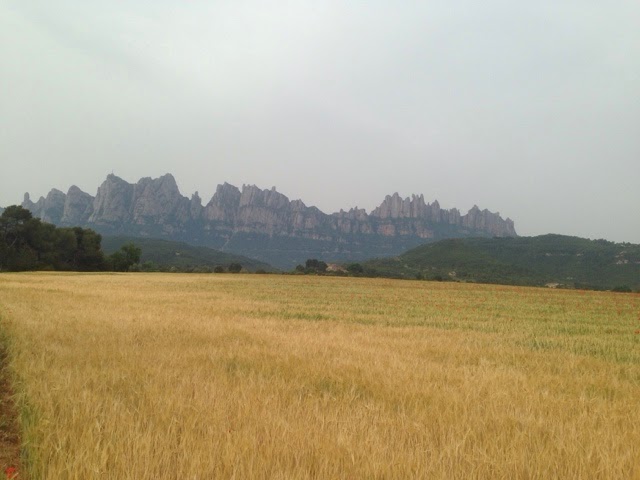 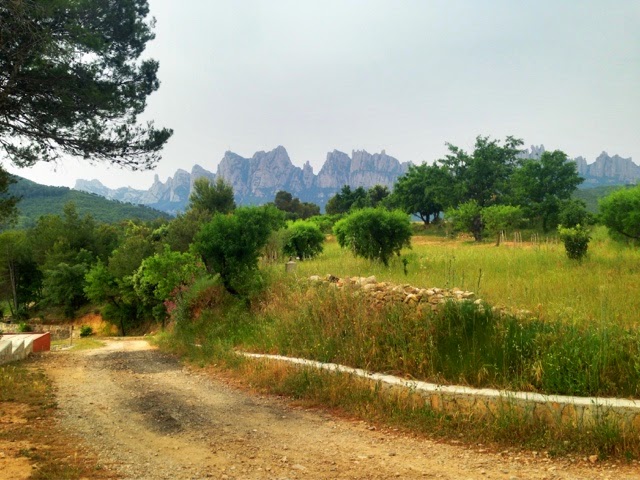 A kilometer or two further down the road, around the 10km mark, we stumbled upon El Raco, a great bar & restaurant right on the Camino. Having just eaten though, we just stopped by just for a coffee / juice. They had wi-fi though so I could finally find out how the outside world was surviving without us. 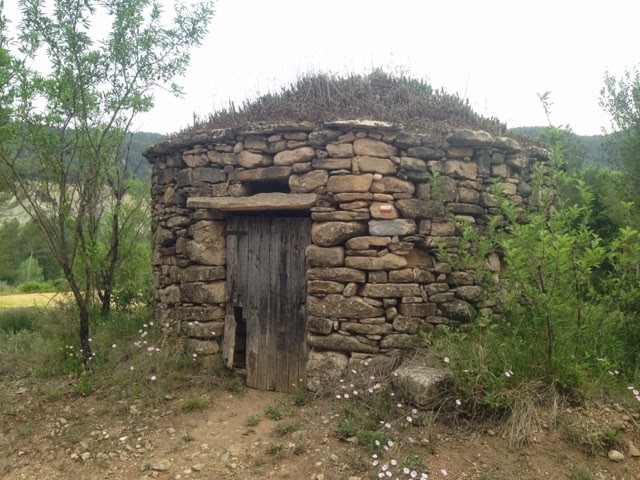 With the descent, as well as the rest of the way to Manresa, the trail was the most varied of the Camino and ranked up there with the walks to and from Verdu as the best since the Basque country. We had lots of downhill (my favorite), forested trails, farmland tracks, lovely villages, hilly terrain, etc., all with stunning views back to Montserrat. 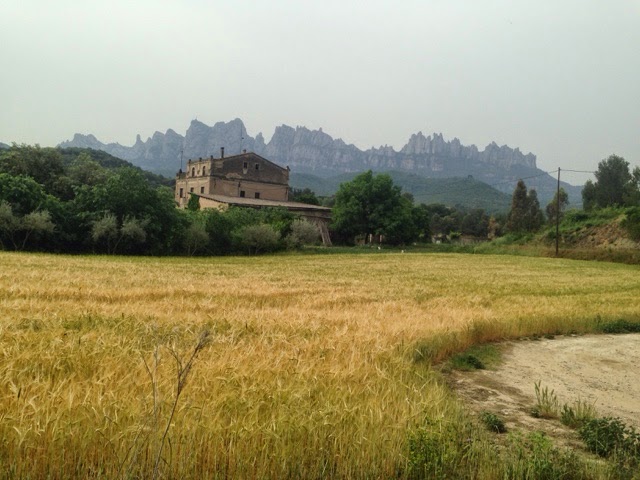 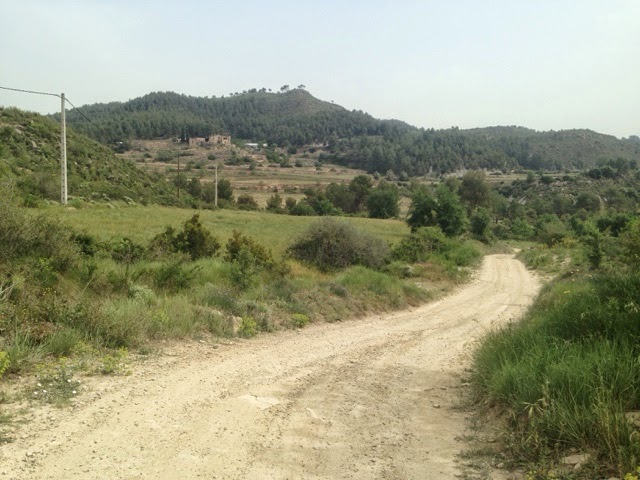 Further beautiful trails took us to the edge of Castellgali where we stopped in the first bar we saw. It turned out to be a great place where the nice bartender was happy to chat, practicing his English while I practiced Spanish. We taught each other a few words but his English was decidedly better than my Spanish. Melanie also chatted with a few other customers about the Camino and it turned out later to be a good thing she did. 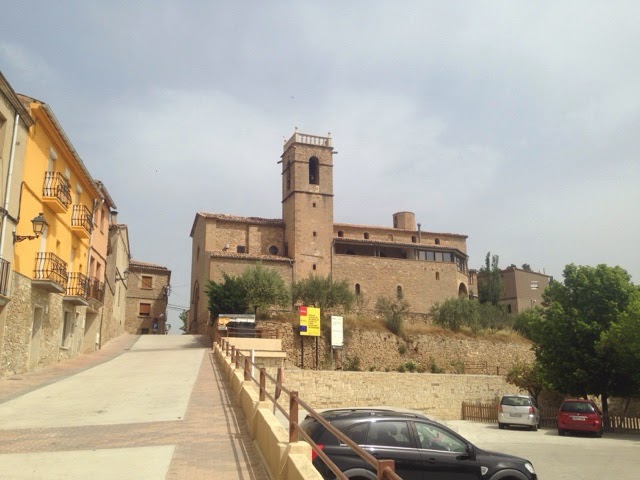 After leaving Castellgali we dropped down to the lowest part of the day (figuratively and literally) by two completely different millenniums’ roads. We took a 10th century stone path (perhaps oddly named The Roman Road – it looked like a Roman road but 10th century???) a few hundred meters down to a brand new busy highway which we had to brave for 500m. I am sure St. Ignatius took one of those two routes. After that, we skirted a golf course and enjoyed(?!?) our last big steep climb of the Camino to an abandoned stone quarry. Just past the top, we were rewarded with more forested trails and then our first glimpse of Manresa. 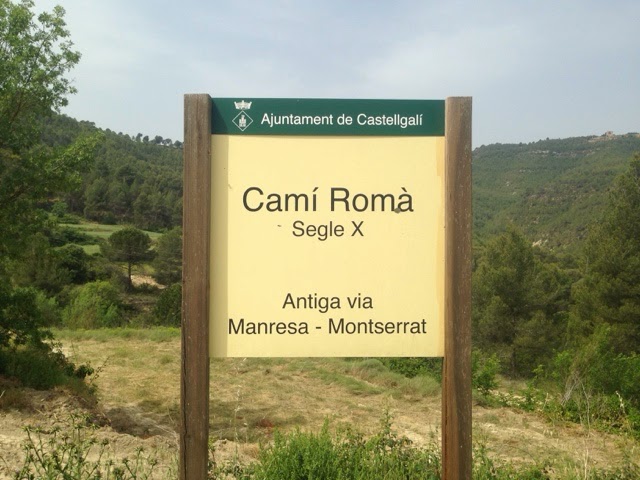 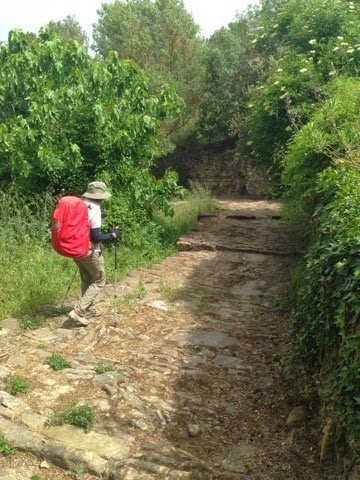 We had a few kilometers of farmland tracks to navigate among some impressive farmhouses too. Some of these paths were on walled Roman roads that I am sure Ignatius also must have used. This portion of the trail seemed to move slower though as we kept looking for the Tower of Santa Caterina which looks down over the river across to Manresa. 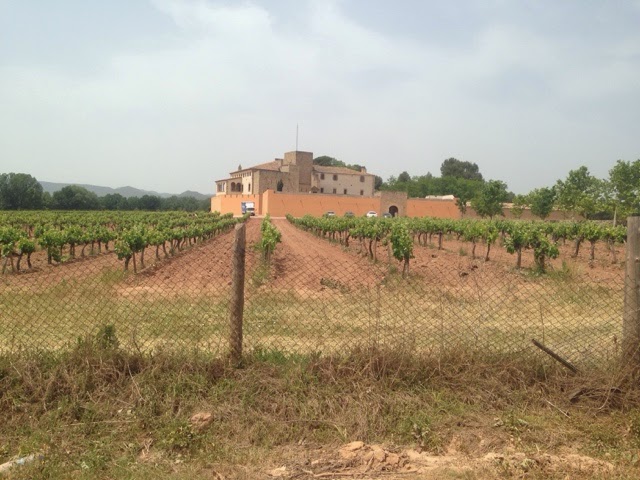 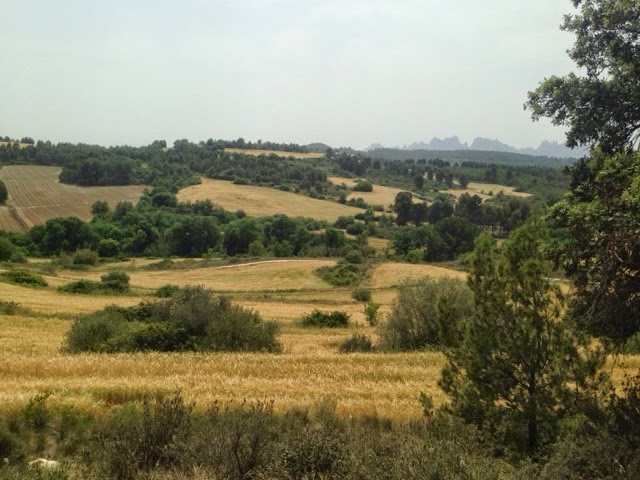 When we finally got to the tower (was that really only 4km???) we were stunned by the view of the entire city. The city’s basilica and the Jesuits’ retreat house were immediately recognizable and joys to behold. All we had to get there was a simple last kilometer down the hill, across the ancient bridge that St. Ignatius crossed and then around the corner to the church which was built over The cave where St. Ignatius wrote the Spiritual Exercises and prayed in preparation for his trip to Jerusalem. Or that was at least our plan…. 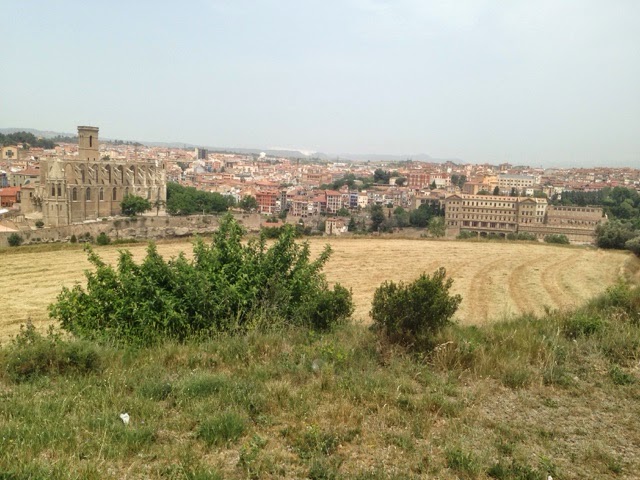 You must realize that at this point in our journey, both today and after the whole month, we are dog-tired. Exhausted is a better word. We are also thirsty as anything because we had trouble drinking the foul water from Montserrat. All we wanted to do was walk that last kilometer and reach our month-long goal. But… 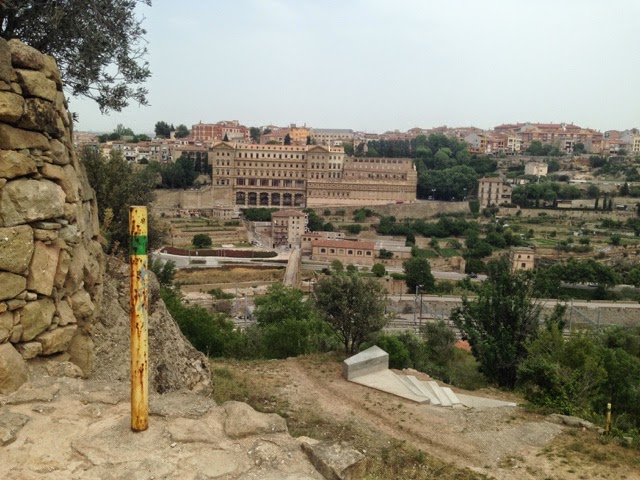 We had a few final challenges to overcome before reaching Manresa. First, the Camino path down from the tower was fenced off with signs refusing entry. We checked the GPS and the only alternative route we could find included backtracking and walking several more kilometers. Fat chance of that happening. We climbed around the fence and took the path anyway. It turned out to be under repair but at siesta time, no one was working and we got through. Negotiating the fence at the bottom was tougher but we got around that one too. 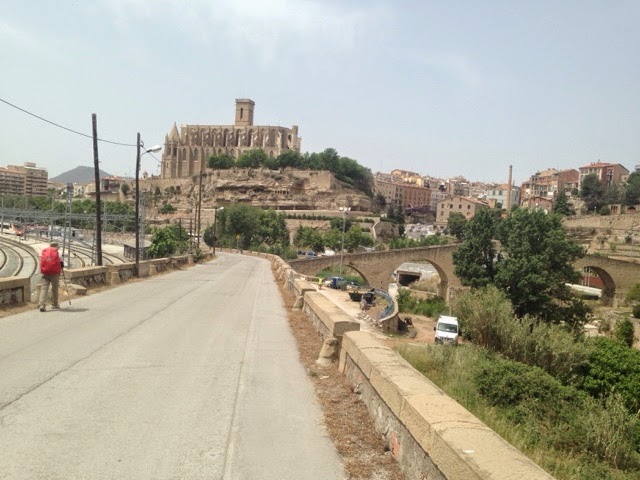 Now to the 12th century bridge…. which also happened to be under repair. There was no passing here though as there were workers on it and an impassible fence in the middle anyway. The detour wasn’t too much further but it was disappointing to miss Ignatius’ footsteps. 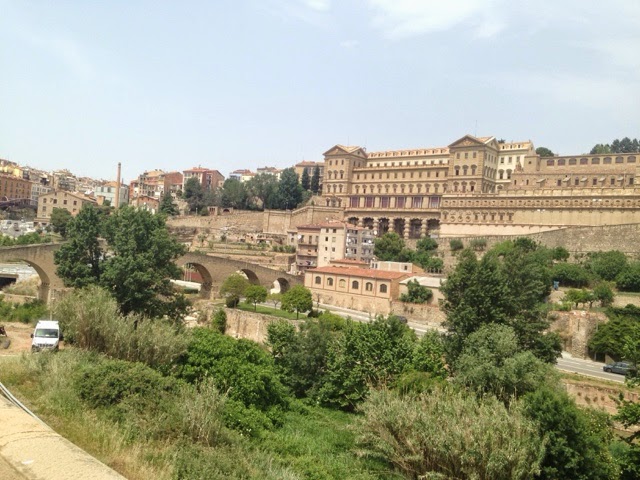 Now to the La Cova….. After pausing for a moment on the step of the other side of the bridge, after taking the detour, we headed up to the retreat house. Where do we go for the registration of our walk though?  We flipped a coin and headed to the church. It turned out to be the right direction but not in our case. We arrived to the locked doors at 3:05pm. We knocked. We asked anyone passing by. We looked for signs. We had no clue where to go. Dead on our feet, we decided to circumnavigate the massive building, looking for an open entrance. Here is where we made another mistake. Going counterclockwise around the building, with the crazy ancient street maze on the hills, meant we walked another kilometer and put us so close to the city’s main basilica that we decided to climb to that first, get a sello and inquire there.  That was closed too. A very helpful woman suggested we wait until after siesta and ask at the Jesuit House. Ugh!

On that walk around the Retreat House, we were feeling pretty low and lost as to what to do. On one back lane though, a man stopped us. He said he recognized us from the bar in Castellgali, 10km back on the trail. He asked if we walked all the way here. Yes we replied, that and 675 other kilometers. He was very impressed and he lifted our spirits greatly.

After we visited the outside of the main basilica, we gave up anyway and headed to our pensión. Calling last night, we found out that the Jesuit Retreat House was full and the Pensión Roser Manila Sant Andreu was the closest one to La Cova. It turns out that we are in a very Muslim area of the city and the place looks like a dump from the outside (and parts inside too). That said, our room is quite decent and the squeaky bed is forgiven because they have the best wi-fi here on the whole Camino. Also, dinner last night at the Pensión Masai around the corner was an awesome value. Two beers, two soft drinks, a massive, delicious salad, grilled vegetables and too much meat (pork, beef AND chicken) cost us a whopping 13.50€ – total – not per person. 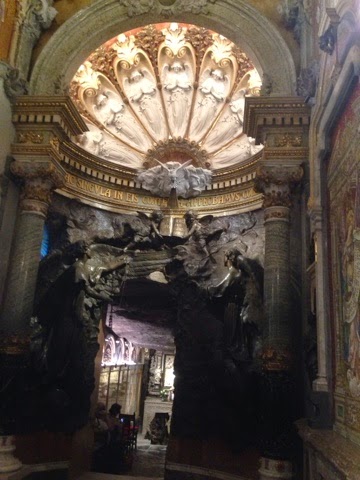 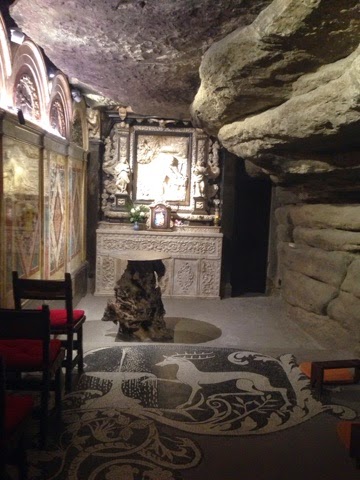 As expected, there was no fanfare but there were a few tourists and people doing retreats nearby. We talked to anyone who seemed interested about the Camino. We were too excited just to go off into the sunset. We also visited the church and cave of St. Ignatius for some prayer and meditation. If only those rocks could talk.

Thanks everyone who followed along the Way with us. Thanks much too for your comments and encouragement. Many times, it made a huge difference to us. It was a challenging walk, as all Caminos are, but it was special in its own way. Again, there are people, places and experienced we have encountered that we will remember forever.

Peace, love and thanks y’all.