Skip to primary content
Manchester United won last night in overtime so this morning’s departure was a little delayed.  We didn’t start walking until 7:30am when it was an unseasonable (and unreasonable) 5 degrees Celsius. It warmed up later, in fact if was pretty hot in the sun by the afternoon.  There wasn’t much shade today with a good portion of the walk was spent on tarmac.  There were some nice views of the sea but not as nice as yesterday’s. I think that first day’s walk is going to be tough to beat. 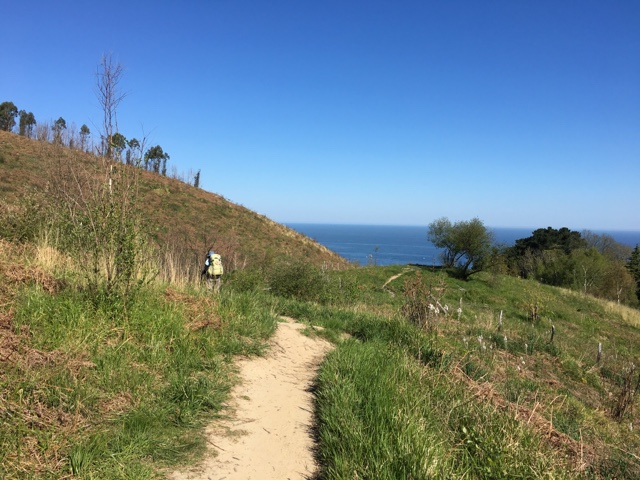 The climbs today were shorter, topping out about 300m and a few smaller ones.  Normally I would not think much of them but my legs were still stiff from yesterday.  Again, we managed it though. 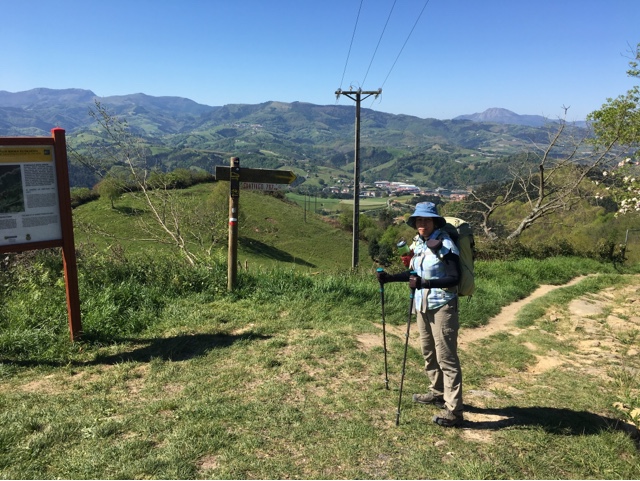 Not far from San Sebastián, during the first climb, there is a place well known to pilgrims who have walked this route.  Someone living in the village has graciously left water out for pilgrims, some chairs to rest on, a stamp for our credencials and some other things. I saw that only two other people had signed their guest book before us today and 14 people passed us later in the day so I figure that, including us, there were probably not a lot more than 18 of us walking this section.  That’s a good sign for when we have to stay in places with limited accommodations.  Most towns can handle at least two dozen pilgrims at a time so we are not worried.  That said, the pilgrim count also told us that we are, more likely than not, the slowest walkers out here! 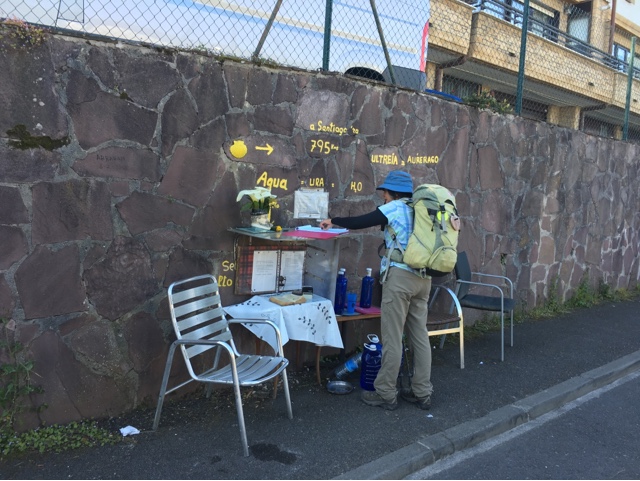 We again chose to stay in a pensión (Zarauz Playa 65€) and based on yesterday’s ordeal, we booked ahead using booking.com.  It takes some of the pressure off when you know you have a bed waiting for you at the end of the walk but I really don’t like one aspect of this pensión system.  Most pensiónes have just a few rooms and are run by someone that is living nearby.  When we arrive, we are supposed to call to get the owner to let us in.  That’s fine except 1) when we don’t have a Spanish phone and 2) when the person says, I am busy now, I’ll stop by in an hour to open up the place.  Neither of those things are good but, fortunately, we have only had the second problem once in the past four Caminos.  Sadly, the “call when you arrive” happens almost every time.  If you are following us and using pensións, you must get a phone before you start walking. 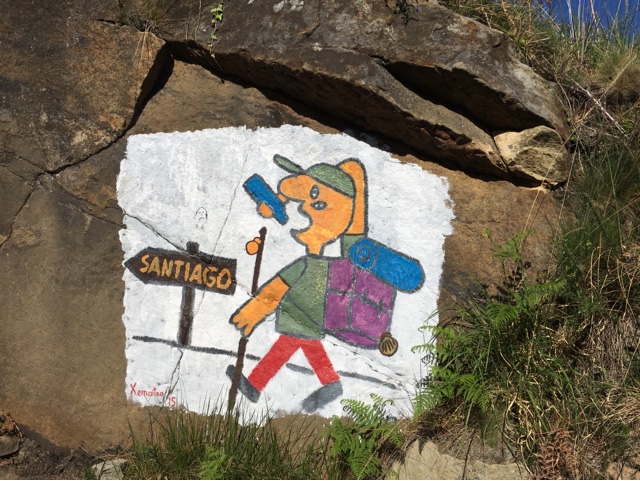 We had one small 100m climb and descent before our planned lunch destination oat the village of Orio (no relation to the cookie).  One unusual memory of this section  were the number of crosses on the road.  We are used to seeing crosses occasionally to mark where someone had died in a car accident or in honour of some service men from a war but here there were about a dozen along a few hundred meters of this road.  We reckon there was likely a battle there during the civil war.  Either that or they never managed to convict the town’s alcoholic taxi driver. 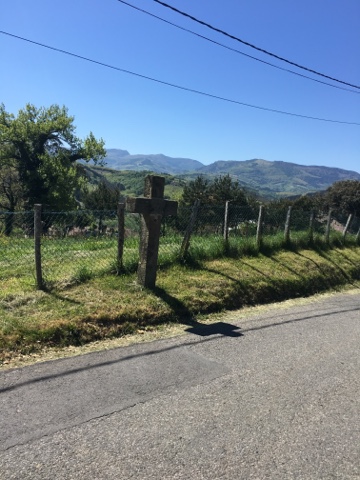 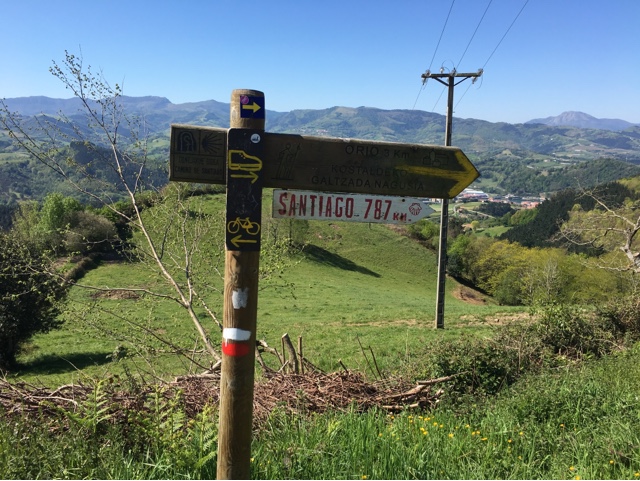 At Orio, there is one bar / cafe that is perfectly situated on the riverfront for pilgrims. Eight pilgrims who passed us were already having lunch there when we arrived.  It also appears to be the first choice drinking spot for the residents too.  That made getting service a challenge but we eventually got some sandwiches and drinks and we found seats inside.  The French pilgrims couple at the next table made themselves at home.  They both took off their shoes to air their feet.  The wife also took off her socks and gave herself a foot massage.  I bet they would not do that in Paris. 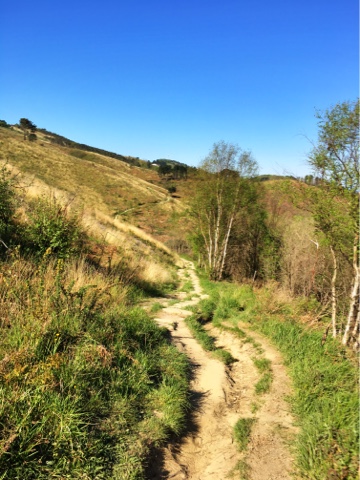 We are already back from dinner and shoppingo.  I scored a local SIM card for my phone so tomorrow’s pensión owner is in trouble.  We also managed to get a stamp for our credencials at the local parish office. At the grocery store, we bought two apples, two pears and a kilo of large ripe, delicious, juicy strawberries; all for under 4€.  Finally, Melanie found a lovely little restaurant for dinner.  They served paella on this Friday night so we had to get that.  Delicious!
Everything else is good.  Peace y’all. 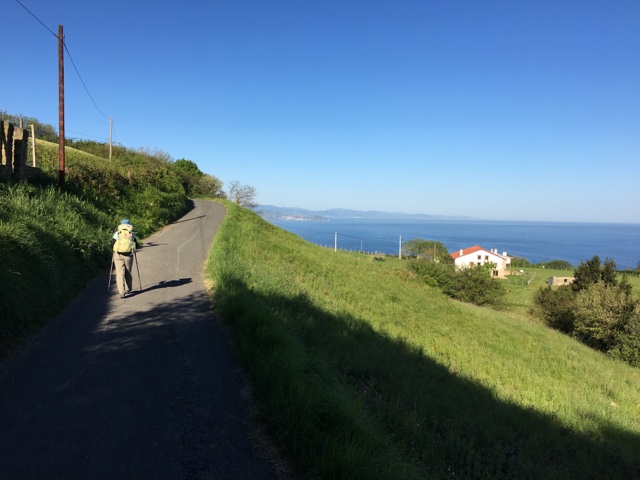 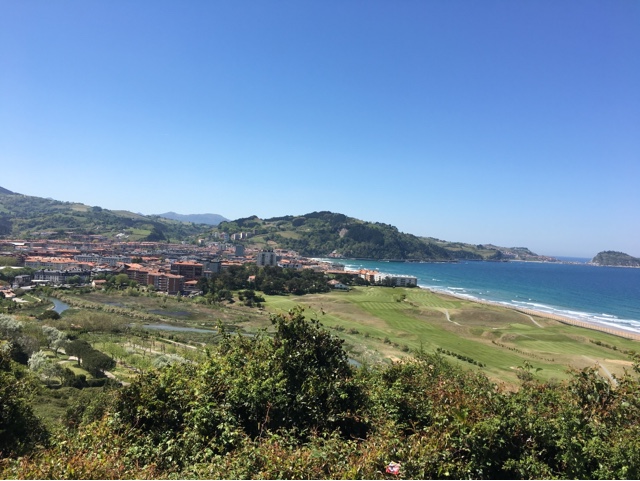