Skip to primary content
First, happy Cinco de Mayo to all my fellow alcoholic American friends that use any excuse for a good piss up.  Two months ago, you were drinking green beer and Jameson’s .  Now you celebrate your Mexican heritage. Next month, you push your luck on Juneteenth Day.  Thank God for diversity.
We had a fantastic walk today.  I realise that usually say that but it is for good reason.  I can look at each day’s walk and pick out the negatives and only concentrate on them.  Alternatively, I can keep the positives in mind and be much happier.  Yes, today had a little sprinkling of rain over the last hour.  It was very sunny and hot for other portions too.  So what?  The trail today was half on beautiful tracks and trails.  We often had a stiff breeze cooling us down.  Some of the views were again spectacular and some were just so tranquil.  We met several nice people along the walk today and lucked into a good place to sleep.  With so many good things about the day, it’s a waste of time to thing about the bad things. 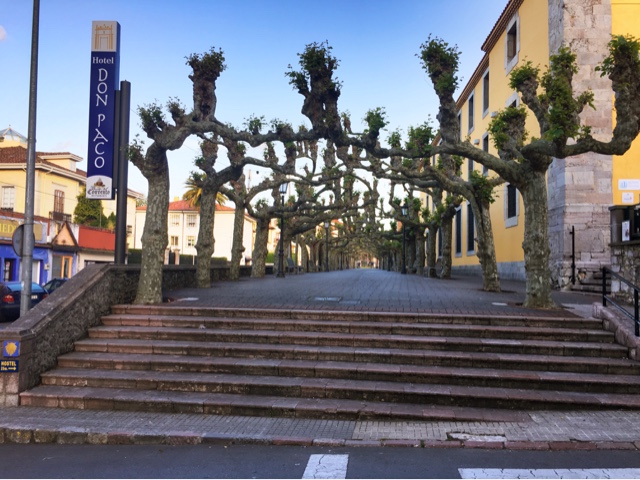 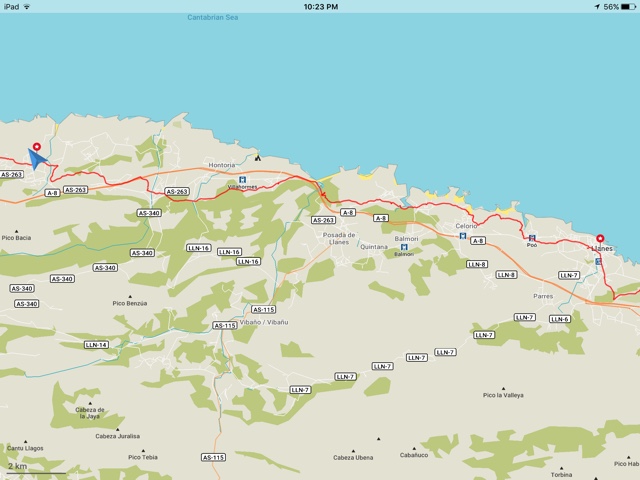 We enjoyed the walk out of Llanes mostly because it went through only city streets  and residential areas, nothing industrial.  Also, breakfast was available at the building next to our hotel so at 8:00am, we started walking on a somewhat full stomach. Some of the old houses in Llanes are absolutely beautiful.  As soon as we were out of the city, we were on a nice trail to the nearby suburb of Poo.  No, I am not kidding.  And, yes, they have heard all the jokes already. 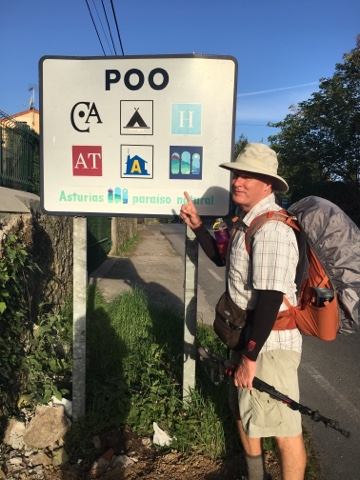 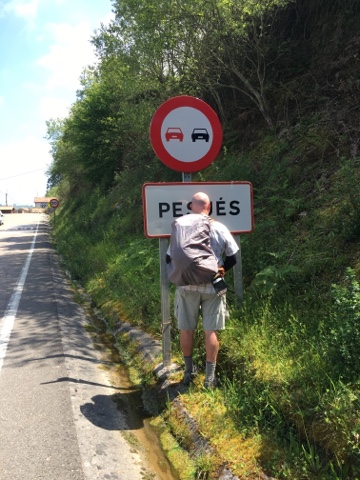 I had to include both photos.  I am such a child!

After picking our way through Poo, we followed the arrows out to the coast and enjoyed the breeze and views of the sea as well as some ruins.  We then edged around the village of Celorio near the beach and found a bar that was open for the first pee stop and second breakfast of the morning. 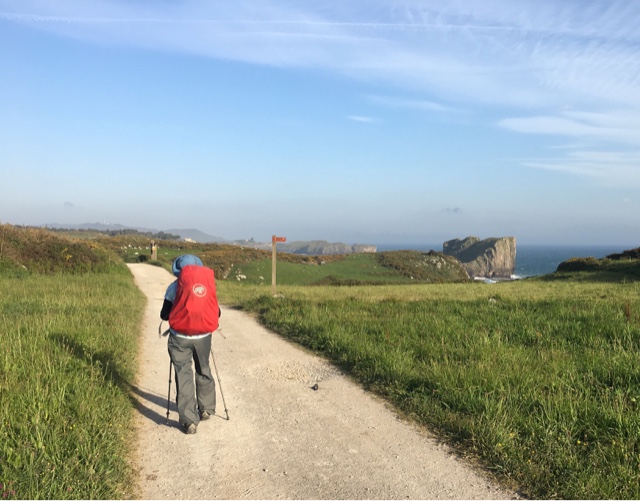 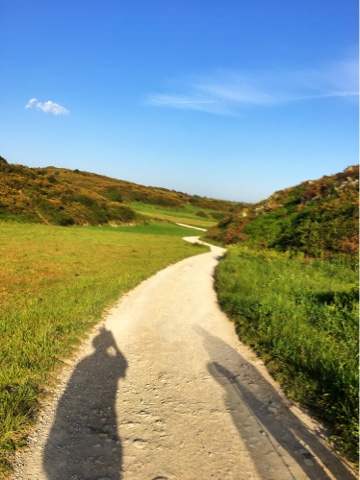 On the road near Barru Beach, we were passed by the three Spaniards from yesterday and it turned out that one of them is actually Italian.  Whenever they come to a point where the trail direction is not obvious, they all gather round for a mini-conference with some animated gesturing.  Just behind them were a Romanian couple, walking to Oviedo.  All five of them zoomed past us after a brief photo-op with a horse. 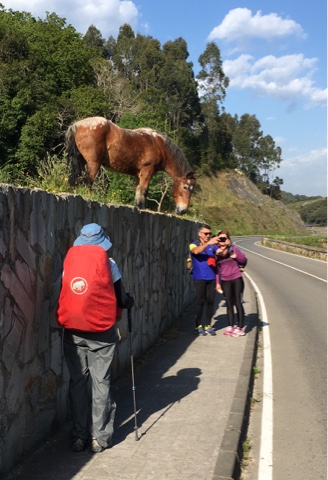 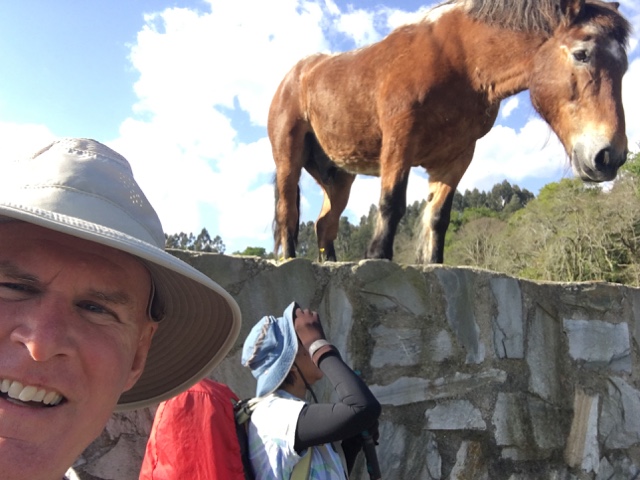 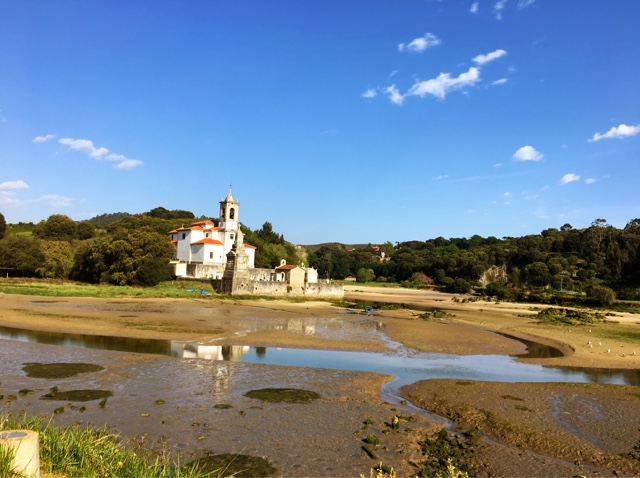 Soon we had a couple of more kilometres of good trail walking where we were passed by two young Polish boys who literally ran down a long steep gravel path.  We never saw them again but after a quick stop near the abandoned Monasterio San Antolin de Bedón and a short path along a highway, we stopped for a lunch break in a good bar in La Fonte.  There we found the Spanish / Italian crew and the Romanians resting and eating too.  We had some nice conversation with everyone as well as an apparently local woman too.  One of the Spanish men was speaking to her and translating for everyone else.  Soon, we were also joined by a Scottish woman we had met briefly earlier in the morning (wasn’t she far in front of us???) and a Canadian woman.  Melanie tried to speak with the Spanish lady and at one point, the woman stopped her and asked in the thickest Scottish accent I’ve heard for years “Lass, dae ye speak English ah all?  She’s A Scot who has been living in Spain for 18 years.  She then got talking to the Scottish pilgrim and no one could understand another word from them. 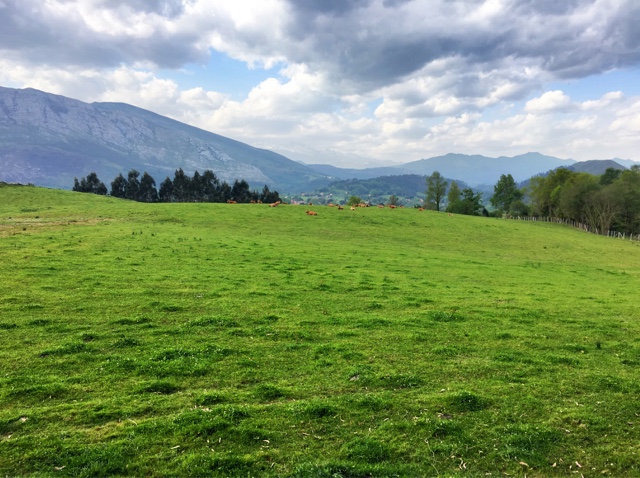 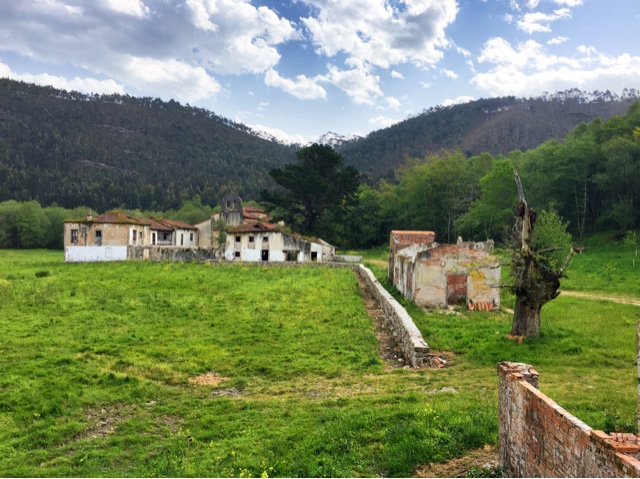 After lunch we had a few more kilometres of trails and dead quiet country roads all the way to Nueva.  This town was amazing for two reasons.  They seemed to have several cool looking accommodation options and they also had at least a dozen open – and fairly busy – bars.  I guess that number isn’t so amazing by itself but it was amazing that Melanie and I walked past all of them without stopping! 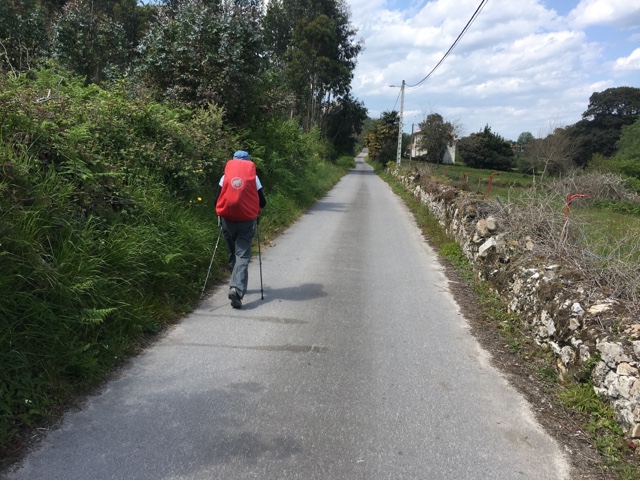 After another kilometre on a trail paralleling a highway, we had about 5km to go to get to Cuerres.  We passed a neat house with unique and clever window flower posts and then hit a trail that had a sign at the bottom that said “do not climb this trail when it is raining; follow the road”.  Now, it had been sunny all day but the clouds did seem to show up just before this point.  With the note though, I took a good look around at the sky and proclaimed “It’s a bit cloudy but those definitely aren’t rain clouds”.  We walked about 400m up that nice dirt trail thinking the whole way “yes, this could get quite muddy and tricky in bad weather”.  Just then, the heavens opened up the faucet and the rain began.  We scrambled to get our rain gear on, race up the rest of the path, then across the field of cows to the church on the hill.  Where do that come from? 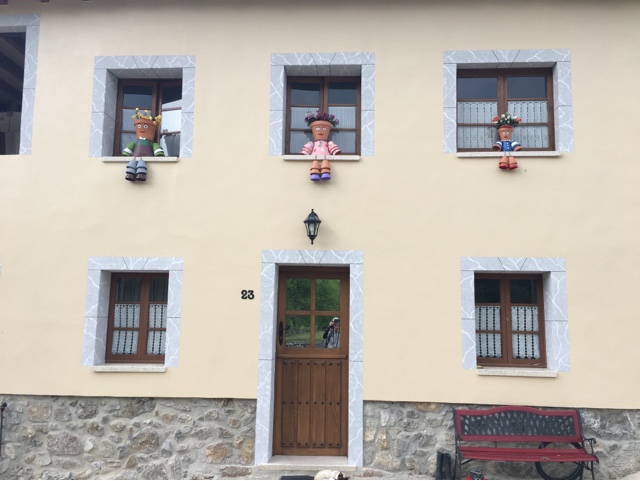 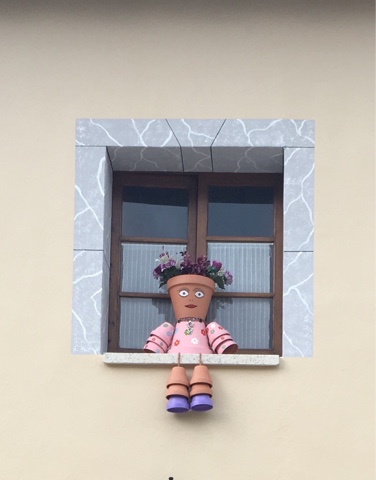 We had a Spanish – Italian style conference on the porch of the church under cover.  We decided that the most direct route for the final 2.5km was not going to be easy to walk in the rain so we would follow the arrowed trail.  We passed by some interesting Camino rock art and a medieval bridge but otherwise, just hurried along in the start / drop rain. 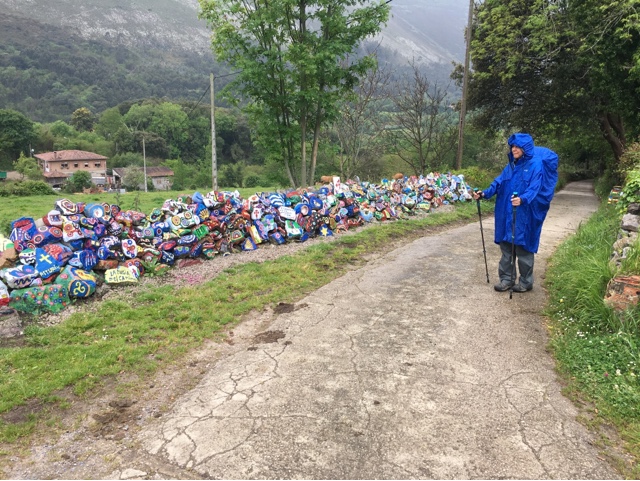 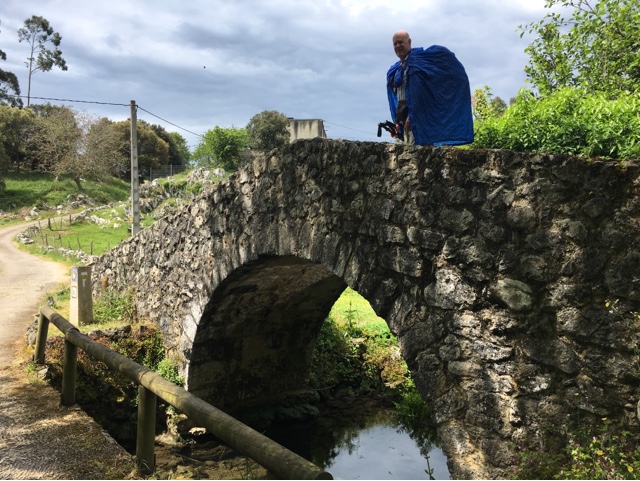 Our “hotel” surprised us greatly.  The Villalen is much more what I would call a bed & breakfast but it is very nice and a room is 50€.  The couple that run it are also very helpful, even driving us to a restaurant for dinner as well as picking us up (which was back in Nueva, the closest place). 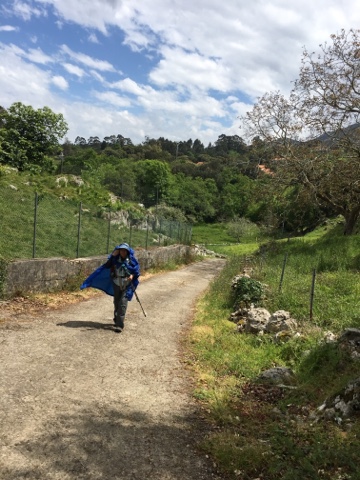 Finally, for dinner we were brought to a sidereria for dinner and the hotel owner came in with us.  He suggested (insisted? demanded?) that we order some cider (what they are famous for in this region).  What the heck Melanie says, so we will have a glass.  Hell no says the bartender, we serve you by the bottle.  Uh oh.  He uncorked a wine bottle sized bottle, raised it high above his head and started pouring into a glass he held near his knees.  An inch of frothy apple cider was given to each of us and we apparently needed to drink it all in one go.  Boy, was it strong.  The problem was that every few minutes, the bartender would repeat this process from – as I understand it now – “our” bottle.  I only had two questions.  Who was going to carry me out of the bar after I passed out and just how much is this whole bottle going to cost?  Well, I did get pretty buzzed and developed a taste for it pretty quickly.  Also, I found out that a bottle of this hooch was 2.50€.  I can afford that even when I’m sober.  Happy Cinco de Mayo to me. 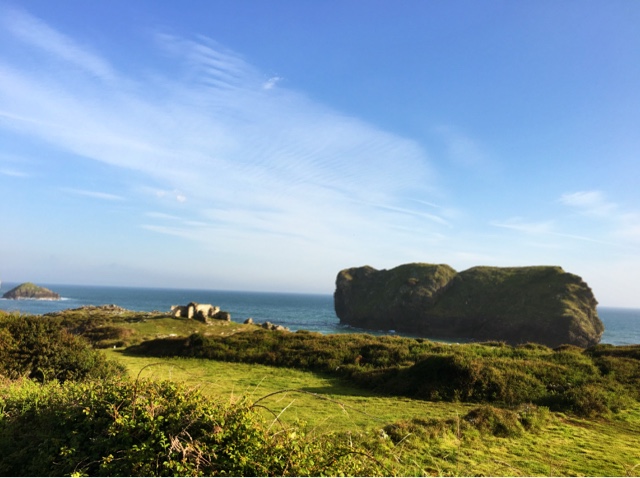 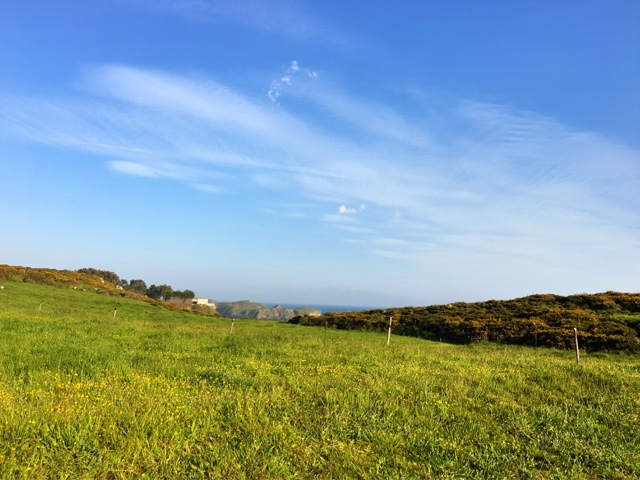 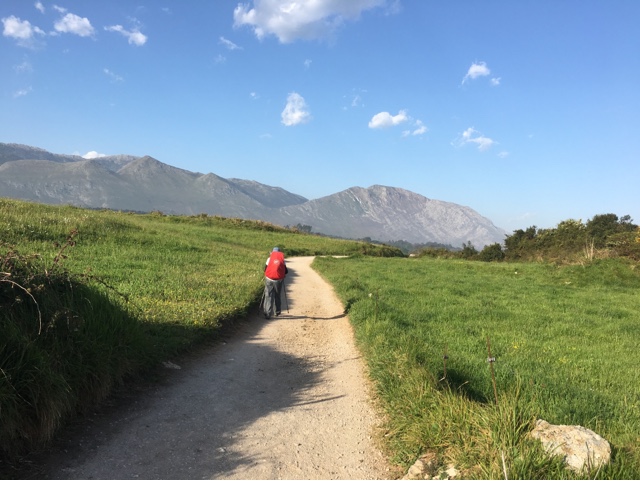