Today began a new way for us. We have lost our Camino family. Jerry, Daniel and Anna-Marie always said that Castres was their last stop. Jerry took a train to Toulouse this morning and will catch a train to Paris Charles de Gaulle Airport tomorrow. Also, when we came down for breakfast this morning, we were delighted to see Alain, who we missed yesterday. Unfortunately, he is ending his walk early due to knee problems and headed back to Marseilles by train just after breakfast. He was actually having to get a connecting train through Toulouse but he was on the 9:00am train and Jerry was scheduled on the 10:30am train. It was too bad that they missed a final journey together. 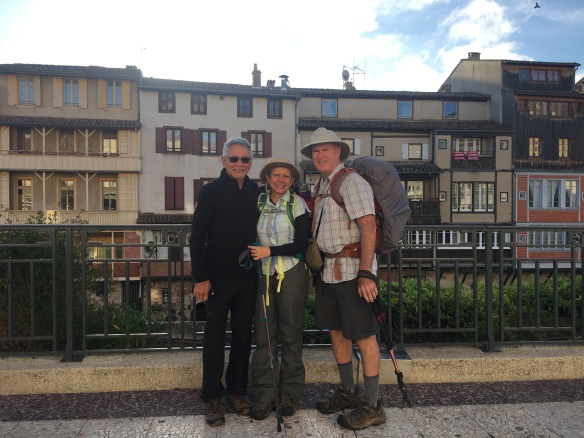 After a picture of the three Singaporean Camigos across from the hotel, we said our goodbyes and headed off to a lonely walk out of town at 8:20am. The first kilometer was a great walk along the river which made for one of the best exits from a big city I think I have ever had. We still had to get through the suburbs so there was a lot of road walking but we were done with most of the busy roads by the 3.5km mark. 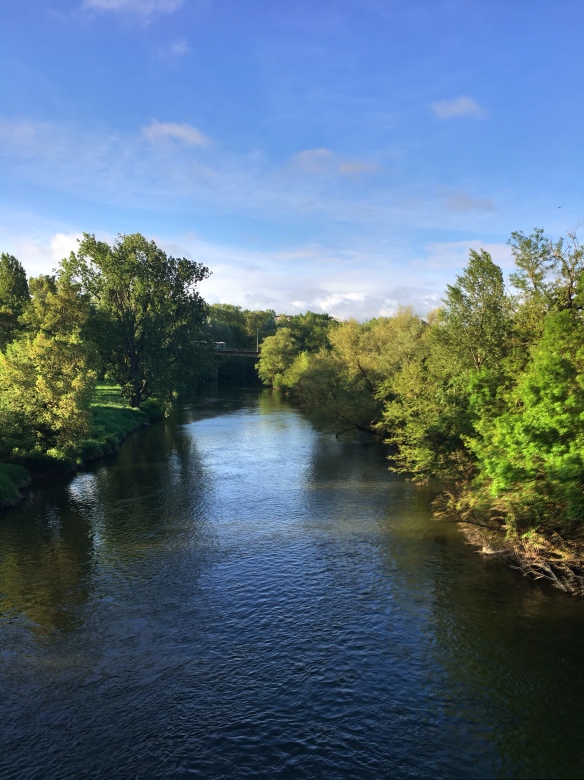 Not long after that mark, we passed over a train track and I wondered to myself. I checked the time. It was exactly 9:00am. Could this be the track that Alain’s train would be coming through? It looked like it could be. Nahhhh, I’m not standing here waiting to wave, in the rare case that he happens to be looking out the window as it passes. We kept moving. We passed under the train bridge, then along road bridge that ran along side of the rail bridge, then we crossed the rail line again. I jokingly looked down the tracked and waved. We kept moving. 50m or so further down the Camino, at 9:15am, we heard the ringing for the warning that the train was coming through and the road barriers were coming down. Like little kids, we ran back to the crossing and waved our hands off with silly grins on our faces as the train passed by. Was that Alain’s train? At the time, I gave it a 30% chance. Was he sitting on a window seat on the right side? That’s a 25% chance. Was he looking out the window as he passed? I’d give that a 10% chance. That makes it about a 0.75% chance that he “could” have seen us. There is no telling if he actually did but I can hope that he did and put a smile on his face. By the way, all the car drivers waiting for the rail crossing to re-open we’re laughing at us but that’s okay. They would never understand Camino friendships. (Edited to add: I just checked the map. There is no way that train went to Toulouse. Too bad.) 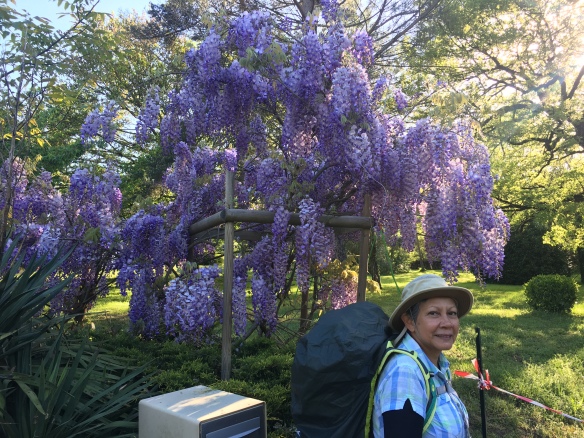 The trail was very flat for most of the day with a few small, sharp hills. We could easily move faster than the past 12 days in the mountains. With a lot of road walking, it also helped with our speed but I hate walking on roads and risking getting blisters. We did have some nice forest trails but today was more walking through farming land as we got away from Castres. 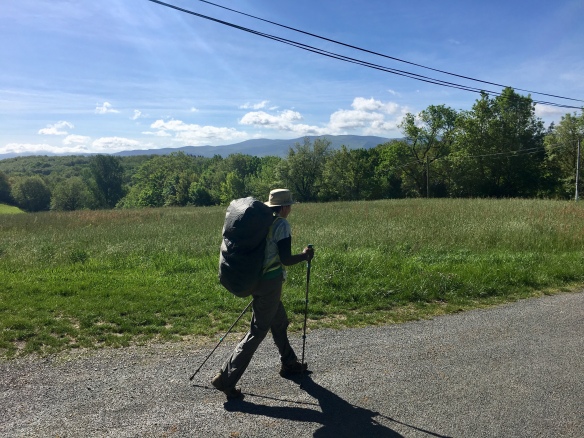 Today’s walk also returned us to a favorite feature of walking through the occasional town. After about 11.4km, we arrived at the center of the sleepy little Viviers-lès-Montagnes. After asking around, we were directed down the hill from the 15th century church to the main road. There we had a choice of a bar or a patisserie. The patisserie will win that battle every time for me. A Fanta, a coffee, a great chicken sandwich and a delectable pastry later, we were walking again, refreshed and happy. 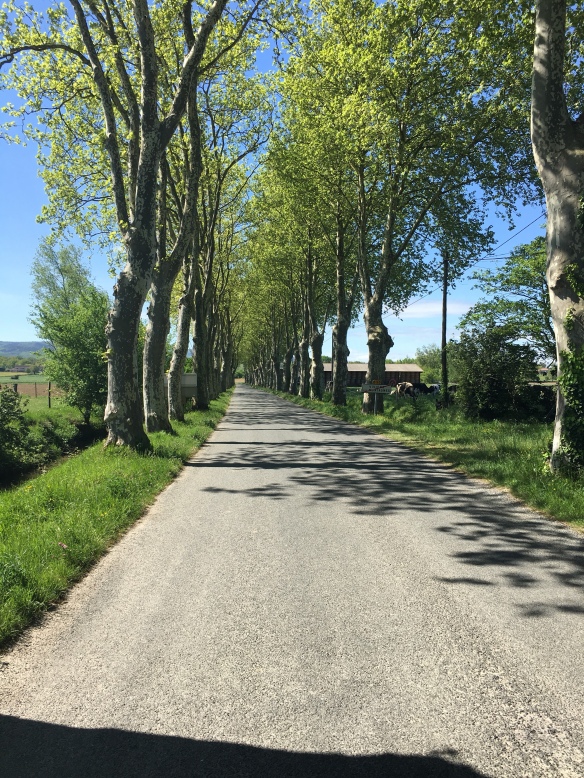 Another stop in Dourgne at 2:30pm took too long and too much out of our pockets for a pair of lemonades but again, we were refreshed for the final 4km to our chambres d’hotes. For those following us, make sure that you follow the blazes after Dourgne. It’s a new route and it is mostly off the busy main road except about 200m. Taking the slightly shorter main road would not be worth it. 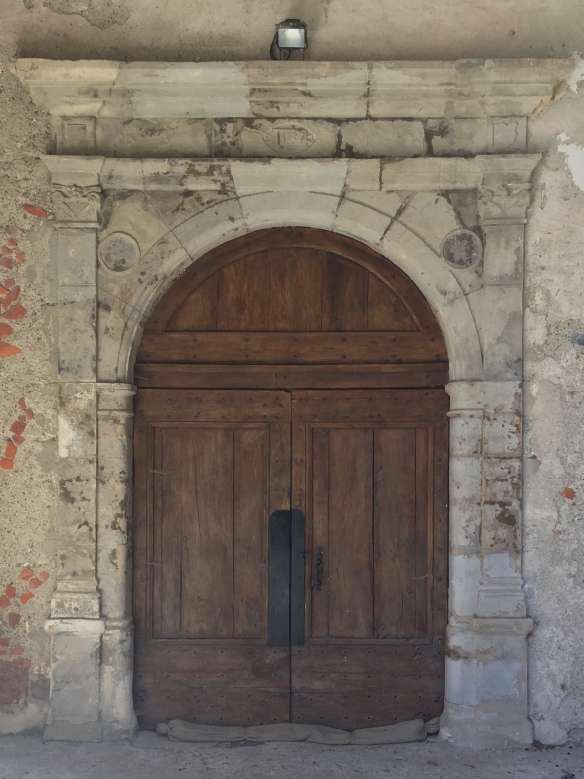 As we walked off the trail to get to St. Amancet and our beds tonight, we weren’t exactly sure where we were heading. We had the name of the lodging “Loroc” and the name of the village without any street or house number. When we entered the village, I kept my eye out for signs and aimed for the village square. Melanie wanted to stop and ask at almost the first house we came to but I said there will surely be a sign for the gîte. We got to the town square and saw nothing so I called the owner on the phone. She said she would come and fetch us. As we walked back to her house – by the exact route we took into the village – I avoided eye contact with Melanie. Sure enough, Isabel took us to the exact house that Melanie wanted to stop at earlier and ask for directions. There was a small sign on the wall but you had to get to the gate to see it. Oops. 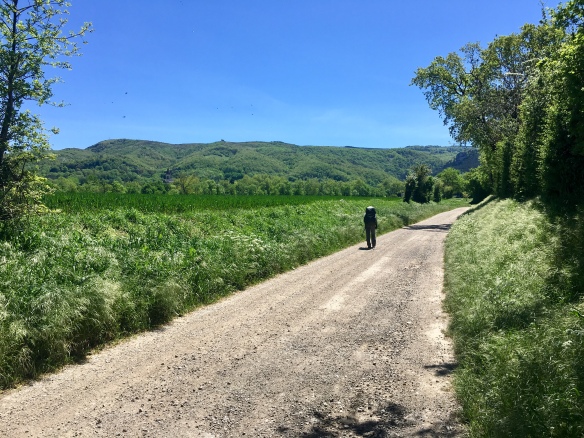 Another note from our hosts: Isabel likely speaks perfect English but she insisted on speaking slow, easy French so we learn. She must have been a teacher because she is patient and gentle in correcting me as long as she can understand what I am trying to say. She told us that she does this because there are four English couples living in the village and one of the couples, who have lived here four years, has not learned a single word of French. She is disgusted by that.

We are off to dinner now so I have to run. The family treats us here and we just join their family for dinner. 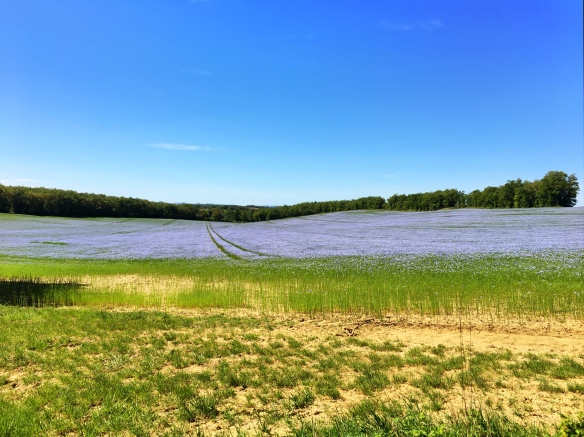