I thought today’s walk and post were going to be incredibly short. Both got longer after 12:00noon.

The plan today was to make a simple 13km walk to where we were supposed to sleep last night, Gîte La Grange, near Giscaro. We said that we would play it by ear if we walk any further but the short day should help Melanie and we committed to staying in La Grange anyway. I was, however, eyeing a shorter path to the town of Auch, that could catch us up one day if we could manage that tomorrow. It’s 37.9km to Auch from La Grange but walking smarter can make it manageable.

With the short day, we slept in until 7:00am and a leisurely breakfast before doing some research. We could not arrive too early at the gîte so we only set off at 9:00am. Funny thing though, it was raining as we stepped out the door. That wasn’t supposed to happen.

We put on our rain gear and headed down the road. At the first turn where the Camino left the road, we saw nothing but mud. Forget that. Checking the GPS, we decided to head down the national road further and look at the track where it crossed the road again. The national road is a fairly busy road with one lane in each direction an occasional side walking paths or wide shoulder. The majority of the time, we walked on the road, on what appears to be a narrow marked lane, possibly for bicyclists.

With all the rain, we spent the whole walk watching the passing cars and trucks to figure when to jump out of the way. We stopped at one house to get a little cover and check GPS and the nice owner came out and invited us to go out back and hang out under a nice big dry shed. Further down the road, just about the point where we had to turn into a path to head down to the gîte, a car pulled over to us. The driver got out and asked “Michael?” It was Andreas, the gîte owner. He suggested we stay on the main road a further 2km and turn at his yellow sign. He warned us to take care though as the road can be dangerous.

That would be the end of the story but as we arrived in the gîte, a fellow German pilgrim who was taking a rest day, showed us around as the owner was away. I was keen to chat with Melanie about whether she was able to walk further but the German was having none of it. He insisted that we shower first and we should not walk further. He said that “we” (the “three” of us) could discuss it after our shower. Huh? I explained that we were trying to make up a day and the 37km to Auch could be managed with some shortcuts and some more walking today. He said I was wrong. What the heck? Who is this guy?

I blew him off and eventually got to speak with Melanie alone. She was still not 100% but much better. She said we could easily walk another 7km to Gimont if we could eat a lunch there and take a taxi back. Great, let’s go!

Betty, from Léguevin, was also also in residence as she was taking a rest day as well. It was good to see her but I thought she was in a hurry to Lourdes.

Just before we left, the owner’s wife came in and introduced herself. She was very kind and inquired about Melanie’s health. We explained our plan and asked if it was possible to get a lift to Gimont in the morning. She said she would be happy to but she thought it was a bad idea. Oh no, here we go again. She started to lecture me about taking care of Melanie’s health. I let Melanie decide what is good for her. Then I accidentally, mentioned we walked on the national road and all hell broke out. The lecture took a sterner turn about how we should never have done that. That was enough for me. I was ready to put my bag on and leave. It would have made more sense to walk the whole way to Gimont or further anyway. 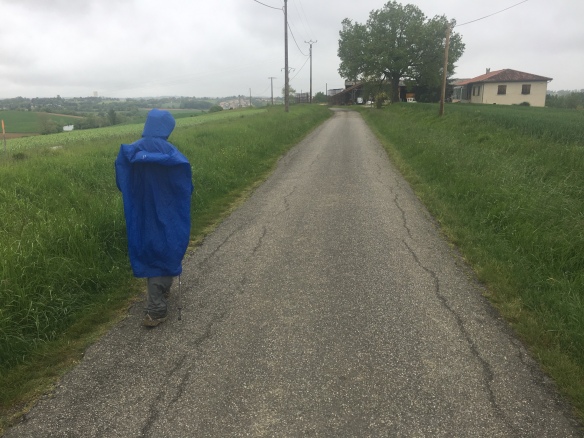 Melanie has a cooler head than me and just nodded. Then we left for our walk to Gimont and my time out period. I was steaming. I haven’t been scolded in far too long to start hearing this crap twice in a day from a pair European strangers.

We took the back way to Gimont, the first kilometer on wet grass and then thick gooey mud that caked on our shoes to double or triple their weight. That’s why we walked on the road. The rest of the way, we used back roads, both on and off the marked Camino and it was as easy as apple pie. The rain stopped for most of this section and without our back packs, the 7km was quickly covered in 80 minutes. We found a lovely patisserie there for a lunch salad and we found a taxi just outside the door. Life is good.

Back in the gîte, we found three more pilgrims had just arrived, two British men and a younger German man. All of them were just about to get in the shower so we were in a longer queue than expected. That’s okay. The more the merrier. I expect more snoring tonight though.

^our beds for the night as well as our neighbors.

Your prayers for Melanie are working. Please keep them up for another day or two though. She still needs some energy for tomorrow. Thanks.

ps, only in France would you have a vending machine for bread in case the bakery is closed.