Well that was fun! After our “lunchfast” yesterday, we did not want to miss breakfast at the fancy hotel with three rooms this morning. Because it was Sunday, they didn’t serve it until 8:00am but that was okay with us. We slept in until 7:00am and enjoyed a leisurely preparation for the day.

We knew the day’s forecast from last night but upon looking out the window, I would say that Mauléon takes the term “intermittent showers” far too seriously. Melanie looked out the window first and said it had obviously rained last night but was just very overcast now. Five minutes later, I looked out the window and it was pouring down rain. In another five minutes, Melanie checked and it was bright and sunny but with clouds on the horizon. Five minutes after that, we gave up because it was bright and sunny AND pouring down rain at the same time! That was the theme for the rest of the day. I didn’t actually count but I would estimate that it “started” raining about 60 times while we walked. 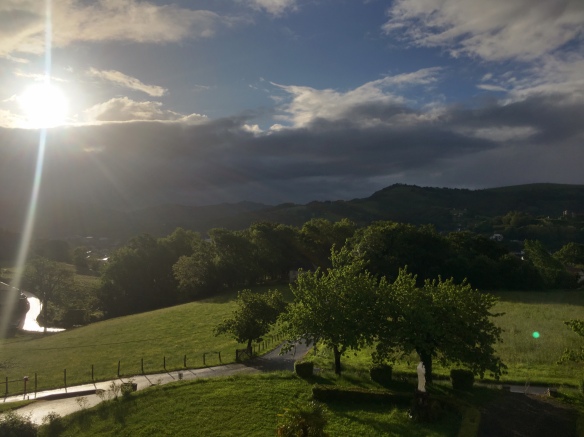 With weather like that, you shouldn’t be surprised that we took the road again. Yesterday, when we arrived at the hotel, the receptionist said we were right to have taken the road to Mauléon as pilgrims had arrived the past several days complaining of having fallen in the mud, twisted ankles, covered in muck up to their knees, etc. That was good enough for us. Today’s trail was supposed to be 23.4km, mostly hilly with one steep 400m ascent and descent. We plotted a path on a couple of roads that was just under 21km, mostly hilly with one gruelingly long ascent of 360m and a steep descent on the other side. We knew, if the weather was good, that we would have some fantastic views from the roads whereas in the forest, usually we only are looking at the mud and the trees around us. 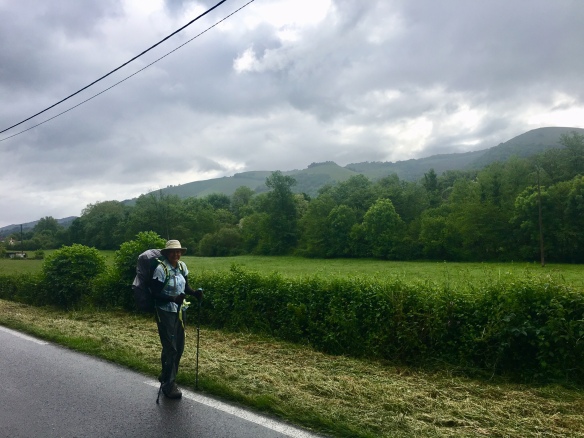 The first 6.5km went very fast as that was quite flat after coming down the hill from the hotel. That is when the clouds decided it was time to start playing with us. It started to drizzle and Melanie put her raincoat on. I just changed to my rain hat and held my coat in my hand. Sure enough, within three minutes, I was applying sunscreen on my face, arms and legs. For the next 1.5km until the restaurant Le Chistéra it alternatively drizzled rain then sunshine. We stopped at the restaurant for a coffee/juice and a toilet break and while we were there, the real rain started. Once again, I had decent cover to put on my rain gear. 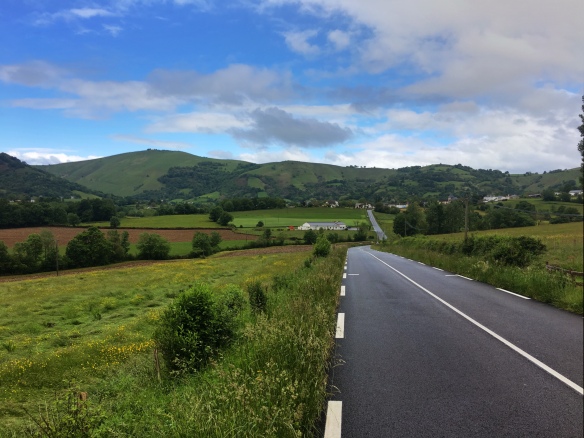 A kilometer or so after that – and ten changes in the weather – we reached the village of Musculdy where we started a long 5km ascent to the Col d’Osquich at 495m. Normally, a climb like this would not bother us at all but we have had so many flat days since Castres that this seemed like an endless climb but, in reality, was only about 5km and averaging about a 7% incline. Again, the weather changed dozens of times as we walked. It was always cold and damp though but with lovely views. When the rain let up, I would always try to take a quick photo before it started again.

Just after the Col, there was a restaurant, Bista-Eder where we decided to have a small lunch since dinner was questionable tonight. While sharing a salad and hamburger, we had a great, as well as warm and dry, view of the clouds rolling in lower and dumping the heaviest rain of the day. I was very happy to be inside for that. It was still raining some while we left and we were now walking in the clouds. Our hands were quickly turning into ice but we knew we were descending and would feel better once out of the cloud. 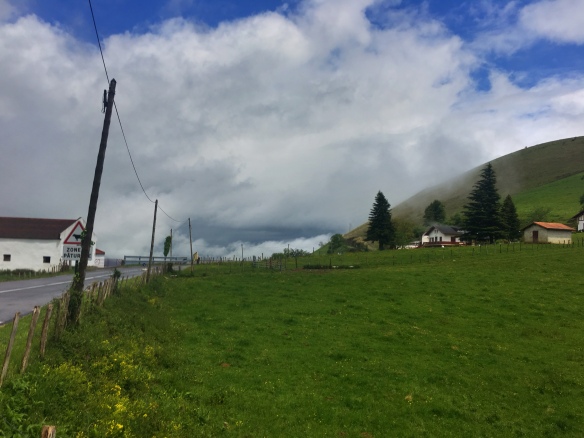 About 1.5km after the restaurant and just a little after the restaurant Col d’Osquich, we finally turned of the main road (with one car passing us every minute) to a farm road (with one car passing us the whole 5km into Saint-Just-Ibarre). That road went very steeply down into the valley and added some distance but it was nice to be off the main mountain road. By the way, the main road averaged one car per minute but that includes the parade of 30 or so cars that passed us at 10:05am, all headed in the same direction. We figured that there must be a Sunday mass in the next village and they were all either five minutes late or early for a 10:30 mass.

We are now settled into the chambre d’hôte Dominicateya. If you are following us and only have the name of the place and phone number, don’t be fooled. It’s more of a gîte than a chambre d’hôte. Also, there was a lot of discussion last night about whether there was a restaurant or grocery store in Saint-Just-Ibarre or if dinner can be provided at the gîte. The answers are no, no, and no, at least at this gîte. At this place, there is one room with a single bed and three rooms with doubles. Sheets, towels, blankets and heat are not provided. It’s appropriately priced as a gîte in France (€14/person) but we booked it without knowing the price and believing the “chambre d’hôte” title.

When we left behind Pete, Les and Peter in Oloron-Saint-Marie, we figured that we would be having a lonely walk into St.-Jean over the final four days. You never walk alone though, on the Camino. In the first night after Oloron, in L’Hôpital-Saint-Blaise, we stayed in the gîte with three French speakers. One is a Swiss guy who is walking from Lourdes to Santiago. He is a serious walker, just retired, fairly clued in and speaks a bit of English. There was also another French couple, Nicole and Gerard who are very nice but speak little English. I didn’t expect to fall in with them but, as always, Melanie made friends with the wife and soon we were having dinner with all of them. In Mauléon, we ended up in the same hotel as the couple so we had breakfast with them this morning. Also in Mauléon, we sat with the Swiss guy at dinner and found out that he had walked up to the monastery/hotel where we stayed only to find out it was full. He came back to the municipal gîte but by coincidence, ended up at the same restaurant as us for dinner. Today, all three of them showed up at Dominicateya too. I guess we are a Camino family. Finally, young Maltese/Spanish Carlos showed up at the gîte at 7:00pm after walking the marked trail the whole way today. He said the mud was awful and he fell twice while going through some cow gates. He managed to catch himself but he was rattled. As he had no food for dinner, we shared our pesto pasta with chorizo with him. He is now the child of the family.

As I said, all of them are nice but I nearly threw Nichole out the window this afternoon. I had just gone in to use the only bathroom and I needed to do four things: pee, wash our clothes, shower and shave. As we were the second to arrive and Swiss and Melanie had both finished in the bathroom, I thought I had some time. How was I to know that about 30 seconds after I went in there, Nicole and Gerard arrived? How was I supposed to know that Nichole was cold and wanted to shower immediately? I mean NOW. I had not even finished peeing when there was a rattle of the door knob. I said that the room was in use and started to move with more urgency. Two minutes later, the doorknob rattled again, I called out that I would be a few moments. Two minutes later, while showering, I heard the handle rattle again but I ignored it. Who can’t hear the shower running? I swear my shower lasted less than two minutes and darn if there wasn’t another knock at the door. I shouted this time that the room was occupied and prayed that whoever it was knocking would be standing outside when I walked out naked, dripping wet, unshaven and carrying dripping laundry. I decided to put a sarong and shirt on before going out but there was 68 year-old Nichole in her underwear waiting. Ugh.

I forgot to edit yesterday’s blog post regarding dinner. I had said that the only drawback of the hotel was that it was high on a hill above Mauléon. When we went downstairs for dinner, only then were we were told that the restaurant was closed for a private function. We ended up having to walk a kilometer down into town and then back up after dinner. It was good that we met Swiss. It was also good that we stopped in the nearby grocery store just as it was closing in order to buy food to cook tonight. It wasn’t good that it was freezing cold and threatening to rain. By the way, that “private function” at the hotel didn’t start before 7:15pm and was completely over and cleaned up by 9:00pm so I am pretty sure their story was BS. If they don’t have reservations, they just don’t open.

Finally, I have known for a couple of days that we are getting deeper into the Basque Country. More men are wearing berets, more people are speaking with that Russian/Portuguese accent to their French, street signs are in two languages and place names all look like they were thought up based on spilled alphabet soup. We walked along the Txorizako Erreka river today and also passed by Xarxaga peak and the village of Larregoko Maxela. Never play Scrabble with someone from the Basque County. You cannot win. 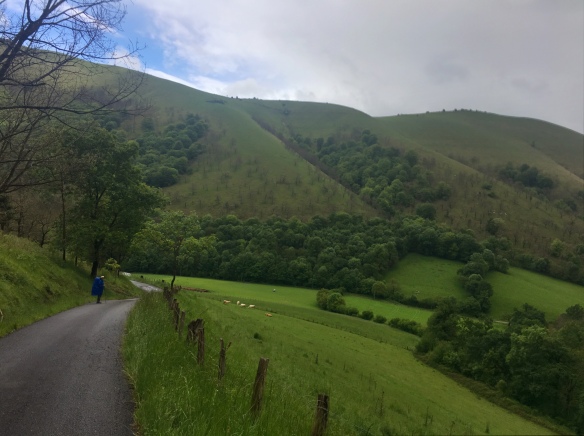