Today was a tale of two trails. The first half was wonderful. The second half, die, die, die. It turns out that we apparently missed a turn about 5km from the end that would have meant a 270m climb and an extra 1.5km trail. It sounds weird but I really wish we didn’t miss that turn.

We only walked about 100m from last night’s B&_ before we stopped for the other B at a cafe. Although Chez Adeline’s B&_ was missing the second B, it was by far and away the best place we have stayed so far on this walk. It was a perfect apartment for us with everything we needed like a comfortable bed, washing machine with detergent, a drying rack, great shower that even I fit in, fast wi-fi, etc.

Back on the walk, we had a small climb out of town on a quiet road, then a steep descent on a rocky path. Much of the rest of the first 11km alternated on unused roads and gravel or rocky paths with an excellent mix of them so we didn’t get blisters or bored. We had another climb up to the minuscule village of Saint Castor but we could find any oil. After a few more farm tracks or forgotten roads, we headed north through the hamlet of Les Gaudins where we decided to buy a really old farm house sitting in the middle of fields of lavender. Then we reached a bicycle path at about the 11km mark of the day. 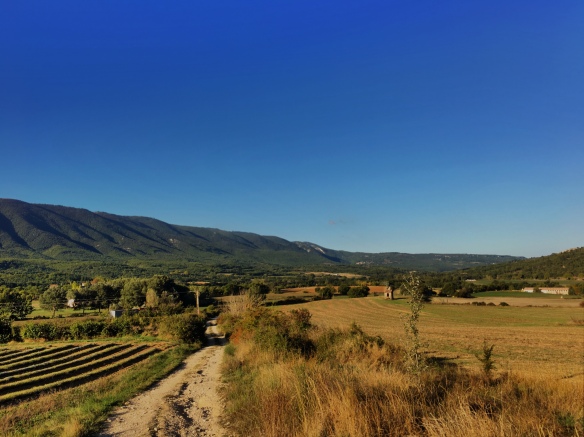 This bicycle path was obviously on the site of a prior rail line that has been paved over with blacktop. It would be very nice for cyclists. It’s awful for hikers though. This bike trail looked like it was going to take us all the way into Apt for the final 10km. That’s what the guidebook said as well as one of the two GPS tracks we had. It was always within earshot of a busy rode and usually within sight of it too. It was obviously pretty flat, usually pretty straight and often under the blazing sun. It usually didn’t have any space on the side of the blacktop where we could walk to to avoid the blacktop and problems that causes. Walking along that trail was as boring as watching someone else who is watching paint dry. After 1km, I would have sworn we had done 4km. When we got to the 4km point and realized we still had 6km more to go, I wanted to cry. With 3.8km to go, Melanie recognized that we were passing behind a restaurant or bar and, as usual, she was spot on. Since we couldn’t check into our hotel in Apt until 3pm, this restaurant was perfectly placed to give us a break from that stupid bike path as well as a place to share a lunch. The final bit to our hotel was just as boring and hot but it was on a full stomach. 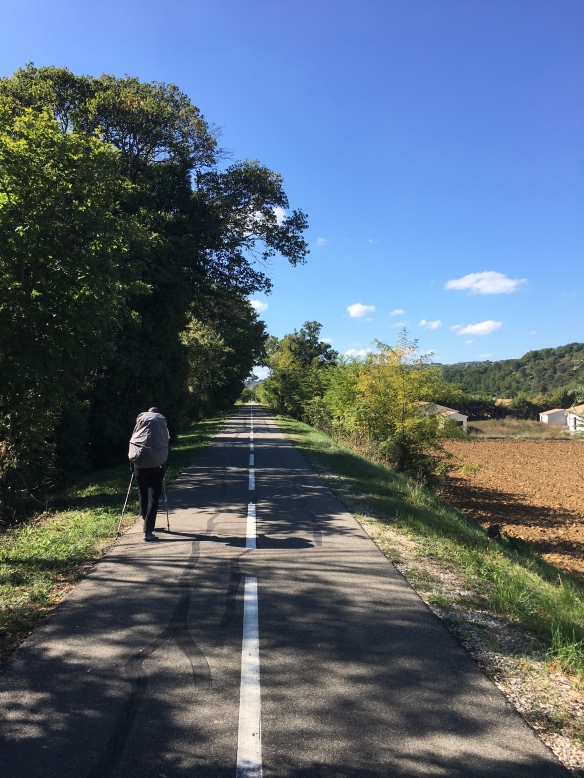 As noted, about 5km before the end of today’s walk, the marked GR trail detours on forest tracks over to the hilltop town of Saignon. It would have had a 270m climb and an extra 1.5km of trails but it would not have been boring. I am not sure how we missed the GR trail but I wish we had not. I’m no fan of big climbs at the end of the day but I would have made an exception today.

We are now sitting in the dingy hotel room that was likely only converted from a “love hotel” a year or two ago. They are obviously still working on redecoration and there is a lot to do. The pink wallpaper in the halls just has to go and the dim lighting in the hallways is actually better than the dim lighting in the rooms. People checking into love hotels apparently never needed wi-fi either. At least there are nearby restaurants open tonight.

All is good but I bet tonight that I’ll be dreaming of being a rail conductor.

We missed that trail marked in lime green

Two small climbs and a slide

And this was the good part!