It was a lovely walk today but I am starting to wonder what we are doing here. I don’t mean I am questioning my sanity for walking a pilgrimage but why are we in Saint-Christol?

This village where we are tonight appeared to be about halfway between Vauvert and Montpellier on the Camino trail so I though it was a perfect place to stop before the last day. There does appear to be a pilgrim hostel here but you have to arrive by 1pm to get in. There also appears to be a municipal gîte but it’s closed for the season. We found a holiday home type place that isn’t too bad but it’s a little out of town. We took that option before asking the important question… where to eat? There is one bar in town but it’s closed for an event and they don’t serve food anyway. There is also a pizzeria (again), a taco restaurant and a French restaurant, all closed for the season. We have a kitchenette in our apartment and there is a small grocery in the village but it’s closed on weekends and any other days that normal people would shop for food. There is a vending machine in the hall with Snickers Bars so if we can’t get a taxi to the next town, guess what is for dinner?

One final note on this lovely little abandoned village, while it is on the main Camino route, I now believe that most people bypass it by taking a marked alternative Camino path that goes pretty much directly down a main road, 30km from the Vidourle Canal crossing. I am not sure where people sleep along that way but it looks boring to me.

Our route today was mostly on Camino markings, leaving Vauvert past the bull ring arena, the train station, over the canal and down the Chemin du Moulin d’Etienne into the vineyards. We knew it was going to rain today so we both got our rain gear ready and partially on when the first few drops started hitting us here. Luckily, that seemed to scare the rain away temporarily. Soon after crossing the Vistre River, the GR signs had been recently changed, now directing pilgrims on a road towards Codognan. We ignored those markings and continued straight through a large commercial farm. That route was quite good and certainly shorter although I don’t know exactly how much so. 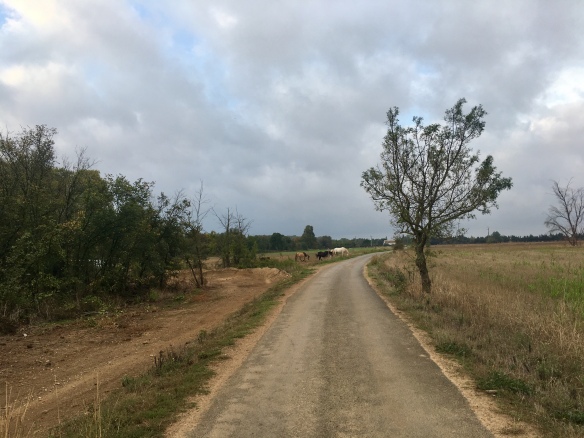 We continued on the old Camino route over the Phillipe-Lamour Canal where we again saw the GR blazes. Those led us to the village of Gallargues-le-Montueux where we stopped in a cafe for a drink just as the rain drops started to fall. We had to double back a 100m though for a snack at a bakery though, since the cafe only served drinks today. Luckily, the rain held off again but we knew we were going to get hit hard soon since the clouds were so black. After that brief rest, we shortcut the Camino trail a small bit to get over the A9 highway sooner and closer to the only bridge we are allowed to use over the Vidourle Canal.

Just after the crossing, in the village of Villetelle, is where the Camino splits and I think most people head directly towards Montpellier. We had already booked our place in Saint-Christol so we continued following those signs…. sort of. The Camino route does a loop down to go through Saturargues and Véragues before coming back up to Saint-Christol but we decided to take a straighter path through Saint-Sériès instead because of the looming rain. That route was fine except for the last kilometer just before Saint-Christol. We needed to walk in the vineyards instead of along the busy, one lane, two-direction, no shoulder road. I guess that’s why the Camino avoids that section. Once in Saint-Christol, we had a chance to scope out the depressing dinner options before heading to our beds for the night. We had time because, despite the drizzle that started again, it never did really rain today. We never needed our rain gear. It hasn’t really rained on us all month so far. I am certain that tomorrow, however, since it is our last day, will be in monsoon conditions. We’ll see.

p.s. again. We were afraid dinner was going to be Snickers Bars and a Coke. It wasn’t. It turned out to be a feast but one that cost two feasts. We asked for help from the reception where one woman was so gracious and helpful while her boss scolded her for wasting her time on non-work related matters. The nice one called several restaurants in the nearby towns but all were closed for the season. Next, she called a taxi driver to make sure he could take us somewhere, as soon as she found an open place. The driver volunteered to call a place that he knew would be open but was very expensive. Melanie agreed before she finished translating that last word. Fortunately, that place was full and couldn’t take us. “No worries” said the driver, he knew another place with excellent food and it was cheaper. We agreed because the Snickers Bars looked like they were past their ‘use by” date. As agreed, he picked us up 15 minutes later and drove pretty darn close to the exact trails that we walked today. We recognized Saint-Sériès, Villetelle and the bridge over the Vidourle. We started to worry. We hoped it wasn’t the restaurant that we ate at last night in Vauvert. We finally stopped in Gallargues-le-Montueux, the village where we stopped for a drink earlier in the day. The driver parked his taxi and walked us down to the hotel that was situated halfway between the cafe where we had a drink and the bakery where we got something to eat. What a coincidence. The driver told us he would pick us up at 9pm to take us back and then he disappeared. We had an excellent dinner but still the taxi fare cost more than the dinner. It’s okay though. He did the leg work and we didn’t have to eat stale Snickers Bars. 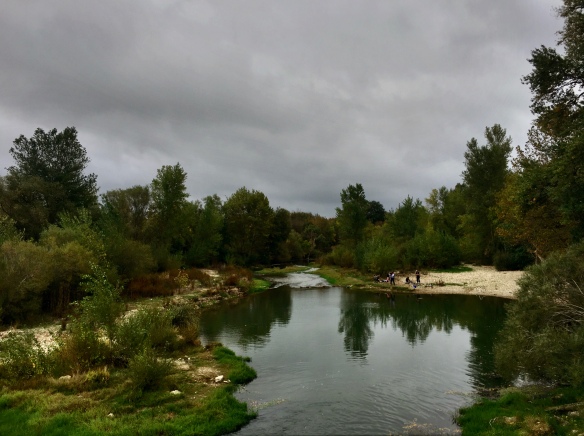 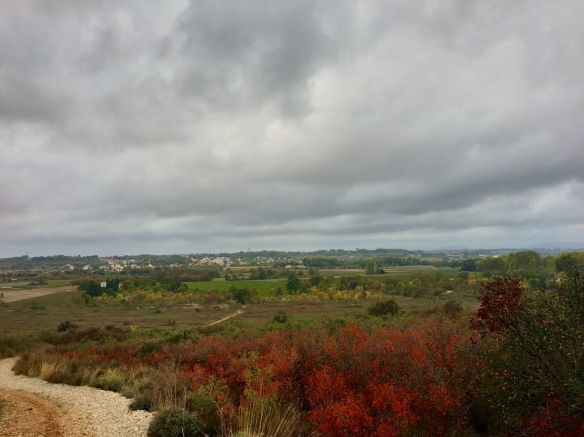