For whom the blister rises

Somehow this morning we overslept but we still managed to get out the hotel door by 8:45am. Before leaving though, we said goodbye to the Germans who were taking a different path, as always. They will be ending their Camino in Zaragoza which is a very large city so we will unlikely run into them again.

After breakfast, the second we stepped outside, the drizzling rain started. It was an odd day, weather-wise. The rain sputtered and spat all day long but the sun was also out in the afternoon. At times I did not know whether to reach for my sunglasses or my raincoat. Sometimes I actually did both.

The first 7km along the flat path went by very quickly and we felt very strong by the time we stopped for a first snack and toilet break in the town of Torres de Berrellén. Just before going inside though we met two older women who stopped to talk to us. They were not very impressed that we were walking to Zaragosa today. One of the women said it’s only four hours from here! Hmmmm, not if you stop every few kilometers to eat, I thought. After a juice and open faced fried quail egg & anchovies sandwich, we were off again. 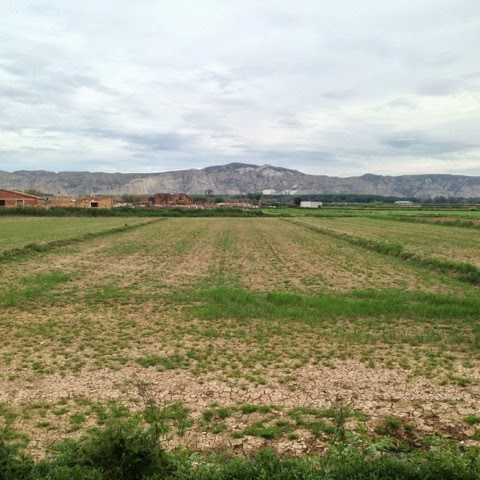 In the next town of Sobradiel, a few kilometers away, we just sat down on a park bench in the spitting rain and ate a pear and apple that we had bought a day or two ago.  Fruit tastes so good in the middle of a Camino.

Before reaching the next town of Utebo, we had to cross the highway on an overhead bridge. While crossing that bridge we ran into seven Spanish pilgrims heading the opposite way to Santiago. It’s always good to meet fellow pilgrims on this Camino and I’m seeing many more than I expected to. 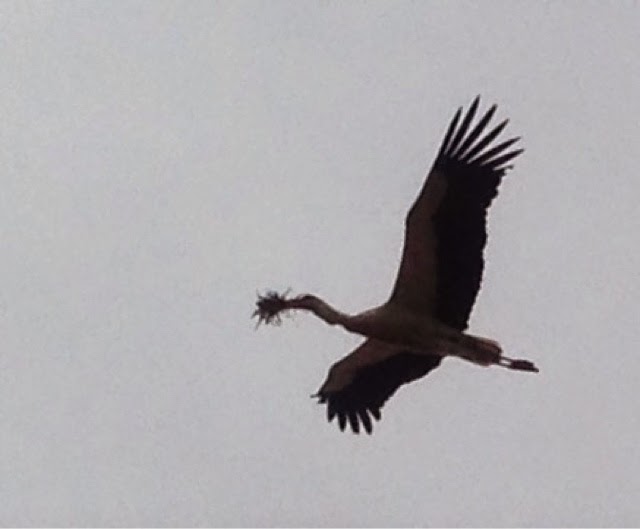 In Utebo, around the 15km point in today’s walk, we stopped in the bar next to the church as it seemed to be the only one open. A wedding had just finished in the church so we managed to visit that as well. The inside of the church was a lovely small parish church for Spain but the stunning portion was the bell tower, completed in 1544, which looks amazingly like an Arab mosque minaret. We later met a priest who gave us a stamp for our credentials and who also told us that the church was built by descendants of Muslims who had decided to convert to Christianity and stay in Spain when the rest of the Muslims were expelled. By the way, the bar only had pintxos so we had a little bit to eat and drink but then moved on to the next town in our buffet, I mean Camino. 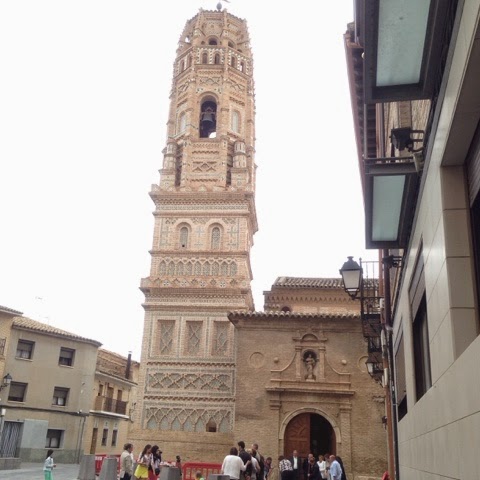 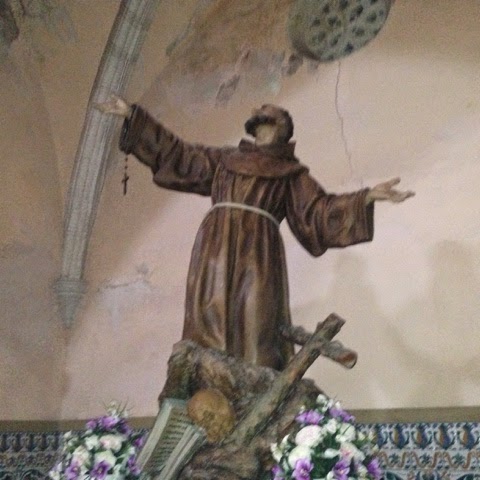 Three kilometers further on, in Monzalbarba, we hit pay dirt in the Casino Bar. Not only did the bar have bocadillos (long sandwiches on a loaf of Spanish bread) but they also had a bartender who was happy to practice his English which he told me was his best subject in school.  After making us a “Philadelphia & salmon” sandwich we got to talking about the Camino. Before we left, he gave us a bottle of wine. I’m not sure he understood the pilgrimage (and the fact that we would have to carry the wine at least ten kilometers), but we greatly appreciated his generosity. 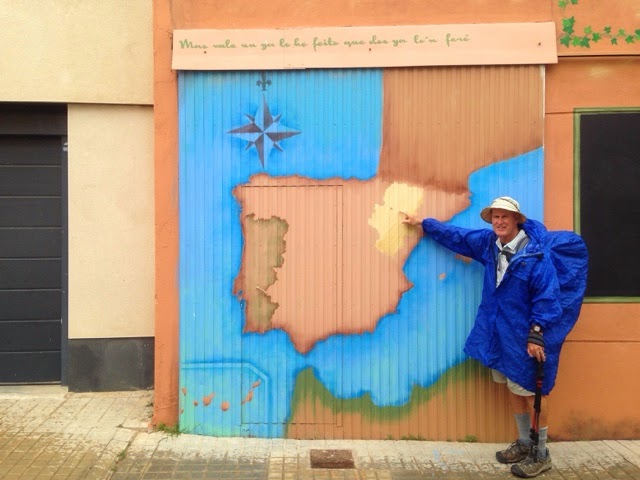 Replenished and 1kg heavier, we were on our way to the final 10km to Zaragoza. Suddenly, Melanie’s pace picked up for the first time today and I was jogging next to her at 11 minutes/km for the next seven kilometers. Just as we hit the outskirts of Zaragoza, we ran into trouble.

For those following us, take note. The GPS trail takes us through the old parking lot of the Expo 2008 site. Unfortunately that parking lot is now closed and fenced off. We managed to find a way in through a gate and we went in because we were not sure where walking around the fence would lead. Once inside the fenced off area we tried to go in the direction of the GPS but the other side of lot was fenced off as well. We did find a way out though through the main bus station and with the GPS, it was easy to get back on trail. Unfortunately, that also deflated is a bit and the last 3km into town was a real slog. 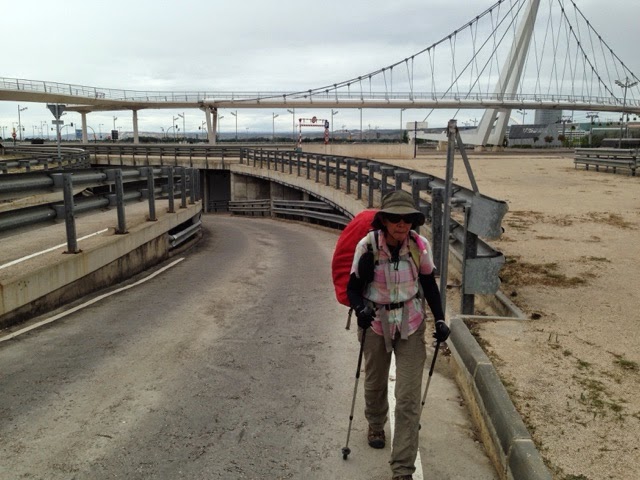 After settling in at the Hostal Inca in the old section of the city, we walked over to see the incredible Basilica of Our Lady of the Pillar. The original church on this sight, while not nearly as stunning and grand, does have a claim to fame, being built about 1970 years ago and being the first church in the world dedicated to St. Mary.  Rumor has it that St. James the Apostle (Santiago) himself was the person who directed that the chapel be built after an apparition he witnessed. Google the church. It is worth it. It is probably the grandest church I have ever seen – and keep in mind that I have seen the most impressive church’s in Italy, Spain, Portugal, France, Germany as well as many other countries. 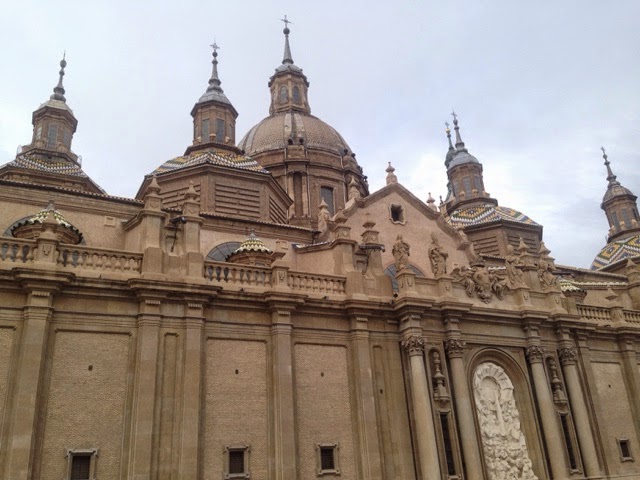 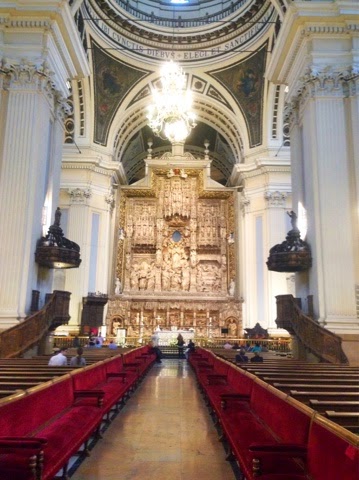 Finally, I have to mention the pilgrim’s meal that we had for dinner in a Spanish restaurant which was run by a family from Shanghai. Melanie and I used as much Mandarin as we could to make the waitress less nervous. Melanie also asked what one dish on the menu was and the woman ran off for help. She came back a minute later and explained “it is “roas”, “ROAS”!  “R – O – A – S”.  A light bulb went off and we Melanie and I both said, “oh, a roast!’. Ten minutes later (after finally relieving Melanie’s rice fix with a paella starter), they brought out Melanie’s “roast”. Sadly, our translation wasn’t so hot. It turned out to be roasted quail or pigeon, we are not sure which.

I understand that tomorrow’s stage starts the week through the tough desert area. Keep us in you thoughts.