After a day like today, I have to start off with a prayer of thanksgiving. Today was a day we were quite worried about but everything turned out perfect. We knew we would be entering into Los Monegros, a high plateau that is considered a desert. With a long day ahead of us, we also knew that at the end of about 29km, there was no place to sleep – or do anything else except possibly eat. We knew that that in today’s walk, there would be only one place at the 11.3km mark to get food or replenish water. The last 17km through the desert would be very lonely and dry. 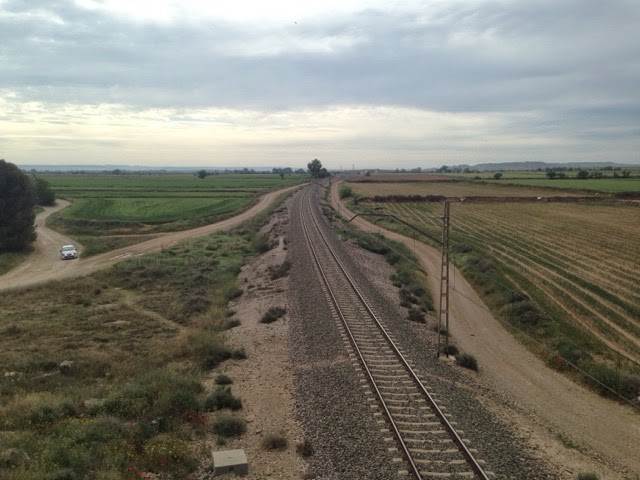 First, we needed to figure out logistics. Where were we going to sleep tonight?We decided to stop in Pina de Ebro at the 11.3km mark and check into the Pensión Los Valles. After checking in, we would drop off most of our gear, get some food, resupply our water, take a taxi to Venta de Santa Lucía, then walk backwards on the trail to Pina de Ebro again. Sounds like a plan, right?

As we set out from Fuentes de Ebro, we were happy to see a cloudy sky. If fact, except for a half hour of so in the afternoon, it was cloudy all day. And we were very grateful for that. It made walking so much more enjoyable without the sun sapping our strength. Just a kilometer or so along the way, the blacktop road changed to a rocky / gravelly dirt path that varied little the rest of the day except short bits on bigger roads. 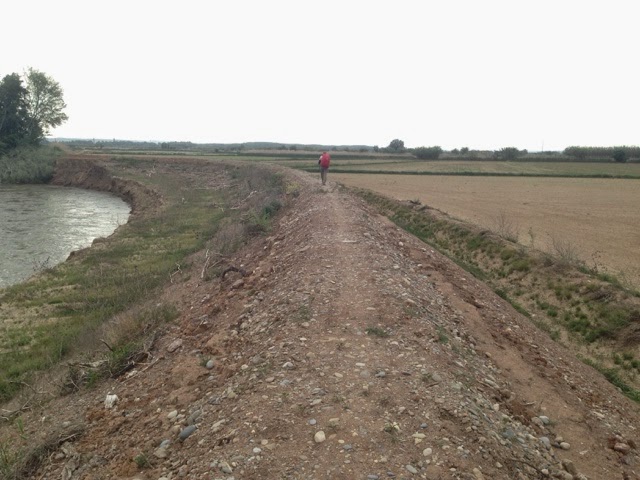 We made it into Pina de Ebro with only one minor hiccup mentioned later but we were otherwise strong and anxious. The woman who ran the pensión where we were staying was out sweeping her sidewalk at the entrance to the city. She recognized the two crazies with backpacks as pilgrims and told us that she had the keys to the pensión. That was fortunate!  She walked us over, saving us some searching, and checked us in. We quickly got rid of everything we would not need for the next 17km and headed to the busy bar below us for a quick bite.

Sadly, it was only noon when we went in and the bar only serves food from 1:00-3:00pm and 8:30-10:00pm. Ugh! Spanish time!  We had a quick soda then headed next door to the store which at least sold something edible. Lunch ended up being a bag of potato chips (crisps) and a donut. Nutritious, right? 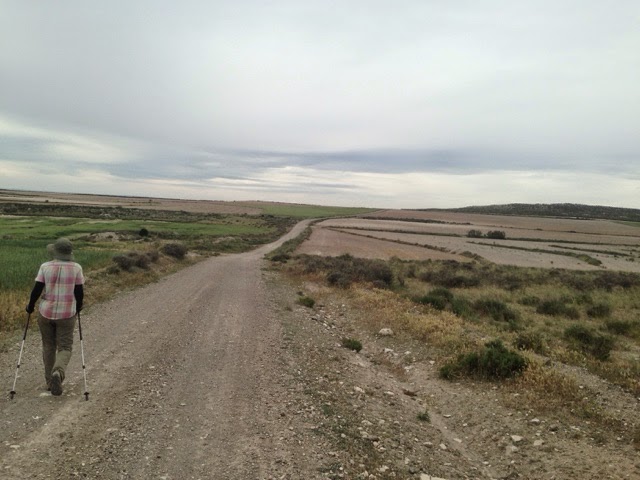 After that excellent meal, we asked the barmaid to call a taxi for us. She seemed to be talking too long but eventually got off the line, asked us to sit outside and wait because the taxi will arrive… at 1:00pm Uggh again!  We finally got to Santa Lucía at 1:15pm after a 20€ ride. 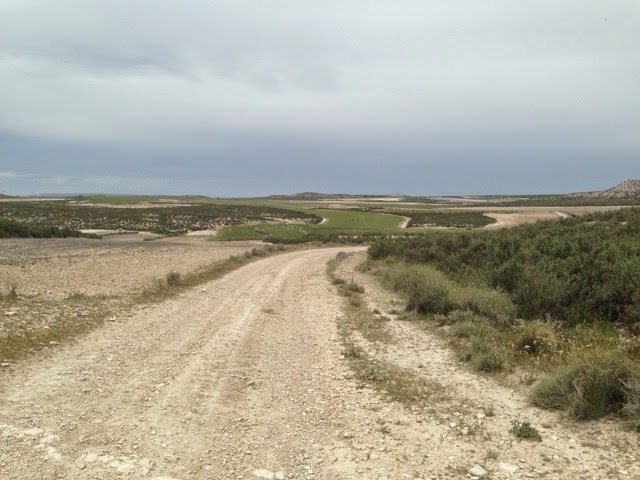 I must admit that it took willpower to get out of the comfortable, air-conditioned taxi but we had to walk. Heading straight onto a dirt path into the desert is a little spooky. Soon though, I realized that there was a fair bit of green and crops around. It was not nearly as devoid of life that we expected. There weren’t any trees for shade but we saw mostly green covered land despite the arid air. That greenery and the clouds got us back to civilization at 5:00pm. We also went through almost every drop of the three liters of water we had. Again I was thankful for the fortunate day. 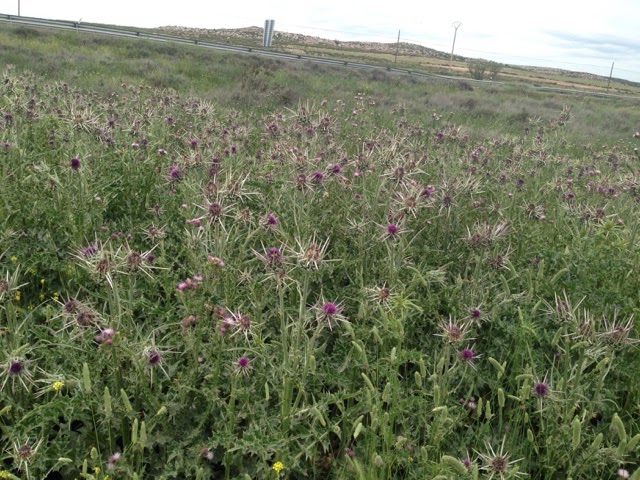 By the way, about 5km into the desert, we ran into Andreas, the Swede from lunchtime yesterday. He had said yesterday that, due to the lack of rooms in Santa Lucía, he just might combine the two stages and walk 50km to Bujaraloz!!!  When we met him today, he had much more humble ambitions such as finishing the last 5km to Santa Lucía and considering walking a bit further, after food & drink and several hours rest. 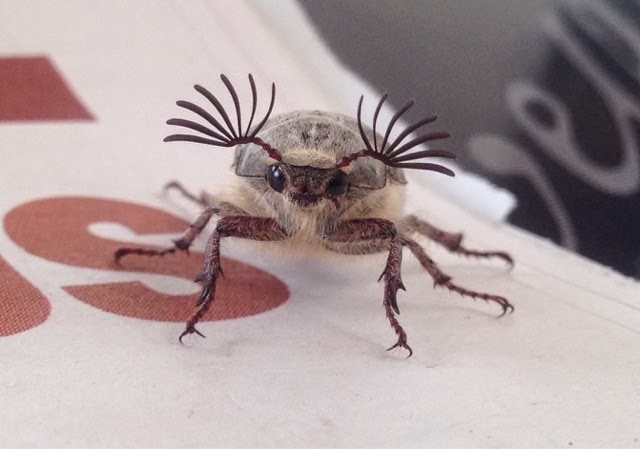 Edited to add: I don’t know what this guy is. When we got back to Pina, we sat down in the bar for a quick drink before going upstairs to clean up. I saw him on Melanie’s shirt but Lord knows how long he had been hanging on there. We carefully moved him into a newspaper but the 3cm beetle looked so cute with his fancy “eyelashes”, I had to get a picture.

For those following us, after a delightful walk along the Ebro, you reach a road for a short walk across a bridge into Pina de Ebro. At the entrance to the bridge where the guard rails start, you will notice a sign on your right which suggests you should take the dirt path next to the road, rather than stay on the road itself. Let me warn you that the dirt path does indeed go all the way to the river bank. Unless you can swim very well and your pack and clothes are completely waterproof, this walk not only gets you only muddy but also on the wrong side of the river. Take the bridge!