The highway through hell

Today’s walk was a short and simple, almost arrow-straight, trudge through Los Monegros always within earshot and eyesight of the N-II two-lane highway. It was comforting in one way, knowing it was impossible to get lost but irritating too to have nature interrupted.

For the second day in a row, we were blessed with cloudy weather which kept the temperature survivable. I was told that 40C is common in the summer and it feels much worse with the sun beating down. Yesterday, we had a slight breeze at our backs some of the time which was helpful. Today, we had a strong wind in our face a lot of the time. Again, that helps keep us cool but it slows us down a bit too. 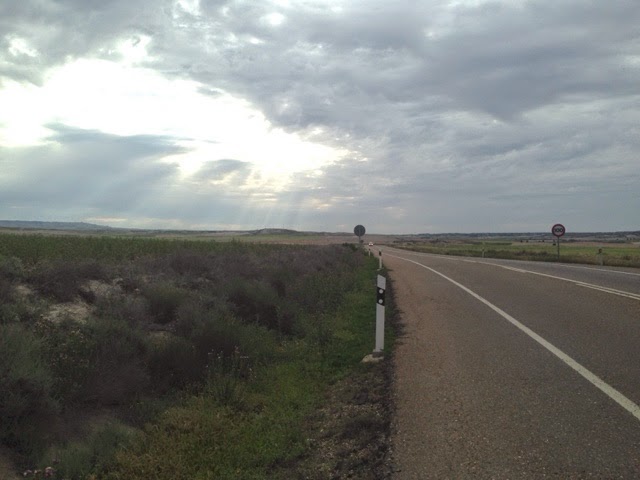 After the first kilometer along the edge of the highway, the trail varied from rocky to gravelly to pebbly to packed dirt tracks. Much of it was rutted from tractors passing over it the last time it rained here (February?). That helped throw off my balance but I’m told the constant unevenness is good for building all your leg muscles, as long as you don’t sprain an ankle. 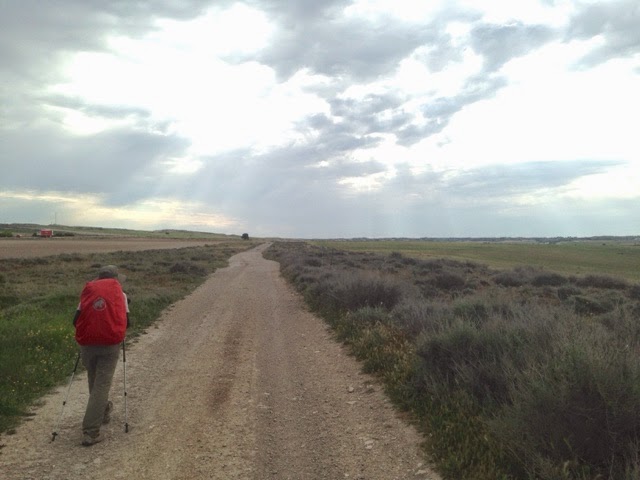 The only place to rest today was a petrol station at the halfway point where the path came right up to the highway. For those following us, note that the restaurant that is next to the station is closed for renovations. It appears that it has been that way for quite a while. The petrol station has some food but avoid the pre-made, packaged sandwiches. The “use by” date on mine said 5/5/15 but I am pretty sure it meant 1915.

We are staying in the El Espanol Hostal that has a 24 hour bar and restaurant downstairs. Melanie is in seventh heaven. It’s just at the entrance to this small village so we’ll have to take a walk into town after siesta time. 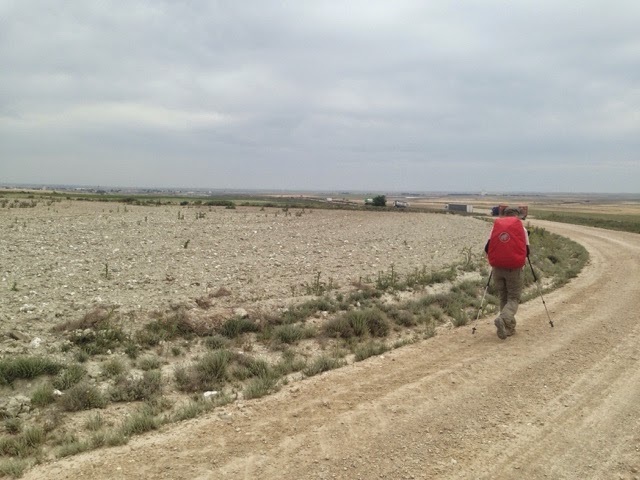 That reminds me, the short day meant that we finished in time to have a real lunch and a siesta. That’s been a rarity on this Camino with its Spanish time meals and walks ending at 5:00pm.

One thing that I think I have neglected to explain. The timing of our walks in the title of each post is usually from the moment we start walking in the morning until we reach our final destination. The clock continues for meals, snacks, toilet breaks, pharmacy stops, etc. The only exception of time I don’t count is something like yesterday when we stopped at Pina de Ebro to check into the hotel and then get a taxi to Venta de Santa Lucía. I only restarted the counting when we got out of the taxi to walk back to Pina.

Pace, on the other hand, is calculated by a basic Garmin watch. I stop that for meals, snacks or anything else indoors. I include, however, the time we stop to chat with people, take photos, water stops or nature calls (the outdoor variety).

A couple of milestones I’ve noticed –  Today is 2/3’s of the 27 days we expect to walk. Also, I look at a map and it looks like we are closer to Barcelona (and, hence, Manresa) than we are to Logroño. Weren’t we just there a few days ago???  I guess we are getting close. Two more days in Los Monegros then it’s all down hill…. errr, except the climbs near Monserrat. I’ll deal with that later though.