The sunny highway to the edge of the world.

The first 18km today was similar to much of the past few days except for two big differences. It was still a track paralleling a highway, usually 100 – 500m away. We still saw lots of rabbits running across the trail and in the nearby scrubland. We still had a petrol station near the halfway point for some food and a toilet break. The trail was still fairly flat and straight. 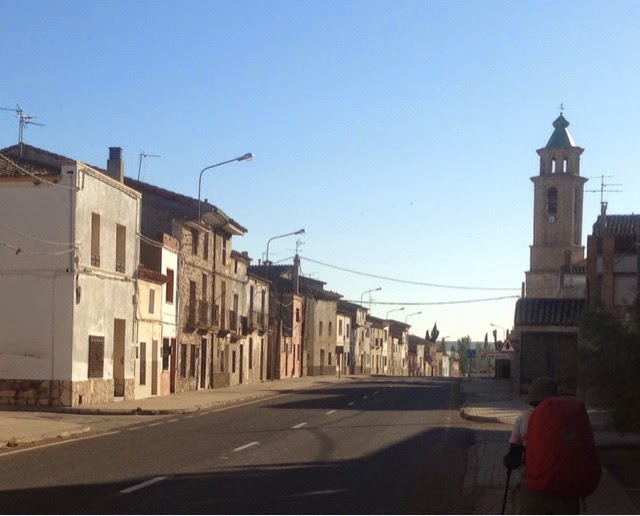 So, what were the differences?  First, the sun was finally out and I spent most of the walk thanking St. Ignatius for keeping the clouds over us for the past few days. It wasn’t just hot out there. It was damn hot. It was the kind of hot that causes Lucufer himself to reach for a cold beer. We covered up what we could and used liberal amounts of sun cream on the rest but just put our heads down and kept going. At one point I looked up and saw a single cloud in the sky, so tiny and so far off in the distance that I thought it was a mirage. Today would have been a good day for a 5:30am start. 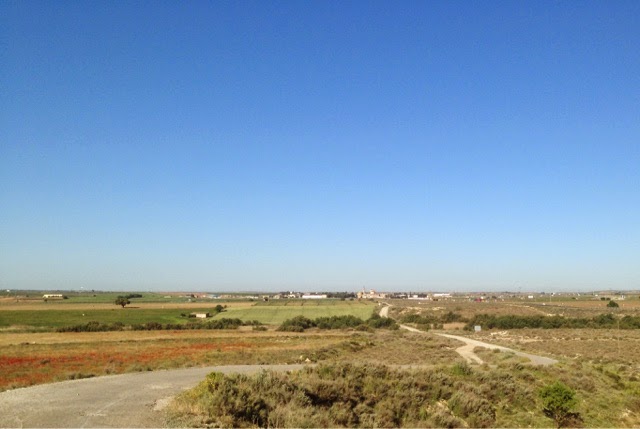 A look back at Candasnos

The second difference was that as we got closer to Fraga, we got closer to the horizon. Really. After a quick limónada at a small truck-stop restaurant and bar, complete with what appeared to be a “working woman” sitting on a up-turned bucket in the shade of an olive tree in the parking lot, advertising her wares to passing truckers, we walked another few hundred meters to the end of Los Monegros plateau. It seemed like we were looking down from the edge of a very large and curvy tabletop onto the Rio Cinca valley and the town of Fraga below. The views were awesome but an iPhone camera just could not do them justice. 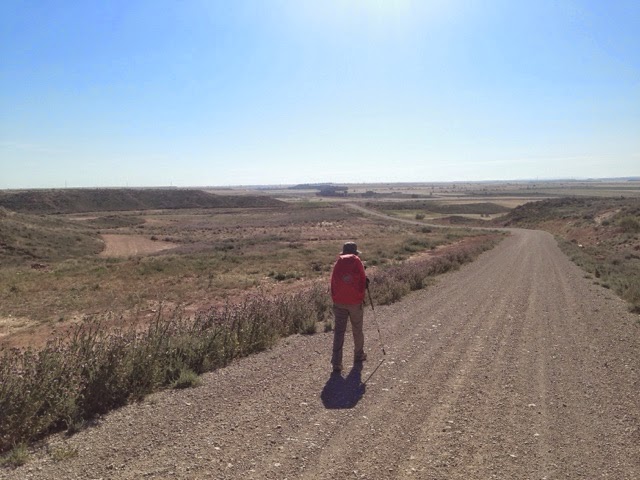 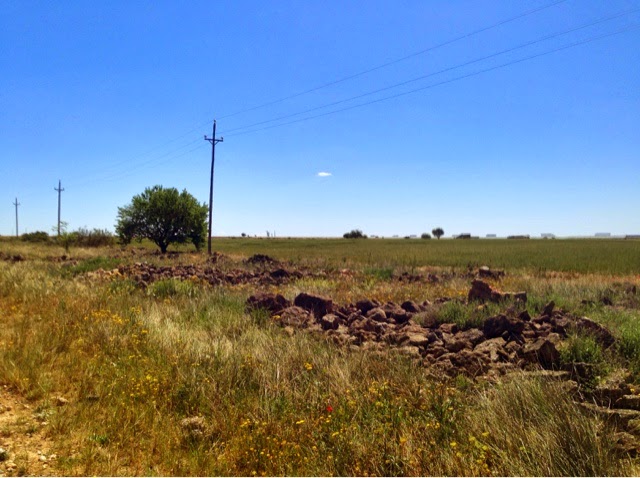 Do you see the cloud in the center of the photo?

Before leaving Los Monegros, I turned with outstretched arms to thank the desert for being so kind to us. Nonetheless, I was very happy to leave it. The sun baking us today hinted at what we could have had all week. I pity the pilgrims crossing that area in summer. 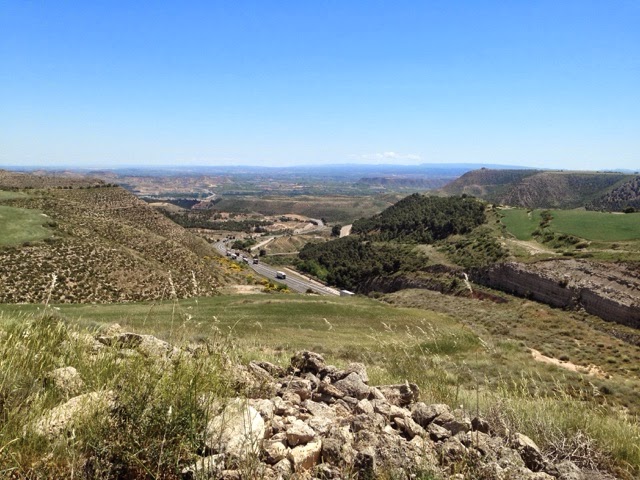 Our first peek at Fraga

The walk down the terraced levels was long, winding and fast. We had to slow ourselves to avoid getting blisters. Arriving on the edge of Fraga town was something I was looking forward to for a good month before we even started walking. Tomorrow we enter Catalonia and the final chapter in the walk, one that is not flat and treeless. 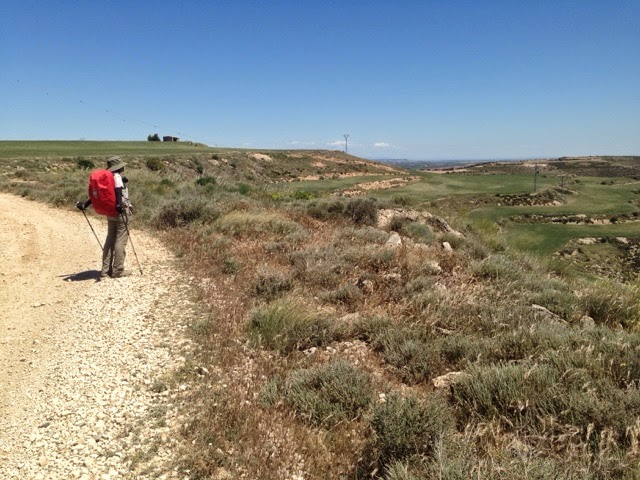 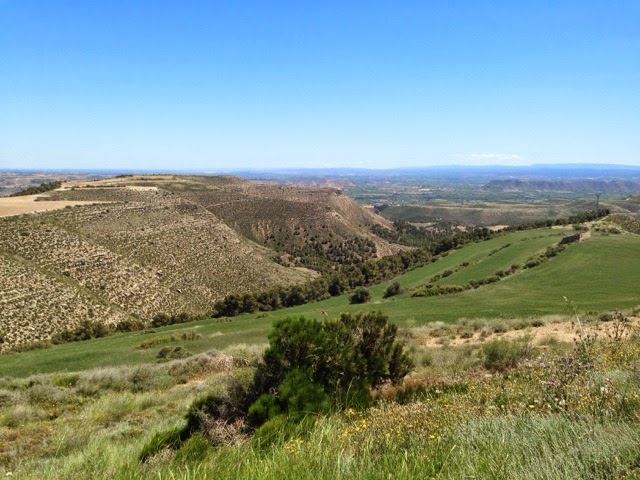 Today we are staying in the Hotel Casanova. I didn’t make that up. It is a very nice three star hotel with a special deal for pilgrims – a great double room, a full menu dinner and breakfast for both of us at 70€. We paid 60€ for the same things yesterday, except the “great” in “a great double room” part. It seems the Casanova is the only accommodations in town with en-suite doubles, according to the first pensión we checked. It’s worth the money. 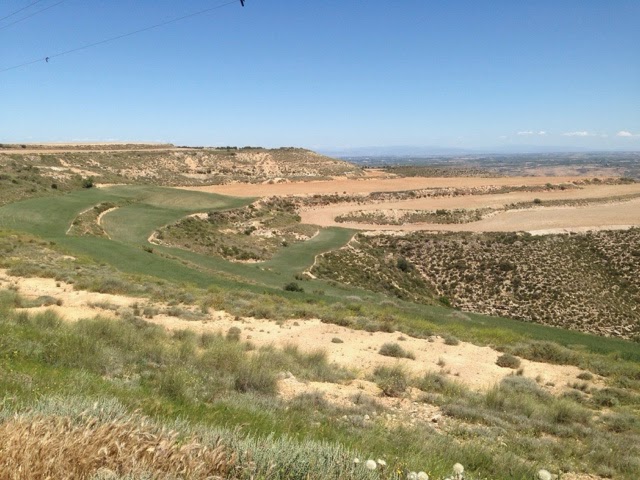 Well, Barcelona just scored a third goal against Bayern. This bar is rocking and I have an early start tomorrow. I’m heading back to the hotel to post this and sleep. 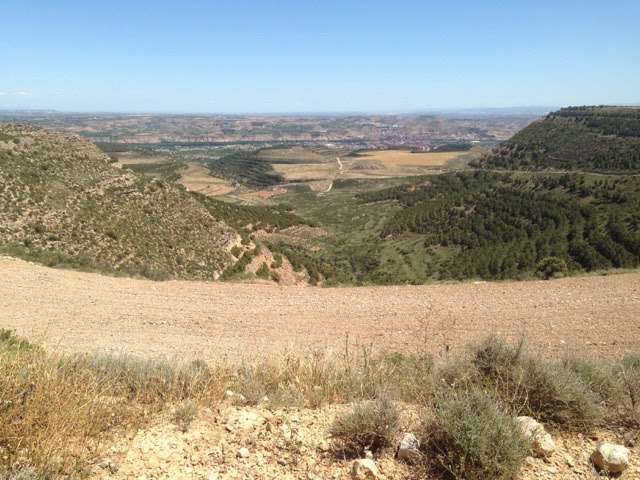 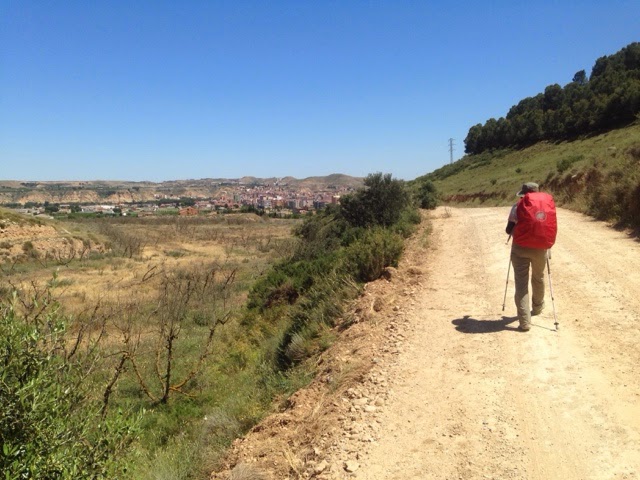