First, we ended up walking 1.5km through half of Fraga just to get to the start point today. Uh oh, that already puts the total distance up to 34.5km. That portion of that walk was nice though, over to the river then through the old town on the other side. The San Francisco-like climb through the people-filled streets was enjoyable after so many flat stages and the views back to the edge of Los Monegros were memorable. 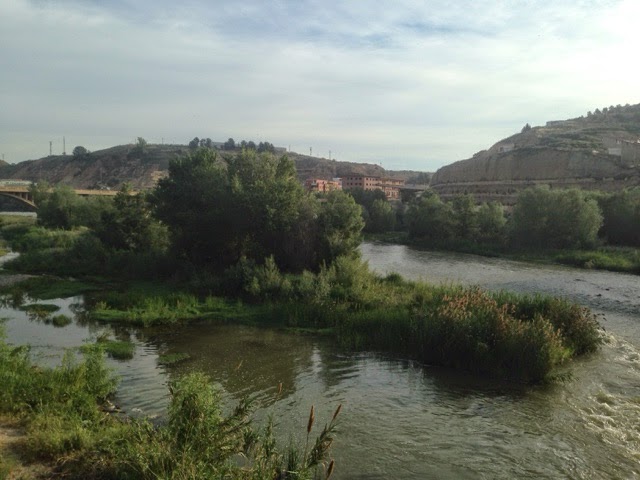 Fraga’s River the separates the old town from the new 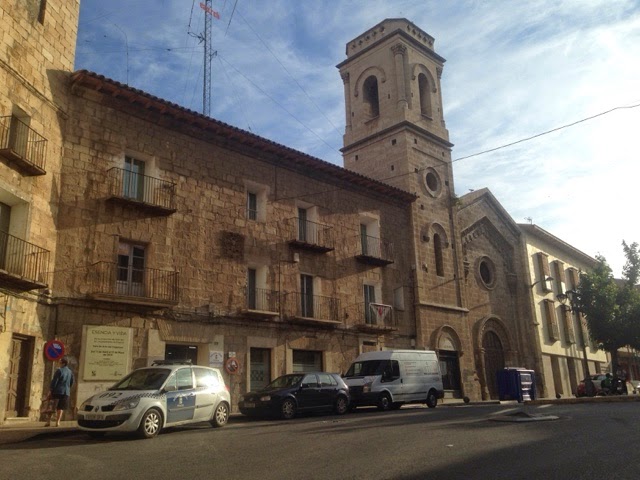 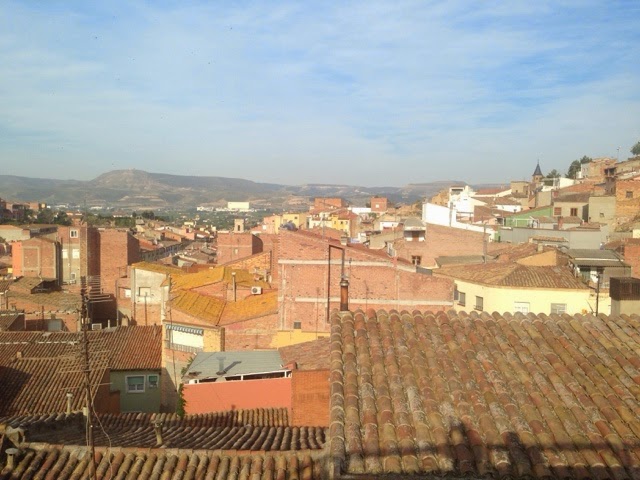 Looking over Fraga to Los Monegros

Once out of Fraga though, it was along that durn highway again for the next 15km. There was an option early on to get away from the highway but it meant an extra 0.5km and a steep climb and descent. With today’s long stage, we actually chose to stay near the highway through a tunnel. That turned out to be a troubling decision. The GPS showed the other route so we only had the written directions to guide us. 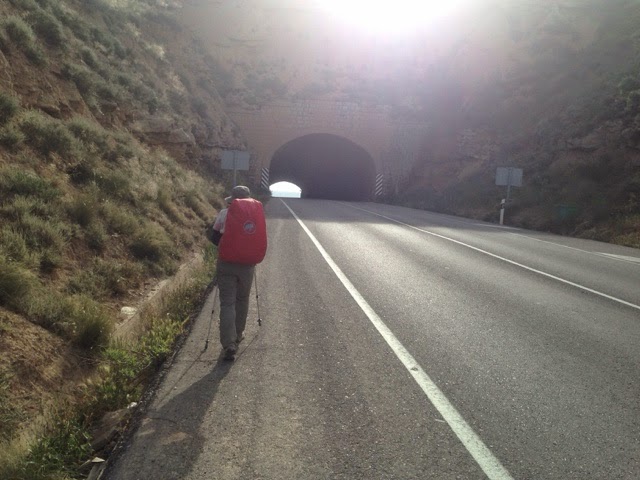 Just past the tunnel, we needed to choose one of three alternative roads. Without too much description, beyond one option noted as “make sure you don’t end up on the A2 highway” – without telling us which option would do that. Guess what we did? And the cool thing is that you go about 500m along the ramp before you realize you are just entering the country’s busiest highway. I hate backtracking so it was full steam ahead despite the blaring horns. In Spain, they don’t want people or animals accidentally wandering onto the highways so fences guard against that. You might be surprised to learn that fences keeping people off a highway can just as easily keeps fools like me ON the highway!  It took us about 2km further to find a place to climb the fence to get to the correct path. 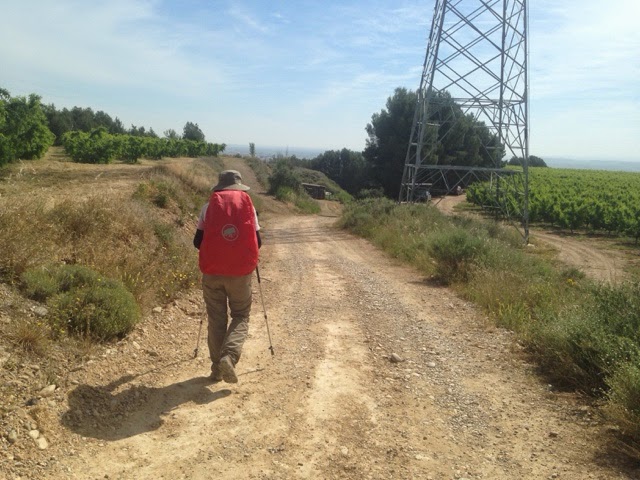 It was only after about 18km that we finally said goodbye – at least temporarily – to the highways.   After that, the walk was mostly on quiet back country roads except through the small town of Alcarrás. After we passed through tiny Butsènit, we headed down to the Riu Segre for what you would mistakenly think is a stroll on shaded trails next to the river. You are next to the river but the shady parts are too few and far between. In fact, today, I’d say that we spent 99% of the walking time in the blazing sun. There were beautiful clouds in the sky but never directly overhead. 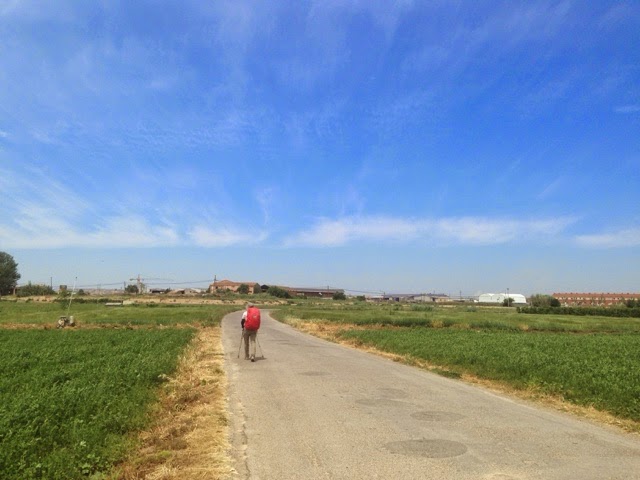 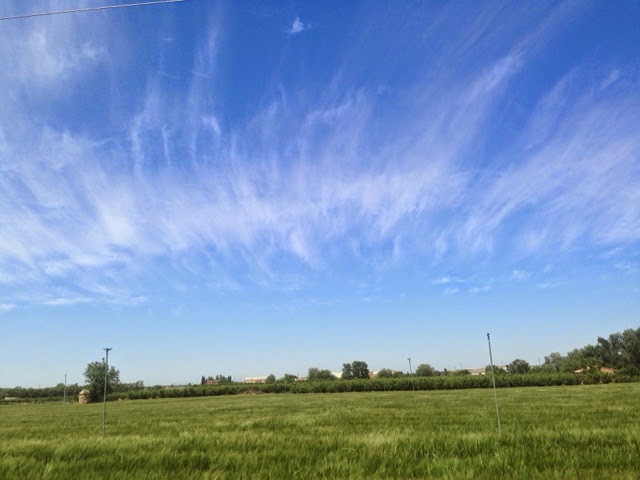 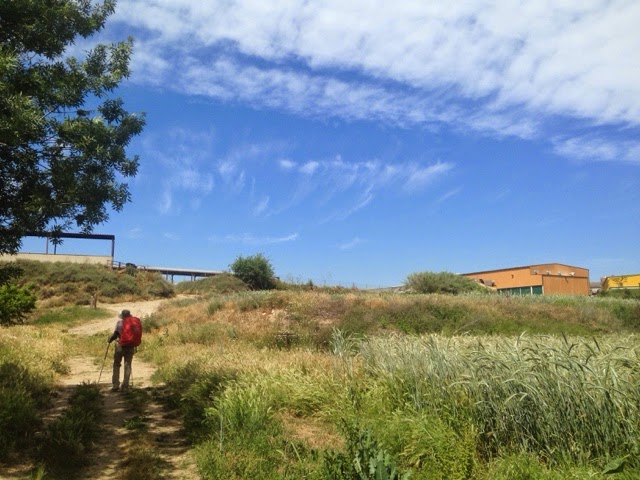 Enjoying the little bit of shade

In Butsènit, we decided we were strong enough to finish the day but with every step, we grew visibly more exhausted. Our pace was slowing down to 13, then 14, then 15 then more that 17 minutes per kilometer. By the time we reached the outer streets of Lleida, we still had about 2km to get to our hotel (the nice Hotel Real Llieda, 65€ for a great double and breakfast). We dragged our sorry looking butts into the hotel at 5:30pm so that the receptionist could pity our plight. She even remarked how hot my passport was, despite it being buried in my backpack. 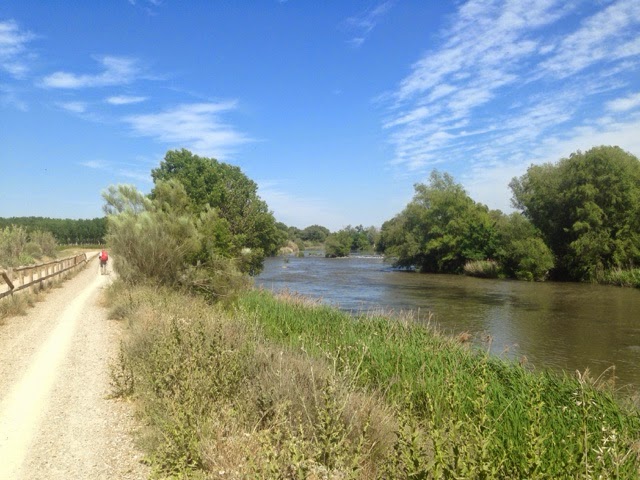 After a quick required rest, showering, clothes washing, etc, we rushed out to the pharmacy to get some miracle cure for blisters. Most pilgrims know Compeed but this stuff that Melanie stumbled onto is magic – her words. It’s called DermaActive by Tiritas (Apositos para ampollas) and it comes in sheets that you cut to size. We’ve looked in every town since Logroño and we finally found it here. Yeah!

Before I forget, we didn’t walk too far around the old city of Lleida but many of the buildings are magnificent. Even houses from the early 20th century are so ornate and gorgeous. The 15th century hospital and the 18th century “new” cathedral are awesome.

For those following us, from the Hotel Casanova, we found good places to stop to get a drink or food at the 8km mark (Hostal Oasis), 16km mark (at a bar just after crossing the “Cami Real” bridge over the highway at the 20km mark in Alcarrás. After that, you are on your own.