Back on the trail again!  The first two kilometres were necessary just to get us to our starting point in the center of Vercelli. There, we managed to find the small church of Santo Spirito and the sacristan was kind enough to give us our first stamp… and hopefully the last stamp that is so smudged that it can’t be read and it bled through to other pages. We had a good conversation, completely in Italian and I even managed to understand a fraction of it. As best I could tell, she thought we were crazy.  She may be right. 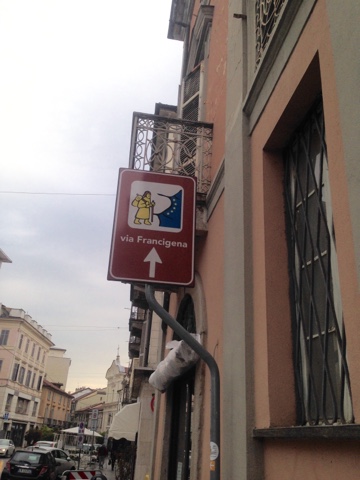 The walk through town was lovely but it did seem to avoid some other cool looking churches. Over the bridge crossing the river east of town saw us start some shoulder-of-the-highway walking. That was not nice but it only lasted a kilometre or so before we followed a gravel path on our right, into farmlands.

There was one farmhouse early on that we needed to circumnavigate.  It was there that we met the lovely Carla. She had just opened the gates to the farm for her parents to leave when several dogs also rushed out towards us.  Clara managed to recover them as well as her bravery and she came over to chat with us.  We had a had a wonderful conversation in broken English and broken Italian about living in Singapore, who else she has met outside her gate, her impressions of Germans, etc.  She has never been to Rome, Naples, Venice, Pisa or even Milan but she has travelled the world through the eyes and stories of passing pilgrims. Meeting Carla was today’s highlight by a long shot. 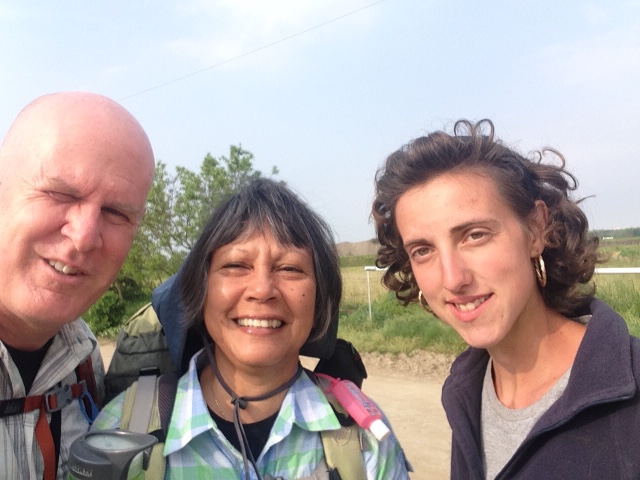 We have already figured out that the route is very well signposted but having the GPS tracks in Maps.me is also very useful. When the trail sends you down a dirt track between rice fields, there may not be another sign for 3km. If you miss that one, you might just keep walking for miles because this isn’t the Camino Frances. There are no painted arrows every 100m.

One drawback for today was that there was no place to stop for a bite and rest in between the beginning and end. Again though, this isn’t the Camino Frances. We managed with some nuts and apples which we bought in Vercelli before our departure and this might be a good idea for every stage.  We’ll see. 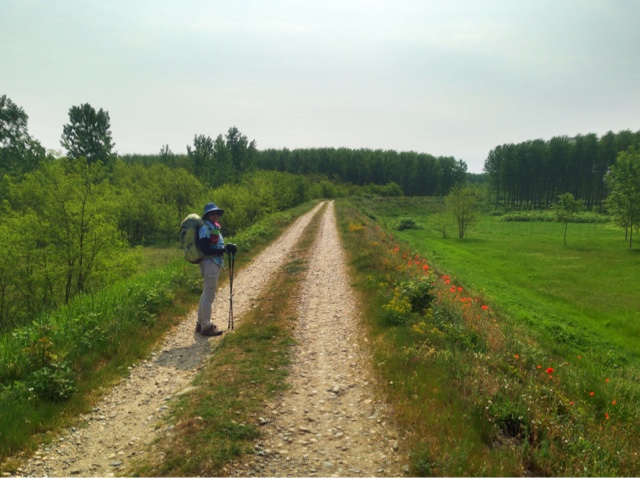 Arriving in Robbio, we headed for the Parish Hostel but no one answered the door.  We backtracked half a kilometre towards the only hotel we knew of in town but that seemed to be closed down some time ago.  We figured we were in big trouble but settled in to a sandwich at the local cafe which was run by a nice Chinese woman.  I was happy that Melanie could take over translation duties and she ordered in Mandarin! 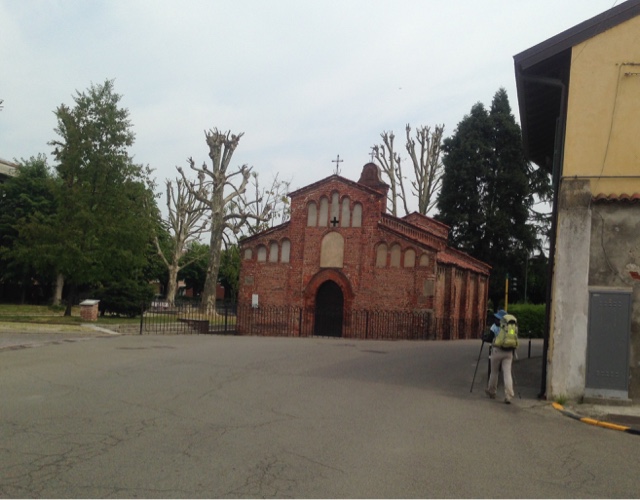 The Camino provides as always… after lunch, we asked two women who were walking by if they knew of a nearby hotel.  One of them gladly said “Follow me!” and like James and John, we knew a good thing when we saw it.  They walked us to the Municipal Building where we had tried earlier.  It still appeared closed but they took us inside through the back door and found us a woman who ran the donativo municipal hostel on the second floor in the back building.  How is the for serendipity?

The hostel had two rooms with two beds each, paper sheets, a bathroom with hot water and a kitchen too.  The only drawback here was that it also was about 20m from the town bell tower!  Earplugs helped a lot and they also softened the tolling from 10pm to 6am. We were grateful that we didn’t have to take a taxi to another town or sleep outside in the chilly night so our donation was 20€ which, sadly, was obviously a lot more than was expected.

One last note on Robbio, there are several cafes in town but if your idea of a meal is more than a sandwich, you’ll need to head to the train station, where there is a nice restaurant across the street.  It’s the only one in town.  For the second day in a row, we ordered a single salad, one pasta dish and one main course which was all enough for a decent sized meal that we shared.  There was a tourist menu, rather than a pilgrim menu, with a soup, pasta, main course, dessert and wine for the bargain price of 20€ each but we opted for less food and money and we’re happy with the choice.