Let me start off with the good news.  We were initially a little miffed at the announced “breakfast is included in the room price but we only start serving at 8:00am” but after yesterday’s wet and cold hike up the road, we decided that it was not a bad thing to sleep in a little for once.  We normally wake at 6:00am and like to be walking by 7:00am after some food but it doesn’t always go to plan.  Today we slept in until 7:00am and, after getter everything ready, we headed downstairs to use the wi-fi before breakfast.  Sure enough, the owner crawled out of bed at exactly 8:00am, asked if we wanted coffee then pointed to some mass-market, pre-packaged jelly filled croissants and told to help ourselves to one each.  Oh boy! Was this worth waiting for?  Not in the least.  If you are following us, ask for the croissant the night before and eat it as you walk out the door at 7:00am.

The weather did not cooperate again today.  In fact, it was raining harder, the wind blowing stronger and the temperature colder than yesterday throughout the day.  We had about three minutes when the clouds we were walking through cleared and we had beautiful views of the Tuscan side of the mountains but I didn’t take a photo.  We just enjoyed the view before the cloud enveloped us again.  Visibility was back to about 50-100m most of the rest of the day.

Again, due to the weather and muddy paths, we stuck to the road the whole way, knowing that it meant an extra kilometre or two.  We walked the 11km to Berceto at a decent pace despite a modest altitude gain of 300m.  There we planned to hit the ATM to replenish cash and get some early lunch.  We walked to the first cafe we saw and there was Yvonne and Gerda getting into a car!  They had such a rough day yesterday walking through the forest that they decided to skip walking in the rain again today. I hope I’m that smart when I’m 70 years old. They had also taken a train earlier to skip the last of the flat bits.

In the crowded bar, after the barman served us a juice, latte and sandwich to share, he noticed I was shivering.  Both Melanie and I were soaked from head to toe but our shirts were actually dripping.  The barman took us to a back room and told us to take off our outer shirts and hang them over the radiator. Then he turned on the heat (a rare thing in Italy in ANY commercial establishment!) and told us to sit next to another radiator. We stayed that way for an hour until the shivering stopped. That is how to care for strangers!

Back on the road, we headed for the final 9km to Passo de Cise, the pass over the Apennines from Parma to Tuscany.  We weren’t real sure exactly were we were heading though as my guidebook (LightFoot) does not list the address or the phone number of the only ostello near the pass.  I could not find it on my GPS map either. Also, it’s dangerous not to call ahead for reservations.  The worry is more that the people who run it will not show up unless they know someone is coming but sometimes you have to worry that the smaller ostellos are full, particularly when you start late.  No worries for us though, off we went.  We knew Duncan, the Aussie we met last night, was staying there so it should be open.

We were surprised when we stumbled on the ostello about two kilometres before the pass, rather than at the pass itself.  We were happy though – at least for a few minutes.  The person who managed it explained that they were very few beds and they were all fully occupied.  He walked us into the dining room with a wood stove fired up and heating the whole room nicely.  He offered to let us sleep on the floor there or at least rest for a while and thaw out again.  This time, we declined.  He said that he thought that there were a few Affittacamera just 2km past the pass so we had 4km to go for the day.  We can do that in our sleep, right Melanie?!?  Off we went again.

At the pass, three were several buildings including a bar.  We checked there, just in case as they sometimes let out rooms.  Unfortunately, the barmaid said that not only were there no beds to be had at the pass, the next possibility was in Montelungo Terme, another 8km further down the road.  Our hearts sank.  We hoped that the man at the ostello had better information and walked the next 2km.  Sure enough, there were two bars there with signs that said they had rooms to let out.  Of course, one was closed down with “Vendisi” (for sale) signs all over and the other was closed on Mondays.  How is that for luck? Rainy days and Monday’s always get me down.

It turned out that we only had a further 3.7km to go to reach Montelungo and the first B&B (Albergo Appennino) was open. I almost kissed the little old man who owns it.  He showed us up ancient marble steps to the third floor to a matrimonial suite.  He also turned on the heat. For 75€ including breakfast, heat, a warm bed, eventually a warm shower but no wi-fi, it is expensive but we can handle it today. We’re just happy to be out of the rain.  By the way, the first sign that there was no wi-fi was on the owners desk. Sitting right on top was an A4-sized calculator with buttons the size of bottle caps.  This guy isn’t IT savvy.  He does serve a great dinner though but again, it wasn’t worth 65€. He’s trying hard to make a living, I guess. 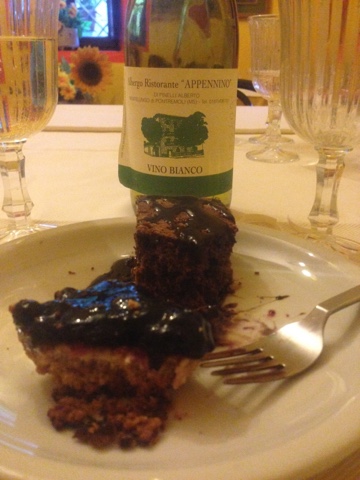 Dessert with wine.  Notice the label?

Sorry that there were not any photos today.  Most people know what the inside of a cloud looks like anyway.  The few chances for a photo were passed up because the camera phone was buried in my dry bag, not my pocket.

All is good.  We are likely only doing a simple 13km to Pontremoli tomorrow but who knows. That is such a short stage, we may just keep going. We’re getting good at that. Peace y’all.