34km and our first small hills!  Another fantastic day for a walk although it got a little too sunny and hot before it started to rain some just as we got to Fornova.

As we always do, when we are walking on the back country lanes, we wave to drivers as the pass.  We did well today with almost unanimous replies of waves back.  Even the people in cars seem to be enjoying the road conditions and weather today.

We also caught up to a nice older man who must have been in his 80’s and chatted with him as we walked a bit.  I love that most Italians are happy that we try to communicate in Italian and they are also happy to try English as well.  I am not sure where he was coming from or going to but he was obviously on an impressive walk of his own.  I have learned one phrase that always brings a smile to the older folks: “Siamo camminando a Roma.  Li, io pregheò per te.”  That means “We are walking to Rome.  There, I will pray for you”.  I have a lot of praying to do. 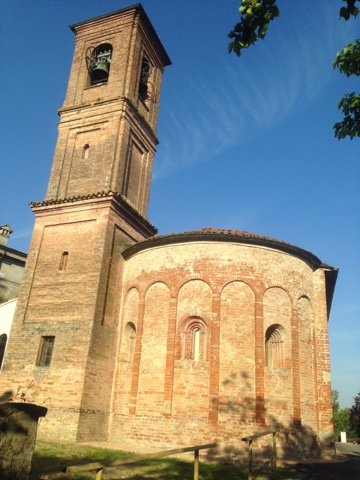 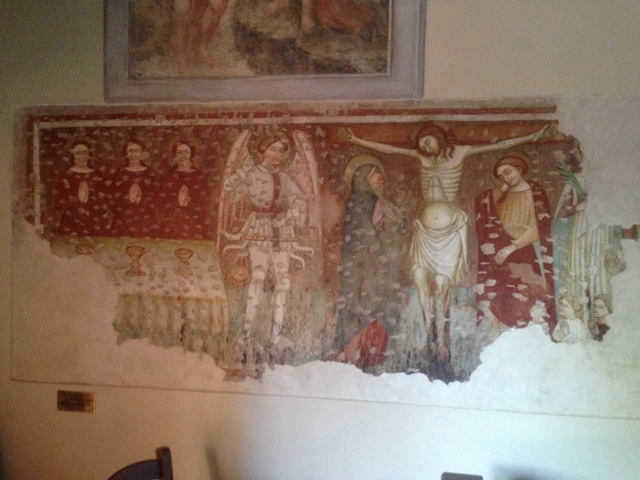 A 12th century church dedicated to Thomas Becket, a Martyr “thanks to Henry II”

One cool thing for us in today’s walk happened 90 minutes after starting.  We were in the hills already and had a great view of some city off in the distance to our left.  It seemed quite far away to us until I referred to the map on my iPhone. Embarrassingly, it was actually Fidenza, the city where we started today.  At least we had a sense of accomplishment. 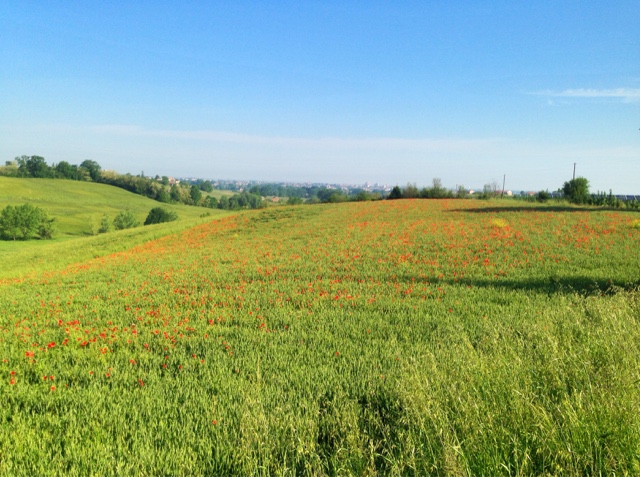 Fidenza beyond the poppy field

According to the route, we were supposed to walk just past the town of Costa Pavesi but we were ready for breakfast #2 so we walked into town to find a bar or cafe.  After a short distance, we had pretty much decided that we could not see anyplace to get a drink without climbing some unnecessary hills.  Just then, a waiter walked past us on the street carrying a tray with used plates, cups, saucers and glasses.  That’s a sign, I think – follow him!  Sure enough, he led us to a nearby cafe that was set back from the road. It turns out that the owner is a great proponent of the Via Francigena.  We signed his guest book right below Herda and Yvonne, our Dutch friends and Monique, the 80 year old French lady who somehow jumped ahead of us by a day.  They are making me feel slow! (But we think they have taken the train to skip some stages which is okay – not everyone walks every step). 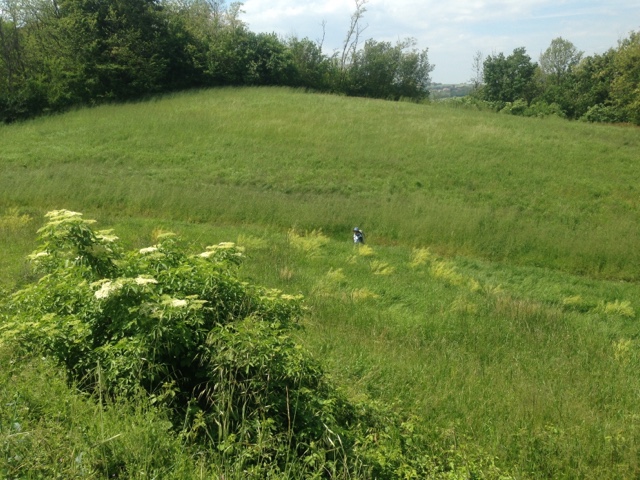 That’s Melanie in there someplace (on a switchback looking back down the hill. The grass was high!

In the town of Cella we stopped in the only cafe we could find for a quick drink and toilet break.  The cafe is lot fancier than most, particularly for two sweaty backpackers but the owner treated us like his favorite customers.  He gave us a plate with chunks of parmasian cheese.  At first I thought he was pulling my leg because of my national politics (you know: Make America Grate Again) but he said that he offers it to all pilgrims.  I’m a fan! 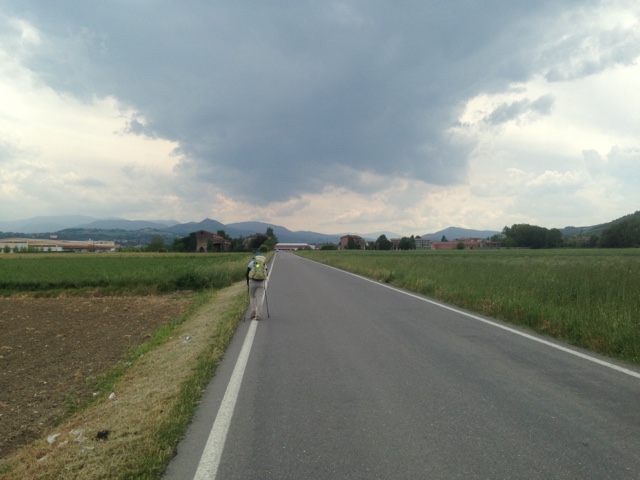 Straight towards the hills.

Outside the Verde Bar in Medesano, a very old man called to us so we stopped.  He asked if I was German or French.  No and No.  Where are you from? American, I replied.  He leaned on his walking stick, stood up straight and to his full height and said with a rising, almost an accusatory voice “I ask you b e c a u s e  I speeeeeak ENGLISH!  He then went on to tell us in pretty darn good English that he was almost 90 years old (88 to be exact), he had a brother in the US, he has worked in Iceland, Demark, Iran, India and the Suez Canal and he currently lives in his own house over there (pointing down the street).  I love these guys. 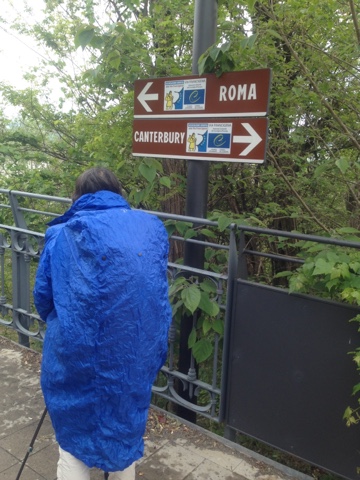 Checking directions just before crossing the bridge into Fornova

As noted, today was perfect except a few weather issues that we could deal with.  It was perfect, at least until we reached our accommodations for the night.  We stayed at the ostello at Santa Maria Assunta.  These places are run by church volunteers and they are available for any donation but, my goodness, we have only had wonderful experiences at every other ostello.  This one was different.  The woman than ran it was certainly in no hurry to let us in.  She practically forced us to sit in her cafe and buy something first despite our late arrival.  When we asked her thirty-something daughter if we could go to the room, we made the mistake of explaining our needs using some English words.  That seemed to piss her off.  She told another pilgrim to show us the room with a dismissive wave.  Wow!  It got much worse upstairs though.  I’m too tired now to give all the details but in summary, the bathroom door didn’t close all the way and all the pilgrims relied to a sign on the floor outside the door saying whether the room was in use or not; our bedroom door did not open completely or close completely – if you tried either, it fell off the hinges; there was mold on the wall right next to where my head was; there were four occupied cots in our room and not a single other piece of furniture to put anything on; five us stayed there last night and there were four blankets – we searched for more and found two quilts in a box that must have previously been used by a homeless man for a few years.  I guess that I should be grateful that I had a roof over my head but I could not help myself when I signed the guest book “Thanks much for the hot shower, warm bed and cold reception”.