I thought it was supposed to be April showers that brought May flowers. I can assure you that in this part of Italy, it still rains – all day – at least on the first day of May.

This was the other day that we were dreading but I guess in a way, we got lucky.  We have finally reached the climbs in the Apennines mountains. We only had 1224m of ascents and 575m of descents but the main climb was a pretty steep 600m.  As we have been on flat lands so far, this was going to challenge us.  I am not sure that I should say that the weather hurt us or helped us.  It was a cold, dreary, overcast morning and a steady drizzle started soon after we departed yesterday’s cosy little place.  The first 13km of the walk included some steep bits but it wasn’t bad at all. 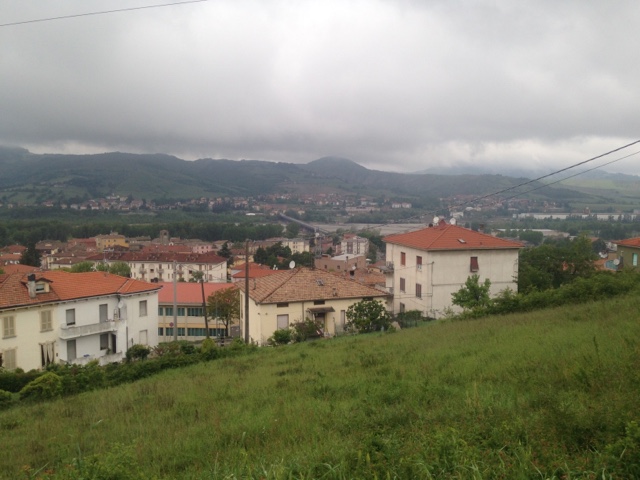 Only 20 minutes outside Fornova, we are looking down on the town and can see the bridge that we crossed yesterday (in the centre of the photo)

At this point, we reached the little town of Terenzo and we had a decision to make. The remaining 7km of the walk was described as very steep and sometimes dangerous dirt trails through the forest. That didn’t sound so good to us but we looked up the start of this section anyway.  Nope! It was a very muddy steep first 30m and that made up our minds for us.  Thank you rain.  We knew the alternative route along the road would mean more than an additional 2km but it was the wise choice for us, if not a little wimpy. Three pilgrims we later met at Cassio who started at a town after Fornova all went on the trail and they said it was awful and dangerous because of the mud.  They slipped and slid quite a bit. I’m comfortable with our long-cut even if we were in thick clouds at time. The road wasn’t busy because of the rain.  Apparently on Sundays, it is a favorite road for motorcycle clubs to race on with their 1000cc bikes.

Other than the folks we met at Cassio, we only saw one other “pilgrim” and the crowd of people avoiding Sunday mass at the bar in Sivizzano.  The “pilgrim” who we saw was a young man who looked quite strong and he was walking with gusto towards us.  As he passed, I offered the usual “boungiorno” and asked him “a Santiago?” (Are you going to Santiago de Compostella?). Without breaking stride, he smiled and replied “no, mia casa”. It was only when we reached Cassio that I heard of this man’s story from pilgrims he stayed with last night.  He was a Swiss Guard for the past three years, part of the group that protects the Pope. He had just finished his duties so he was walking home to Switzerland. What a way to switch off between jobs.

The group of people we met in the bar were quite typical. Almost exclusively older men, they all play cards or watch over the shoulders of those playing cards.  Sometimes in these bars, we see six or more tables of games going on at once. We haven’t figured out what they are playing yet but there are a lots of cards thrown down in disgust, finger pointing and laughter.  We rarely see anyone order anything from the barmaid though.  Other than them, townspeople regularly walk in, get a cup of coffee, espresso, cappuccino or something else, quickly drink it, pay and leave within a moment or two. 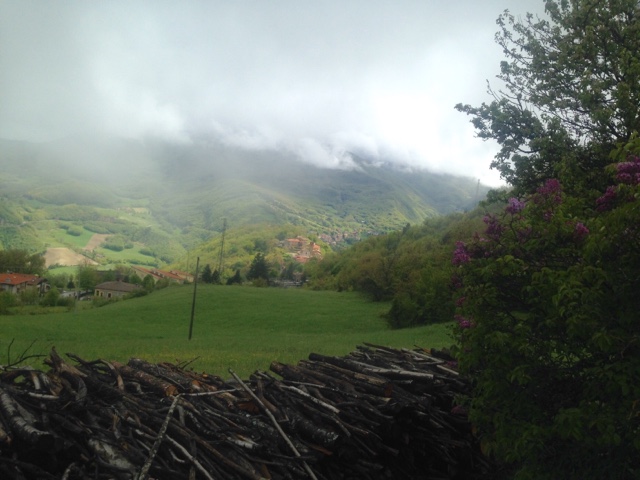 4km to Cassio.  We’re still in the clouds but the small village in the valley has found some sun.

Tonight we are staying in the wonderful (at least in comparison to last night) Affittacamera above the restaurant Veronica.  I haven’t even asked how much it cost yet but I don’t care.  We needed a clean room with a bath attached at least for tonight.  A pilgrim staying in the ostello across the street says that it actually quite nice itself.  It’s too cold and rainy for us to do any wandering this evening.  Thank God we only have to go downstairs to eat.