What a glorious day for a walk!  Stepping outside later than normal this morning, it was chilly but not nearly as cold as yesterday. While the sky was still overcast until about 10:30am, there was no cold wet wind, just a slight, usually warming breeze. You can’t beat that.

The route today was mostly back country lanes and some gravel paths. We reached the wonderful small village of Chiaravalle della Columba in less than an hour and that signaled time for the first pit stop and breakfast #2 in a cafe with the most pleasant hostess. She was happy to speak in Italian with us and was very patient with us.  Before long, a few other customers came in and took great interest in this Singaporean woman walking to Rome.  One man tried his best to explain a shortcut we should take but after yesterday, we were not interested.

For those following us, Chiarevalle is definitely a neat tiny village and proudly boasts its own hotel next to the lovely church.  We can’t quite put our finger on why but as we walked out of town, both Melanie and I said at the same time that we really liked the place. 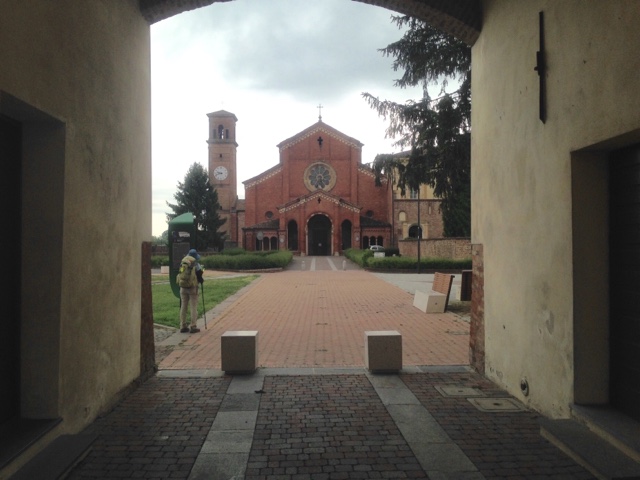 We continued on into the tiny hamlet of San Rocco, the first place we reached inside the Provence of Parma.  Continuing on, we also went past Stramaglia and then came to a small dilemma. Our map was telling us to turn right, walk 1.3km, then turn left and walk 1.4km to the village of Castione Marchesi. It looked, however that if we just went straight 500m, then turned right and walked about 1.6km on a larger road, we could reach the same place and save ourselves 600m. Let me tell you, I’m glad that we did didn’t shortcut this section.

While walking the signposted but longer route, we came upon a old farmhouse with signs outside of the front gate giving directions and distances to Rome, Canterbury, Santiago, Ayers Rock and a dozen other places. We had to stop for a photo but as we did, the owner walked from behind the house and waved hello.  He asked if he could do anything for us which was a first for us.  He then invited us in for coffee… this is getting unusual.  Before you get any thoughts like “was he an axe murderer, just looking for his next victim?”‘ I will tell you, it turns out that just like the old man in Tremello and Danilo, the ferry boatman, our new friends, Massimo and Claudia Mainardi, are true characters of the Via Francigena. 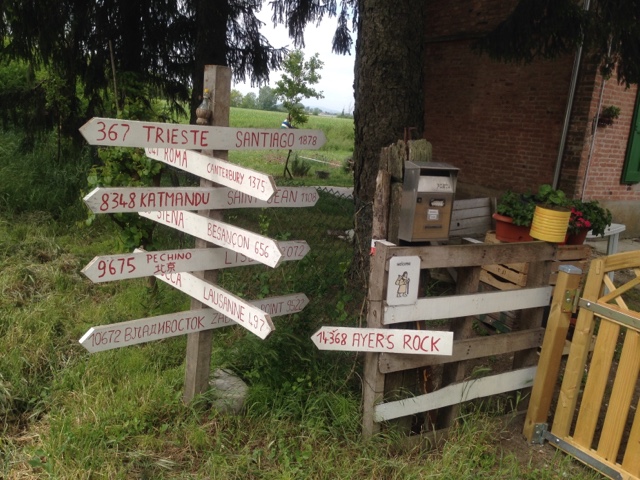 Massimo and Claudia both teach at a local school but when they are home, they always keep an eye out the window for passing pilgrims.  They regularly invite them in for coffee and a chat, assist with translations and making reservations for a bed, giving advice on Fidenza, even allowing pilgrims to spend the night.  They are absolutely a delightful couple, fluent in French and 99.8% of the way in English and they are great fun to chat with. We spent more than an hour enjoying their hospitality. Even after we left, Massimo was heading into Castione for an errand but ten minutes later, a car driving towards us stopped, out jumped Massimo and he handed us a loaf of olive foccocia bread that he just bought. How cool is that?

For those following us, if you get a chance to meet Massimo and Claudia, please do.  Even if they don’t see you, stop and call over the fence to them.  If they are not at home, you will miss a great experience but it would still be a good idea to leave a note, or better yet, a postcard from your home with a note written on it.  It is not often that people give so much of themselves and expect nothing in return. Not only the Via Francigena, but the world needs more people like them.

The rest of the way into Fidenza was fairly straightforward. For those following though, there are a few ways to get into town and they each may show up in the map, guidebook or GPS set that you have.  After Bastelli when you finally turn south directly towards Fidenza, either keep straight into town on that same street, at one point crossing the railroad tracks like all the locals do, or alternatively, follow the longer path that is currently signposted. I had the old (?) GPS tracks for a route between the two but there now is a river to ford just before passing under the Tangentzialle via Emillia. 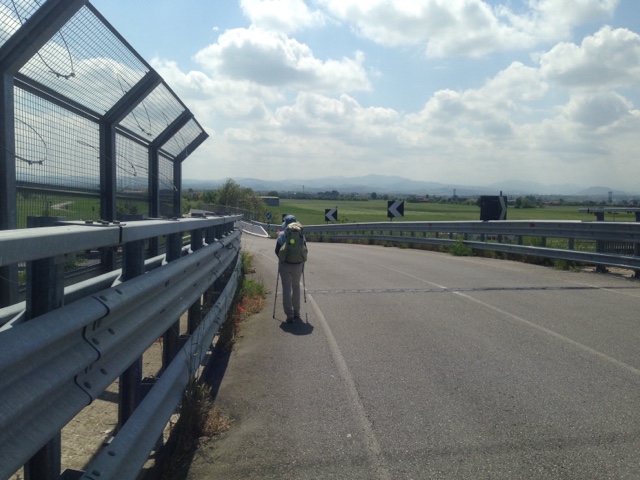 Tomorrow we reach the base of those hills in the distance

I should also mention the outstanding dinner we had at the wonderful little Cafe della Piazza next to the municipal building. The owners were just closing up as we approached but they stayed open and prepared special off-the-menu pasta and meat dishes for Melanie.  They took a instant liking to her (how can you not?)

We are spending the night in an upscale ostello named Affittacamera al Duomo, just next to the Duomo.  For 40€, you get a double room with wash basin, a very warm bed, washing machine, fridge and 16/7 wi-fi. It is supposed to be 24/7 but it stopped working last night before I could post this message. 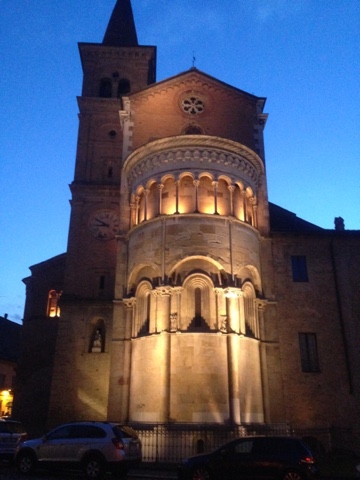 The Duomo at sunset 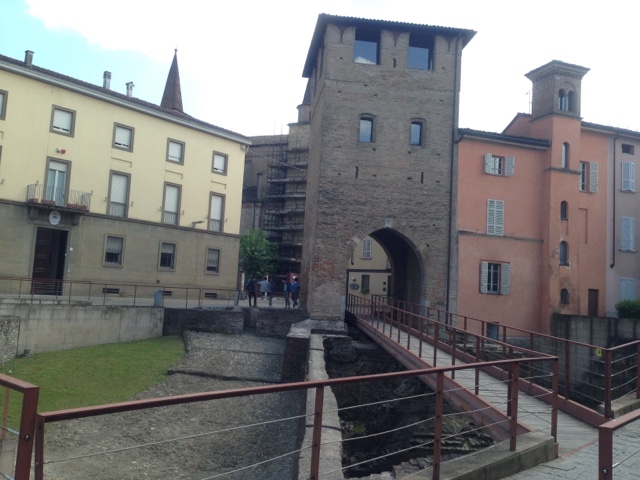 Entering Fidenza’s old district through a gate with an archeological dig going on underneath.