This is the day that we have been dreading abut also the one that we thought we were prepared for anyway. Unfortunately, Italy threw us a curveball. We really didn’t have much time to train for this walk – I did a single 10km walk without a backpack one week before departure!  We knew this would be the case which is a major reason why we chose to start from Vercelli.  We would have seven days of relatively short stages and about ten days of walking on flat land before we got to the hills of Tuscany. This was supposed to be the first big challenge for us of a 34km day but we thought we were prepared.

First, we chose last night’s ostello because it was 5km along the Via Francigena past Piacenza – the normal stopping point for yesterday’s stage. We just moved 5km from today’s walk to yesterday so that today’s was now reduced to 29km. Also, while doing some research last night, I realised that the current normal 34km stage to Fiorenzuolo d’Arda is partially a brand new route.  The older route used until last year was only 32km and it is still signposted.  If we took that route, with yesterday’s 5km head start, we would only have to do 27km today and we have already walked that far a couple of times this week.  Well, that was the plan anyway.

This older route followed the main two lane trunk road a little longer before going much further south through country lanes, meeting the new Francigena route and coming back up to Fiorenzuola.  This main road was likely the original road to Rome that Sigeric used in 990.  Now though, it is a way for commuters to race each other to work during rush hour either towards Piacenza or Fiorenzuola.  The road does have a decent shoulder to it but it isn’t so much fun for walking. We were supposed to be on it only 5km using the former official route. More about that later.

The curveball that Italy threw us was the weather. We have had some chilly mornings but nothing like this.  The minute we stepped out of the ostello to cross the street for some breakfast, the cold took our breath away. There was also a stiff steady cold wet wind that was going to be in our faces the whole way to Fiorenzuolo.  By the time we walked the 50m to the cafe, I was already putting on my thermal skullcap and arm warmers. Not long after heading out after breakfast, I also had to add a neck buff. Remember, I’m the one in in this walking party who never gets cold!  Melanie was frozen to her bones. A sign at a pharmacy said that it was 8 degrees Celcius (47F) but it felt much colder than that.

With shivering teeth, we set off for the old route.  It is a heavily used road and you do need to be careful, staying on the very edge of the shoulder, furthest from traffic.  We managed the 5km then headed south on the old route just before the village of Pontenure.  While passing the southern edge of the village, Melanie needed a warmth break already so we headed back into the village to find a cafe.  After waking up with coffee, we decided that we would never make another 24km in that cold. We calculated that it was by now another 12km to Fiorenzuola, if we just shortcut, walking all the way down the main road – so that’s just what we did.  It’s not our usual way but we were frozen solid.

For those following us, I’d recommend this route only if you really can not make the 34, 32, 29 or 27km alternatives. About 40% of the way could be done on sidewalks, edges of farm fields, parking lots, etc.  The balance is on the road shoulder and the traffic barely eased off from rush hour to 12:30pm.  It passed through some nice small villages but if it was warmer, I would have preferred the official route. The only benefits of this direct route, other than getting us inside quicker, was that we got to see a real artisan recreating an elaborate wooden doorframe at gorgeous church in Cadeo and we also enjoyed the fantastic smells coming from a biscotti factory just on the edge of Fiorenzuola. 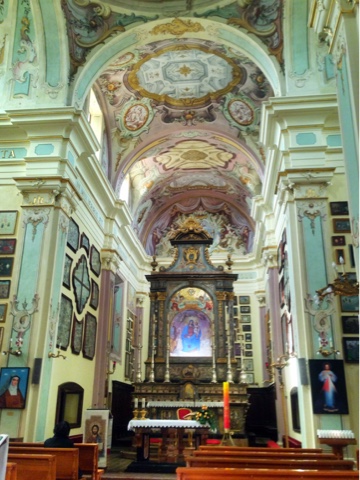 We also ended up deciding to stay in a proper hotel to get warm and have a better night’s sleep.  Although it took us several hours, we did eventually thaw out and we had the best sleep so far under the goose down duvet of the Hotel Concordia. It was 75€ well spent. 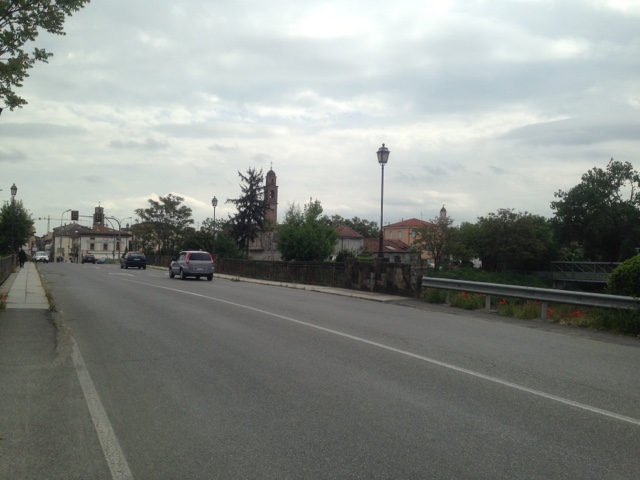 Today’s view most of the time.

One last comment on the day related to dinner.  We were in a small restaurant near the duomo, enjoying our food when another couple were trying to explain to the waitress a problem they had with their food.  The couple were speaking English with an accent to the waitress but obviously from Eastern Europe or Portugal, based on what they were saying to each other (if you know Portuguese, that should be funny).  Anyway, the waitress was getting very frustrated that she could not understand the problem…. that is, until I stepped in and translated issue from accented English to Italian.  It was a simple problem but I still almost hurt my arm while patting myself on the back.  My Italian is getting better! 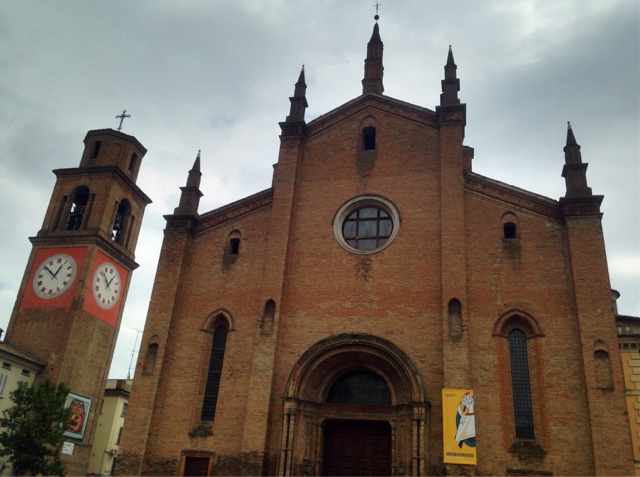