This is our fourth long walk in as many years and until today, we walked every single step of every single kilometre. For the first time ever, we cheated.  Sort of. Apparently when Sigeric, that Archbishop of Canterbury who started this thing by doing his walk to Rome to receive his orders from the Pope 1,000 years ago, he took a ferry across the Po River just after Orio-Litta. Modern day pilgrims doing the route have the incredible fortune and honor to have the entertaining Danilo take us on the same ride on his boat from Corte Sant Andrea to Soprarivo – 4.3km downstream. Danilo made the whole experience enjoyable, entertaining and great fun.  I wish I understood half of what he said but the arm sweeping gestures, rolling eyes, infectious laugh, etc. was understandable enough. After the ride, he invited us to his house to stamp our Credencials with the world’s largest stamp and also to record our names and details in his massive ledger.  After unloading the boat though, he gave us two minutes of culture in explaining that the pillars on each side of the ferry crossing were from Roman times  and you can see the Christian symbol of a fish carved into the base of one of the pillars. 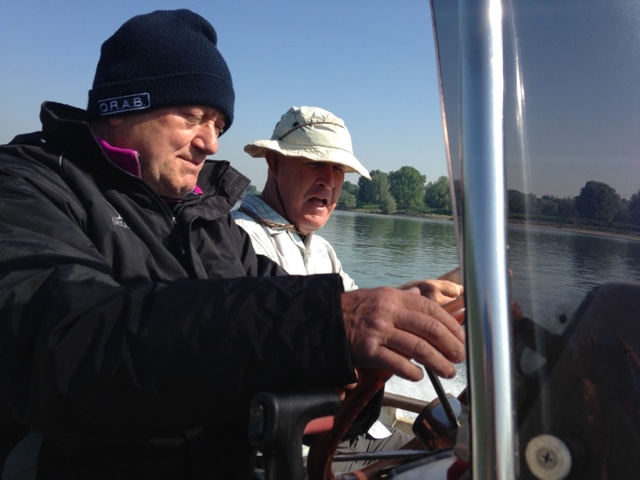 Danilo asking me for advice on how to steer a boat. :p

Before Danilo sent us on our way, he asked a favor of Melanie and me.  As the only two native English speakers in the group, he asked if we could stop at the school in nearby Calendasco and speak to the students in the high school English class.  How could we refuse, even if we wanted to?  We readily agreed so we walked the 2.5km into town and met him out front after he drove the route.  Inside, already speaking to the class, was Brian Mooney, the head of the English chapter of the Confraternity of the Via Francigena and one of the very few modern day pilgrims to walk from Canterbury to Rome then back to Canterbury again.  He seemed surprised to see us as he was already telling stories of the walk to the teenagers.  He eventually did give us a chance to talk so I told the story of the miracle walking stick. The students seemed to enjoy it but by the time we got out of there – due to the long class, late start to the day because of the ferry timing and the time learning culture from Danilo, we had now walked only 6km and it was noon already.  We still had 21km to walk in the day and the first thing we needed to do was get some lunch. 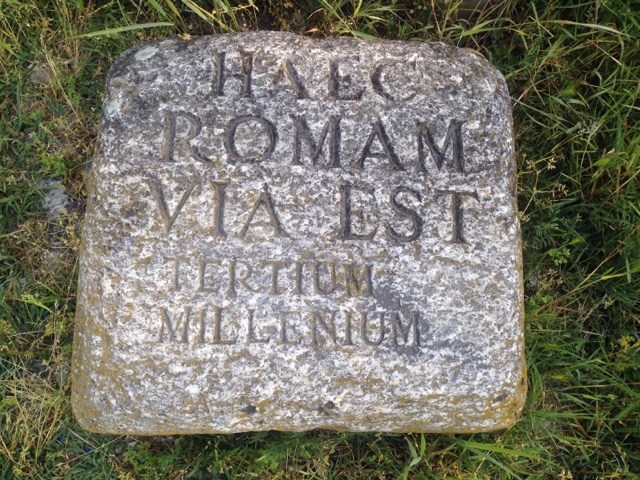 At the ferry point 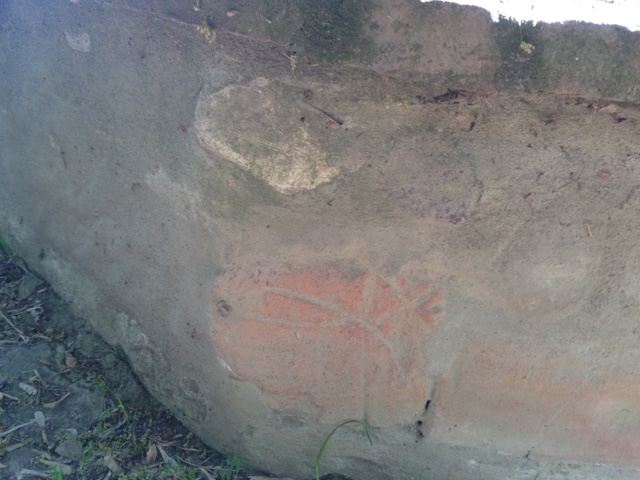 The base of the Roman pillar

The rest of the day, through Incrociata, Contrebbia Nouva and Malpaga was simple but fairly boring walking along the decent road shoulders. Once we hit the bridge over the Fiume Trebbia river, things livened up a bit. There was a notice at one end of the bridge that it was built a few hundred years ago. Normally, that’s enough to impress me but it went on that the current bridge replaced one that some guy named Caesar had build a really long time ago.  I guess that’s even more impressive.  All the way into and out of the beautiful old city of Piacenza was basically along two main thoroughfares, lined with old churches, palaces, mansions, grand municipal buildings as well as more meagre commoners’ housing. 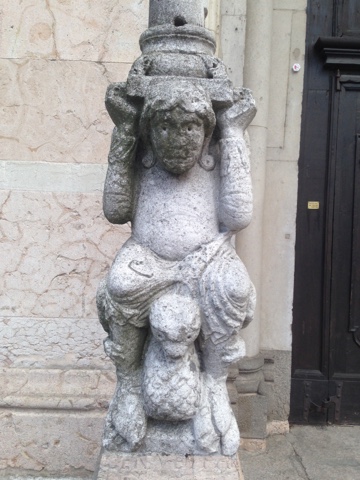 A pillar at Piacenza’s Duomo

We decided to shorten tomorrow’s long stage by doing 5km extra today. That took us just beyond the ring road around the lower half of the city.  The ostello is in the refurbished priest’s house that is several hundred years old.  The job done to make it nice is really impressive and we still get to see some of the original architectural features. One thing that they still keep on the roof, and use generously, is the church bells.  After 9:00pm, they stop ringing but I bet we are up for the morning Angelus. 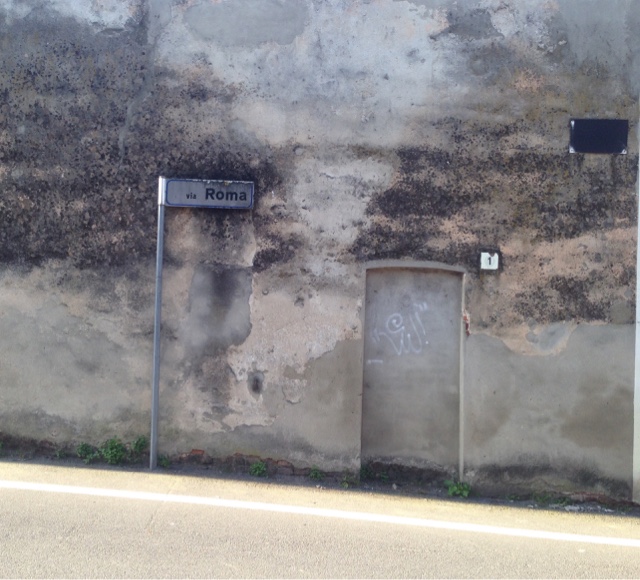 Before leaving Orio-Litta, just before the old palace, I noticed we were on the Via Roma (Road to Rome or Rome Road). How true. 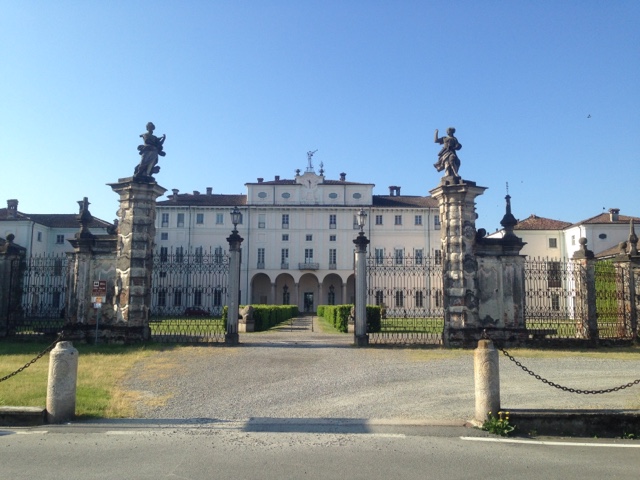 The old Palace in Orio-Litta 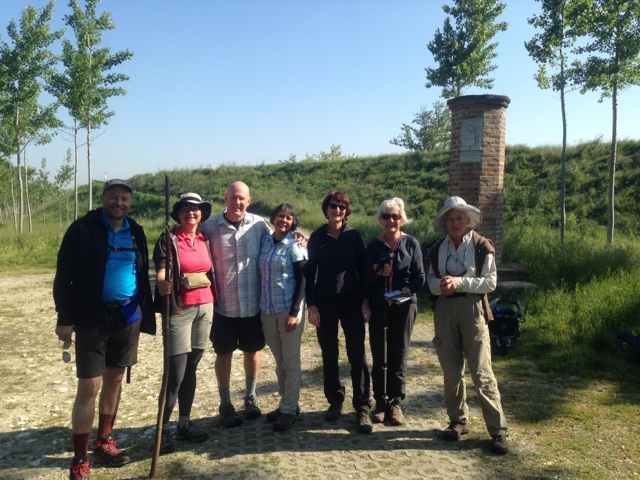 Just before taking the ferry, the gang that we have been hanging out with over the past few days. Swiss Tierry, Dutch Alice, me, Melanie, Dutch Herda and Yvonne, 80 year old French Monique (who had kayaked around Corsica as well as the coast of Scotland)