Another short and chilly day but this walk was mainly from small village to small village.  The paths between villages varied quite a bit though. We still are in the flat lands, now the Po River Valley, but there were finally some minor little steps up and down. Who knew that I would one day welcome a hill?

After a quick bite at the cafe across from the ostello, we walked the short distance to the Santa Cristina train station. No, we didn’t take the train, the route went right past it. Maybe we should have taken the train though because as soon as we passed the station, we turned right down what was supposed to be a dirt path.  There was likely dirt under there someplace but on top of it was waist-high grass, wet with dew.  We l plowed through it until we reached a gravel path but that was 600m of soaking wet legs, pants, shoes and socks.  That wasn’t the start we expected but it was much better the rest of the way. 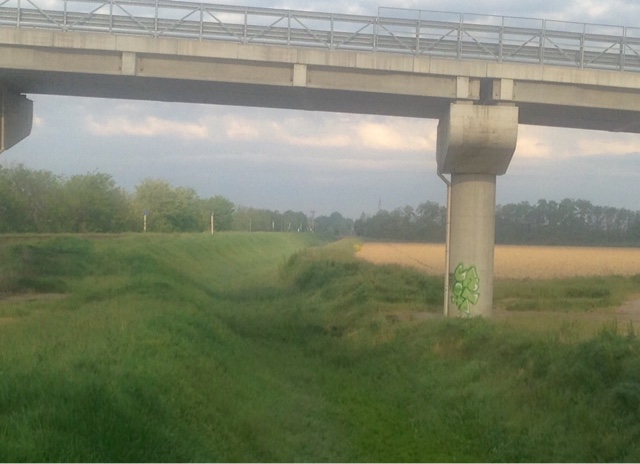 The “path” was between the ditch and the plowed field.

The next couple of kilometres to Miradolo Terme was mostly on dirt or gravel paths, perfect when the weather is dry.  In Miradolo, we watched all the kids being walked to school by their mothers but we also were keeping a eye out for a cafe toilet break.  Sadly (for Melanie), there was no cafe to be found. We then walked briskly along a brand new, purpose built Pilgrim path that paralleled the road at a safe distance to Camporinaldo.  Melanie managed to walk the whole 2.5km with her legs crossed.  Finally we made it to a cafe that fortunately also had a toilet.

With breakfast #2 and pit-stop #1 completed, we crossed the train tracks and headed out towards some twisted turns on a gravel path.  Apparently they are building some go-cart tracks in the area and some previous Francigena paths had to be moved.  We missed one turn from a clear gravel path onto a grass field but that only cost us a couple of hundred extra meters. For a short distance from there though, we could not make out some paths and we used the GPS to get us to the next marked trail. It was not too challenging but we wondered how the other pilgrims from dinner last night would make it.  So far, all but one has showed up at today’s ostello.  Once the path straightened out again, it was a easy trail to Chignolo Po.

From a distance, we could see that Chignolo Po had something special to offer.  A very tall turret could be seen from some distance away. Soon enough, we reached the very impressive looking Castello Procaccini.  I’ll have to Google it later to see its history but if we ever sell our house in Singapore, this one might just replace it. 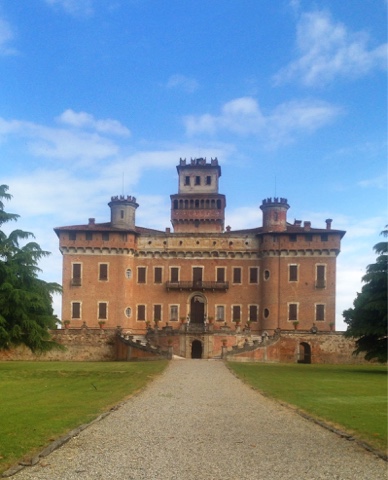 After castle-drooling for a short time, we headed towards Lambrinia.  Unfortunately, much of this 2.5km section is on the shoulder of a fairly busy but narrow two lane road.  Most of the time, there was enough road shoulder to walk on but not always.  Most of the time, the road was straight and easy for drivers to see us, but not always.  In a couple of places, along blind curves, the shoulder was non-existent and cars were racing by at 70km/hr. At one particular blind curve, we had crossed to the outside of the curve to give drivers from both directions more time to see us. There was almost an accident when the driver coming from behind slowed down and moved away from the shoulder we were on but the driver coming towards us didn’t slow down or keep an eye out at all.  Fortunately, only loud horns and some cursing were exchanged, rather than insurance details.

Just after that episode, we happily greeted three pilgrims who are walking the 3,000km from Rome to Santiago de Compostela in Spain.  An Italian man who met a Spanish woman on the Camino Frances last year and they decided that this was the next adventure in their life.  They were joined by another Italian man somewhere along the way.  We had a great long chat – still standing in half a lane of that busy road – but cars slowed down for the group.  After exchanging information about what is ahead for the next few days for each of us, we wished them a Buen Camino and waved goodbye. They only have about 2,300km to go.

In Lambrinia, we had a short break on a bench and then finished up today’s walk by crossing the Fiume Lambro river and taking another brand new gravel path, complete with embedded pilgrim logos, into the small town of Orio-Litta.  We quickly found the Casina San Pietro, our hostel for the night and checked in.  It is another donativo ostello so 20€ is our contribution for a bed. 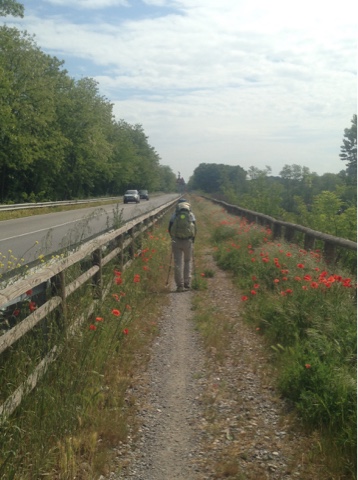 Just about to reach the bridge over the river

We have already done the duties for the day, ie., showering, tending to our feet, washing clothes, hanging them out to dry, preparing clothes for tomorrow, finding an open bar for a sandwich, checking out upcoming stages, seeing what accommodations are available in the next town, etc. and it is only 5:00pm. It’s time for a catnap!  By the way, you will be able to tell if we find an Internet connection by when you see this post.  Life is good.  Peace y’all.

p.s. For the second day in a row, we could not find any wi-fi so this post is very late. Also, we had a fantastic pilgrim’s dinner that our host drove us to.  We had mounds of the best spaghetti with clams and mussels then a plate of roast beef, sliced paper-thin served with olive oil and spices and a salad. A couple of bottles of wine and water brought the bill up to 15€ per person. The wonky drawback was the cold 20 minute walk home. We’re not used to walking that late in the day! 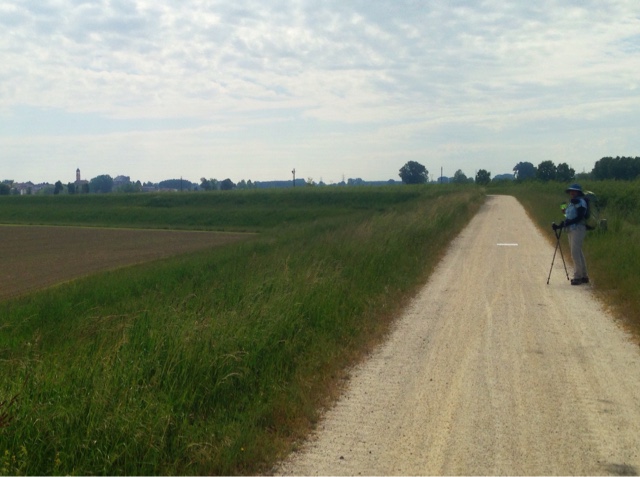 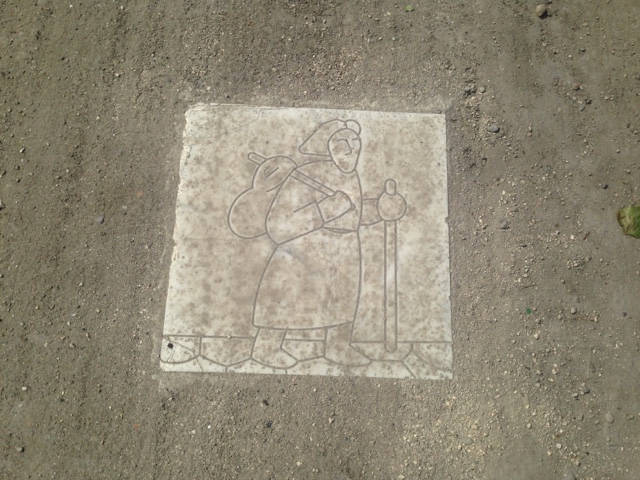 Our own path into Orio-Litta 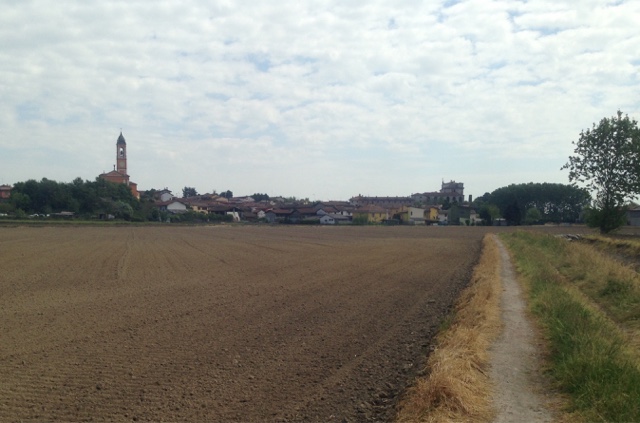 Orio-Litta closer in.  Our ostello for the night is right next to the church bell tower in a refurbished but former grain storage building built in the Middle Ages.

Our beds are in the tower! 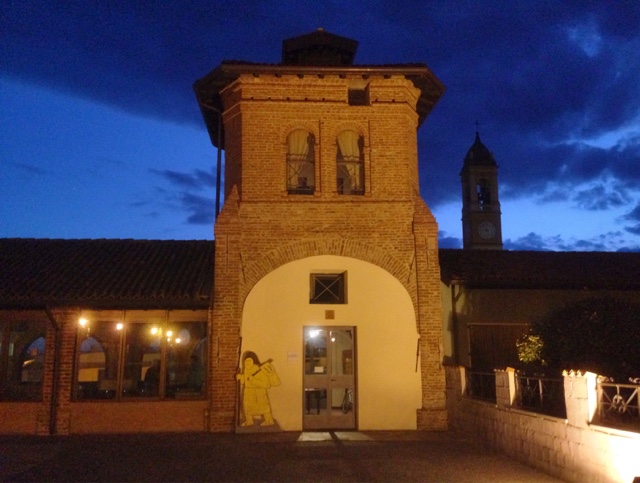