A bright and sunny day but, boy, did it start off very chilly.  Even walking in the sun, the cold wind was going through us. I went so far as to put on arm warmers for the first half of the day.  Melanie was content in her long compression tights under her long pants and shirt, at least content enough to just let her teeth keep chattering. 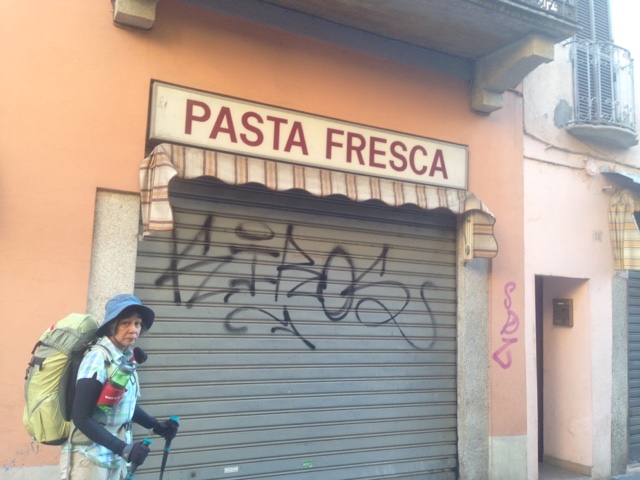 Melanie is not happy after locating the head office of Pasta Fresca :p

It was a lovely walk, still 99% flat, still through farmlands and rice fields but with more variety too.  We had some extra walking to do to get from the train station in the west of Pavia back to the center of town so we decided to take a more direct and shorter route after Belgioioso through Corteolono to Santa Cristina.  This shortcut saved us about 4km.  It was actually a decent route, with the dirt path connecting Corteolono to Santa Cristina being a fantastic shaded route. The rest was walking on the shoulder of the main two-lane road which was easy and safe most of the way but only got a little hairy where it got curvy a kilometre or so before Corteolono. 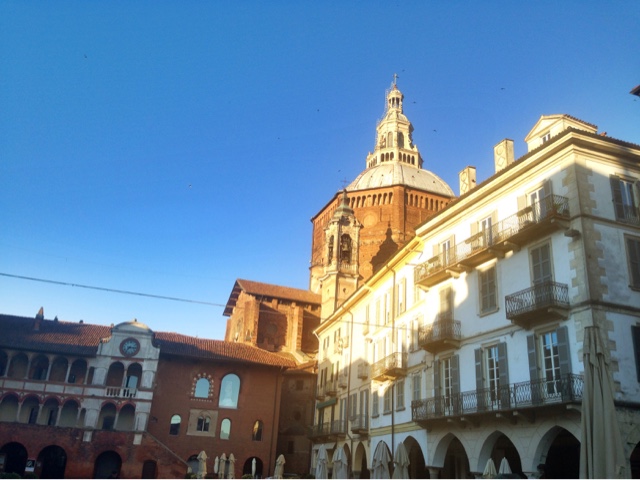 Finally, we used the phone to call ahead for two beds in the parish house of Santa Cristina and it worked like a charm.  It was so much nicer that we know where we are sleeping and I have already made reservations at tomorrow’s hostel too.  With us tonigh are our two Dutch friends who we have run into several times, another Dutch woman, a lovely 80 year old French woman and a young Swiss man who came in with his backpack on a cart pulled behind him.  Seven of us together; it’s getting crowded!  We actually walked a bit with another young Italian couple but they were just doing the single stage today and taking the train back to Pavia this afternoon. 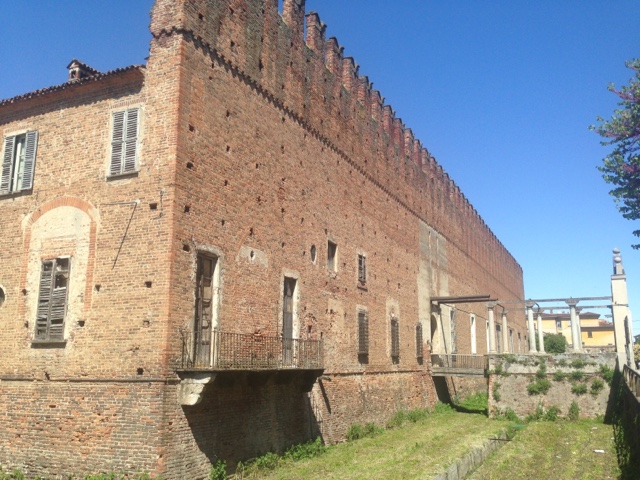 Belgioioso’s castle.  When I first saw it, I thought it was an old factory.

The parish house, our home for tonight, has three rooms with three, four and five beds in them.  The one bathroom has a washing machine that we can use which is an unexpected luxury. The only drawback is the shower and half of that reason is related to all shower stalls in Italy that we have seen so far. Imagine a coffin, standing on its end, with a nozzle at the top. That’s the size of every shower stall so far.  The two tiny doors close you in to such a claustrophobic spot that if you drop your soap, you have to turn off the water, open both doors, step out then bend over and pick up the soap. In this hostel, one of the doors does not open so getting in and out is an extra challenge for me.  If I had pasta for lunch today, that would have made a difference of taking today’s shower or having to just use a washcloth at the basin for a bath. 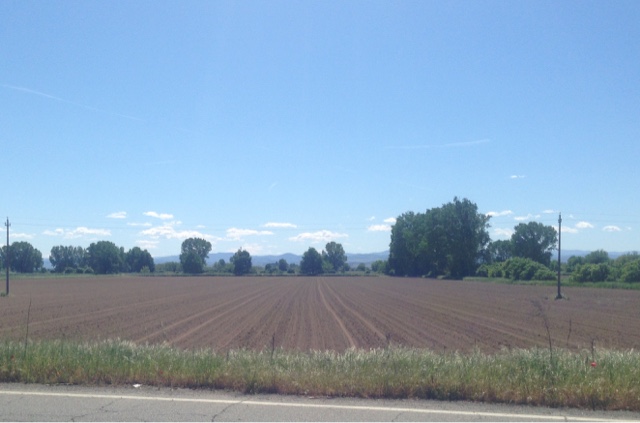 The hills of Tuscany to the south

We found out from the young Italian couple that today was a national holiday in Italy which explains the quiet departure from Pavia and the increased number of cyclists.  Some stores and bars were closed but we still managed to stop for food or drinks four times today. Two of those were more for toilet breaks though. The holiday is called Liberation Day.  Uh oh, I asked the couple if that meant that we (Americans) were the bad guys in that equation. They replied with a sheepish “yes” but after doing some research, I’m not sure why. It celebrates the fall of Mussolini and Fascist rule as well as the Nazi “occupation” of Italy. Okay, we killed a lot of Italians but getting rid of Mussolini, Fascists and Nazis was our also goal too, no?  Anyway, I wish all Italians happy Liberation Day. 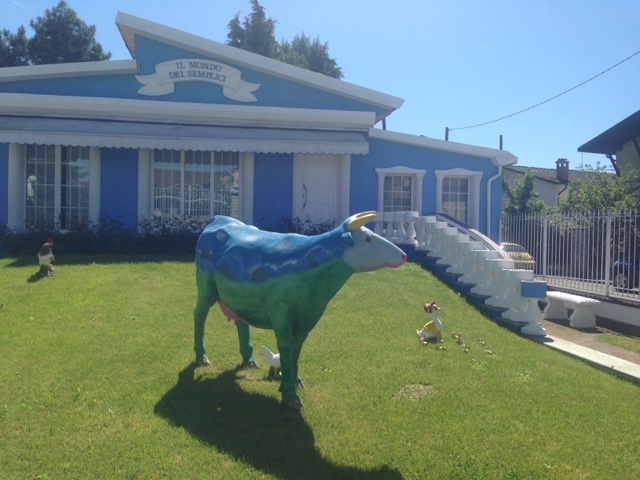 By the way, we were told to take a large amount of bug spray with us as the mosquitos around the rice fields would eat us alive.  I think I wasted the 10€ that I spent on it because we have yet to see a single mosquito! Apparently, they come out in force later in the summer but it’s still too cold for them now.
We all are heading out shortly for a pasta dinner that a local restaurant prepares especially for pilgrims. I can’t wait but I hope that I don’t get dirty eating it. I would not be able to shower.  Life is good. Peace y’all.