Today turned out to be a little bit crazy but mostly in the end. Sundays on these walks are always a bit of an extra challenge in Catholic countries for a few reasons. First, many restaurants, cafes, bars and stores are closed at least until we have finished walking. That means we can’t count on stops for breakfast, lunch or toilets. Sunday walking also means we get to compete with cyclists on the trails. The Italians are fast on their mountain and racing bikes and I haven’t met one yet that warms you that they are about to pass.  Buongiorno, ciao, grazie, prego, etc. are words that are foreign to them and don’t easily slip off their tongue. We can deal with them though.  If we see or hear them coming, we just jump off the trail into the bushes. As they pass, to irritate them, we say “boungiorno” or even “grazie”. That always gets a grunt in return.  If we don’t see or hear them until they are very close, we just jump and scream in fear and that usually gets them to crash into the bushes on the other side. You have to have some fun when you walk.

After leaving Garlasco, we had a pleasant walk along small canals, the last (?) of the rice fields and a bit of woodlands. In fact, all of today was rather nice and still very flat except our first mini-climb into the village of Villanova d’Ardenghi. That was only about a 20m climb but after three and a half days of pancake-flat walking, 20m is a mountain!  We reached this village at the perfect time for an early lunch and we were in luck.  They have a cafe right on the route that has a very large sign outside the door that proudly announces that they love to serve pilgrims on the Via Francigena. Right below the drawing of the pilgrim logo, in smaller print, is the phrase “closed on Sundays”.  I guess we weren’t that lucky today after all. 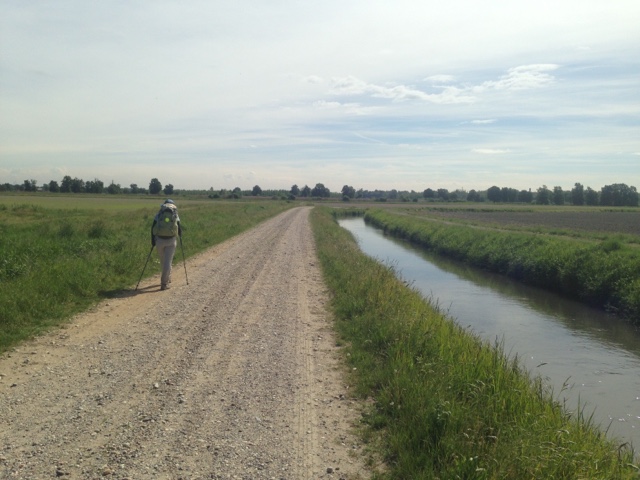 Before reaching Villanova d’Ardenghi, we passed through the lovely town of Gropello Cairoli.  Their main street through town was closed for a large farmers’ market. It was quite crowded and some of the vendors stopped us to ask what we were doing. The main excitement though was when they heard Melanie was from Singapore. You could hear them passing that news down from stand to stand so that everyone knew she was coming. 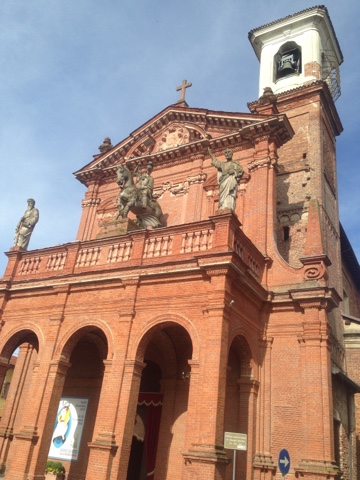 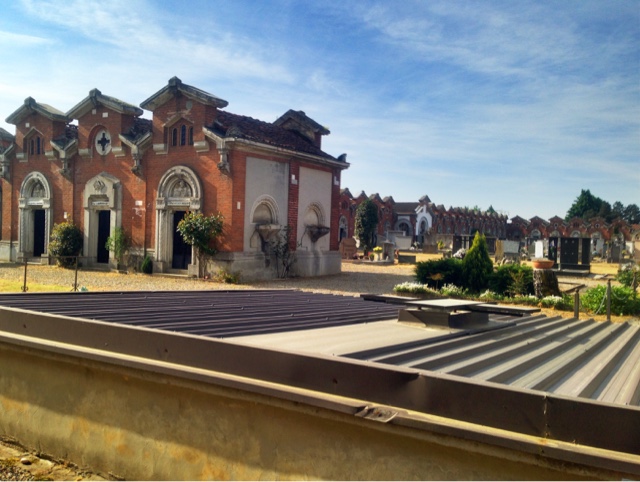 Closer to today’s destination of Pavia, we walked quite a bit along the Ticino River.  That often included portions through shady woodlands.  It also provided us two places to shortcut the walk some today by not following the winding river so close to the banks.  By using the shoulder of a nearby road and some new paths through the forest, we cut close to 2km from our total.  Sadly, we more than offset that savings with extra kilometres later in Pavia itself. 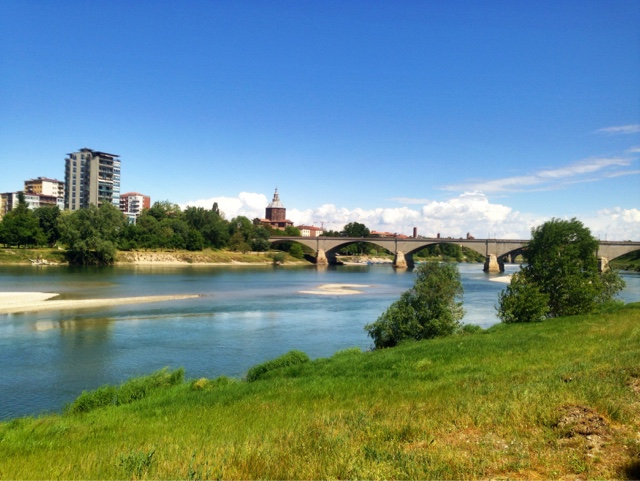 Just across the river from Pavia, with supposedly 1km left into town, we were very surprised to be overtaken by the two Dutch ladies we met yesterday. They had walked an impressive 8km more than we did yesterday to Gropello, in order to have a shorter day today so they could get into Pavia early. They explained that they changed their mind a bit and took a two hour rest in one of the villages near the route. That was a surprise. They stayed in a hostel on the south bank of the river while we waved goodbye and headed for a hostel at a church just on the north side. I think they won. 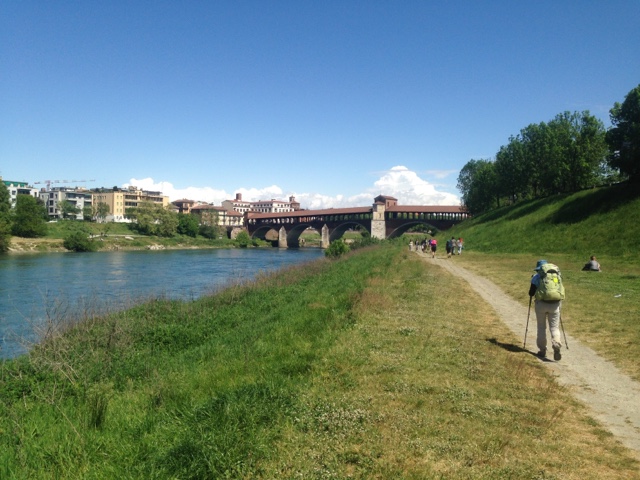 Finding our hostel was easy. Sadly, it only had two beds – a very small hostel indeed – and both were occupied. We decided that we were too tired to walk back to the hostel south of the river so we starting asking passing Pavians if they knew a place for us to stay.  One very kind woman told us of a nearby bed & breakfast and even walked us there. Sadly, that was also full.  She helped us call another one but it was also full. She then directed to the Piazza Doumo where another B&B was.  Of course, that was also full.  Is the circus in town? All this while, we are moving further and further away from the hostel south of the river that we thought has beds available. In the end, we headed for the train station where, apparently, every hotel in the city is located. We checked into the expensive Aurora Hotel. Don’t ask about the price, we were too tired from walking all over the city. 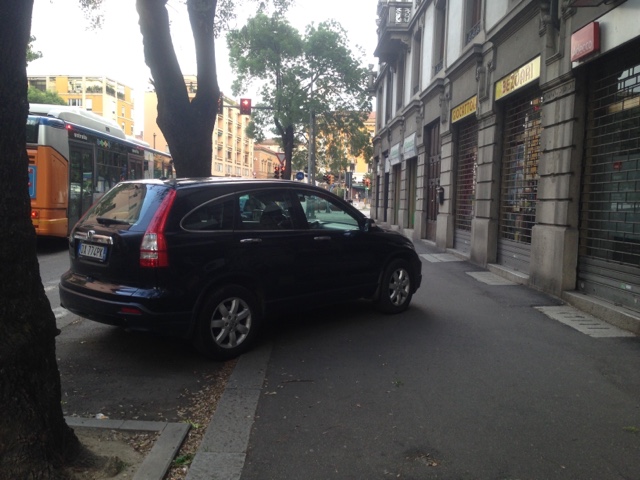 How to “parallel” park in Pavia when someone plants a tree in your way.

That reminds me, I am including the costs of accommodations and some other things to assist people who are reading this who also happen to be planning their own walk through Italy. Also the distances in the headings are calculated as best as possible.  Normally, I would just take the distance from the guide book but I also add or subtract calculated distances where we shortcut the marked route, got lost and did extra walking or ended up having to search for a bed, etc.  The distances are from bed to bed.  The times quoted are also from bed to bed. Today’s walk took a long time but that included a lengthy stop in Gropello Cairpoli, short nature calls and more than an hour looking for a bed in Pavia.  I really need to use this phone we managed to get.

Finally, for those following us, I found that my smartphone based GPS was invaluable today. While the trail is quite well marked, at least four times today we would have had to guess which fork in the trail to take.  Maybe taking the wrong one would have been obvious sooner or later but I loved the certainty that the GPS gave me.  I rarely have to look at it and my phone’s battery power never goes below 60% on the walk so I am loving Maps.me with the GPS files load for the route. 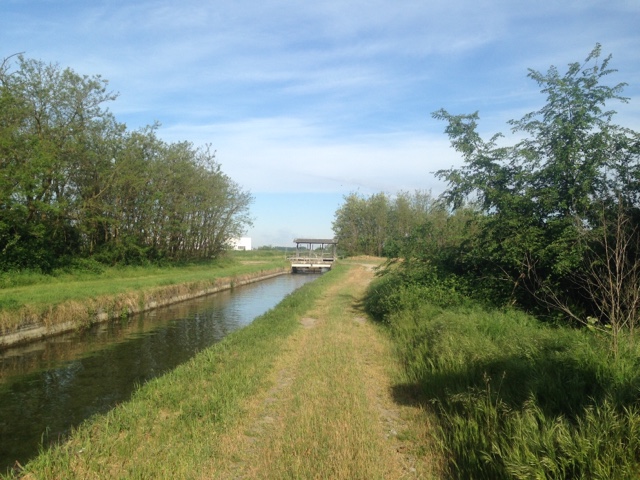 Life is still good but our legs are tired. Actually, after our first real full-on big Italian meal of the trip, our whole bodies and minds are tired too. Maybe it was the wine and grappa.  Who knows?  Peace y’all.