Skip to primary content
Today was a glorious day for walking and a glorious walk indeed. Our guidebook suggested taking the “old” official, more direct route through Remondo towards Tremello then Garlasco. The new official route bypassed Remondo to the south of the rail line and zigzagged between rice fields most of the way. The worry was missing one of the many turns and doing extra mileage. We did take the old route and I HIGHLY recommend it to anyone following us.  As best as I can tell, we saved a little over two kilometres taking this way but, more importantly, we passed through a fair amount of shaded woodlands and non-rice farms as well.  It was mostly on a dirt or sand path with occasional gravel or tarmac and the scenery was better than the last two days. As soon as we left the hotel in the morning, we saw that we had a good chance for rain.  The overcast skies, chilly wind and high, cool humidity is perfect for walking, but only until the rain starts.  I don’t sweat in this weather and the humidity keeps me from getting thirsty. We still wanted to do as many kilometres as possible before the rain did more than the occasional spitting, so our early pace was fast, at least fast for us.
Today’s first drama started almost exactly one hour after departure. The spitting rain was spitting harder so I asked for Melanie’s help in getting out my rain gear. She was helping me put on the rain cover for my backpack when she calmly asked if I was holding the other walking stick that previously was clipped onto the back of my pack. I then, not so calmly, let out a few, exceedingly loud, primal screams of horror. Yes, one of my walking sticks had fallen off my backpack. With tears in my eyes – these are expensive and very much needed sticks – I considered turning around and walking the 5km back to town. I really was that desperate. However, after some more thinking, I figured that the stick must have fallen off back in the hotel when I put the bag down for breakfast. I decided the best thing to do was hope that was true, continue the walk until Garlasco then call the hotel to see if they had it.  It would be an expensive taxi ride back to get it but it would be worth it.  After a few deep breaths to calm myself, I did something that my Mother taught me to do whenever I lose something. Silently I prayed “Baby Jesus, lost and found, please make that stick come around”. With that, I tried not to think about it and started to walk again, just sadder and angry with myself for my carelessness. 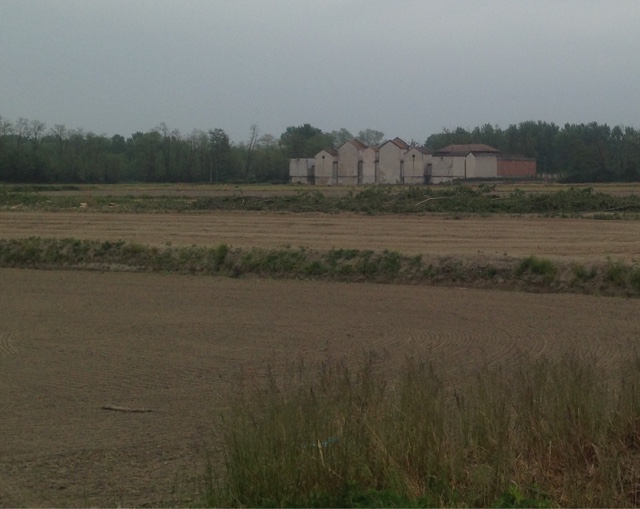 The next major bit of drama happened only two minutes later.  At this point we were on a dirt farm track that was very narrow and sandwiched between a rice field on our right and a steep ditch on our left. A very large tractor was coming slowly up behind us and it was towing some even wider gear behind it. Not wanting to jump down into the rice padi, we balanced ourselves on the edge of the ditch and hoped that the dirt would not give way.  The farmer slowed down as he got closer.  We waved “hello”, signalled that it looked like he had enough room to pass and then leaned over the ditch a bit more. Just as he arrived next to us, he stopped, opened his door and handed me my lost walking stick.  Grazie mille! Grazie mille!  I had tears in my eyes. If you don’t believe that God watches out over his pilgrims, you must at least concede that he sends a guardian angel to protect us. I will forever be indebted to a random farmer who somehow saved our walk.

[edited later because I am still amazed about this story] If it had not started raining exactly when it did, the stick would not have been returned.  Two minutes later, the farmer would have turned into his field before passing us.  If Melanie had not noticed the missing stick, we would not have been around long enough to see the farmer.  The stick must have dangled off the bag for 5km before dropping in a spot that the farmer would be passing.  The farmer saw the collapsed stick from high up in his tractor’s cabin and recognized it as valuable enough not to ride over it.  My son is a farmer and he says that the last thing a farmer in a tractor wants to do is to shut off the engine and climb out of his tractor – yet this farmer did just that to pick up the walking stick.  What if I had not decided to then carry my remaining stick in my hand?  Would the farmer not have seen the match and just driven past with his new acquisition?  So many questions.  You better believe that I thanked both the farmer and Baby Jesus.  Every single farmer in a tractor who has passed us since that day has gotten a smile and wave from me too. 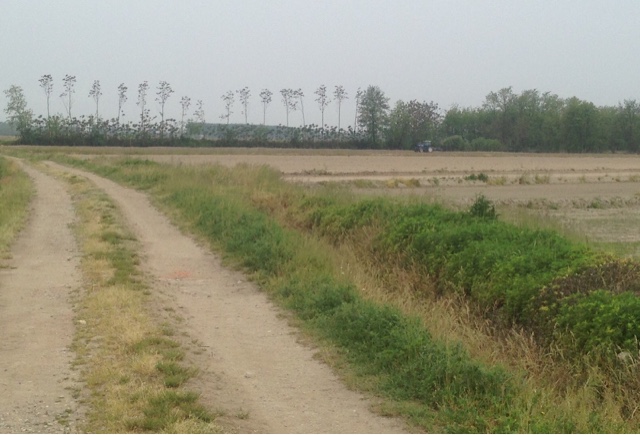 After that, the rest of the walk was mundane by comparison. In Remondo, we met two fellow pilgrims from Holland. They are only going as far as Lucca this time but have walked this far from their homes in Holland in three earlier sections. In summer, they intend to return to Lucca to finish their impressive trek to Rome.
In Tremello, we were met by the local Via Francigena africonado. He had cycled out to greet us at the edge of town and then walked us to a local cafe.  We had a sandwich (ham and cheese sandwiches are apparently the only lunch meal available in all of southern Europe) while our new friend went off to the church to get a stamp in our Credencials. He quickly returned with the stamps as well as a town pin for our backpack or hat and a certificate of having passed through the great village of Tremello. 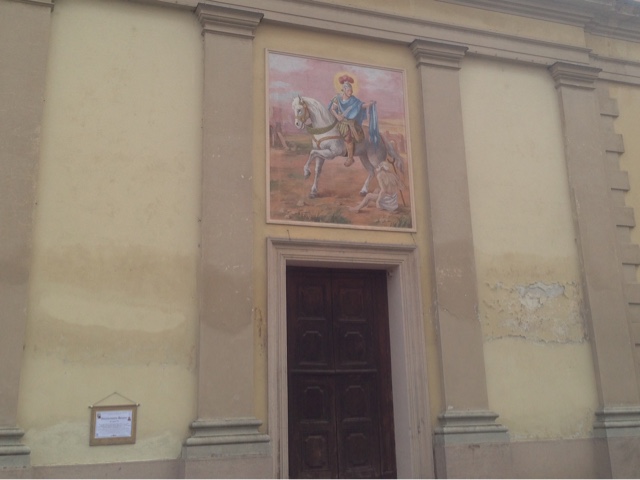 After another 6km, we reached Garlasco then asked for directions to the Santuario Madonna della Bozolla, a religious community which offers beds to pilgrims. Sadly, that place is two kilometres north of town, off of the Camino. We could have done the extra 2km today but we didn’t also want to do it again tomorrow morning. After a visit to the beautiful church of San Rocco, we backtracked to the Hotel Il Pino, a lovely little old place on the main road, just inside the town. For 50€, we not only get a decent room, hot shower and breakfast but we get something extra that we have missed the past few nights – wi-fi!  Life is great and thank you Baby Jesus! 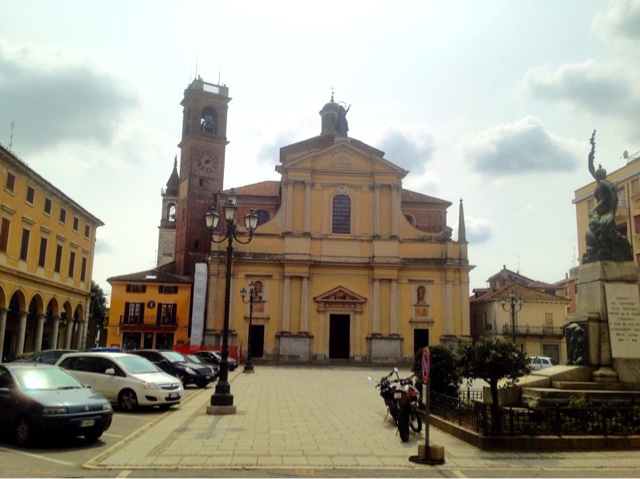