It sure was good to finally get off the Strada Statale 62 Della Cisa, the road we have mostly walking on the past three days.  With a gloriously sunny day out the window this morning, we were excited to finally be back on the proper Via Francigena path.

Before walking though, we still had to deal with breakfast and paying for the hotel.  I have to say that last night’s sleep was the best we have had.  The room may have been small but the bed was very comfortable and warm.  Once again, with a short day planned, we slept in a little and waited until the 8:00am breakfast time.  Once again, we got taken. Between us, we had a single coffee and two hard rolls with butter.  After breakfast we found out that it was not included in the price of the room so we had to fork out another 8€.  At least the dinner and room were reasonably priced (32€ / 50€). 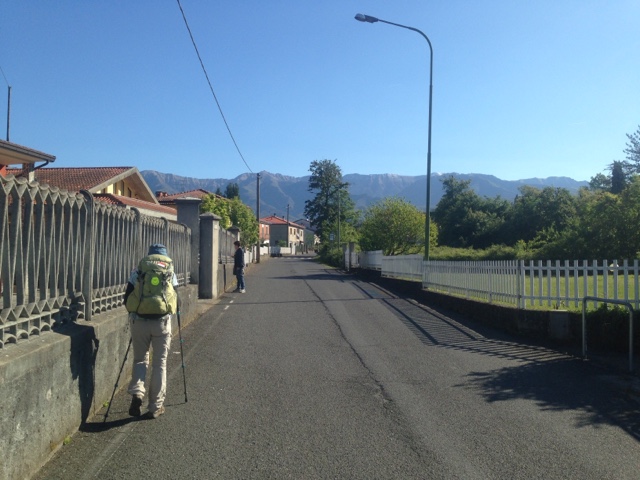 Heading towards the castle but the mountains we crossed the past few days are in the distance.

<When we set off this morning, we were guided by VF signs as well as GR red and white blazes to head northeast instead of the expected south.  We figured that we were being sent on the tourist route but it turned out to be a good way. The route went about 3km by small roads to the Castello di Virgoletta, a castle and village that is somewhere around 1,000 years old.  The houses, church, castle, alleyways and stairs under archways, etc. all look like they came out of Medieval film set. 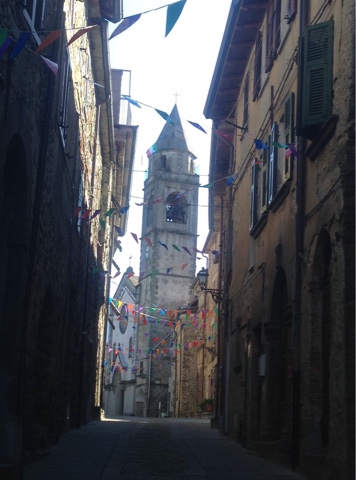 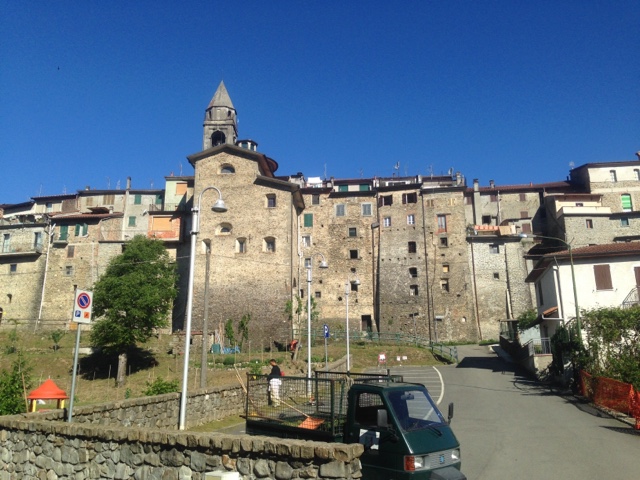 After walking through the middle-aged town, we soon were in the forest on a lovely dirt and rock trail.  Getting out of the sun, we were pleasantly cool under the tree canopy.  The trail was hilly but beautiful.  A good portion of it was obviously along old Roman roads although they are hard to date here because the Romans were always here!  We edged near the hamlet of Fornoli and a few other houses but mostly we were on old trails deep in the forest for about 8km before being unceremoniously dumped out at the northern end of Terrarosa, a small town on the north of the Torrented Taverone and we had to walk 3.5km through there, across the Taverone and through the whole of Aulla to get to our ostello at the south end of the city.  The road walking was boring again but there turned out to be an alternative. 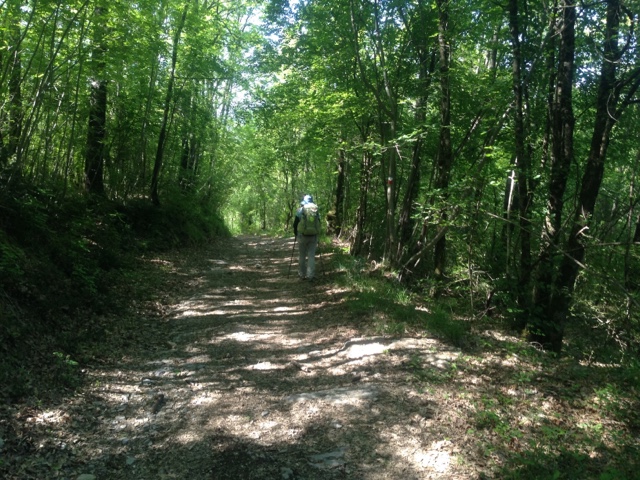 For those of you following us, the VF route through Terrarosa has changed.  At one point, we were being directed north at a T junction but our GPS said to head south on the SS62 across the only bridge over the river.  I chose to head south and that may not have been the best way.  I am not sure how long the detour to the north was but the SS62 is dangerous all the way across the river.  It also turns out that the rail line here has been discontinued and turned into a green walking corridor.  The best and shortest option may have been to get onto the rail line as soon as possible and just follow that into Aulla. 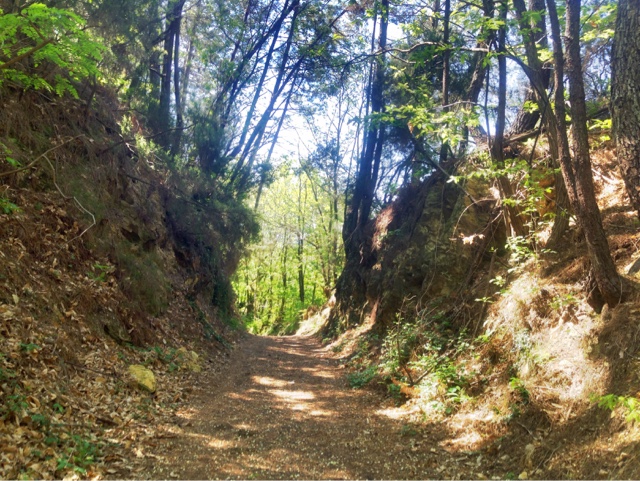 The ostello (Abbazia San Caprasio) we are staying at is run by the church and is fantastic.  There are only four of us in there so far (including Monique who we met in Orio Litta and a Danish man walking from Pontremoli) and with three rooms of beds, we have our own room.  They also have the best place for drying clothes so we have washed everything.  We may not have to be sent to the back rooms in cafes and bars for a few days. 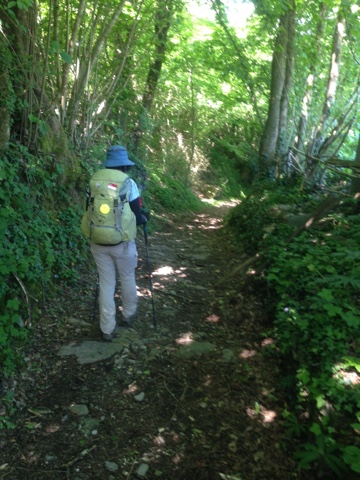 With the short day today, despite the late start, we were able to sit in the piazza by 3:30pm, soak up the atmosphere and sun, have a very cold beer / glass of wine and rest our toes.  Life is good.  Peace y’all. 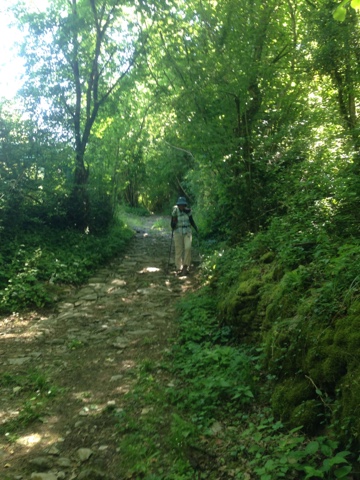 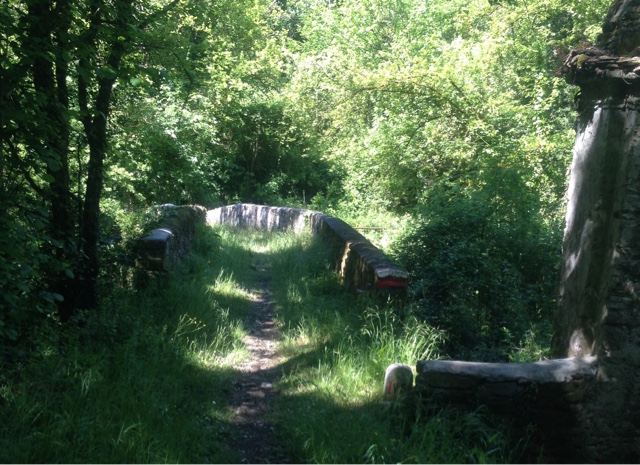 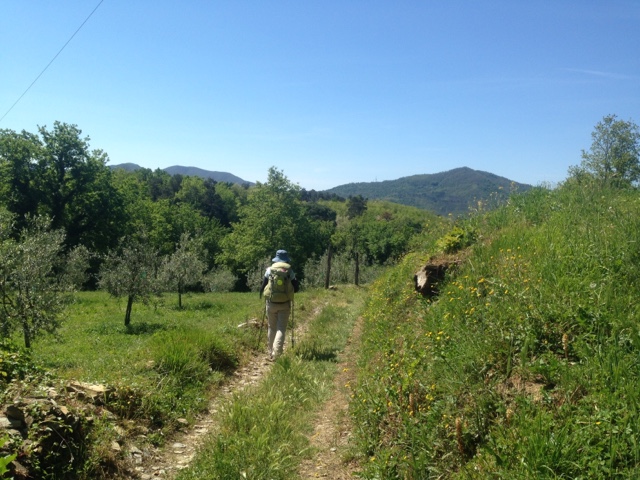