Before I tell you how enjoyable today was, I should add a note to yesterday’s post.  After sitting in the piazza and posting to the blog, we went back to the ostello, brought in our laundry and met up with old and new friends.  Monique, the 80 year old French woman was staying in the same place as well as Yvonne and Gerda, the Dutch ladies.  We also met Anders on the trail, a young Dane just out of the army and he was also staying in the same ostello.  We decided to all go out to dinner together.

The dinner location was chosen because of a man that roams the streets of Aulla, looking for pilgrims. As we walked into town, we headed for the old section but once there, we needed to ask where the Piazza Abbazia was.  Hmmmm…. Who should we ask?  Here’s a man that seems to begging to be asked and when we do, he says to follow him.  He led us through the winding labyrinth of the old town, talking the whole time in Italian.  I think he is saying that we are the 8th pilgrims he has helped today.  He takes us to what we think is the ostello but then tells us that he runs a restaurant and we should have dinner there, if we want.  I would like to return the favor so I say that we will.  Now he leads us in a different direction (to show us where the restaurant is???) so we are again in pursuit. Strangely, he stops outside a church and I see the name of the Piazza Abbazia on the corner.  At this point, the penny drops.  This man runs a private ostello that he took us to first.  He has eight pilgrims staying there and wanted us to as well.  Oops.  Well we were at the church’s ostello now so we stayed there but we did go back to the man’s restaurant for dinner.

Dinner was a typical pilgrims’ meal of pasta (testerolli in pesto / parmasian), a salad, a meat dish (veal rolls with cheese and Parma ham), a cake dessert and wine / water for 20€.  I think it would have 15€ if we had stayed at his ostello but it was still good value.  We laughed throughout dinner about what we all got up to the past few days but the best portion was once the ladies found out that Anders was just out of the army and, in particular, part of the ceremonial Danish Guard unit that protects the queen.  After “sleeping with” the Swiss guard the other night, these ladies were once again in heat.  Men in uniform!  I even had to hold Melanie back.

Now, back to today, the short but strenuous walk started out in the chilly morning but was soon in the blazing sun.  After a very short walk across the bridge out of town, we were almost immediately in the forest and climbing.  We were mainly heading south all day but with lots of twists and turns to navigate the mountain trails.  We only climbed 500m but it was often a steep and narrow path over the first 7km.  After that, it was all downhill, again, often time in a steep and narrow path but neither was a big issue.  After the previous days of walking, we have gotten stronger and stronger.  We worked up a good sweat but it wasn’t difficult. 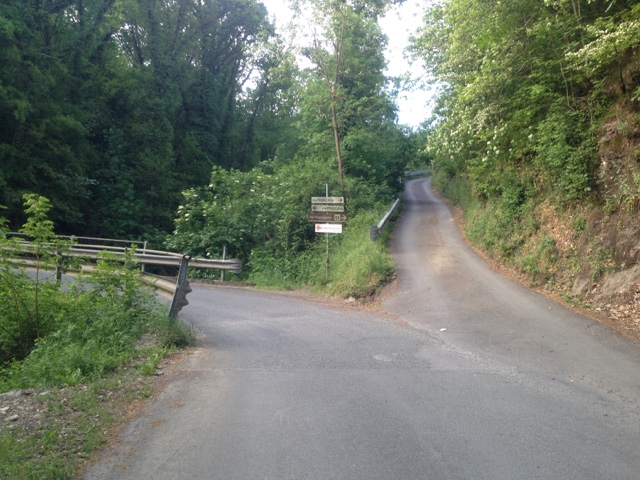 The start of today’s climb. What’s wrong with the path on the left? 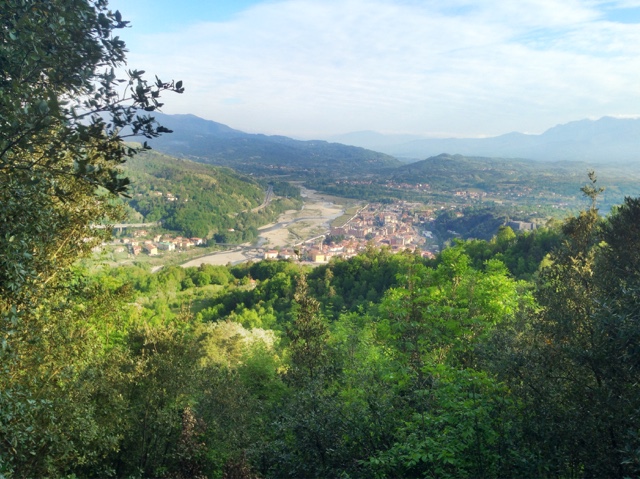 After an hour, I can still see our ostello from last night.

After a half hour and again after one hour, we were rewarded with views back down on the town of Aulla.  We also had so great views up to a hilltop town (Bibola?) and later views back downwards to the same hilltop town.  Finally, we could also take in the whole Magra River valley from Caprigiola to Ponzano to Sarzana.  We also passed through Ponzano Superiore, a stunning hilltop village. It was all beautiful.  We finally dropped out of the forest after walking through the ruins of a 11th century castle and into the outskirts of Sarzana.  The last four kilometres went a little slowly but we eventually reached the intended bed for the night, next to the train station. 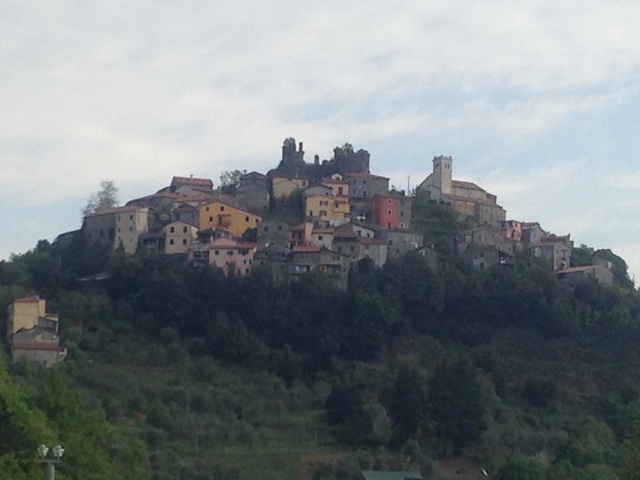 The place next to the train station (Locandi de Limone) we thought was a hotel with 40€ rooms.  It turned out to be a 60€ B&B.  We made the awful mistake of turning down the offer.  At this point, we headed towards the Convento San Francesco D’assisi.  Being Jesuit trained, I should have known not to trust the Franciscans. 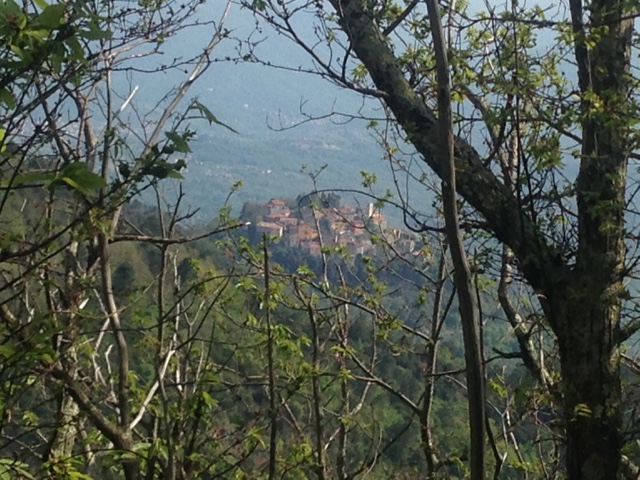 Back, now DOWN towards Bibola

We ran into Anders and Monique on the way to the Convento and found out that it wasn’t open until 2:30pm so we waited outside.  After a while, a woman across the street told us just to ring the bell so we did.  With Monique as the best with Italian as the interpreter, we think we were told through the intercom to go away but we weren’t sure.  Eventually the door buzzed and we opened it.  I think the woman who answered the bell did this by mistake because she was still rambling on while we walked in.  Inside were a few rooms with chairs and tables and a single bathroom but nothing else – including people.  We sat and waited until 2:45pm then I went outside again to ring the doorbell.  From across the piazza, I got a scolding from two woman as they walked closer.  “Stop that.  You will wake the …. Priest?”  I’m not sure.  While they gave me an earful, Melanie opened the door from the inside and the old biddies nearly fainted.  “You are inside?  Who let you in? Get out of there! Blaho, blaho, blaho” (that’s “blah, blah, blah” in Italian).  When Monique made an appearance, I think they stopped breathing and Anders put their pacemakers into convulsions.  Eventually they calmed down, showed us around, told us to take mattresses, pillows and blankets from the shed and put them on the floor around the tables.  Then they demanded our Credencials and a 10€ donation each.  After that, they started with the rules: inside by 8:00pm, out by 8:00am, blaho, blaho, blaho.  Melanie and I picked up our bags and walked back to the B&B, 20€ poorer, two hours wasted but wiser.

The B&B is a pretty nice place. 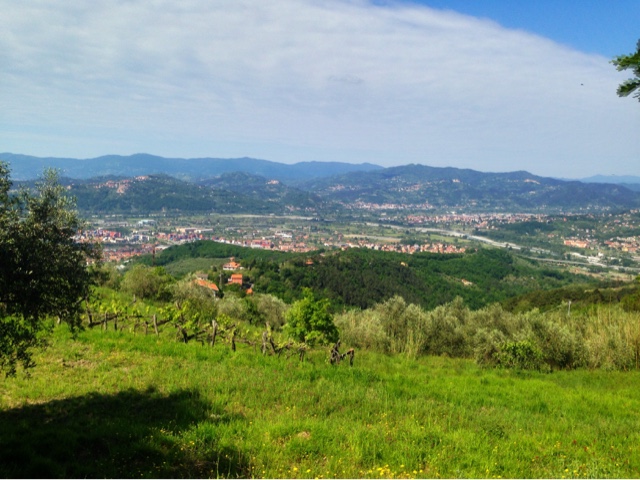 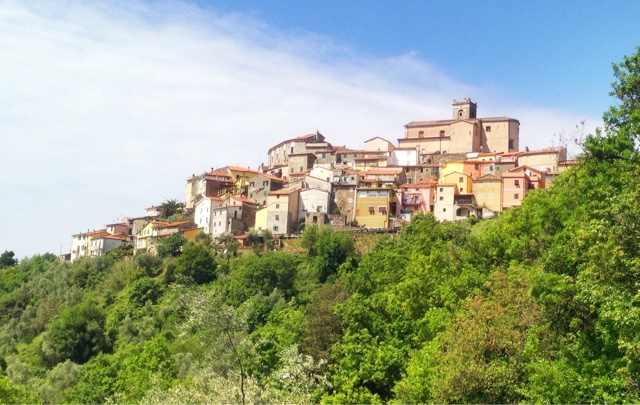 One last thing I should comment on is the bells at all the churches.  We love them.  They toll the hours, and sometimes the half or even quarter hours.  Sometimes we hear the Westminster chimes but sometimes the tolling is to the tune of Ave Maria, some Christmas carols or other religious songs.  The best thing as you are walking is to hear the sound on a bell in the distance in front of you, then near you, then far in the distance behind you as you also hear the tolling of he church bell in the next valley ahead.  The sounds mark progress in our walk. 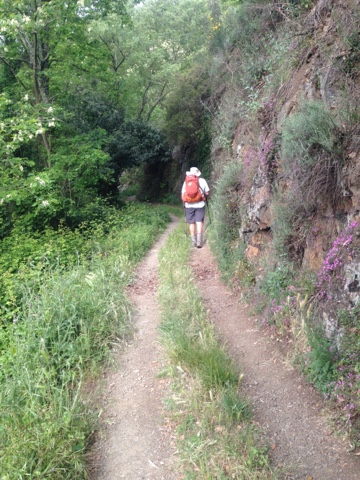 Heading into the abyss

We are happy.  Life is good. Peace y’all.