Last night’s dinner turned out to be rather late mostly due to the debacle at the ostello. We had a great meal but the best part was that the bar had wi-fi which allowed us to try to sort out today’s lodging in advance.  The guidebook only mentioned three religious ostellos and we need some time before going back to one of those, despite being to some nice ones recently.  We had another list of places to stay but it offered only two places, both already in the guidebook.  They did give more information about one of them though which almost sounded good.  “Only two rooms, one with two beds and the other with two mattresses on the floor in case of overflow.  Men only.  Half a kilometre from town, up a steep hill”.  That nailed it then, we are not going there.

We searched the Internet, maps, everything we could think off and there was nothing that looked good in Massa.  We tried Booking.com and saw only expensive places with the cheapest at 69€.  That one was in a good location near the route but had very bad ratings from reviewers.  That’s too expensive for a dump.  Wait! Here’s a place only 3€ more expensive with excellent reviews. It’s out of our budget (again!) but maybe we need to be pampered because today’s walk was advertised as a long 27.8km with a steep 200m ascent and descent near the end.  Let’s do it!  Hurry up and hit that button because Booking.com says rooms are going fast and this is the last one.  Quick, hit the Confirm button.

That was the mistake.  As soon as I confirmed the non-cancellable reservation, I got this awful feeling in my stomach.  Did I check the location of this hotel?  Oh crap!  It’s 3.6km from the trail. And what are those funny squiggly roads leading to it?  Nuts!  IT’S ON TOP OF A MOUNTAIN!!!  What to do?  We discussed a variety of options such as taking a taxi up the hill, calling up and begging for a refund, slitting my wrists, etc.  In the end, we said that we would decide what to do when we got to Massa.  It was going to either be a taxi up or, if we felt strong and had time, we would walk up.  We were not really sure how high it was, but we would find out soon enough. 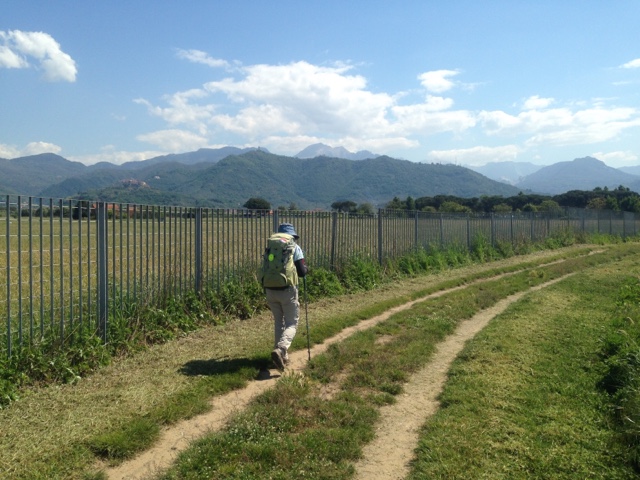 After a short walk out of Sarzana, we started on a rocky path leading up a steep hill to a castle.  From the top of the hill, we could just see our first glimpse of the Mediterranean Sea.  It reminded me that back when first I decided to go on this walk, I broke the news to Melanie little by little. First, I asked “Why don’t we go on a Mediterranean holiday”?  She may have had something in mind, rather that what we were doing now.  I’m sneaky. 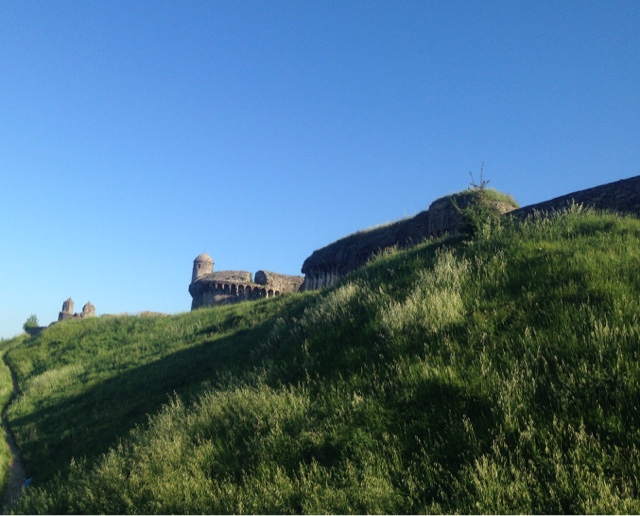 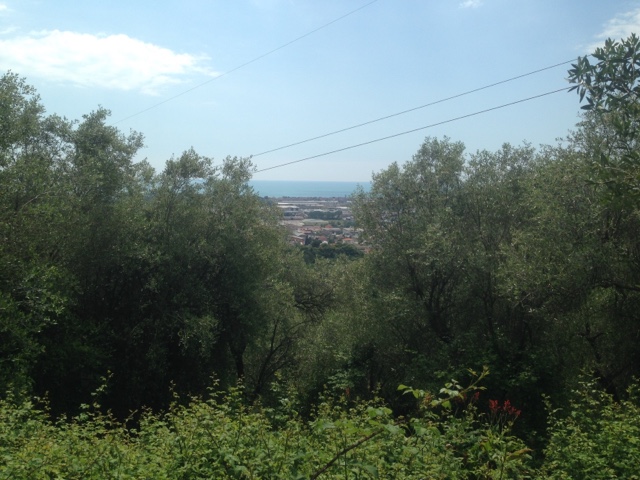 After rounding the castle ruins, we got onto a small country lane that, just as quickly, turned into a steep descent.  It was there that we ran into Monique.  She was looking lost and walking UP the hill towards us.  It seems she had been directed out of town the wrong way, in the first place, then she later asked someone else because she could not find any route markings and that person told her to climb up to the castle where she should see the trail! She should have just looked at the side of the road where she was and she would have seen from the markings that she was heading back to France, rather than to Rome.  We set her straight and then suggested that she follow us for a while.

The rest of the walk, other than on a dirt track detour near the Luni archeological digs, was all on small roads which was a little boring.  These rural and suburban roads led all the way to past Avenza.  Somewhere before that, we also picked up Anders so we had a parade of four pilgrims going into Avenza.  It was the that we split up a bit because Monique wanted to have lunch then sneak off to the train station so she broke away from the group.  A while later, Melanie and I stopped in a cafe for a sandwich but Anders was not hungry so he went on.  After lunch, we sat on a park bench to tend to our feet for a bit but then got moving again.  Much to our surprise, we rounded a corner to find Anders sitting in the shade waiting for us.  It turned out that his guidebook was old and sending him down to the former official trail near the seafront but the signs were directing him in the other direction.  We set him straight, towards the marble mountains and the vineyards. 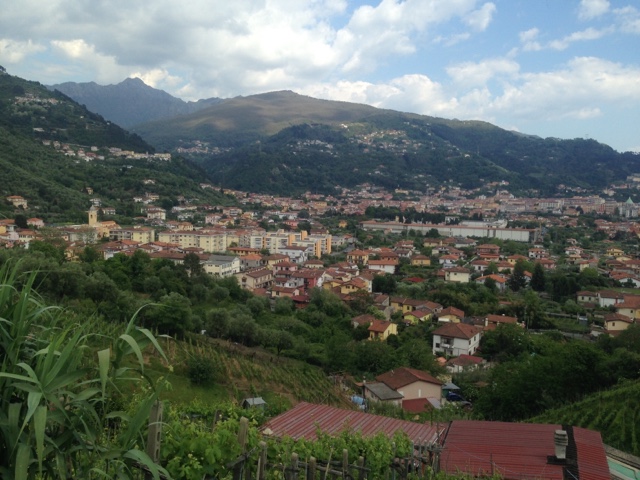 The marble mountain near Avenza was a backdrop for much of today’s walk.  Italians have been quarrying marble there for more than a millennium and it is said that the marble that Michelangelo used to create his famous statue of David was from there.  In fact, Melanie told me, you can still see the outline of David’s features in the spot on the mountain.  Funny that. 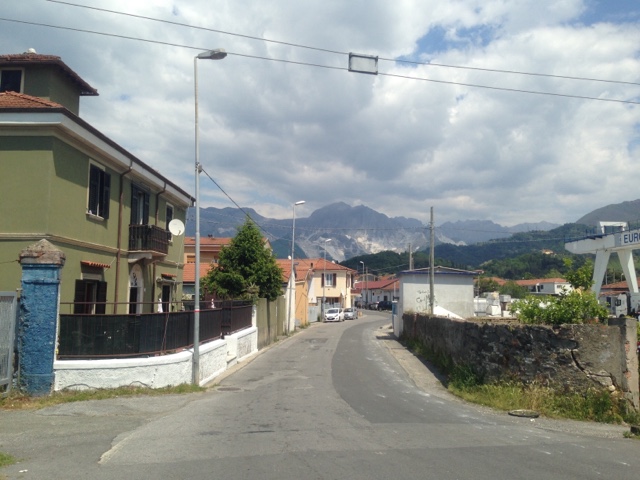 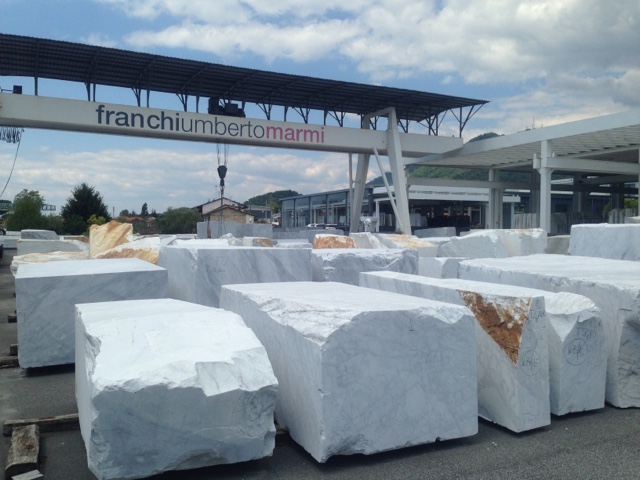 After passing through the marble warehouses, we started the expected climb up to the vineyards.  It was quite steep and hilly on top too but not too bad.  The views toward the marble mountains and the valley all the way to the Mediterranean were stunning and the reward for the climb.  It was slow going though and with the Long mileage, meant we only got to the edge of the center of Massa around 4:30pm. We helped Anders find a room for the night and sent him off with a few phrases in Italian to get him through until morning. 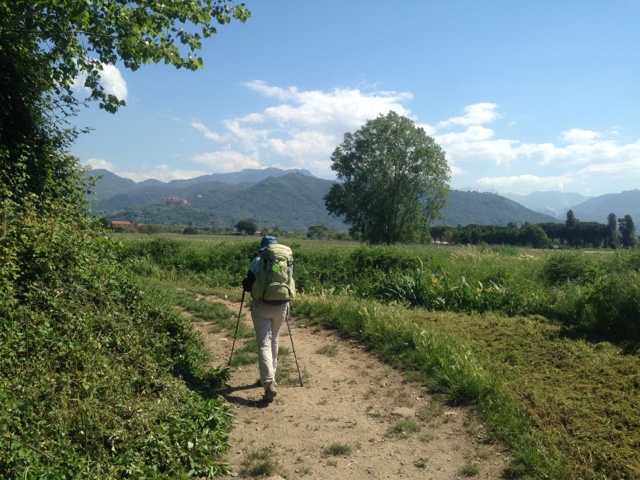 That is when Melanie and I had our decision to make.  We still didn’t know just how high we would be climbing but our GPS app said that we were 3.6km from the hotel and it gave us the quickest route.  We should be able to walk that in an hour we thought so we headed off. Upwards.  Upwards at a very steep grade.  Upwards every single step of the 3.6km.  The early road portion of this was steep enough for me to wonder how cars climbed them.  Then we hit the old, rock walking paths that I am pretty sure were at a 45 degree angle. After trudging up all that, we still had 2km to go on proper roads. That seemed closer to a normally manageable 10 degree slope. Normal, that is if you were not half dead from the billygoat trails we had done so far. 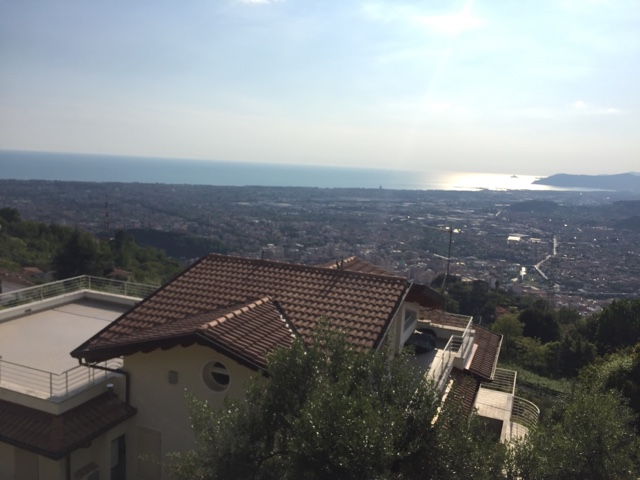 By the time we reached the hotel at 6:15pm, we were exhausted.  If any of the few cars that passed us had stopped to offer us a lift, we would have taken it.  In fact, we put on our saddest faces when cars went by, hoping that the drivers would take pity on us. We made it though, in plenty of time to clean up, clean our clothes and get out and sit on the patio to see the sun setting over the Mediterranean. It was worth it. By the way, we figured that it was at least a 400m to 500m climb in that last 3.6km.  We judged that by looking down to the “mountain” that we were on earlier in the day that was at 200m. 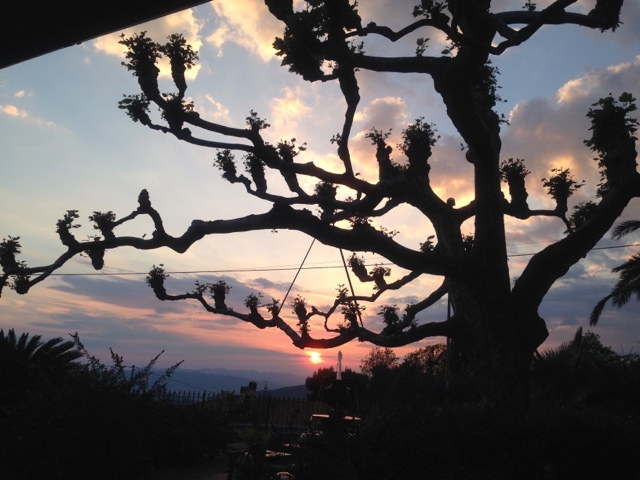 Legs are burning but life is good.  Peace y’all