Some days, you just have to put your head down and keep going. Some days, the scenery is boring, the kilometres longer, the people we meet less interesting, and the sun is just more energy sapping than usual.  Some days test your commitment to the journey.  Today was one of those days.

We knew last night our start today would not be so early.  Breakfast was promised as a nice one but only starting at 7:30am. With wi-fi available in the dining room, we knew we would be slow eating too. We finally set off at 8:30am but we had 3.6km of roads and trails ahead of us to get back to Massa before starting where our friends were. Unfortunately, because of a wrong turn and some worry about walking down the steepest of trails, we ended up walking about 5km rather than 3.6km.  With stops to figure out where we were, where we should go and to take pictures, as well as dealing with the extra mileage, it took us nearly as long to walk down today as it did to walk up yesterday.

Once back to the edge of Massa, we followed the route along the boring main road south.  We were happy to get off of it even though it meant we were heading to today’s climb. Just off the main road, we headed east a bit through a nice small suburban village.  That is where all of today’s “highlights” happened.  First, we stopped in a pharmacy to get more Berocca (fizzy multivitamins we take to help us ward off problems while we walk).  There was a long queue at the counter but we went looking for the vitamins.  We found the Italian equivalents and got in line.  For some reason, an older Italian woman at the back of the queue insisted that we go in front of her.  We were not allowed to refuse.  Was she just being nice to foreigners or pilgrims? As we got closer to the front, realized why.  She had arrived just after us but noticed that we did not take a queue number which was apparently required.  She was being fair and polite. 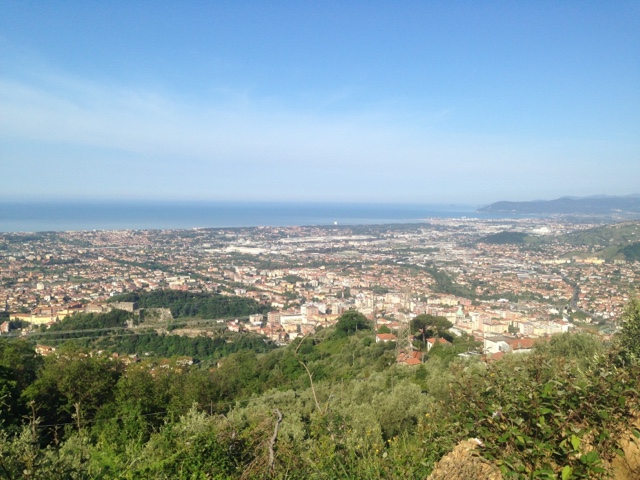 Keep an eye on the building in the green area on the lower left side. 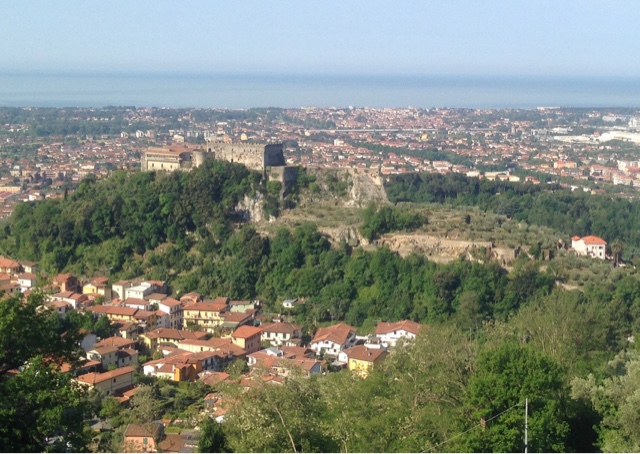 Lower down, we are closer to the castle “on the hill”. It looked like a dot to us last night.

Just across the street and further up the road, we stopped for a sandwich, drink and toilet break.  Our friend from the pharmacy walked by and wished us well.  After that stop, we continued on another 100m or so and, stopping outside a fruit store, our friend came up to us once more.  This time she was more talkative (but still speaking only Italian).  She asked us if we were walking the Via Francigena and where we were going today and our final destination.  Then, in the conspiratorial tone of a schoolgirl plotting with her friends to play a prank on their teacher, she explained that we were just about to have a steep 170m ascent and descent over a hill.  She laughed as she told us that she knew a shortcut down the main road that could save us the climb as well as several kilometres. Bless her little cheating heart.

That sandwich we had was on some random but delicious bread with thick, hard but chewy crust.  When you ask for a panino here, you never know what kind of bread it will be on but it usually is good.  Also, you know that the filling will be prosciutto (ham), either “cotto” (cooked ham like what we think of as sandwich ham) or “crudo” (the dry-cured aged ham).  When you order the sandwich, the barman will take the whole leg of the pig off the hook and finely slice it right in front of you.  One man was so proud that the leg he sliced from for us was tagged with the date of April 2014.  I think he was proud at how long it was aged but, to me, I just see it as a result of the fact that the huge leg can last so long when you get only one tiny slice on each sandwich.  Sandwiches here are bread with ham flavoring! 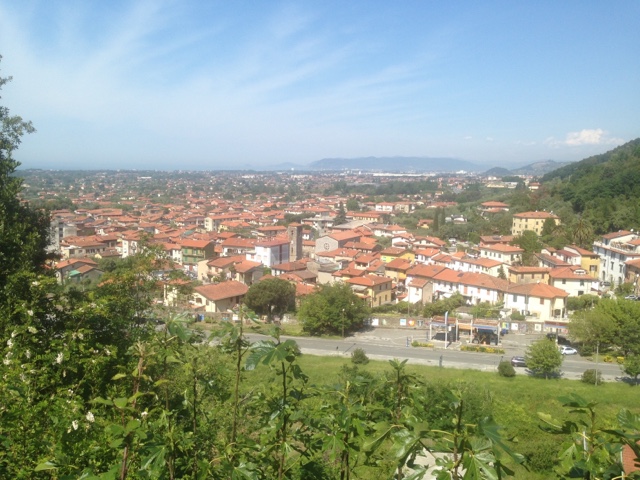 The walk over the hill was only fun because we got to see lots of bikers racing up and down the road.  Fun, huh?  After that, it was a long and boring walk through the suburbs and industrial area of Pietrasanta.  Whoever laid out the route tried desperately to keep us off the main road from Massa either because it was dangerous or because the cafe owners on it did not pay any bribes. I am not sure which.  I can tell you though, if I have to walk past one more storage yard full of marble blocks, slabs and plates, I will lose MY marbles!

We’re are staying tonight in the wonderful ostello at Casa Diocesana La Rocca.  It has eight sets of bunk beds in a clean room with great views over the town.  The showers, toilets and clothes drying area are perfect for its size yet there are only four of us here tonight including Anders.  He was here when we arrived and told us that Monique has foot problems.  She saw a doctor and was told she had to rest it.  She had to take a train to Lucca where we might bump into her tomorrow.  (edited to add that 10 very, very loud Italians just showed up.  There goes the neighborhood)

By the way, the nun who let us in and showed us around the ostello is from Flores, Indonesia.  You should have seen her eyes when Melanie started speaking Indonesian with her.  I made the mistake of saying in Bahasa that I also spoke Indonesian so she started asking me questions in the language.  Wadoh!  All that could come out of my mouth was Italian. Languages just don’t mix well in my head. 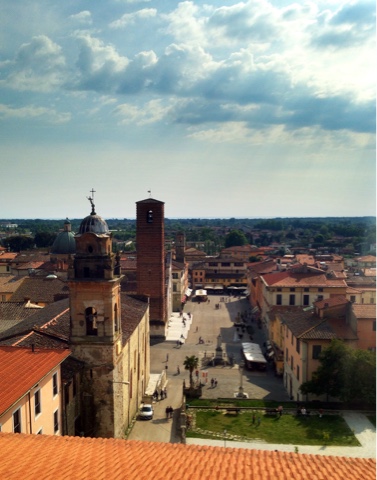 The view from the ostello.  Three bell towers in a row. 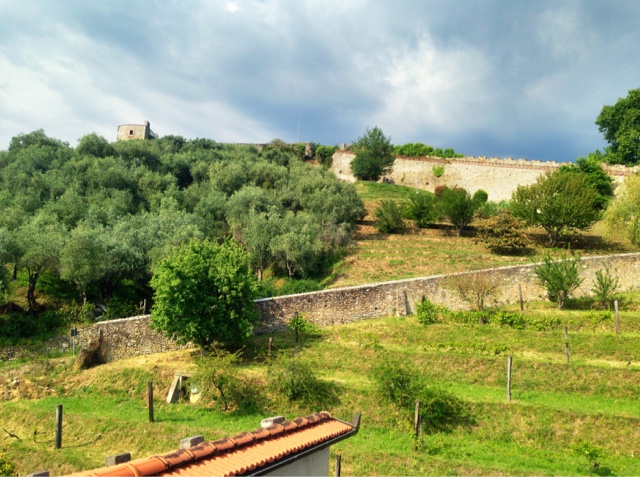 The castle walls above the ostello.

We are off now to find a bar for a drink before dinner.  We have a long walk to Lucca tomorrow but we will likely take off a day there and either just wander the city or take a bus over to Pisa.  Then again, Pisa is only 21km away.  Maybe we will walk.

Peace y’all.  Pray for Hillary.  Pray that she will have Bernie’s passion, compassion and empathy, the wisdom and fiscal astuteness of her husband as well as none of anything that Donald has. (edited in March, 2019 – you all didn’t pray near enough)