It was an easy day for the walk today in terms of the distance as well as how flat the land was. Every day there is some challenge though and today’s was the heat as well as the terrain. Except for the last two kilometres, the whole route was on streets through cities, towns, suburbs and a little bit of rural roads. In the last two kilometres, we at least had some dirt tracks through a bit of wooded area. The shade was greatly welcomed.

As is often the case, when we stay in a hotel that has wi-fi and serves breakfast, we tend to start late. We didn’t get out the door until 8:45am and on a sunny day like today, we have to pay the price of that delay. Outside the door, we were happy to see clear skies but as soon as we got out of the narrow lanes of the walled city, the sun hit us with full force. It’s always one thing or another that gets to us. 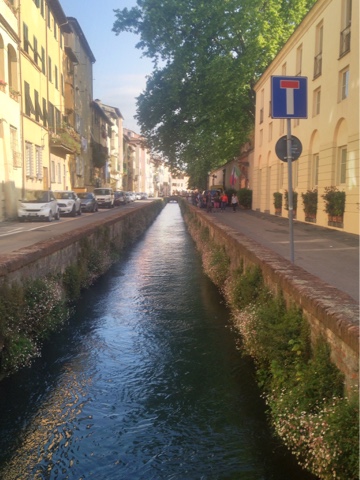 The canal inside Lucca that used to provide sanitation as well as a moat of sorts to the inner wall of defense.

Talking about acceptance, Melanie and I both had to stifle some laughter at breakfast this morning. The couple sitting next to us appeared to be perfectly nice people from England. At one point though, the wife quietly said to her husband, in the most proper tones of the Queen’s English “Harold, I do not think I shall ever get used to eating cake for breakfast”. It’s only funny when repeated in in the upper class dialect of the prawn-sandwich-eating Downton-Abbey-owning dialect of the uber-aristocratic but we giggled for hours, repeating that line as we walked.

We stopped for lunch in a large cafe / pizzeria in Porcari. It was probably the biggest lunch we have eaten in Italy but my sandwich was very good. As we sat there though, we saw the backs of two pilgrims who had just walked past. They appeared to be young ladies and, as usual, we quickly classified them into further little compartments. Even though I saw only their backs and backpacks, I was sure they were fit, attractive and German. You can just tell by the way they walked and how they were kitted out. Melanie and I agreed that it was a shame that our Danish friend, Anders, was a day ahead of us. We would have set him up with one of the two in a heartbeat. 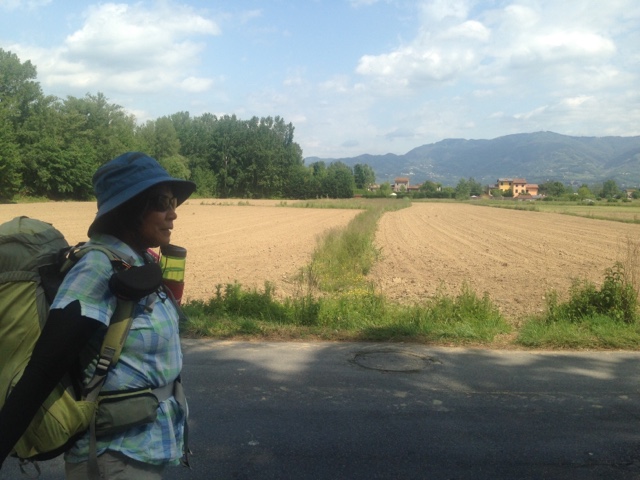 A rare profile of Melanie and the Apennine Mountains in the background.

Restarting our walk after lunch, with only about 5km to Altopascio to go, we paused to cross a major road. Much to our surprise, Anders walked up from behind! It was great to see him. We met him on only the second day of his walk so we sort of took him under our wing. He reminds me a lot of my nephew, Shane, both in looks and mannerisms. The last time we saw him, we were walking the long distance into Lucca, and Melanie and I had stopped for lunch. Anders decided to keep walking but, we found out today, that he was not feeling great so when he saw a ostello in Valpromaro, soon after leaving us, he decided to stop there for the night. Yesterday, he walked a leisurely three hours into Lucca then just enjoyed the rest of the day there.

By the way, I did run into the two young cute German ladies later today, just before we went into the hotel. They are actually Italian. And a bit older than Anders. And older than me too. Not really that cute either. They at least still looked fit though. 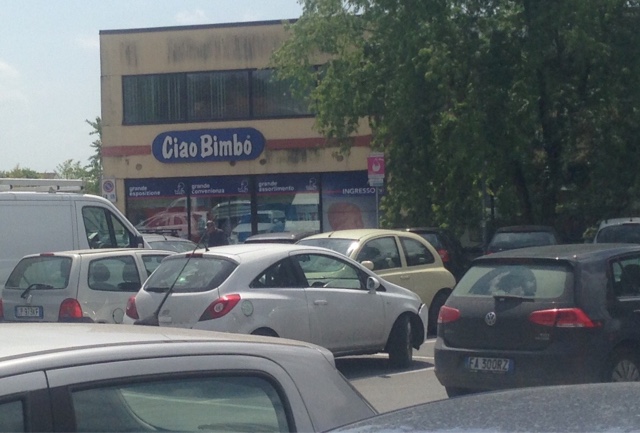 I’m not sure what this company does but I bet it was likely begun just after the owner went through a difficult divorce.

We stopped today just short of the main piazza at the Hotel Paola. Anders is in the next room. The hotel is right on the route and they have a sign outside advertising great prices for pilgrims. We are now in one of the best rooms that we have stayed in Italy and it is only 45€ for the double. In the ostello, with shared sleeping accommodations, shared bathrooms down the hall, snoring at night, loud early risers, etc., we would have paid at least 20€.

All is well (as long as ManU beat West Ham tonight).