Expecting a long day of walking, we made sure we were up early today and out the door by 7:30am. We wanted to make sure we didn’t have to walk so much in the heat of the day.  It turned out that we didn’t need to worry. As soon as we stepped outside, we were greeted with perfect walking weather. It was cool and overcast. Too overcast, it turned out later but the start was wonderful. The first 5km was a quick one hour walk along the main road southeast. It is called the Via Romana so you know you are going in the right direction. The road had sidewalks or a broad shoulder so it was not a worry.  There were a lot of commuters though and they rarely wave back.

Going into the village of Galleno was a beautiful and historic 1.5km walk along a 1,000 year old road.  Usually, the main Roman roads or roads from the Middle Ages continued to grow, widen, get paved over, etc. until they are unrecognizable in all but the name. This short stretch of road was saved from that fate for some reason so we ended up walking on the cobblestones that at least one French king in the 12th century mentioned in his blog. The road went along side of the outer walls of a castle that is either no longer in existence or well hidden. 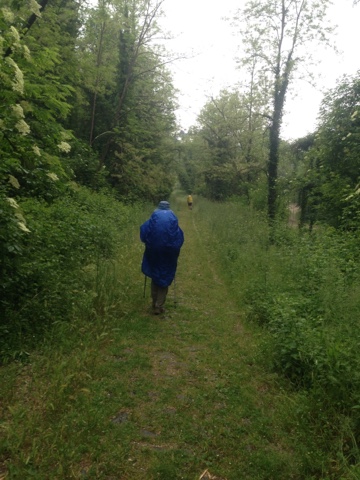 While walking on that trail, we met an Italian pilgrim as we put on some rain gear. It had started to drizzle lightly so we just used the backpack covers and we got the raincoats ready.  On the same trail, we spotted a small, folded yellow umbrella that looked like the ones we saw the street sellers hawking in Lucca.  It seemed dry and must have recently been dropped.  I picked it up in the belief that it was a fellow pilgrim’s, and I put it in my backpack pocket. Sure enough, later we saw the two Italian / German, young / old, cute / not so cute ladies from yesterday walking backwards on the trail.  Is this your umbrella?  Happy smiles all around although I did detect for a second that one of the ladies looked at me a little suspiciously. No, I wasn’t expecting to keep it he umbrella.  It’s not exactly payback to the farmer who rescued my walking stick, but it’s a start. 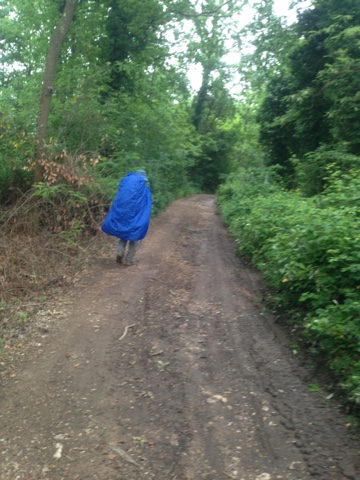 After breakfast #2 (or was it #3?) in Galleno, once out of the village, we had about 6km of fantastic dirt trails with small hills, just enough to make it enjoyable, even in the drizzle.  When we got to the village of Ponte a Cappiano, we crossed a bridge built by the Medicis which was cool but then followed a new track to bypass the industrial area of Fucecchio.  This trail was perfect for today, about 3km along a canal and through fields.  It was on freshly cut high grass but I bet it would be murder on a sunny day. There was not a single lick of shade during that whole section. 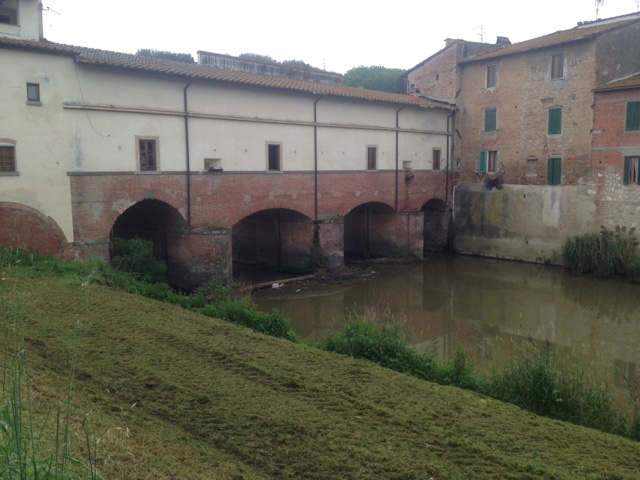 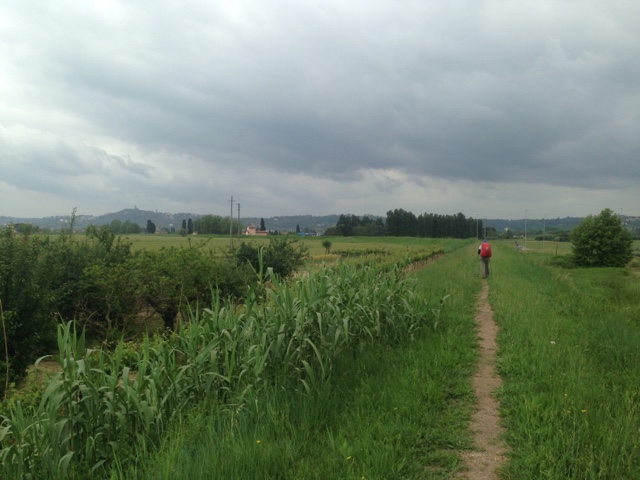 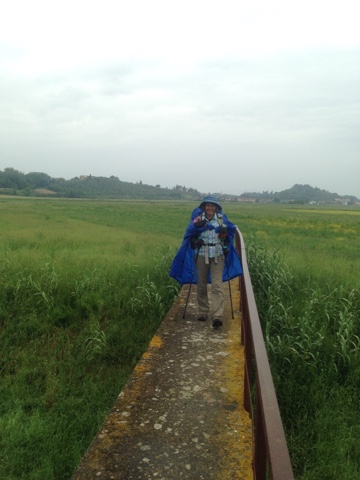 Just before climbing the steps into the old centre of Fucecchio, a car stopped next to us.  The young driver called out to us, asking if we were pilgrims going to Rome.  “Yes, we hope to make it there”, we replied.  He just reached his hand across to shake ours through the window. He offered us a Buen Camino and then drove away, much to the delight of all the cars now backed up behind him.  After walking through the centre of Fucecchio and getting some lunch, we crossed the Arno River – much further upstream from when we crossed it in Pisa two days ago.  After that, we had some strange 1km detour through some fields which appeared only to be there so we could avoid a 100m dangerous section of the main road. 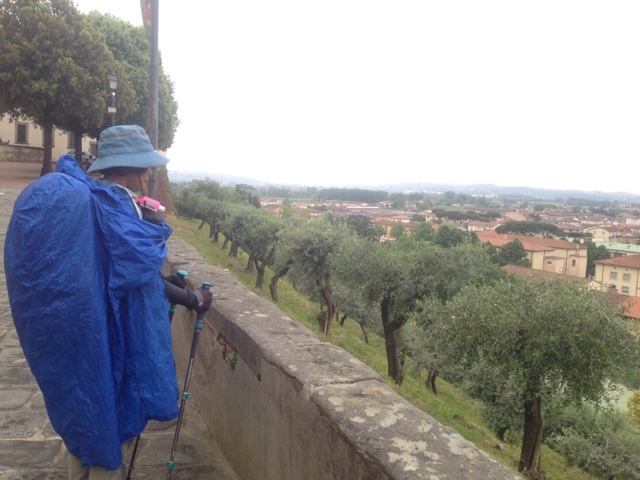 It was at this point that I jokingly said to Melanie, “See that tower on the big hill way over there? That’s where we are going.”  I guess I should not have said it jokingly.  As that hill for closer and closer (and appearing higher and higher), I was becoming more and more aware that this was actually our destination. To be accurate though, our ostello for the night is in the building next to the tower.  I was close though. 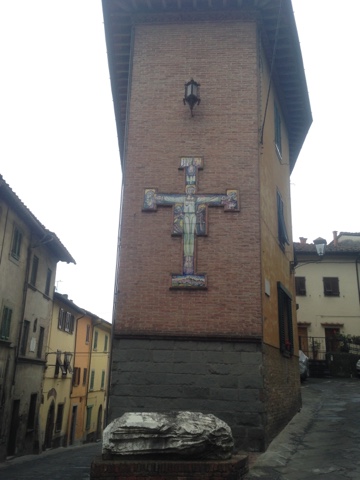 The last two kilometres were fairly steep and finally got us really sweaty for the day.  The ostello is the San Francisco convent, run by a now small group of Franciscans in their monastery. The place is old as the hills but has modern cells for weary pilgrims.  It’s 35€ per person for dinner, the bed and breakfast and it’s a good deal.  Dinner tonight was simple but enjoyable.  There are about 16 other pilgrims here, mostly bikers from Verona, but everyone other than us is Italian.  Bikers certainly eat with a hearty appetite as well as a lack of awareness of what is happening around them.  It was nice chatting with everyone at dinner though because the conversation was mainly in Italian.  It was good practice.  Mass was at 7:00pm, dinner at 8:00pm and breakfast at 6:30am.  Yes, 6:30AM! 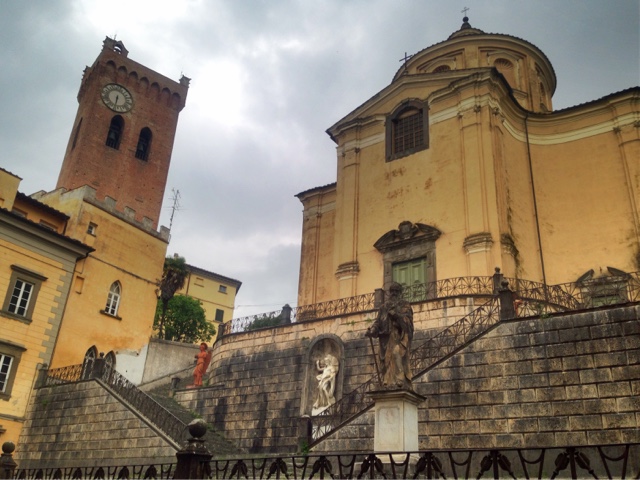 I have to hurry to get some sleep. Peace y’all. 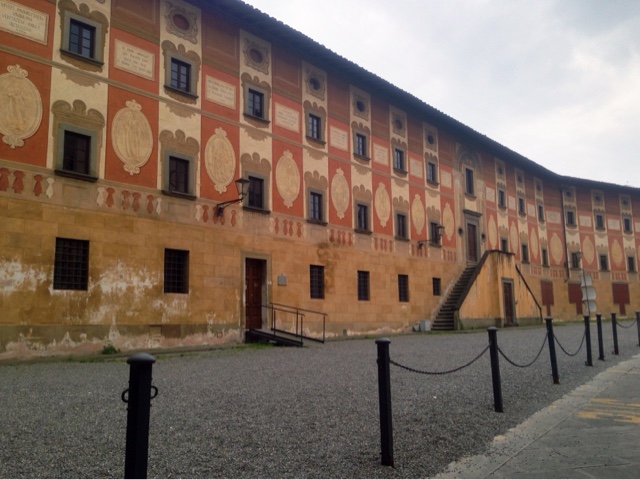