There were lots more of those “rolling hills of Tuscany” on today’s short section.  We definitely could have walked further and possibly could have found someplace to stay but I think the idea of this short section is to get us ready for some long days ahead.  I also think that because Gambassi and San Gimignano are such gorgeous places, you really need a day to spend in each town.  I don’t think they can move the towns further apart to, say, a decent day’s pilgrim distance of 25km.  There would be logistical problems because of the large hills they are built on. 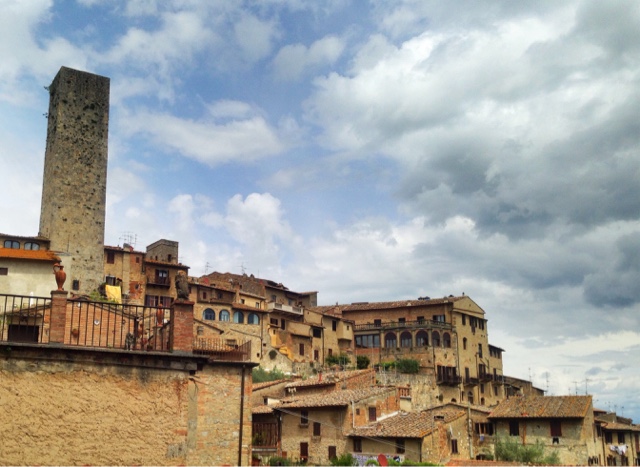 The view from our balcony out back. This is what I was looking at as I hung up the laundry!

We were not quite ready for San Gimignano.  As noted, we would have been happy to walk further in these hills but we reached here at noon. But we were also not ready for the tourists onslaught.  This place is a tourist mecca.  As we walked up the beautiful ancient road, up towards the top of the hill where the duomo is, we were overwhelmed by all the people, gifts shops, bars, restaurants, tourist museums, noise, photo snapping, selfie sticks, foreign languages, etc.  I am now scared to death of reaching Rome.  We shall see. 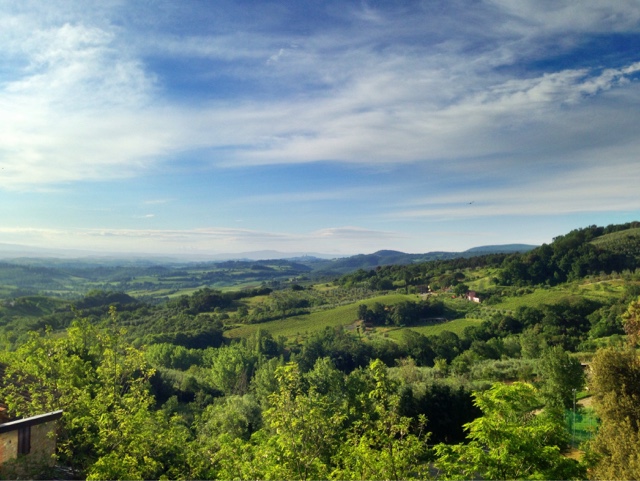 Old buildings were the story of the day.  Other than the hundreds of them in Gambassi, as well as dozens of old farm houses and vineyard estates that we passed, the first of note was the Sanctuary di Maria Santissima Madre della Divina Provvidenza, in the little hamlet of Pancole, where we met an old monk who was taking out the garbage.  You just have to talk to someone who takes out their own garbage.  It turns out that he was stationed in Toronto for several years so his English was perfect.  He asks about us, where we were from and what we were doing.  We asked him where he was from and he replied with a shrug of the shoulders that belied both resignation and worry “I am Italian but my grandfathers came here from Germany.”  That last part was spoken almost as if by apology although I wasn’t sure why.  He asked Melanie if she had faith and when she replied that she did, he said “Good, we need strong people”. Melanie said that we now have a good Pope who will bring back many Catholics to the Church and the monk seemed to roll his eyes a bit and said that only God knows.  I don’t think he is a big fan of the Jesuit, Francis.  We bade him well and walked on, following the road under the sanctuary and just beyond. It was there that we saw the sign saying that the sanctuary was built in the 1600’s but was destroyed by Germans in 1944 then later rebuilt. Wait a second…. exactly when did the monk say his grandfathers “came over” to Italy? 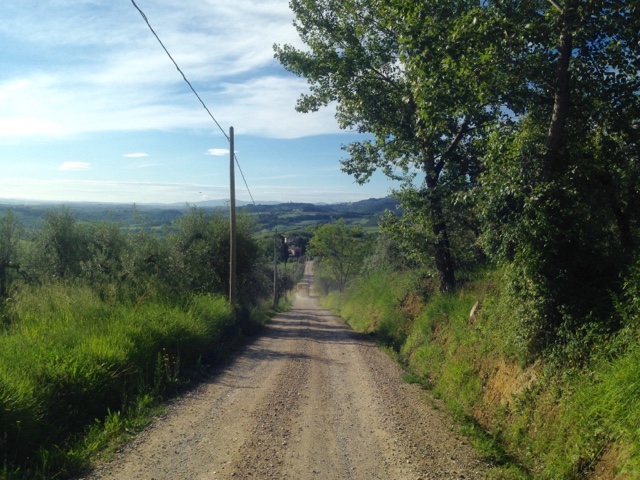 The next old building with a story was the Castello di Collemuccioli.  It was on a strange part of the route today.  We could clearly see San Gimignano on the hill beyond the valley to our left but the signs directed us to climb even higher on a trail to our right.  Were the organizers just making us walk a little further or higher because of the short day?  No, it turned out that this loop led to both the Castello and some great views of San Gimignano. The castle was mentioned in books as far back as 1059 and belonged to the Bishop of Volterra.  It was actually destroyed in 1230 by, get this, the Bishop of Modena who was later canonized as a saint and is now remembered by the name San Gimignano!  In summary, two bishops on opposing hills, about 4km apart were fighting each other over feudal ties and the bishop that won later got sainthood for winning, I guess.  Now you need a few miracles to your name before you even get considered for canonization. At any rate, the castle tower has been rebuilt many times since then. 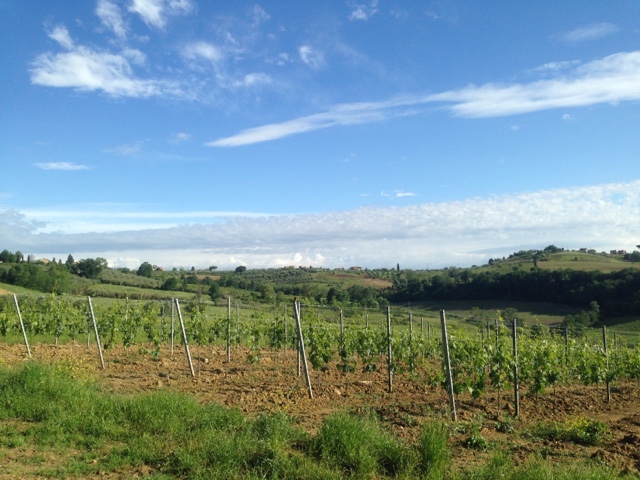 The final story from today comes from the ancient town of San Gimignano itself.  While there are hordes of tourists around every corner, some of them have cute children in tow.  We played hide and seek with one toddler in the piazza while the parents tried to read their map.  We also watched another adorable little girl, squatting down so low on her haunches in order to get close to the pigeons that were eating bread crusts in the square.  Carefully, so carefully, she moved closer and closer to the birds, slowly enough that they were not scared away.  She was like a cat sneaking up on the unwary canary.  Finally, she was within striking distance.  She quickly thrust out her arm, grabbed a piece of crust and popped it into her mouth!  Not what we were expecting. 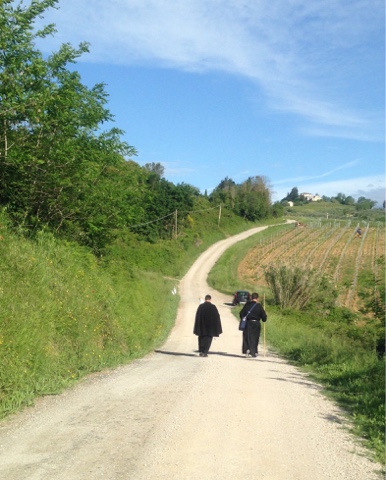 Two monks walking down the road, carrying a statue on the Virgin Mary and reciting prayers.

We are staying tonight in the Affittacamera al Melania, just 50m down the Via Francigena road past the Piazza della Cisterna.  50€ got us a nice ensuite room, hot shower, a good place to hang our laundry and a pleasant welcome from three generations.  We initially tried a cheap looking hotel on the piazza but at a pilgrim’s discounted rate of only 130€ per night, we decided to ask the tourist office (at the foot of the duomo steps) for help.  They were a fantastic help. 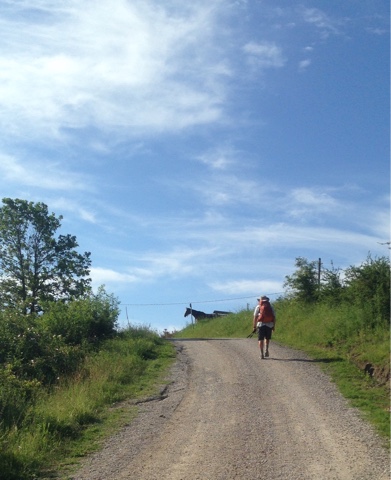 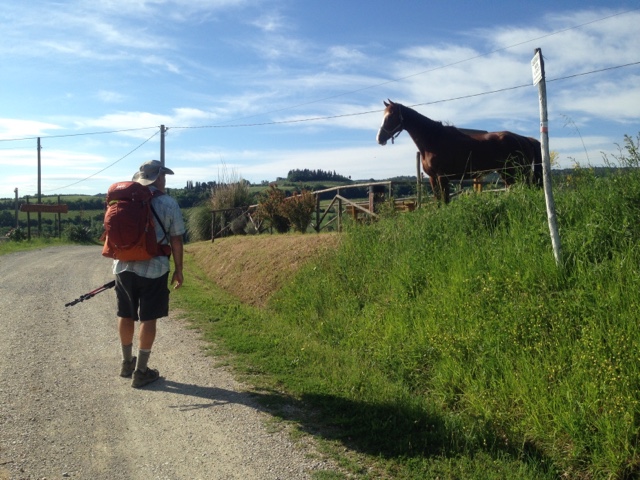 One final note, we just had a light meal for a late lunch in a simple cafe. They sure have tourist town prices here.  Walking back to find a bar with wi-fi, we were amazed to see about a hundred people queued up to buy gelato at one shop.  I hope it’s good because Melanie is intrigued.  She is hoping the tourist busses clear everyone out by sundown so that she can get some.  Fat chance of that.  By sundown, she’ll be too cold to want gelato! 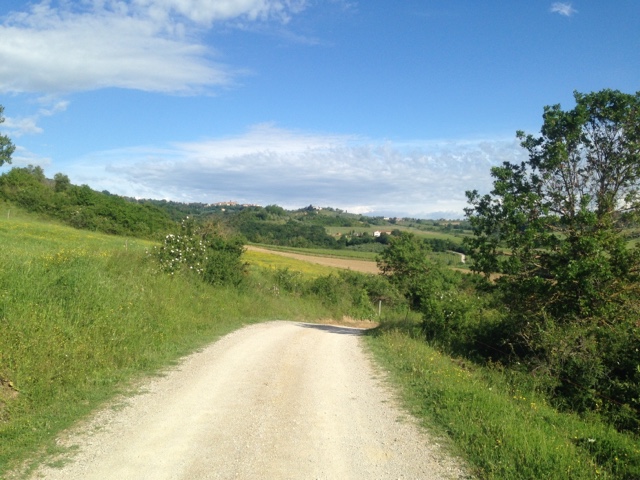 Longer days ahead but also another likely break in Siena this weekend. 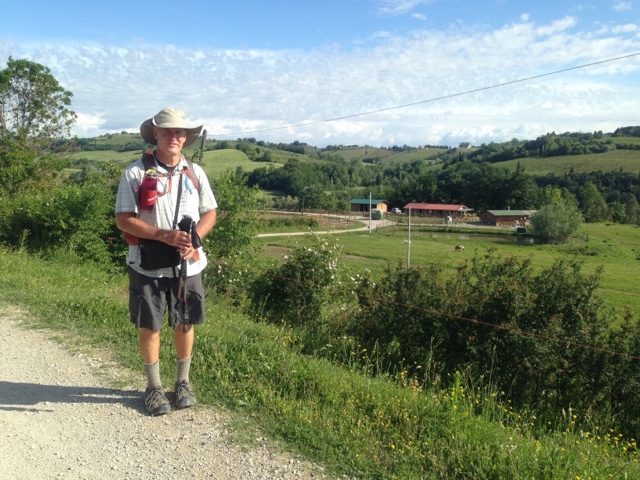 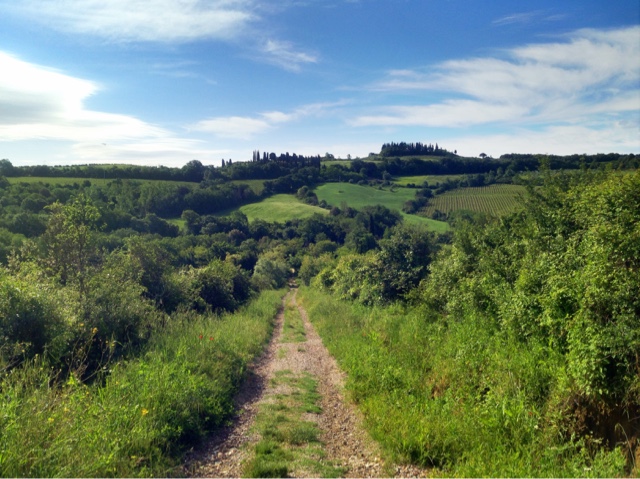 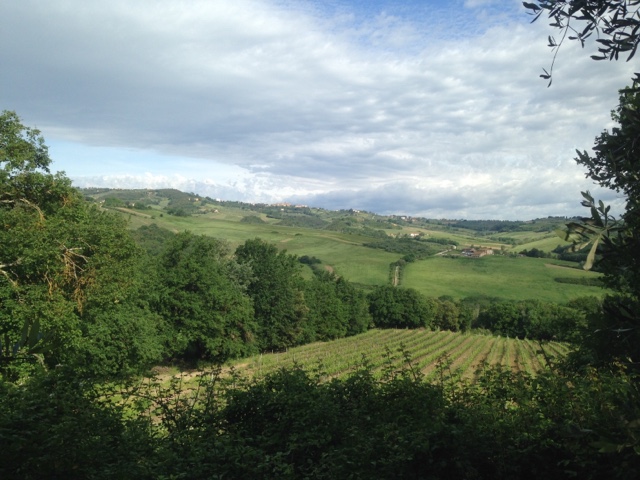 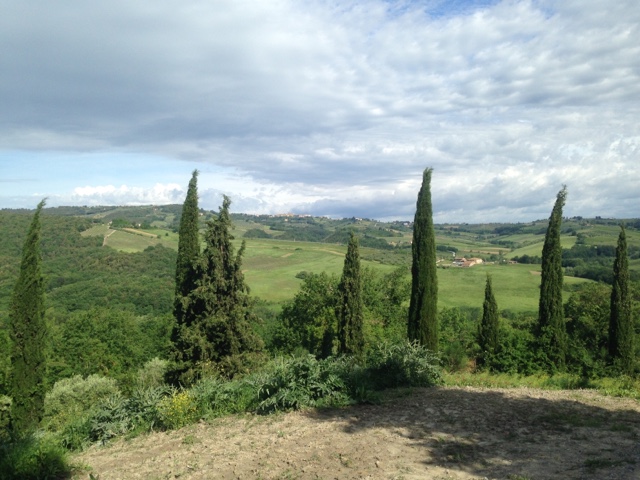 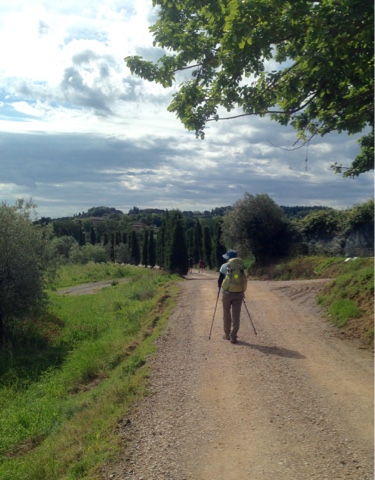 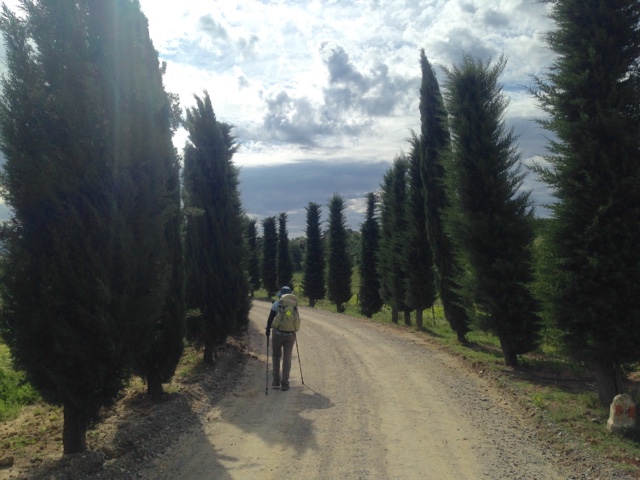 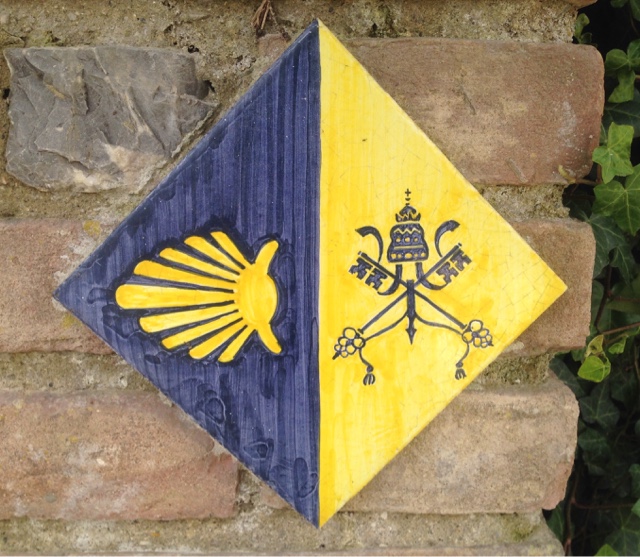 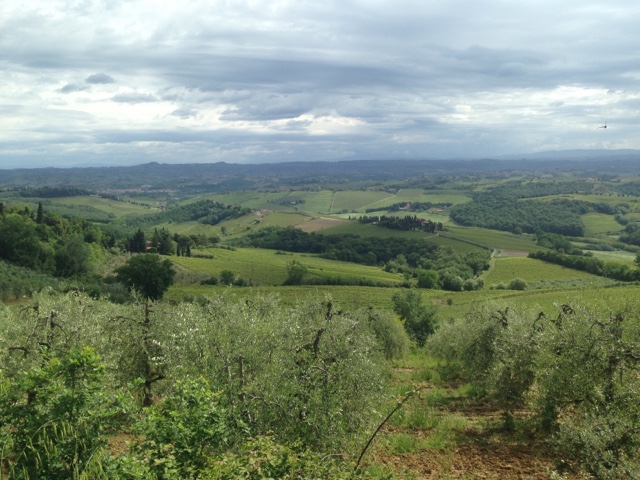 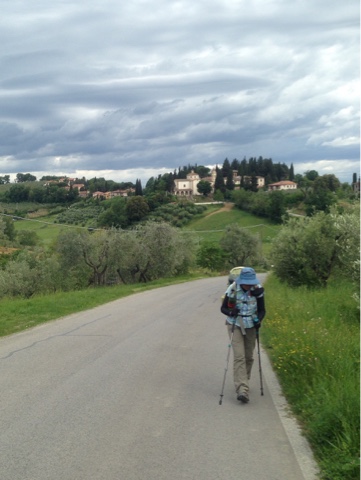 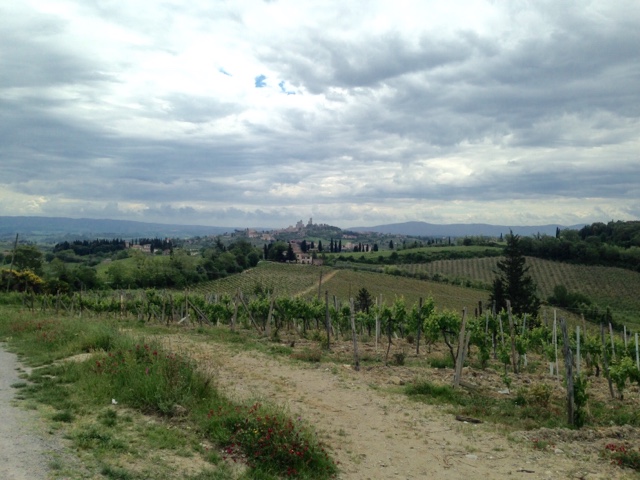 San Gimignano on the hill. 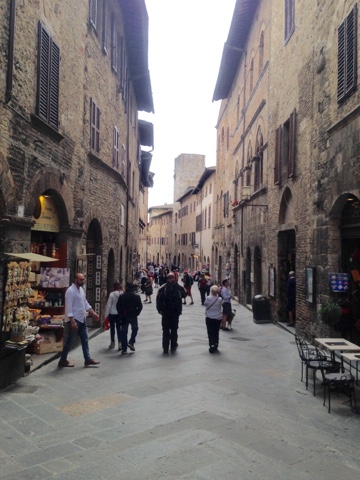 Our Affittacamera is just on the left past the tourist gift shop. 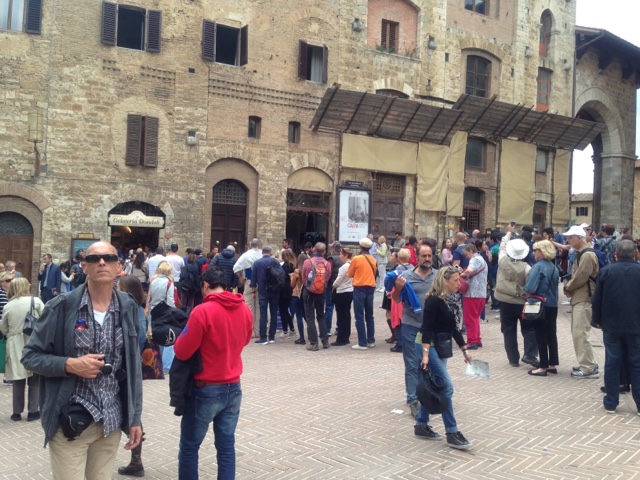 The queue for gelato!