We decided to make today a bit of an adventure.  Our guidebook described a long and strenuous 27.2km section on tarmac and tracks through those old rolling Tuscan hills with “normally” shallow water crossings and limited (which mean “no”) places to stop for a drink or something to eat.  I wondered if there was an alternative. The guidebook suggested a 19km alternative but it only went to Colle-di-Val-d’Alisa which is 9.4km away from here.  It would make tomorrow’s walk to Siena more than 33km. That wasn’t an option.  We checked the GPS and it gave us a walking route about 21km to Abbadia Isola which looked good on paper.  It was mostly on track and appeared to go through a few towns including the large Colle-di-Val-d’Alisa.  Let’s do it! 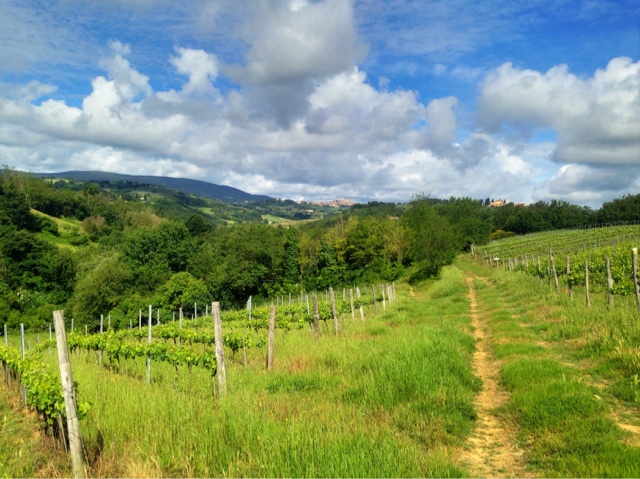 Looking back at San Gimignano about 8km away.

I am not sure how it compared to the current official route but we found out something interesting as we walked the GPS route – for much of today’s walk, we were following old Via Francigena signs.  We were on the old official route.  Again, I am not sure how it compares but our walk was wonderful and about 5km shorter than the current route.  I figure I get a gold star on my life’s report card for walking to Rome.  I won’t get any extra credit for walking exactly the route that someone thinks is currently most scenic. 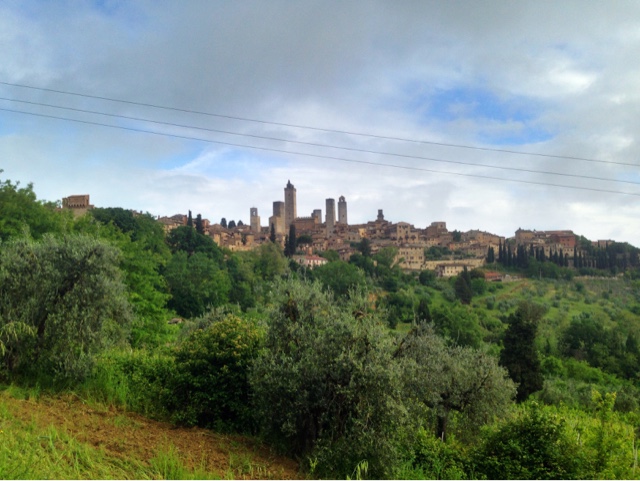 Our route left San Gimignano the same way as the official route but only a bit outside of the city gates before heading southeast rather than south.  We passed Ponte a Nappo on a track before crossing a river while on a brief 200m section of tarmac on Strada San Gimignano. We then had a steep climb up to the hilltop vineyard Pietrafitta which provided stunning views back to San Gimignano. We then headed towards the hamlet of Bibbiano and then the peak at Poggio ai Borboni before dropping down to the town of Colle-di-Val-d’Alisa.  I should stress that we had a great walk into the lower new section of the town along the former rail line.  We did not climb the hill to the old town that looked just like Sam Gimignano from below.  From that town, we had a short boring stretch through the residential area but we were soon enough on farm tracks and climbing more of those hills. Some of the nicest parts were on very forested trails but never far from civilization. 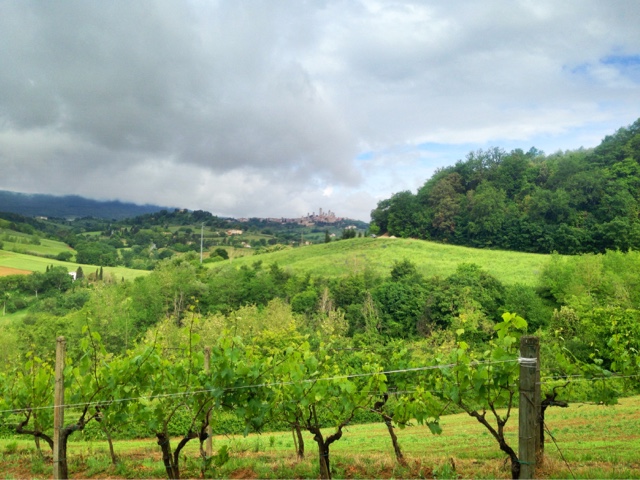 For those following us, again, I don’t know how it compares to the current official route but we thought the one we did was great.  The only big challenge was when we first realized that we were on an old marked VF route just after crossing Strada San Gimignano about 4.5km from the town.  After leaving the side road, we had a 150m of balancing on the edge of the trail which was now a muddy stream because of recent rains.  Then we had about 600m through a very narrow trail that was overgrown.  The trees and bushes on both sides were wet and rained down on us as we walked.  Finally we came out to a vineyard and again had magnificent views back to San Gimignano. 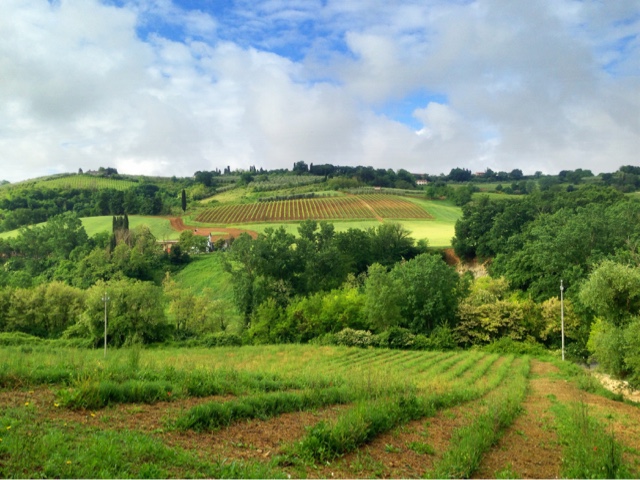 We are staying tonight in the fantastic (I think) Ospitale dei Santi Cirino e Giacomo.  It’s a 10 bed ostello run by local volunteers and they desperately need a bigger place.  We are sitting in the bar across the street and watching as at least 25 pilgrims have been turned away.  These people have another 4km to the next town and they came in between 5:00 and 6:00pm.  I think someone is driving over the latest batch.  (Edited to add that I just walked around back and there are 50 beds for “overflow” pilgrims in a restored convent.  Some people are staying there but many walked on.  I am not sure why).  Dinner was a simple meal of pasta and potato salad.  It was enjoyable but I have already called Dominoes. 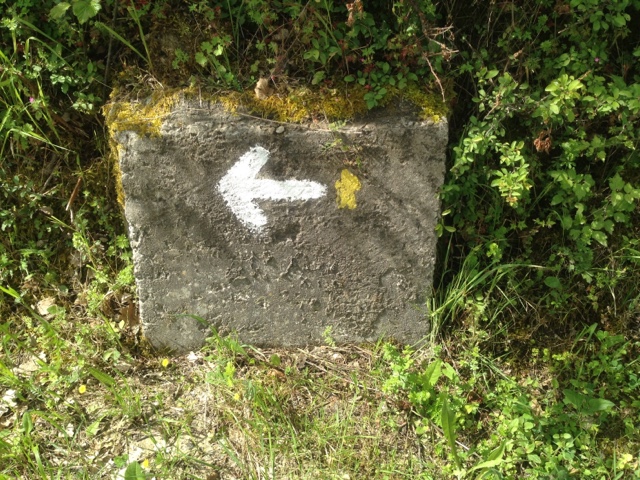 There is lots of Camino de Santiago memorabilia in the ostello and they also ask us to leave our boots outside in back of the buildings – very Camino-like.  They provide dinner and breakfast and they also have the tradition of washing the feet of pilgrims at 7:30pm.  I’m not quite sure how I will deal with that.  We happened to be the first pilgrims in the door and within 15 minutes, I was already giving up my bottom bunk to an old man (probably younger that me) who has a bad back and can’t climb. 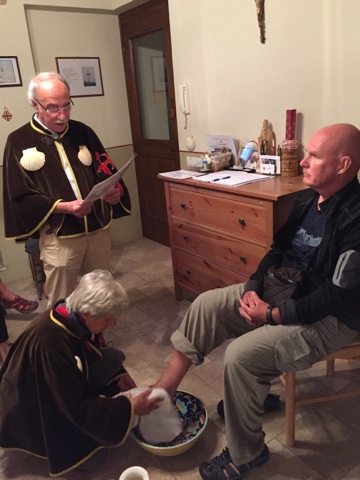 Regarding the people we met today, only a few stick out as memorable.  First was the woman running the bar in Colle-di-Val-d’Alisa.  We had purposely avoided the first few bars into town as well as ones around the main piazza.  We spotted a church down a side lane and headed for that.  As always, there is a nearby bar (the men have to hang out someplace while the woman pray for their souls).  There were men outside playing backgammon and dominos at all the tables.  Inside were two small tables and a bar, too small for its purpose.  We found the cooler with the lemon sodas but our request if they had panini was met with shrugs and pointing to prepackaged sandwiches that would not be out of place in a 7-11 or Singapore petrol station.  We’ll have to eat someplace else, I guess.  Then there is a long discussion between the barmaid and her friend and the barmaid asked us if we wanted prosciutto panini.  Of course we do!  She then ran to her own kitchen and made us sandwiches that were delicious.  It might have been her husband’s dinner but we were hungry. When she found out Melanie’s origins, she told us that she was actually from Albania.  After that, she was our friend. 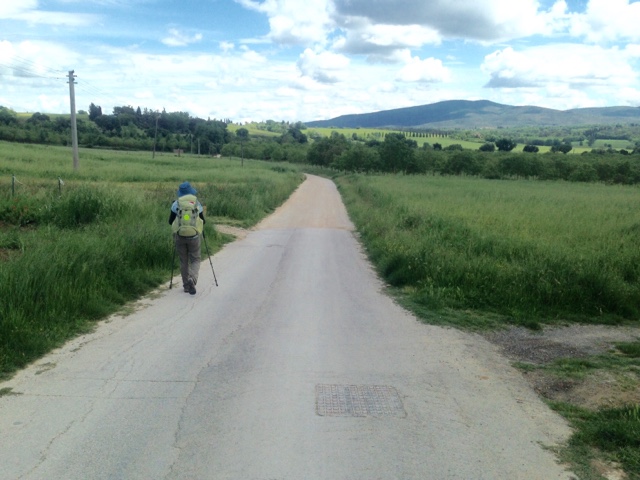 We also experienced two tour groups.  The first was while we were having a quick coffee / juice in the cafe across the medieval lane from last night’s lodging in San Gimignano.  We heard a ruckus outside, growing louder and louder.  It sounded like the circus was arriving in town. We, and the other customers inside, watched as a tour group of about 30 Chinese marched passed up the hill towards the main piazza.  One comic in front was walking like he had broomsticks in his pant legs.  Everyone else was laughing hysterically and following along behind.  I reckon that they were in a rush to get first in queue for the gelato. (Note: on the way home from dinner last night, we actually did stop at the famous gelateria.  Despite the cold wet weather, we both had an ice cream.  It’s confirmed – it is the best in the world.) 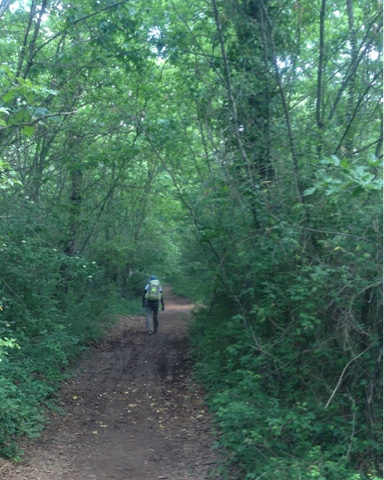 The second tour group was at the bottom of the hill that San Gimignano is on.  We were descending the hill and, again, we heard a ruckus about a hundred metres in front of us.  A hiker rounded the corner of a side lane and came toward us.  Then two more emerged, then five more, then they just kept coming.  There must have been 50 of them, some with full backpacks, some with small day packs, so with only handbags and one lady actually walking a small dog.  All age groups above 25 years old were well represented.  Some people had walking sticks, some had pilgrim staffs but most walked unaided.  Footwear ranged from leather trekking boots to sneakers to fashionable low heels.  One thing was common though, everything was as clean as if they just got out of the hotel bus around the corner – which was our guess as to what they were up to. They were proudly walking the whole 2km into town. I give them credit though as it was all steeply uphill. Monteriggioni in the distance.  We stopped 4km before this UNESCO World Heritage  site.

One last comment about people: in the dining room of the ostello, we recognized a photo taped to the cabinet.  It was the official work ID photo for the famous ex-Swiss Guard that we met a few weeks ago who was walking from Vatican City to his home in Switzerland after his tour of duty was finished.  It was the same photo that Monique, Gerda and Yvonne carried so close to their hearts.  He obviously stayed in the ostello so we told the hospitalera that we new him too.  Then another Italian pilgrim who is bicycling to Rome said he also met him a few days earlier.  This guy is famous! 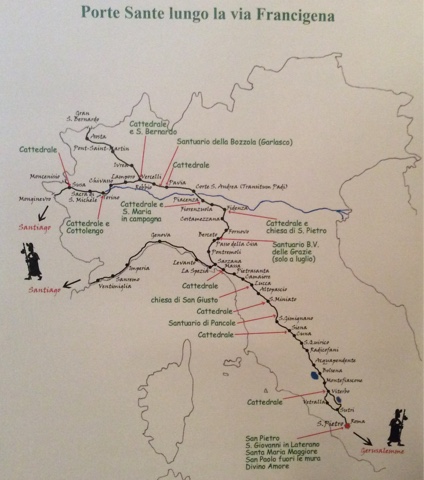 Enough for today.  The pilgrim I gave my lower bunk to is already snoring and I know there is no internet in this town for posting this message anyway.  Peace y’all.