Today’s walk had to be good because we knew we were in for a treat at the end.  Not only were we stopping in Siena, a gorgeous old city that I remember from a visit 30 years ago, but we also promised ourselves a rest day here to enjoy the town.  Rest days also mean hotel stays which also mean a good sleep, warm bed, long hot shower, usually reliable wi-fi and a full clothesline, crisscrossing the room above the bed. 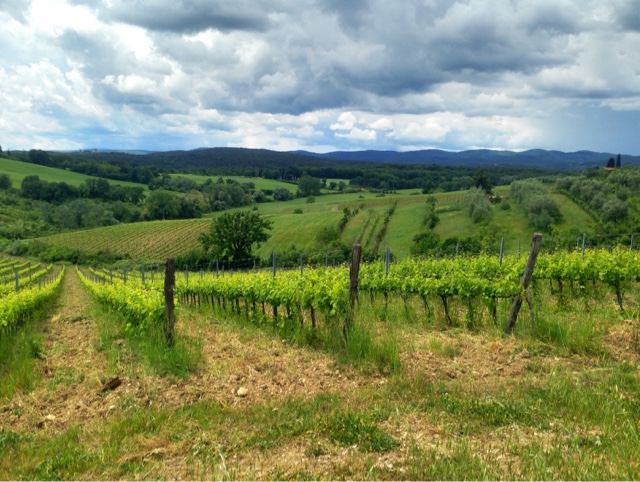 The first 4km to Monteriggioni through farmlands went by in a flash.  This medieval walled hamlet on a hill is about the size of a football pitch but is very well preserved.  Built in the early 1200’s as a fortification to protect the lands around it by the people of Siena, who were fighting the people of Florence, it was later handed over to the Medici family of Florence as a peace offering from a commander that Siena hired because he was exiled from Florence by the Medicis!  Oh the intrigue!  Oh the betrayal! Oh the long sentence! 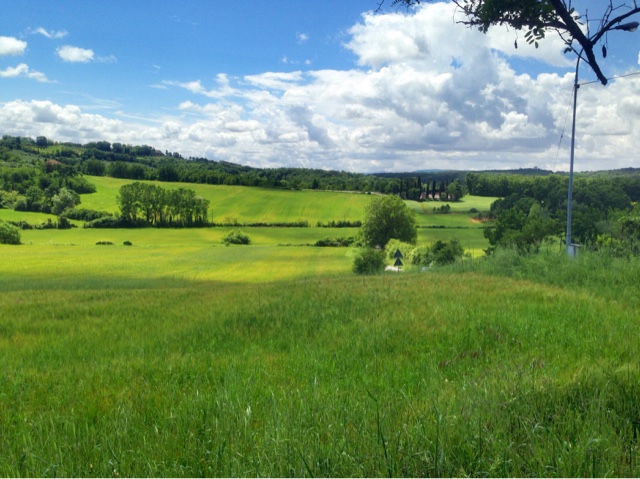 We stopped in the only cafe there for quite a while because A) it would be the only place for a pit stop before Siena; B) they had the best cream-filled croissants on earth; C) they had wi-fi which allowed us to find a hotel in Siena and relieve a lot of stress of the day, and finally; D) they had the largest jars of Nutella that I have ever seen in my life and it took us a while to figure out how to fit them into our backpacks.

The rest of the day was mostly through nice but sometimes muddy forest tracks with some farmlands added in.  We were often in those rolling hills but because of the forest, we often missed the views of the past few days.  The forest was a great respite from the sun though and it was very enjoyable.

The route was definitely a meandering detour, not direct to Siena.  At one point, we followed the official route along a road for almost 2km, passing road sign after road sign saying that Siena, for cars, was the other direction.  It can be demoralizing knowing that you have about 10km to go along the trail and you see a sign that says your destination is 7km the other way.  12 minutes later, you pass another sign that says it is now 8km away!  Soon after that though, we were directed around a hairpin turn and headed in a good way again.

After that turn onto a gravel track, we walked through an area that was supposed to be a swampy lake back in the Middle Ages.  We passed a monument that said that some guy named Leonardo paid to have the whole placed drained and turned into farmland.  Melanie and I can attest to the fact that they missed draining a few bits along the trail. 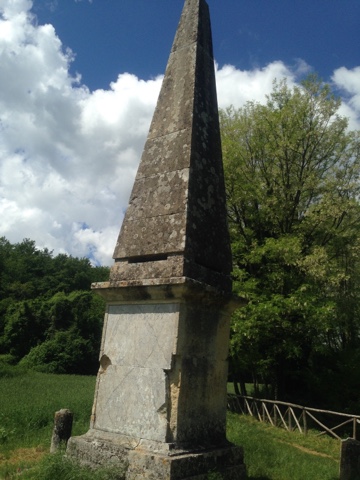 We were soon in the outskirts of Siena but had two masochistically steep hills to climb before getting close to the city.  Hungry and thirsty for something other than dried fruit and water, we were disappointed that every cafe and bar in the outskirts was closed.  Arriving someplace on a Sunday afternoon can be problematic.  Only 1km from the city centre, we finally found a pizza shop and filled up.  After that, we made our way into Il Campo.  It was fun seeing Melanie’s eyes when she entered the huge piazza from the tiny covered alleyway.  The first sight of this place really can take your breath away.  It was a beautiful sunny day with thousands of people enjoying a lazy Sunday afternoon in the Tuscan sun.  Okay, not a lazy afternoon for two of us but you get the point. 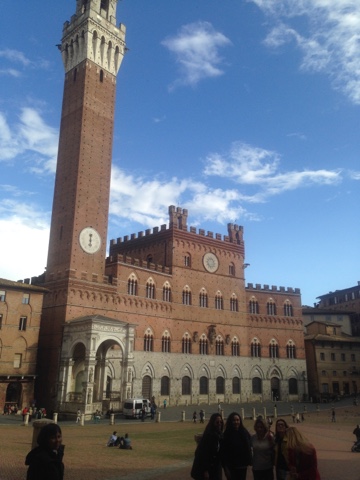 We found a nice, relatively cheap hotel (70€, Hotel Etruria) about 50m from Il Campo.  Its proximity and cost definitely make up for the view we have out the window.  After cleaning up and finishing yesterday’s blog, we headed out for a stroll through Il Campo and some streets up to the Duomo.  We happened to reach the Duomo at 6:25pm and we were informed that it was now closed and entrance was only by ticket at 10:30am on Monday.  Is it closed for mass? Si!  What time is mass? 6:30pm.  Perfetto!  We should be going to Sunday mass anyway.  We still can’t say the prayers in Italian but it is easy to follow along. 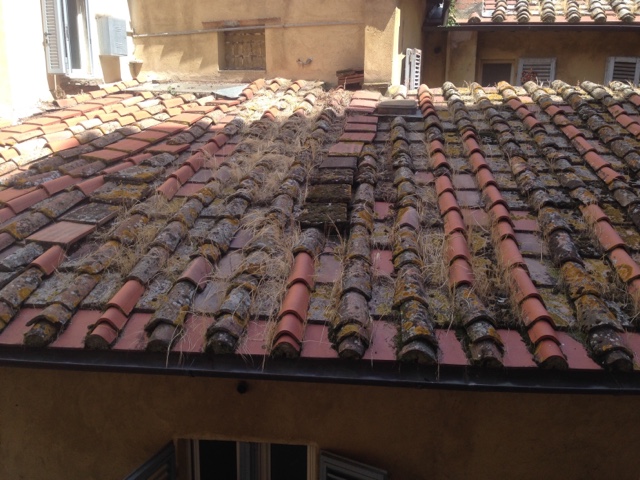 The 70€ view from the hotel window. If I lean out the window though, I can see the alleyway under the arch leading to Il Campo

For dinner, we wandered the back lanes rather than hit the tourist places on the piazzas.  We are glad we did; we found a fantastic and cheap but large local restaurant and we were the only non-Italians in the crowded eatery.  Our table was right next to the stairs leading down to the catacombs.  If you are ever in Siena, I do recommend Il Cavaliere Errante, on Vicolo di Provenzano across from the San Pietro e Ovile church. 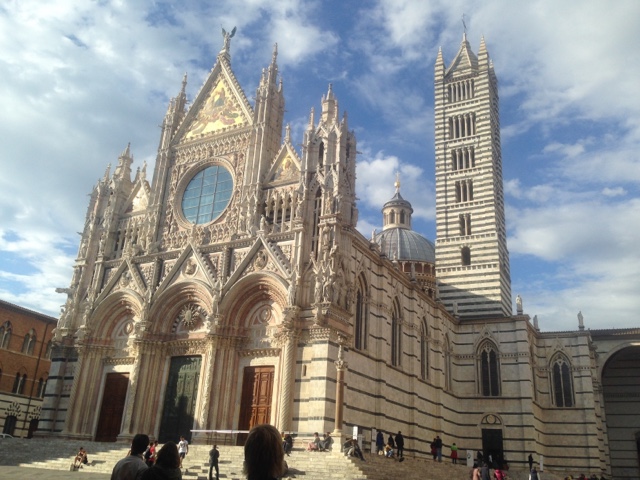 By the way, I heard one comment from a close friend on Facebook that said it appeared from the blog that this was our easiest walk yet.  I need to fix my writing style.  While each Camino we have done has its own challenges, in some ways, this one is the toughest.  The long flat early days helped us a little but the mountains into Tuscany and those dang later rolling hills are definitely more strenuous than then the other walks.  Maybe like giving birth, I tend to forget the hard bits as time passes but the physical challenges of this walk also have new issues like a much harder time finding and arranging lodging.  So far, nothing compares to the week walking through the Camino Ignaciano’s desert area but we just seem to be stronger (and wiser) with every Camino we do.  All is good. Peace y’all. 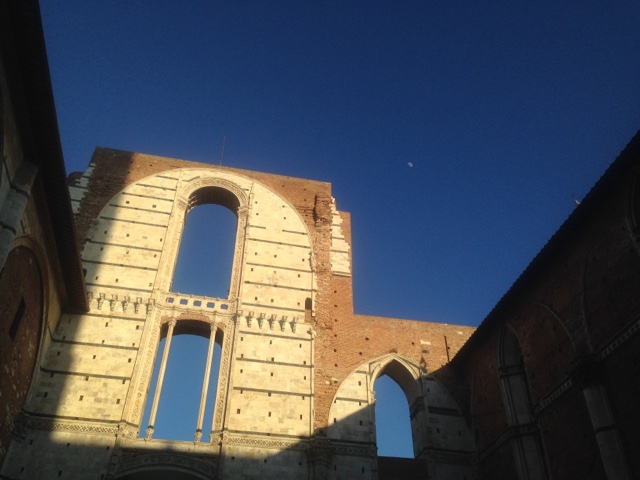 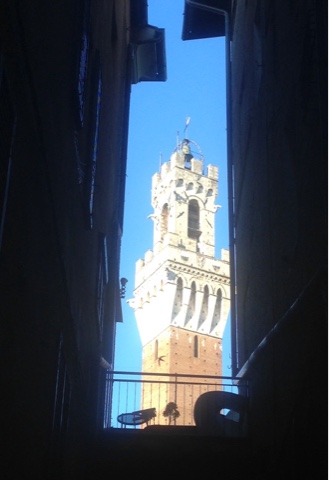