Today we were so rested from our day off and from walking mostly downhill under the early morning overcast skies that we decided to walk a little further than originally planned.  The normal stage from Siena takes us to Ponte d’Arbia on a scheduled 25.2km walk but with some big days ahead and rested legs, we kept going to Buonconvento, 4.4km down the way.  The fact that the only available accommodations in Ponte d’Arbia was at a small ostello also helped us decide to head toward Buonconvento where they have another ostello and several hotels / albergos.  We ended up in Albergo Roma, a very old but decent place and for 40€ per person, including dinner, it can’t be too bad. 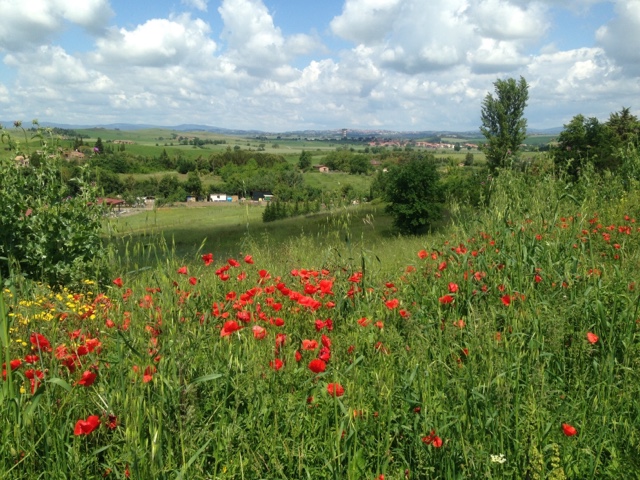 Looking back to Siena (the tiny dot on the centre of the horizon) from 12km away.

The first chuckle of the day happened as we left the walled city of Siena.  We walked through the grand Porta Romana but just metres before your reach the massive city gate toward Rome, you have to pass the equally grand entrance to the Ospedale Psichiatrico.  Yes, you have to be a little bit crazy to strap on your boots every day for a month and walk 850km just for fun of it.  This spot was the place where you are supposed to make the decision as to whether you are too crazy or not. 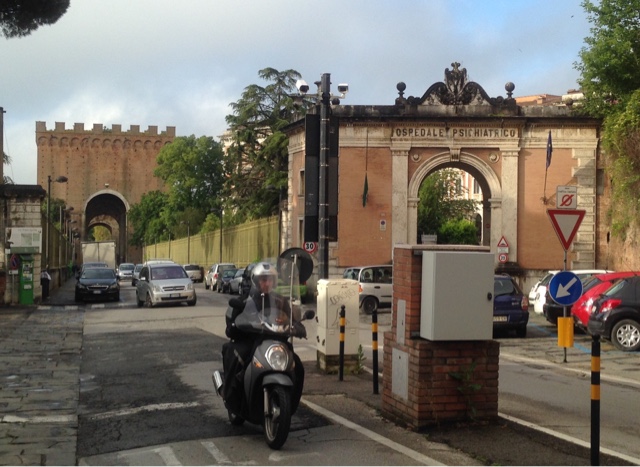 For those following us, there was some confusion today on the walk.  The GPS tracks that I had from one website were pretty different in a few places from the current official marked trail.  For example, about a kilometre after we crossed the SS223, just after the church of San Pietro a Paterno (no relation to the guy from Penn State), we were directed to turn right onto a very nice track (just before the river in the picture below).  We did as we were told, even though it did not match our GPS trail.  The route went past what some would describe as a bullshit factory, then turned south (left) through an industrial area, complete with a car demolition plant and then it dropped us out at the northern side of a traffic circle.  Now the GPS tracks that I had at that point showed the trail as bypassing the industrial area, coming from the east (left) to the circle and then going straight through the traffic circle to exit on the western (right, as we approached) side, then up a hill to do a rather long bypass of the town of Isola d’Arbia.  The current official marked route is actually now taking the very nice trail off the southern end of the circle, straight through town of Isola d’Arbia.  I guess the town – or at least its bars, cafes and hotels – have paid their dues to the people who make up the official route.  After passing (actually stopping at) a cafe, the new route turns immediately left, under a rail line, then right, along side of the rail line to the town centre.  The new route is well marked and shorter but confusing if you have old GPS tracks. 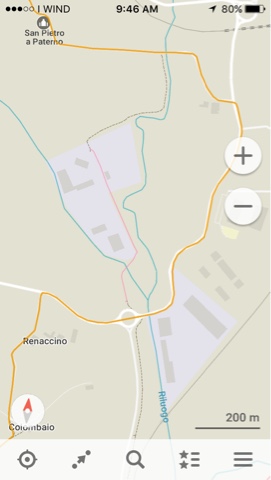 By the way, in that little cafe in Isola d’Arbia, we finally found some more of that olive focaccia bread that Massimo bought for us a few weeks ago.  It was so delicious then that we searched for more and now we had our chance to experience it again.  As Melanie said after that first bite though, it tasted like it was from the same batch that Massimo gave us.

Another place that the route varied from my GPS tracks is at the hamlet of Cuna.  They also must have paid their dues as the new route now goes straight through their main street, past an interesting castle which is now being renovated.  The old route directed us to just bypass the town.  We now have to get Monteroni d’Arbia to pay their dues as the marked trail still bypasses their town, complete with bars, cafes, ATMs, supermarkets, etc. all despite their nice signs on the trail and that welcome you into their village just 0.4km over that way or 0.6km down the next road, etc. 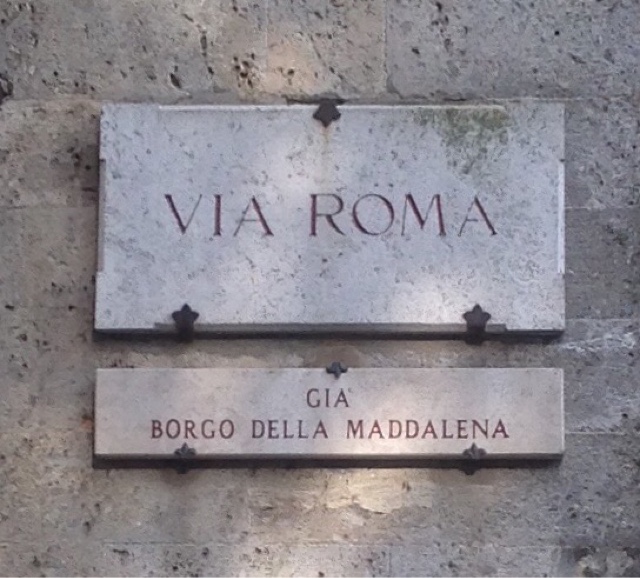 Surprisingly, we did not walk in a direction that provided any decent views back to Siena, at least until we reached Belvedere, a good 12km walk from Il Campo.  We have seen several roads or villages named Belvedere since Vercelli and every single one of them have been on a hill and had fantastic views.  As we climbed the steep hill up this particular Via Belvedere, we had high hopes but just before we got to the summit, we were directed to turn right.  I looked back towards where we came from and we saw nothing but the nearby bushes and trees.  In every direction, there was nothing impressive.  We were disappointed. Another 50m down the side road though, a better view of the surrounding farmlands appeared.  Then it hit us; in the far distance, hey!  That’s Siena way over there!  It was hard to believe that we walked that distance before 10:00am.  It was a little tougher to think that we had not yet walked half of what we expected to today. 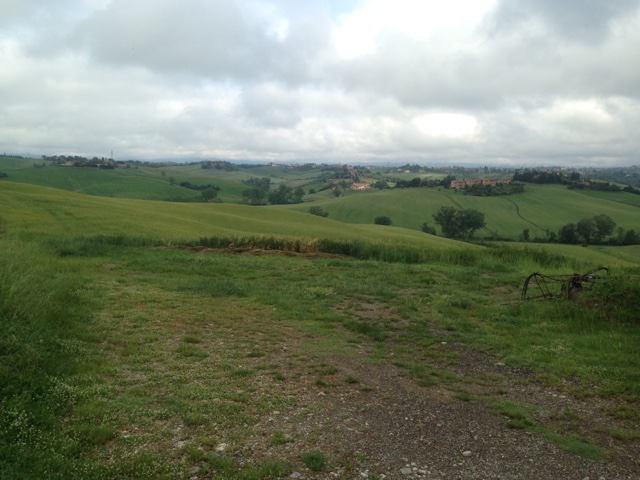 Several kilometres of today’s trail was paved in mud and I am not sure why.  I understand that rain causes problems for dirt tracks but I did not see anything other that gooey mud – no gravel, grass, rocks – on some trails through the hills and the last several kilometres leading to the town of Ponte d”Arbia. 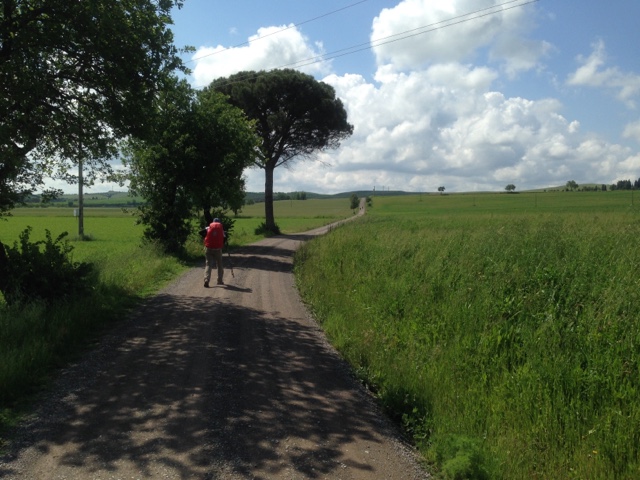 A few final random thoughts while I nod off to sleep (which means “no proofreading”) : First was the gypsy-looking couple sitting on an isolated hilltop at a spot where some trails come together, north of Isola d’Arbia.  We could not figure where they came from or what they were doing up there.  It looked almost as if they were waiting for a bus but where they were, a bus has not passed in the last two hundred years.  In any event, we gave them the usual “boungiorno” as we passed but they were keen to chat.  They asked a few questions about what we were doing and I did my best to understand their Italian, translate the questions into English and then translate my replies into Italian as well as to answer quickly.  At one point, the man whipped his head over toward me and asked me if I was Italian.  Either my language skills have improved beyond my wildest dreams or the guy was trying to con me somehow.  Either way, as we bid farewell to him and his wife, I definitely also checked to make sure my pocket wasn’t picked. 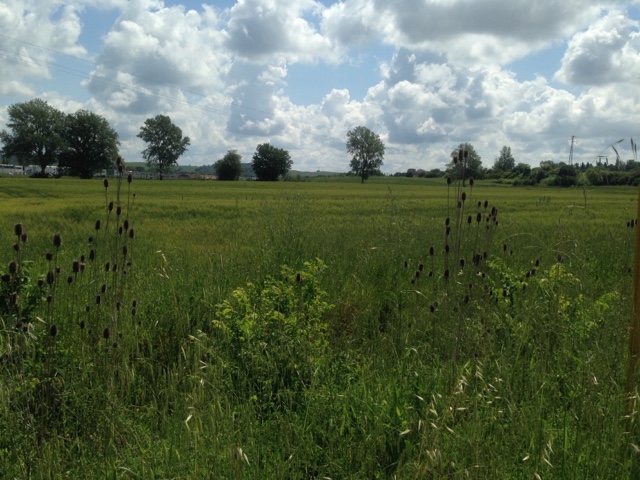 Another story that I will remember from today’s stage is about our host at the albergo.  When I called to make a reservation an hour before we arrived, I was told that the room for the night was 40€ but it included dinner.  That sounded like a great deal, but then he said that the cost was per person.  Now it went down to just a good deal.  As we arrived, the host wasted no time on formalities.  When we walked through his door, he recognized that we were tired pilgrims. He just handed us a room key and said we could register when we came down for dinner at 7:30pm.  He clearly said “cena a siete trenta” so to confirm, I repeated the time in Italian and English and he replied in English – to help me understand – “no; dinner is at seven o’clock”. Siette or Siete trenta?  He repeted himself: “Siete-trenta; seven o’clock.”  I was more confused than ever but we headed off to wash up.  After doing the normal after-walk chores, we found a bar with wi-fi and waited there until almost 7:00pm.  We walked the 50m back to our albergo at 6;59pm.  As we approached, the owner saw us coming and wagged a very disappointed finger at us.  To make life simple for the two poor tourists, he then told us in English to come back in 30 minutes – at seven o’clock.  I’m still confused.  But I am also tired.  Good night and Peace y’all. 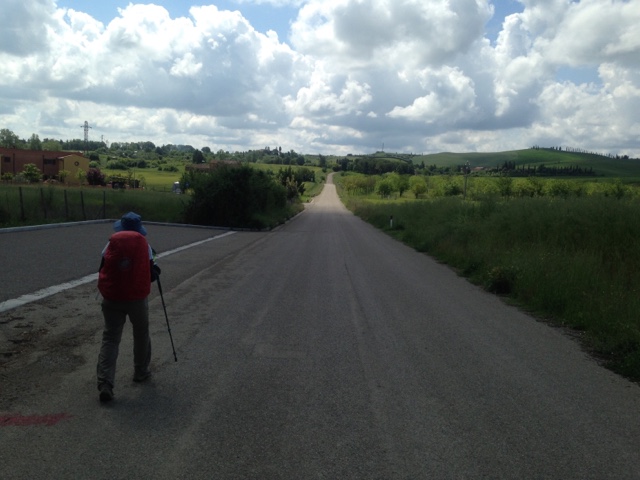 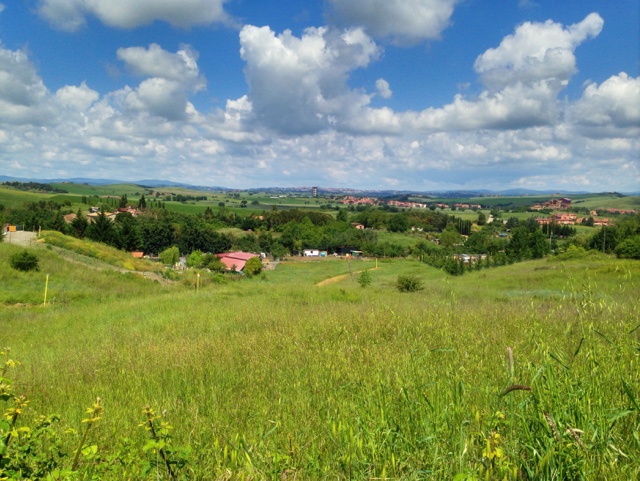 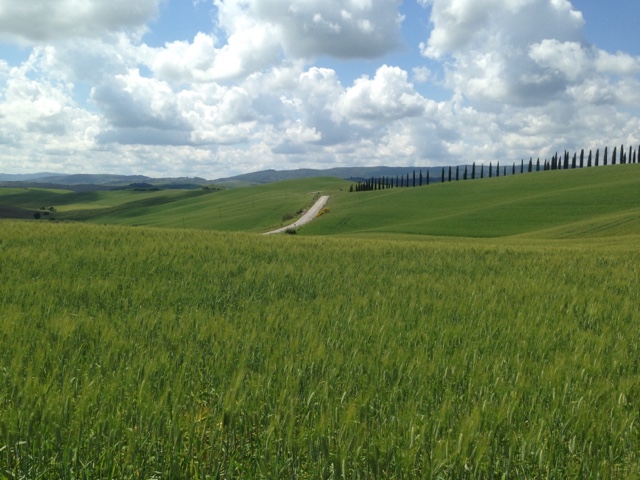 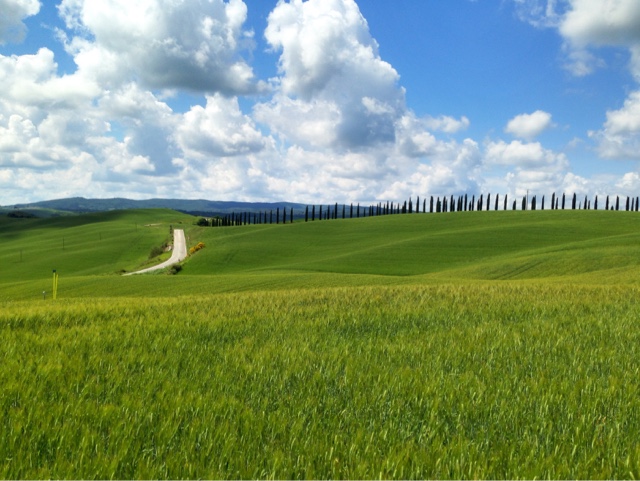 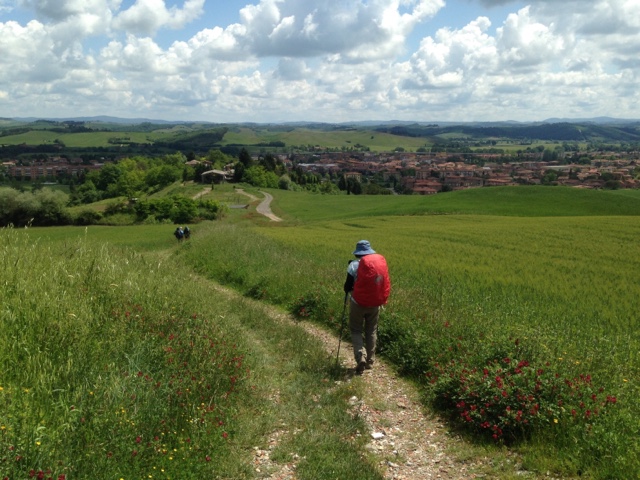 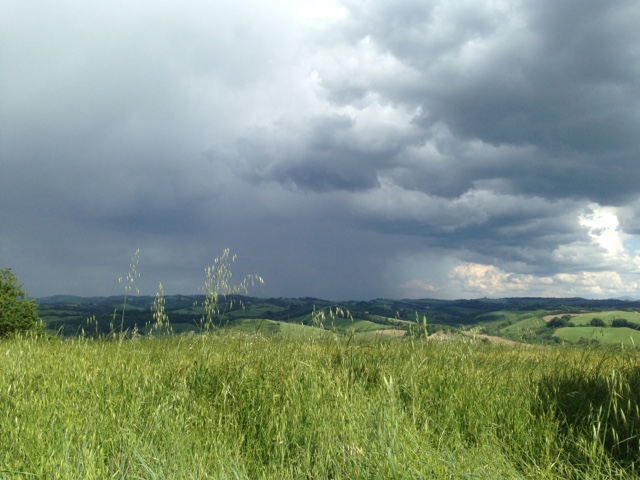 We were racing this storm to Buonconvento. We won. 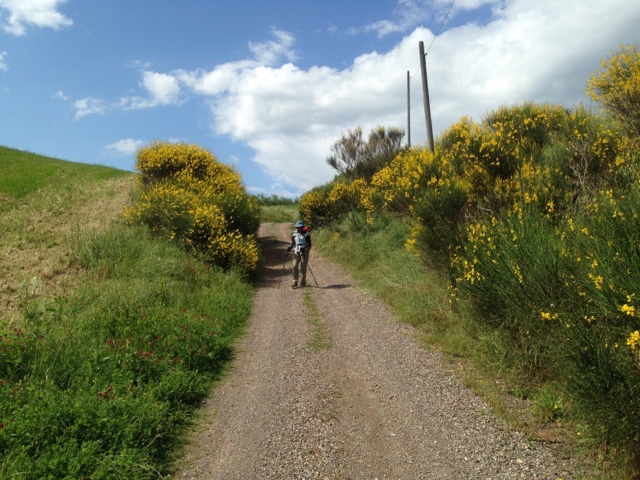 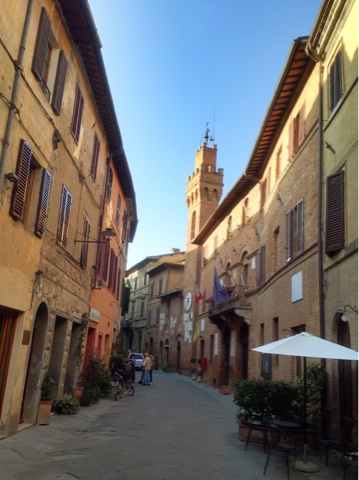