A fantastic day for a walk but again, it was a long one.  We must be getting used to it though as it wasn’t too much of a challenge.  To be fair, the vast majority of the first 2.5 hours was down a steep hill.  If only we had packed skateboards… 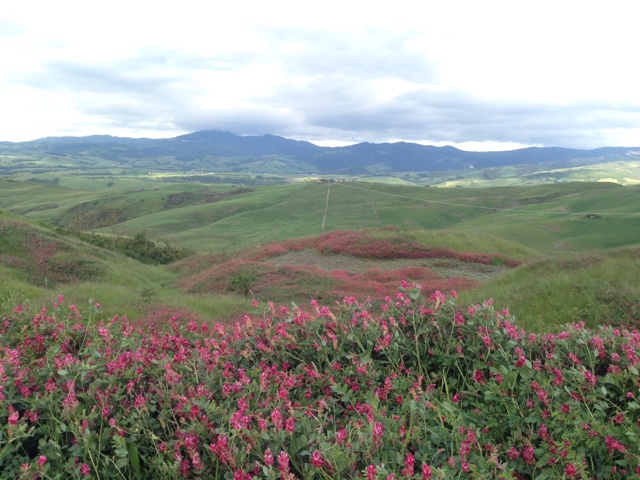 One disappointing feature, in a way, was the number of pilgrims we saw either taking a car to go down the hill, walking along the main road to save 7km instead of the taking the beautiful and historically documented original VF route, or taking the bus after 25km to skip the next 28km!  According to the man running the ostello last night, there were about 40 pilgrims staying overnight in Radicolfani, 16 in the ostello and about 24 in various albergos and B&Bs.  I reckon that a good bit less than half walked the actual route today and that is sad.  I understand that everyone has their own limitations and even we shortcut some in the storms over the mountains but today was a fantastic day for walking, ie, cool, overcast and breezy. 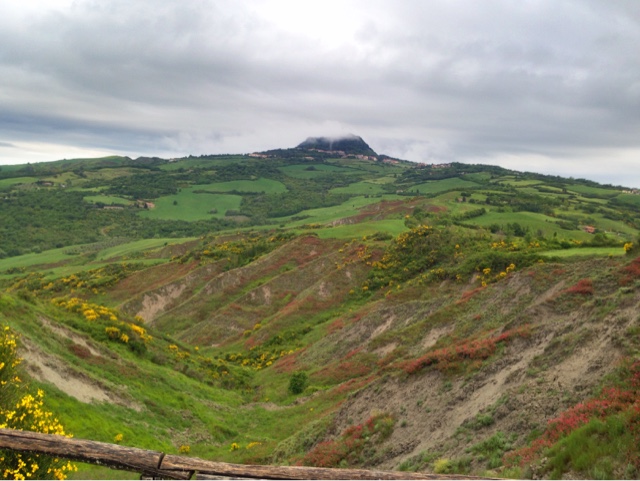 Another disappointing thing happened at the bottom of the mountain that Radicolfani sits atop.  After about 11km of walking downhill, we reached Ponte a Rigo, the location of the only bar / cafe that is on the route for the first 26km of today’s walk.  The place was fantastic with nice pastries for breakfast, fresh sandwiches ready for eating or taking away for lunch and a wonderful woman managing it. However, when we arrived, an Italian pilgrim was giving her an earful and as best I could tell, he was complaining about the ostello that the local church had just set up two months ago.  According to him, it was not as good as the ones on the Camino de Santiago.  After ten minutes of completely monopolizing the barmaid’s attention, we finally barged in and asked for a cafe and juice.  That seemed to stop his yapping for a few seconds so he finally left, still muttering as the door hit him on his backside.  If he was trying to compare hostels that have been operating for decades, or some even centuries, to those that a poor community opened two months ago, the Via Francigena may not be the best place for the guy.  And once he finally did leave, he turned left and followed the shorter path along the main road, rather than the route that was documented by Sigeric and the one that the original Swiss Guards took in 1506 to protect the Pope.  It’s not often we are on the actual original route but today, this guy missed his opportunity.  Another thing about him and a few others who were with him, we saw them in San Quirico two days ago.  If they stayed in that ostello they were complaining about, they either walked 44km over the mountain yesterday – which I highly doubt – or they bypassed the long climb up and descent down Radicolfani by just walking the same distance down the highway, or possibly, they took a ride.  Either way, why complain?  They are using hostels meant for pilgrims walking the Via Francigena, not for people on a holiday hike. 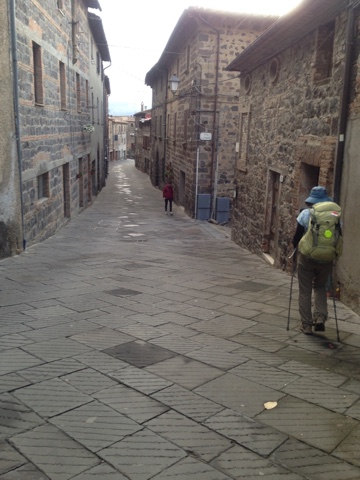 Okay, I’m done with the griping and bitching.  It actually was a good day for a walk and we only really felt tired the last 2km into Aquapendete.  For some reason, we had missed the news that there were two steep climbs during that portion, including a short but extremely steep and unnecessary climb just the last few hundred metres into town.  Oops, I’m not suppose to be griping. 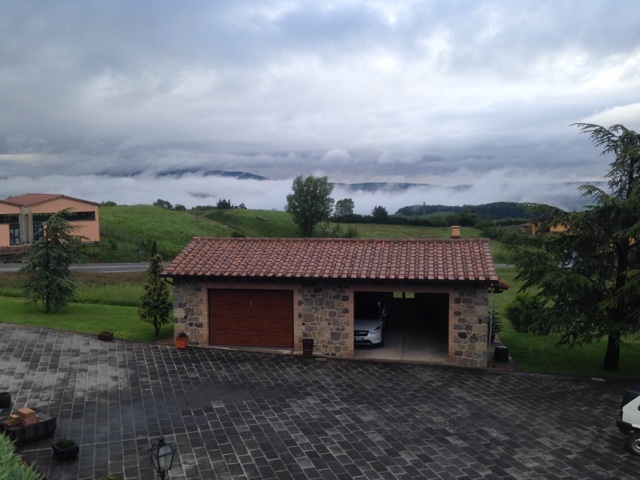 Those are clouds down there!

For those following us and worried about the two 32km days in a row, like we were, you may find, like we did, that we were strong enough by the time we got to them.  Even while the stages were long, they were not bad at all, even with the mountains and hills to deal with.  If you want to though, it is possible to break this section up into three days, rather than two by walking along the official route about 24km from San Quirico and staying in the Hotel Beyfin La Bisarca (60€ for a double room and breakfast).  It’s in the middle of nowhere, other than the Via Cassia and Via Francigena but they have a hotel, bar, cafe, restaurant, petrol station and car wash, all under one roof.  The next day, you could walk over Radicolfani, 8km up and 11km down and then stay in the donativo ostello in Ponte a Rigo.  Maybe, if you only have the Camino de Santiago to compare standards to, this isn’t a good option but I bet they fix any shortfalls soon.  Finally, on the third day, you can do a fairly easy 22km walk to Aquapendente. 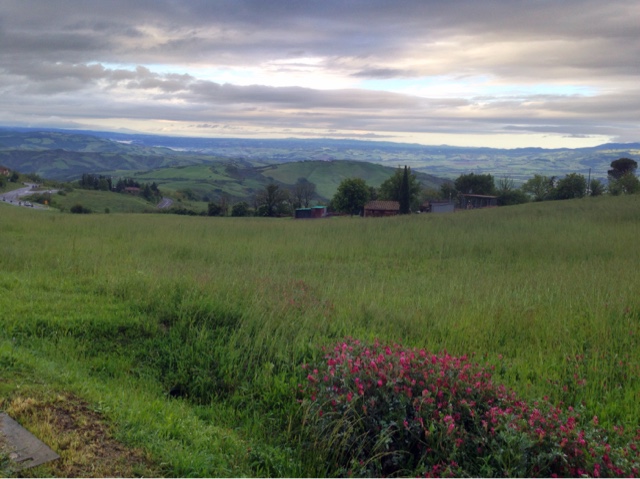 One last comment on people from today, we met a nice man working in his yard on the hill 1.5km before Aquapendente.  We met another one just as we reached the main square in the town.  Both were quite happy to chat with us for several minutes and put up with my poor Italian language skills.  They asked many questions about us and what we are doing.  Thankfully, I am getting better at answering the usual questions but they were so patient in re-phrasing confusing questions as well as giving me time to come up with the right words to reply.  I love that they care enough to take that time and interest. 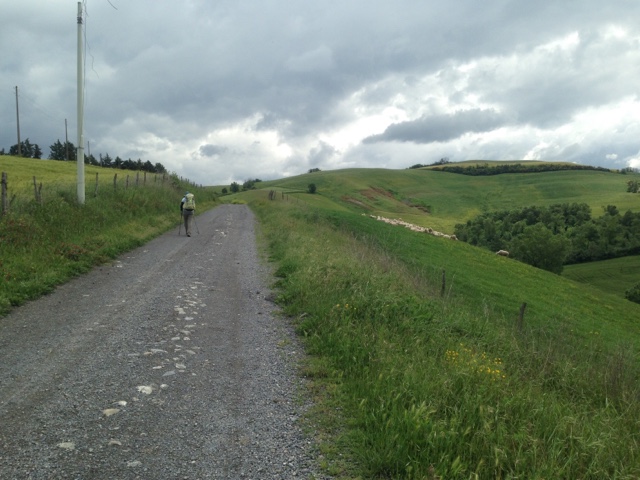 Off to dinner. Peace y’all 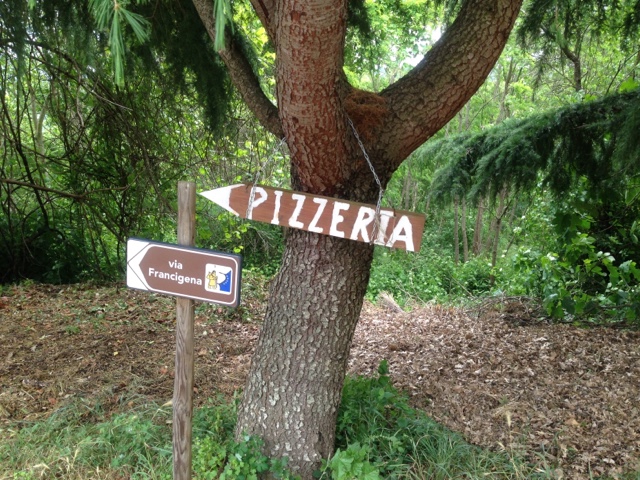 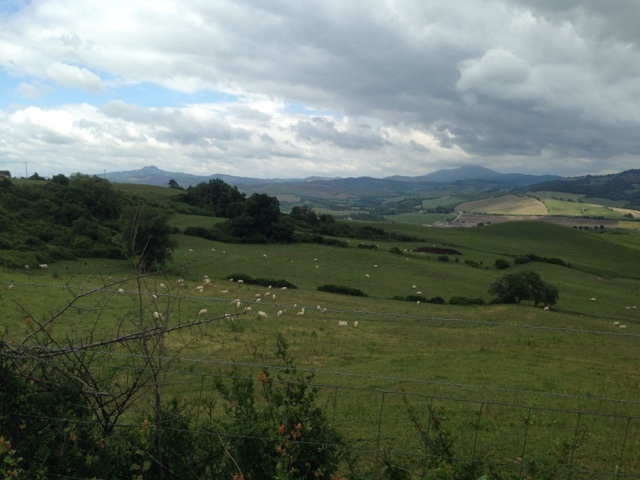