We are in Rome and it was a good day of walking to get here despite the burning sun and heat.  We really took our time today and, for the last of many times on this walk, we had a guardian angel appear just at the right time to help us. Someone is keeping an eye out for us. 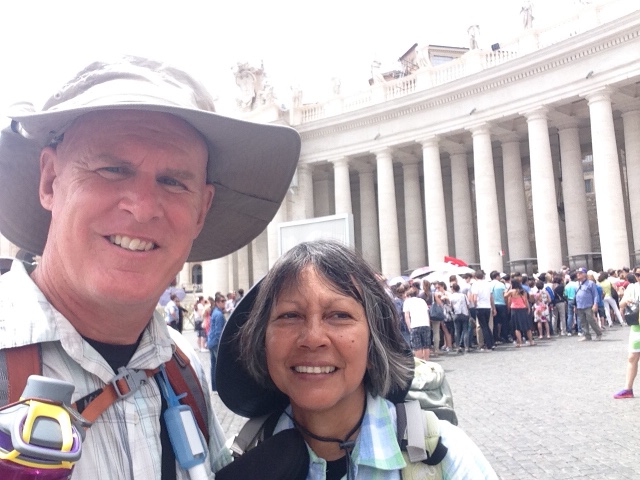 First, today’s distance is a best estimate, based on some GPS tracking as well as old fashion measuring on maps.  The “official” route, if there is only one today, was certainly not the GPS tracks that I had in either of two different programs, nor the one I had in my guidebook or the SloWays app / guide.  We roughly followed the signs that went down along the Via Cassia with diversions on alternating sides of the street.  At one point, we met up with Marco and his wife, two Italians walking from Bolsena who we first met entering Vetralla.  He asked which route we were taking and I had no idea.  We were leaning towards the one GPS route that we had which showed the path straight down the busy Via Trionfale but we were just looking for the signs.  Marco told us that that was the very dangerous and ugly route.  He suggested the new route that might just have been the one we had heard mentioned before but we did not know the details. 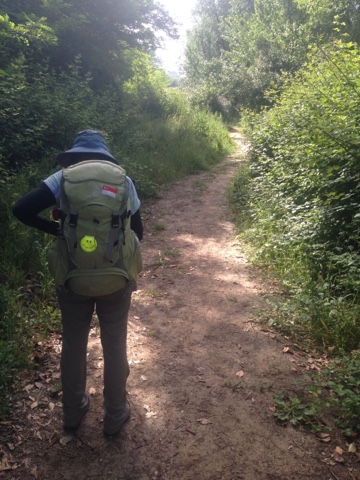 For those following us, please follow Marco’s advice.  It’s easy, safe, enjoyable and scenic although you will add a little mileage to the day as well as a few steep climbs.  Based on others’ descriptions of the alternatives, this is a million times better.  Basically, you follow the Via Cassia for about 5km south of the La Storta train station, using all the parallel paths of the main road as possible.  Even if you stay on the main road, it looked like there were always safe sidewalks or at least road shoulders for the whole distance.  The traffic was not too bad but we were lucky to be walking on a Saturday morning.  Down the road, look for house number 1081 Via Cassia on the right immediately after passing over Grande Raccordo Anulare.  From there, the next 4.7km is through wonderful woodland tracks and fields of the Insughertata Reserve before hitting an ridiculously steep ~100m climb into a small suburb with a strategically placed bar at the exact apex of the hill.  From there, we had about three more kilometres through the suburb before entering the Monte Mario Reserve area and more great paths.  All of that route was signposted. 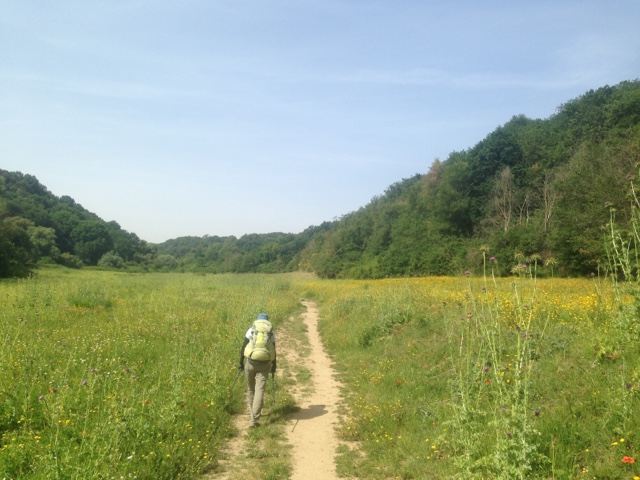 In the Monte Mario Reserve, we had fantastic views down over Rome and then got to the first place where you look down over the Vatican itself. That was a cool moment that we shared with lots of pilgrims who were just enjoying the moment themselves.  Marco and his wife were there as well as Armando and Sylvana, the Italian large group and two others who we didn’t know.  After lots of congratulating each other and photographs, Melanie and I started down the famous hill with 18 hairpin turns and better views of the Vatican. Sadly, before we hit the first one, Marco walked up from that route and said it was closed.  We then used GPS to find our own way to the Vatican, mainly along the Via Trionfale.  We later heard that everyone else just pushed aside a small barrier and walked that winding route anyway.  We missed out but it’s okay.

For those following us, you can no longer get a Testamonium at the Opera Romana Pellegrinaggi. [edited to add: we found out that this is not true.  We went there on Saturday and several ladies behind the counter said that they no longer issue testamoniums there but we happened to stop by again on Monday and there they were, handing out the testamoniums to two Italian pilgrims so we got ours too.  I haven’t a clue what happened on Saturday]. We will try on Monday at the Uffici della Canonical di San Pietro.  It is only opened in the mornings and not on Sundays or Wednesdays. 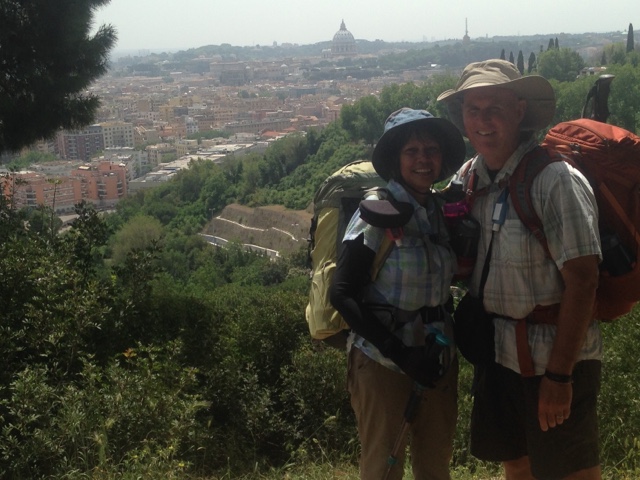 Arrival at St. Peter’s Square is not arriving like arriving at Santiago de Compostela by any stretch of the imagination.  There were thousands of tourists and a handful of pilgrims today, the opposite of the ratio in Santiago.  We expected this but the hawkers, street performers, unofficial guides offering their services, etc. were all a pain anyway.  We just aimed for a quiet corner of the barricaded piazza and enjoyed the view and the moment.  We walked 846km from Vercelli to Rome. That’s a decent accomplishment for us. My boots are well and truly done.  They are being retired after this walk.  May they rest in peace.

By the way, we really know we are in a big city again and it’s been an exciting few hours.  We were walking out the hotel door earlier today when immediately next to us, a drunk shoplifter was being wrestled to the ground.  An hour or two later, we were sitting outside a restaurant when a large explosion happened nearby.  I jumped up and found a family of four and another driver crawling out of cars that were badly damaged in an accident 20m away.  After figuring out that all were physically fine, I just directed traffic for a while.  I must have been a traffic cop in a previous life. We have also had to put up with all the usual tourist-town scams and prices in restaurants but we’re dealing with it. 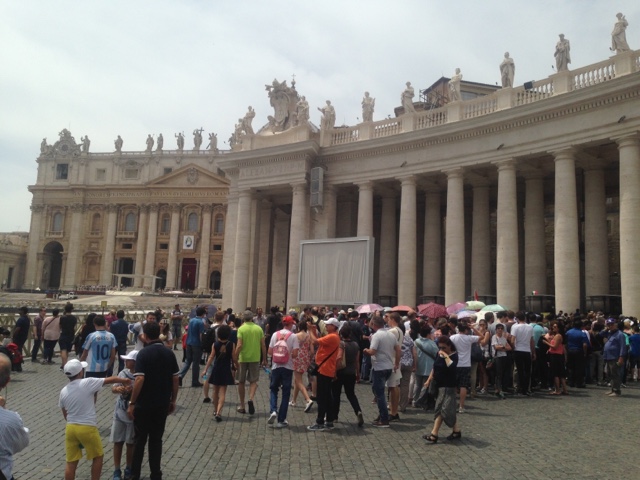 We have several more days in Rome.  Tomorrow we copped some tickets to the Papal Mass and Angelus in St. Peter’s Square and we will take in the Basilica, Sistine Chapel and Vatican museums on Monday.  Tuesday we have an appointment to go through the Holy Door, only open this year through the instructions of Pope Francis during this special Holy Year of Mercy.  There is much more of Rome to explore after that.  We have lots and lots of prayers to say for every person who I promised along the way as well as family and friends, those who have supported and encouraged us through the blog and Facebook, the people who helped us with advice on the trails, in forums or their own blogs, the friends we met among our fellow pilgrims and several guardian angels, particularly one farmer outside of Mortara.

Peace and love to y’all. 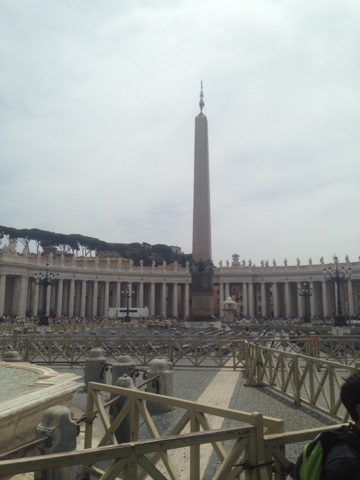 The barricades are up for tomorrow’s mass.