Okay, it’s official. We are tired.  Very tired.  The trails were a good bit better today than yesterday and I would say that they were safe all the way to La Storta but the sun was blazing hot all day and today’s route was quite hilly. There were several steep 100m climbs as well as descents.  There was also a few kilometres walking on what is best described as large, hard Cocoa Puffs and I’m not cuckoo for Cocoa Puffs.  This stuff was round, brown gravel and it was used on some new tracks so it was still several layers deep and unsettled.  Think of it as walking on marbles except not as slippery – so that it gave you confidence to walk without care in order for you to be taken by surprise when you fell or slid.  It was also not quite as small or smooth as marbles – so when it was not moving under your feet, it was digging into your boots and soles of you feet. 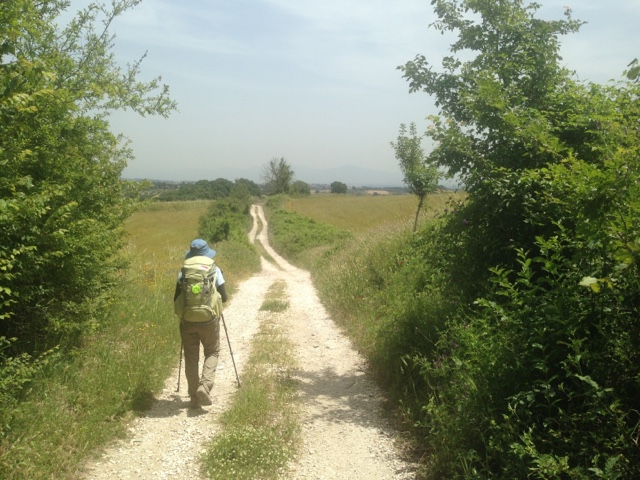 The route was shadier today, compared to yesterday but that is like saying that Michangelo’s paintings in the Sistine Chapel are more famous than the ones he did earlier in his career at Benedetta’s Bar & Grill.  There just had to be an improvement.  We were also a bit worried about what the guidebook described as a “potentially dangerous river crossing”.  Fortunately, by the time we got to it, someone had already built a bridge to replace the stepping stones across the fast moving river. 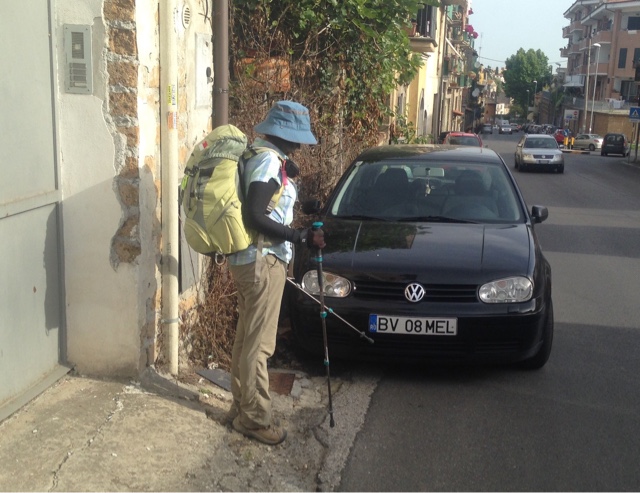 All in all, it was a good day’s walk but I’ll repeat what I said yesterday.  We are sad that the adventure is soon ending but we’ll be glad to get back to real life too.

Melanie just reminded me that we passed some very impressive houses today as well as a golf course. We must be nearing the area where the people make the big bucks.  We also remember a few Italians who we met today.  One old man in the piazza in Formello stopped us to chat a bit.  He had to shake our hands when we said that we had walked from Vercelli.  We also had a brief chat with a mechanic who was attending to a small broken down truck just outside of Campagnano.  I helped him and the owner push it out of the way so other drivers could get by.  See, I’m learning to help strangers better. 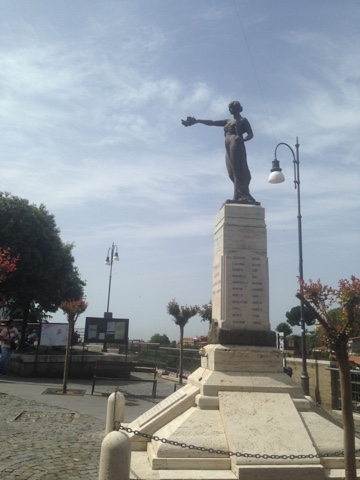 When you have trouble locating the trail in a city, always as a local to point out the way!

We didn’t see any of our friends while walking today but we did run into the large Italian group twice.  Actually, I should say we were surprised to run into them twice.  We left at 8:00am this morning and we were the first pilgrims out the door of last night’s hotel (Hotel & Ristorante Benigni, 75€ for awful wi-fi but with the best breakfast in Italy and a good restaurant for pizza).  I am not 100% sure that the Italians were staying there last night but they did have dinner there.  After two and a half hours of hard walking, we made it to the lovely town of Formello and we sat down at the first nice cafe on the route to have a drink and something to eat.  After a decently long stop, without seeing any pilgrims walking by, we started walking again and found the Italians at another cafe, 200m further on.  They were just finishing their break but they sure looked fresh. Maybe they stayed in a different hotel last night and left a lot earlier than we did or maybe they stayed in Formello and just drove into Campagnino for dinner.  I have to give them the benefit of the doubt.  As we left that village though, we could hear them behind us for a bit.  I thought that we were just walking faster as their sounds faded out after a while.  This area had the best trails that we had today for a couple of kilometres and then, as we rounded the corner of one bend, there were the Italians again, resting and looking fresh as daisies while Melanie and I were dripping with sweat. How did they do that? 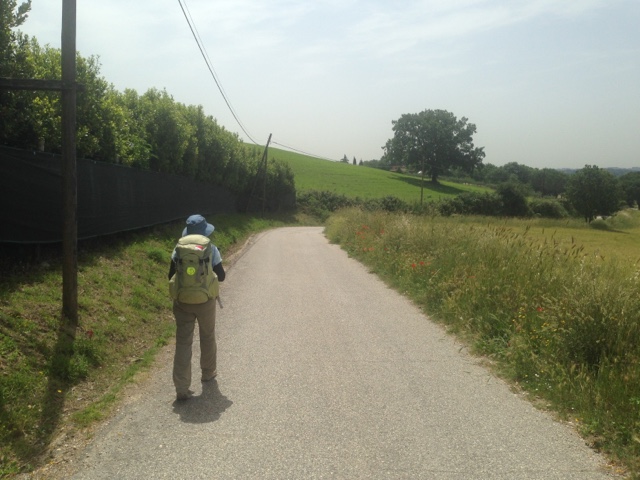 For those following us, when we saw the Italians the second time it was at a junction where the official trail goes straight but to the right is an official alternative marked “scenic route”.  The Italians were blocking the bridge leading to the scenic route so we took the regular official route.  I can not be certain but looking at my GPS and guessing the most probable route that the scenic track took you on, I would guess that you can shorten the day by one or two kilometres taking that alternative and have more shady paths but you would miss the new bridge and the Cocoa Puffs. 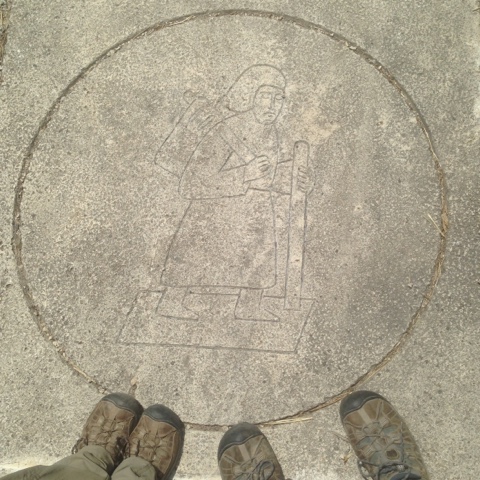 After getting into La Storta, we found our hotel right on the VF. (Hotel Cassia, 39€ with excellent wi-fi, towels and a quiet, clean room) and did the usual cleaning up.  Just in case we meet the Pope tomorrow, we wanted to smell a little better so we also walked 700m further down the Via Cassia near the rail station and found a laundromat.  That meant walking 700m back up the hill to get our walking shirts, pants, socks and a few other things and walking back down to get them done.  There was even an attendant there to help with the machine operations but he giggled when we asked him not to start the washer yet as we took off our sandals and socks and then threw the socks into the washer too.  By the way, I know wearing socks with sandals is like wearing plaid pants with a plaid shirt (my father’s favorite outfit) but on a Camino, comfort always trumps fashion.  While waiting for clean clothes, we had a gelato that was a waste of calories.  That might be our last one.  Now we are sitting in a bar, waiting for the attendant’s favorite restaurant in town to open for dinner. 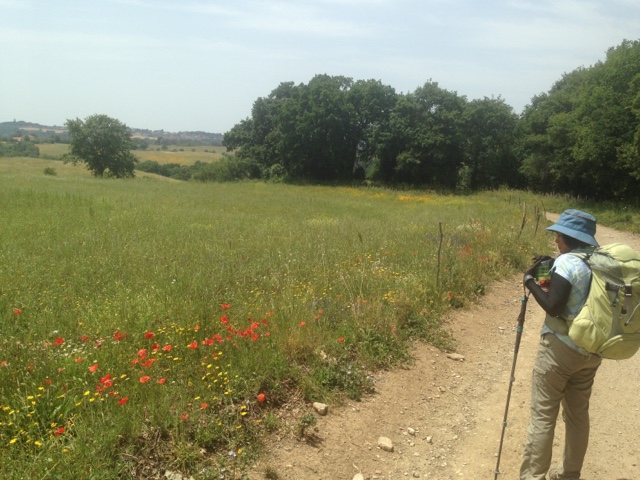 Life is very good.  Tomorrow we will be in Rome.  In case you are wondering, yes, I cried when I typed that last sentence.  Peace y’all. 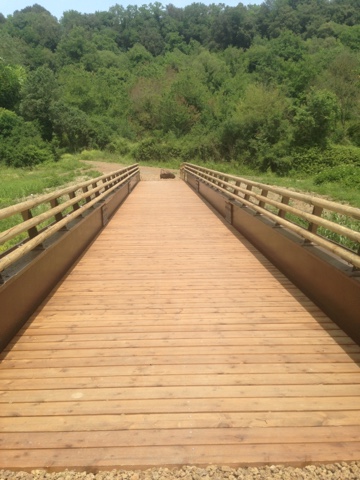 The brand new bridge that replaced these rocks in the river 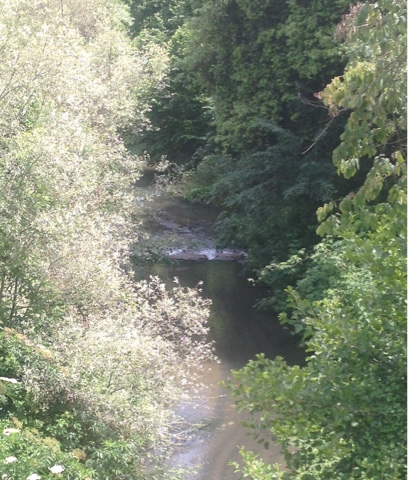 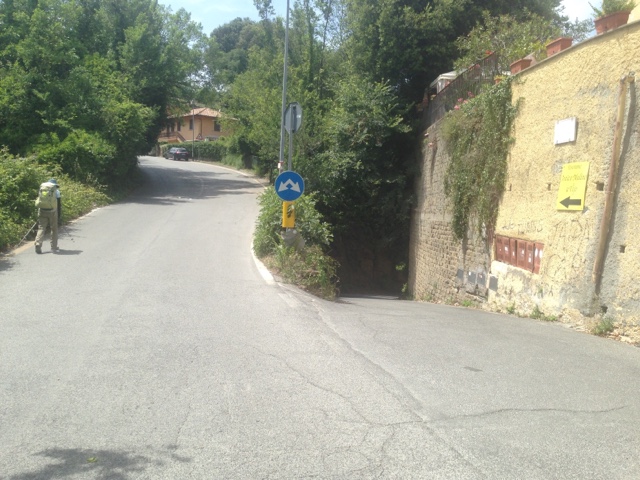 Michael’s theorem: When the road diverges and forks and your options are either up or down, the correct route is usually up.