Today was a mixed bag.  The bad part was that we had a long, hard walk in the blazing sun, with minimal shade, with some confusing signage on some very dangerous roads, mostly with a somewhat boring view and a very steep 100m climb into town at the end.  The good news is that we survived.  Barely.

The first bit of the route today was through the remainder of the town of Sutri.  I love looking at the old houses, churches, stores, etc. as well as greeting all the other early risers.  If you are out of the house by 8:00am in most towns in Italy, you get counted as an early riser.  The town was lovely in the morning and at the bottom of the hill, just outside the edge of he town, we also got to see a 2,000 year old Roman Amphitheatre which was pretty cool.  So far, so good. 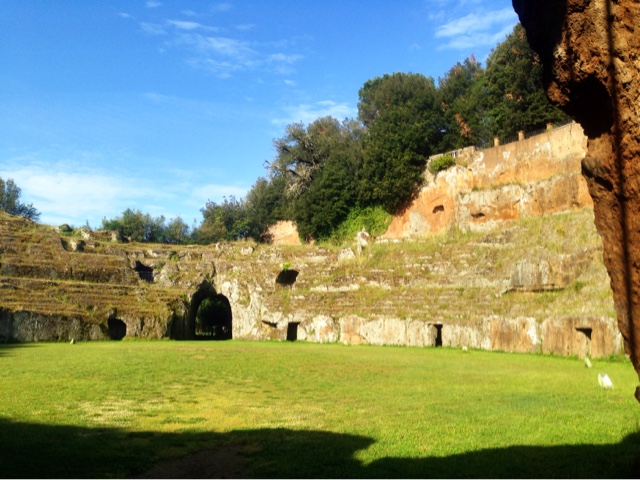 If you are following us, pay attention.  Just after the amphitheater, there were signs directing us to turn right, away from the Via Cassia and away from the Etruscan Necropolis excavation site.  My GPS with the VF route was telling us to go left, close to the Via Cassia and next to the excavations.  Sometimes the route changes but I like to be sure so I checked another GPS routing that I had in a different program but that had a completely different route out of the city itself.  I checked the guidebook and its route matched the crazy extra 4km route that the second GPS tracks gave me.  Great, what now?  We decided to follow the brand new signs and this was a big mistake.  DO LEAVE THE VIA CASSIA AT THIS POINT!  The bumper-sticker signs that we followed were so new that some of them were stuck on the ends of vines that had not had enough time to grow longer.  We figured it was some way to keep us off the busy Via Cassia so we took it.  This new path was a lovely dirt track for about 500m but then we were dumped out onto the SR40 / Bassano to Sutri road. At this time of the morning, it was the most dangerous place to walk that I have seen over four different Caminos.  The road was narrow, with just enough room for two cars to pass each other in different directions.  It was busy this time of the morning with cars passing every 10 seconds or so, on average.  It was winding just enough to give us many blind curves but not enough to encourage drivers to stay below double the speed limit.  There was not 2 inches of road shoulder on either side of the road to walk on.  Several times we just leaned hard into the bushes to avoid being hit.  Many of the bushes along side of the road are overgrown and thorny making visibility for drivers even worse and bailing out move painful.  Trying to cross the road to get in the outside lane of blind curves, to give drivers more time to see us, was just as dangerous.  It was a miracle that we were not run over. 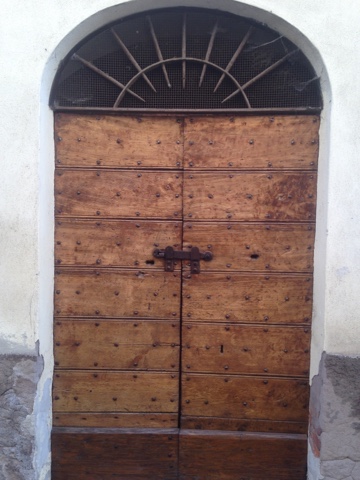 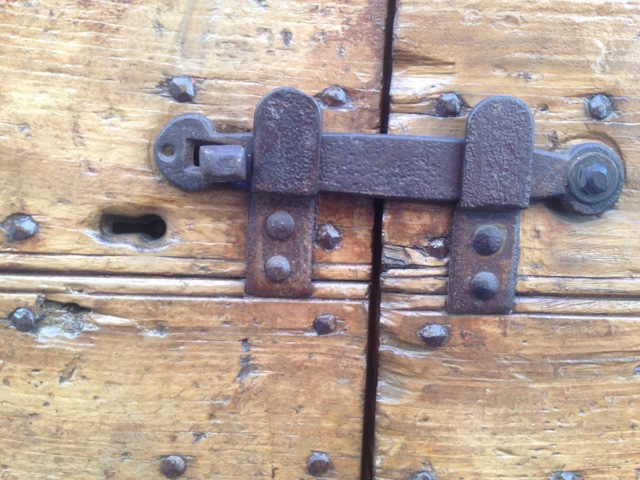 As soon as we got to the Via Cassia again, we heaved a huge sigh of relief but then looked on in wonder as several other pilgrims merrily walked down the safe sidewalk on the Via Cassia, saving themselves several hundred meters as well as saving them from risking their lives.  We were actually on the Via Cassia only a few meters until, again, we were directed to turn right onto the Rocco Romana Road.  For several sections, that road was almost as dangerous as the earlier one.  Be careful out there folks! 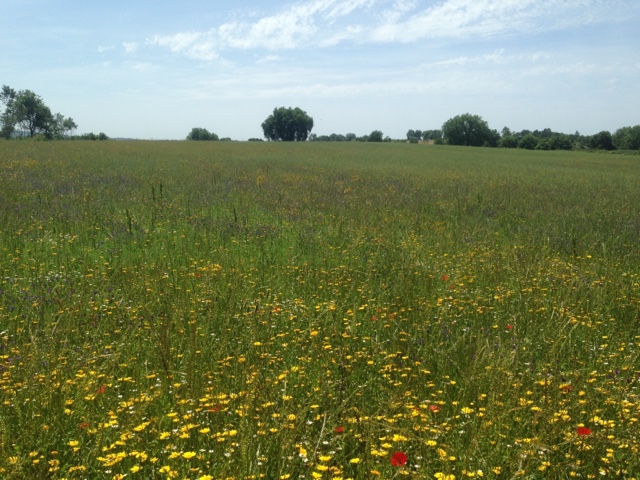 The rest of the day went by mostly safer but not entirely.  This was definitely not the best day’s trails.  Other issues came from nature though.  It was nearly a cloudless day and extremely hot in the sun.  There was very few places that provided more than a hint of shade and when we did get into an area like that, we tended to stop for a breather.  The tracks we walked along were mostly rural farm paths but they were wide and made of gravel.  A good bit of farm equipment was also using the same paths and they kicked up a lot of dust.  The final insult to the day was climbing up a street in the remote area up a hill that was called Monte Gelato.  For the entire climb, we just kept dreaming of what flavor we would have at the top.  Guess what.  There is no gelato at the top.  There was only one small stall selling lukewarm Cokes for double the normal price.  Give me a break. 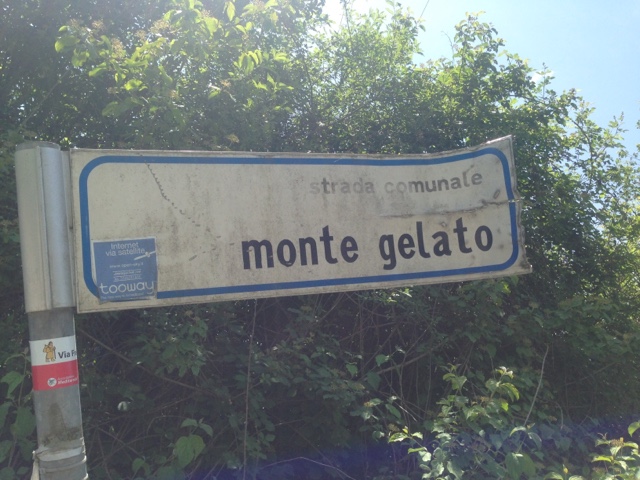 As long as I’m in a semi-foul mood, I’ll get one more thing off my chest.  When staying in hotels, we have been booking 2 and 3 star places which I know is somewhat low in the hotel hierarchy but in the north of Italy was good enough.  We are getting closer to Rome so I expected prices to be higher here but that isn’t necessarily the case.  The only difference in facilities, service and price that I have seen as we move south is that all of the sudden, we are only getting these strange towels to use.  They are as big as normal hotel towels but they are basically large white tea towels.  They are so thin that you can see through them.  I wondered if they were paper towels but they don’t rip.  After bathing and drying half of my body, I have to wring the towel out in order to dry the other half of my body.  What is going on? 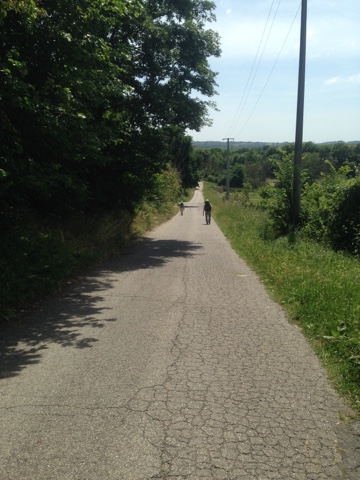 We finally saw several pilgrims we knew while still walking.  These included the Italian couple we first met entering Vetralla as well as the Belgians.  The French legion arrived in the edge of Campangnano just before us and Sylvana and Armando arrived just after us.  We walked together to the first bar in town and quenched our thirsts.  German (not Swiss) Lisa walked over then but she was already showered and changed.  We found out that she leaves at 6:00am every day to avoid the potential sun and to make sure she gets a bed in the ostello. 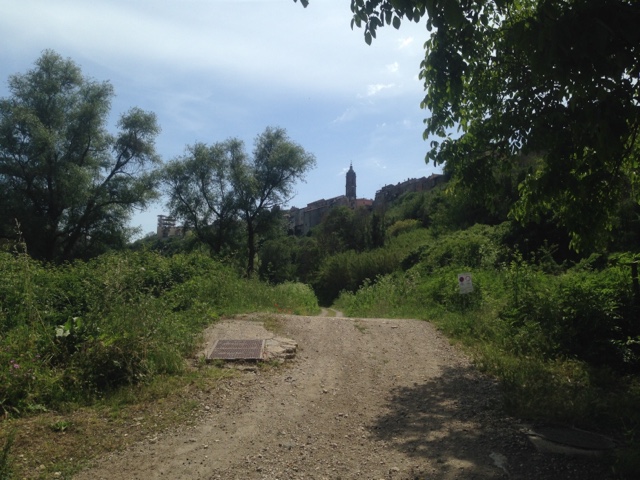 Our first view of Campagnano…. from 100m below it.

Finally, here is a story that I forgot to tell you yesterday.  I should never blog when I am sleepy because I never proofread the mess I write and I forget things. This was one I forgot yesterday but I think you may enjoy.

Yesterday, while Melanie and I, as well as the Belgians, Sylvana, Armando and Francesco were sitting in the piazza enjoying gelatos or drinks, the French legion of eight pilgrims walked in.  They asked in French if they could join us at the tables we had pushed together outside.  Amanda, the Belgian woman in our group replied in perfect French, that yes, they could join us but that we were speaking in English at the table because of our American and Singaporean friends. Actually, this wasn’t entirely true because we were speaking some in Italian as sometimes that is the best way to help each other understand what we meant but I understood her intention.  The general leading the French shrugged his shoulders with an audible “Ahh” and they all sat at the table next to ours.  So far, I was okay with everything.  Amanda did not sound condescending when she said that we all were speaking English because, effectively, that was all we knew.  She was just being polite and helping to avoid the whole dynamics of the group being changed.  She didn’t want us to feel left out.  I also did not feel slighted when General deGaulle chose to no longer join us at the table and conversation.  I would feel bad that we forced them to speak English anyway.  The best part though was the last of the French women to sit down.  She stood next to me and with all the utter disdain and pity that only a French woman of high breeding could manage, she looked down at me, wrinkled up her nose and asked “Ahmeeracen?  Only Eengeesh?”

Sometimes I can’t just turn the other cheek.  I replied with a smile “I am pretty good in Indonesian and Malay. I know a good bit of French, Italian and Spanish but I do not speak any of them well enough to hold a general conversation.  I also know a bit of Arabic as well as some Mandarin.  I would also like to remind you that if it weren’t for Americans like me, you would be speaking German.”  Language snob. 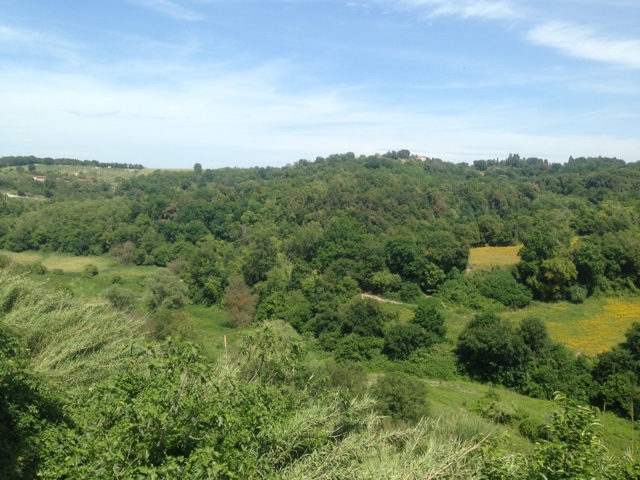 That’s it for today.  About 40km to go.  Melanie and I can’t wait. As always, we are sad to be nearing the end of our adventure but we are also greatly looking to getting back to real life.  Peace y’all.