What fantastic trails we had today!  We had at least nine beautiful kilometres of trails deep inside the forest.  Part of that was on a wide gravel path in the park surrounding a huge crater and part of it was on a tiny dirt path along side a lovely stream which was crossed twice by log bridges.  The balance of the route today was mostly on quiet country lanes but we also went through the newer section and ancient section of Capranica.  A fantastic walk! 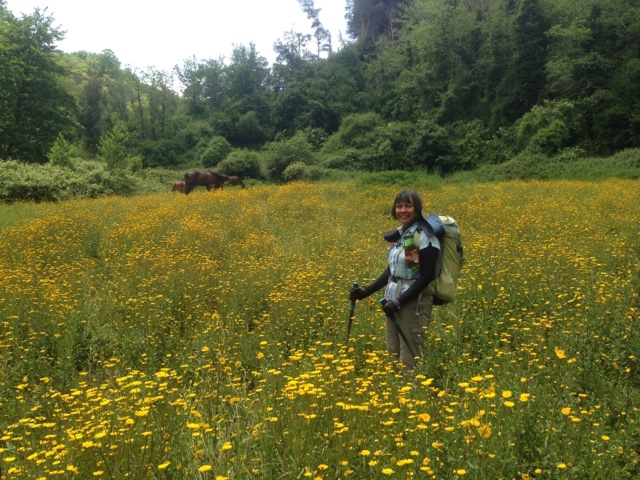 Along the way, we also met with two pilgrims from Vicenza.  Armando and Sylvana are a lovely couple who are our age – almost exactly, it turned out – and they are walking from Viterbo to Rome.  We walked with them for about two hours in the morning before saying goodbye when we stopped for a lunch break in Capranica.  After lunch, we caught up with them again because Amando’s legs were giving him great trouble.  Based on his description, I believe that he has severe shin splints.  When we saw him the second time, he was stretched out on a picnic table, getting some cream rubbed on his legs and ankles.  When he tried to stand up and put his shoes on again, he was obviously in great pain.  At that point, deep in the forest on a small trail, I suddenly pictured myself trying to carry him for several kilometres out to a hospital.  This was going to be bad but then it struck me – I lent him my trekking poles.  I guess in finally figured out why I needed both poles (please refer to Day 3 if you don’t know what I am talking about there). 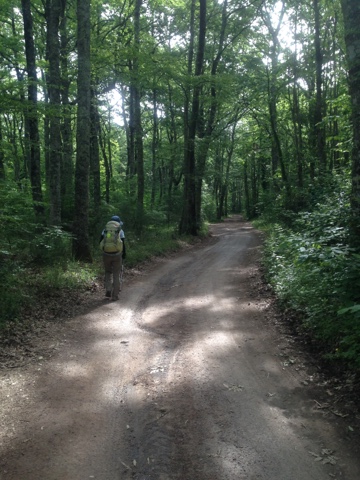 We walked with that couple to Sutri. They had to go an additional 4km to their B&B.  The poles did help him and the couple insisted on coming into Sutri to buy us an ice cream or drink in gratitude.  I kept my mouth shut as, the whole way into the town, I was wondering how I should thank him for saving me from carrying my sticks!  Just before sitting down in the main piazza for a drink, we saw the Belgian couple who we first met back in San Lorenzo Nuovo, while watching the car rally at the cafe.  Armando and Sylvana knew them from another stop so they also invited the Belgians for a gelato.  A few seconds later, another Italian pilgrim passed by who they knew from their first day of walking and he also joined the group.  Before we got to the table, Lisa, the Swiss girl from the ostello in Abbadia Isola walked by.  The Belgians knew her from another stop but she had not yet met Armando and Sylvana so she didn’t get any ice cream.  It pays to be known by everyone because you never know who is buying treats!  All we are missing is Anders.  We haven’t seen him since dinner in San Gimignano. 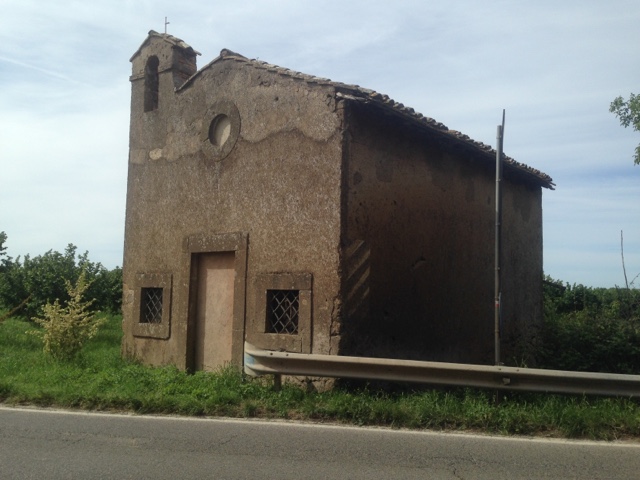 We had a fantastic pilgrims meal at a fancy restaurant down the main street, two piazzas away.  When we went to the back room, we initially admired the stunning mural on the opposite wall of the most beautiful and typical of Italian landscapes.  It took us several seconds to realize that it wasn’t a mural at all, we were on a very large covered deck and the mural was actually the landscape behind the restaurant.  Wow! 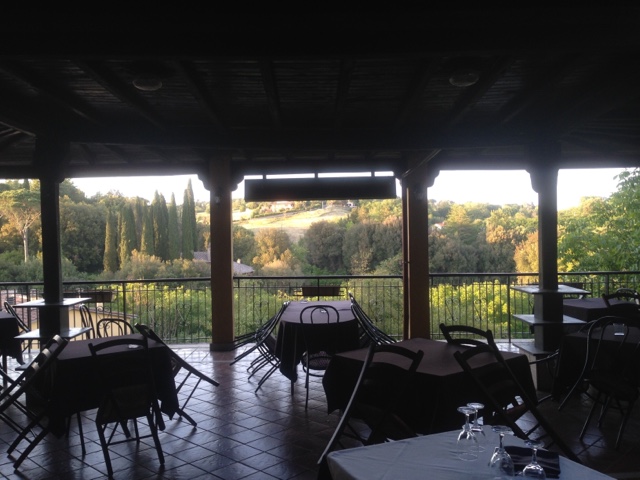 For those following us, we are staying tonight in the two star Hotel Sutrium.  We are completely off ostellos now.  If a private bathroom is not attached, we look elsewhere.  As we get closer to Rome, the rooms are more expensive so this one is 60€ but with supposedly good breakfast tomorrow.  It has great wi-fi and the mold in the bathroom is only on the ceiling.  You get the good with the bad.  We booked by calling them yesterday.  I expect that to keep costs down, we’ll need to be booking one star hotels tomorrow and half star hotels the following day. 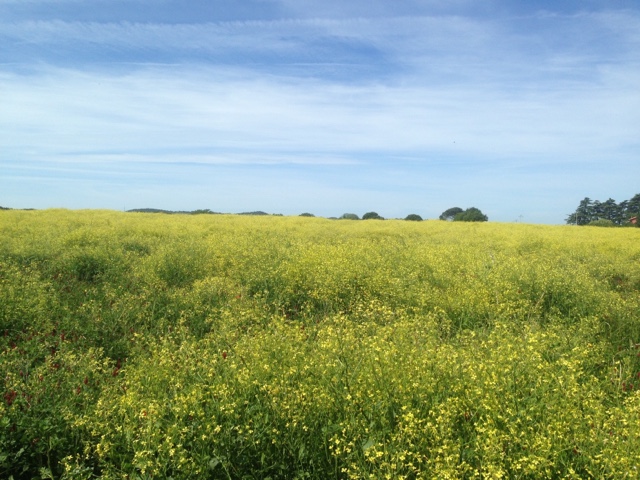 All is good, life is great and we are nearly there. Peace y’all and Happy Birthday Alex! 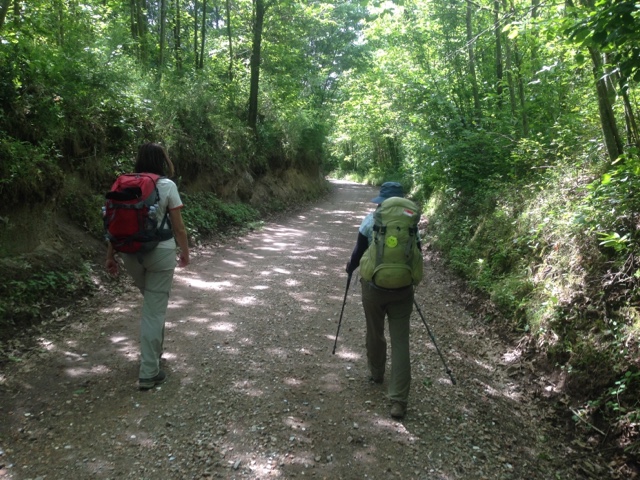 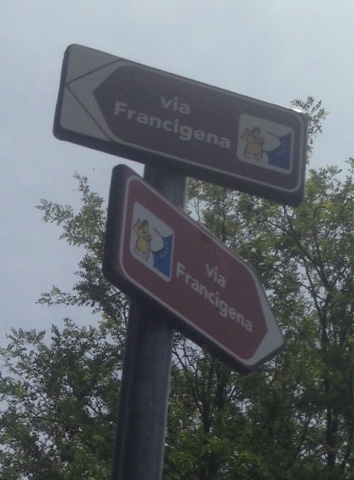 Great help at a fork in the road in Capranica 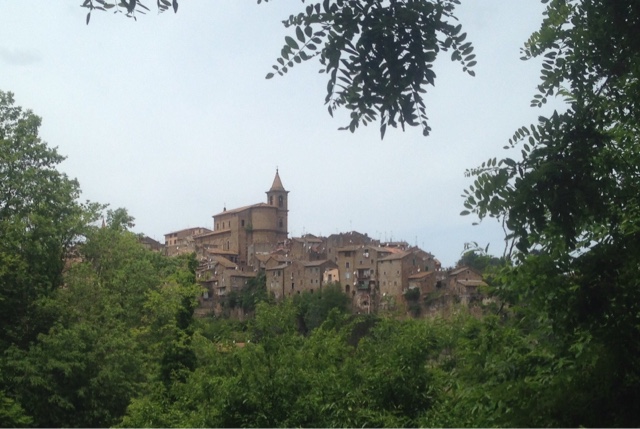 Looking back at Capranica 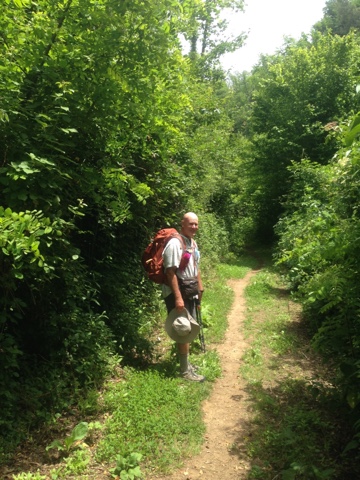 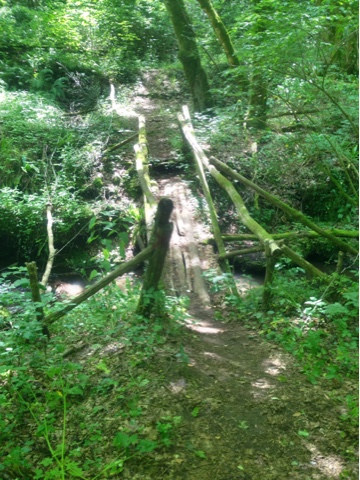 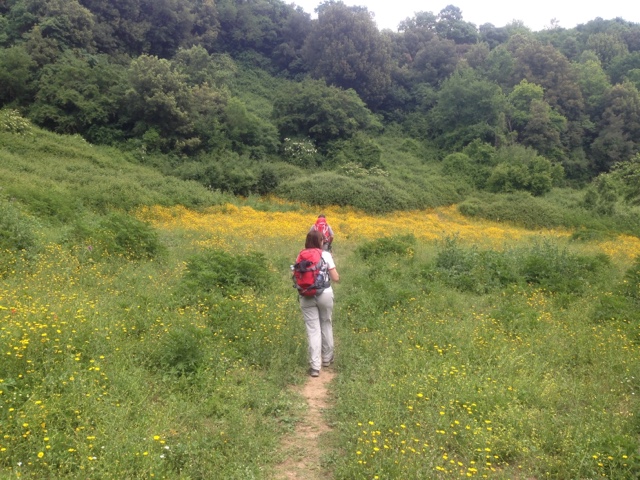 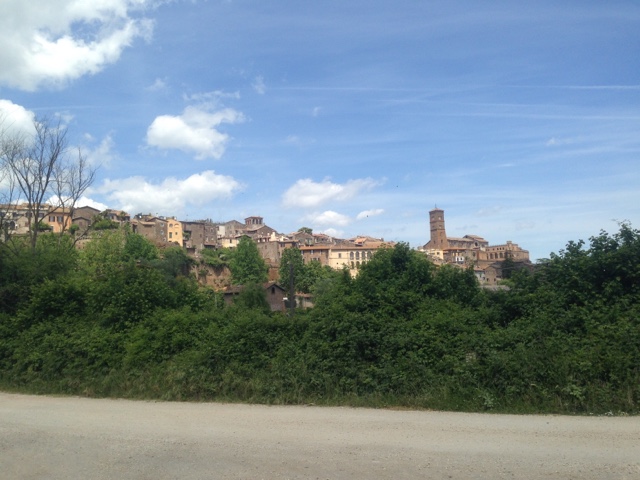 Sutri from below the town 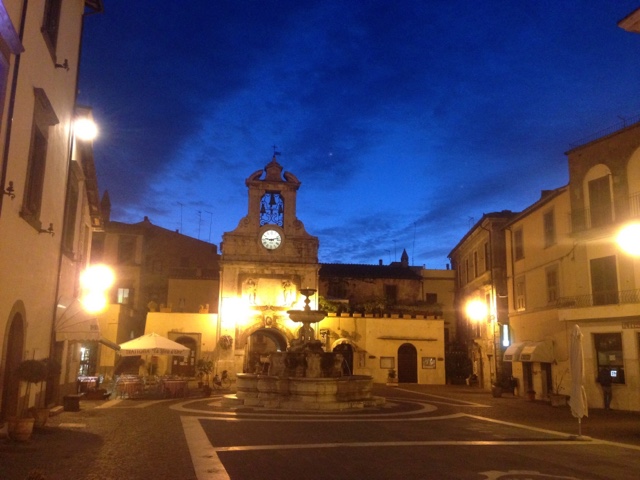 The main piazza at sunset.