Remember as you read this that you are laughing with us, not at us.  That’s because we laughed ourselves. Well, after a while anyway.  Quietly.  So that we didn’t look like we were crazy. 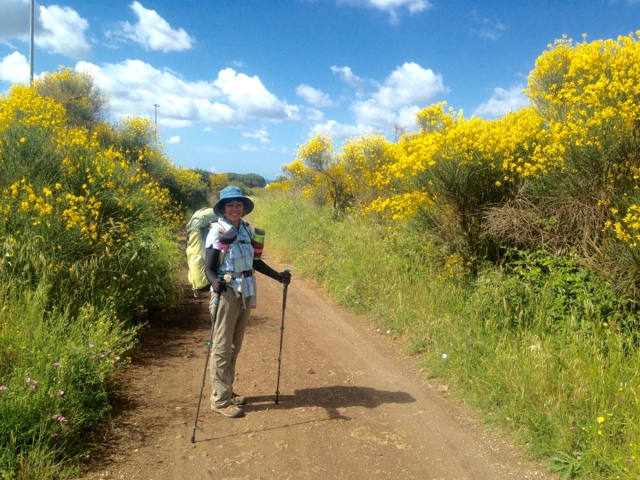 Today was going to be a short day on fairly flat land. The only negative was that when we set out, there was not a cloud in the sky so it would get hot.  We can deal with that though.  As I mentioned yesterday, Viterbo is just a big ugly city.  It still has some beautiful buildings though, including the massive Palazzo dei Papi, (Pope’s Palace) which was for a time the home of the pope when there was trouble in Rome. 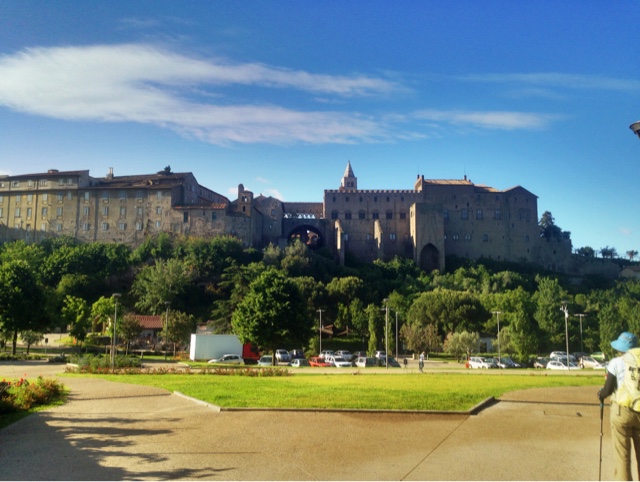 One decision that I made was that we would not wait for the hotel’s cafe to open at 8:00am in order to have breakfast.  I wanted to start early but, because of the good wi-fi connection in our room, as well as our internet addiction, we only got out the door at 7:30am.  Based on the many cafes that lined the long route into Viterbo yesterday, I also made the decision to walk towards the edge of the city before stopping for breakfast.

As with all major cities on these walks, it is often hard to follow the signs that guide you on the way.  We tried hard to take the official route out of the city but older routes, still marked, made it confusing.  Following the guidebook and GPS helped only a little because they didn’t match each other or the newest signs too.  None the less, we managed to pass just behind the Pope’s Palace, rather than in front of it where I knew the official route must lead, before coming down the staircase to the base of the hill that the palace sits on.  No problem, I said to myself, just before I realized that we had stopped passing by cafes a few hundred metres ago.  No worries, just keep going.  We were barely outside the old city walls and there was still a lot of urban areas to go through.

We were finally on trail, according to the signs, guidebook and GPS and heading over towards a gate through the old outer walls of the town.  Unfortunately, that gate was cordoned off with a barricade on either side and a sign saying that it was dangerous to pass under the arched gate because of falling building stones.  Great.  I was in no mood to do any detours this morning.  Not one single step off course, I said to myself.  We then decided to live dangerously and we moved the barricades momentarily, quickly passing under Viterbo’s falling arches with our hands covering our heads.

After this, the fun began.  According to the Francigena signs, we were supposed to walk across the street and head straight on down a side street but there were two problems that were obvious even to me.

First, the street we had to cross was a major thoroughfare for commuters at rush hour, going both directions.  Think of it as the PIE in Singapore, the Beltway in Baltimore or some major highway in your neck of the woods except that all the traffic is compressed into a single lane in each direction and still able to drive at double the speed limit.  There are no crosswalks or traffic signals in sight anywhere.  How do we cross this monster?  We have barely walked for 20 minutes today and this was going to be the time to play Russian Roulette with cars and trucks? Hmmmm….

The second problem seemed to be less on an issue to me but that is because I’m a guy.  The road that we were supposed to walk down after we survived the death march across the highway was obviously outside of civilization. The only thing we will see on that road is lizards dating away from our stomping feet.  There would not be a long urban walk out of the city and there would not be any cafes or bars down that road.  Again, to me, a guy, I didn’t have a huge issue because right on that corner of the death highway and the abandoned road to oblivion was the first McDonalds that we had seen in Italy.  Now, I don’t usually frequent McDonalds except at 10:30pm, after scuba lessons are over and I’m driving home famished.  But in a pinch like this, surely it will do, right?

Keep in mind that I do not drink coffee, but surely Melanie will understand that coffee is coffee and a cup at McDonalds is just as good as the black stuff they are serving at all those Italian cafes, right? At that point in our conversation this morning, Melanie managed to stab me in both eyes, using only laser beams shot out of her own eyes.  Without speaking a word, she made it perfectly clear that we were going to turn around and go back to the city to find a cafe.

“Not a single step off course”, I muttered to myself under my breath, careful so that Melanie would not hear me.  We looked up and down Suicide Speedway and saw nothing.  We walked to the nearest side street and started down that, hoping for a cafe but we saw nothing.  We crossed the large parking lot and saw nothing.  We headed towards the nearest church steeples but still saw nothing.  We crossed to the bus depot but saw nothing. “Over there!” Melanie shouted with joy, pointed across serval more roads and a piazza.  “The yellow building looks like a cafe”.  So that’s where we headed and she was correct.  Not only was it a cafe, but it was also open so we went inside.  I was so overcome with emotion that I brushed aside my sense of déjà vu when I saw the monument across the street.  I was also confused a bit, trying to picture where we have seen this bartender before.  After ordering a cafe Americano for Melanie and a juice of myself, we grabbed two pastries and headed to the back room to have a seat.  That’s when it hit us.  This was the cafe that we had lunch at yesterday…. just down the street from our hotel.  The hotel that we left 45 minutes ago.  Bloody hell.

After eating in relative silence, we headed out again, using the newly found shorter route and managed to cross the dreaded highway.  It wasn’t really rush hour any more.  The route took us down lovely farm tracks, past an ancient Etruscan tomb and through some interesting paths along a homemade Stations of the Cross trail.  It was there that we met a man who described the trail in front of us, just as he appeared to be closing and locking a gate that we just passed through.  I hoped we were the last of today’s pilgrims through by that time.  I doubt anyone else took as long as we did to find coffee. 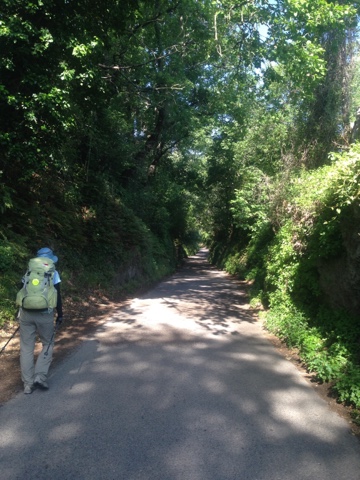 Today also had a record number of other pilgrims that we saw including the Belgian couple walking from Pisa, a group of eight Italians pilgrims picnicking at a viewpoint over a valley, another couple just as we entered Vitrella, a couple walking the whole Via Francigena in stages with this being their last section from Aquapendente to Rome and four bicyclists.  Four Swiss women also just arrived at our Albergo a few minutes ago.  We have stayed in the same hotel and eaten dinner in the same restaurant as them for the third day in a row. It was darn near Grand Central Station out there today. 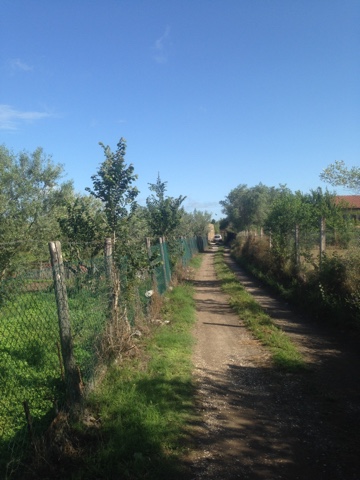 We are staying tonight in the Albergo Da Benedetta (57€ through Booking.com).  It is in Vetrella, very close to the route, but about 500m short of the old walled town.  It has nice rooms but like a few other places we have been “the wi-fi is out because there was a bad storm the other night”. We walked into the old town for lunch and managed to also take in a funeral at the Duomo.  Another highlight, sort of, was seeing what remains of an historic 900 year old castle on the hill.  Only one watchtower is still standing and we found out that this tower was rebuilt from the rubble in the 1950’s. Apparently the Nazis were using the beautiful castle as a storage depot so the Allies bombed it to smithereens, killing several local citizens in the process. Oops.  It’s a good thing I’m Mexican. 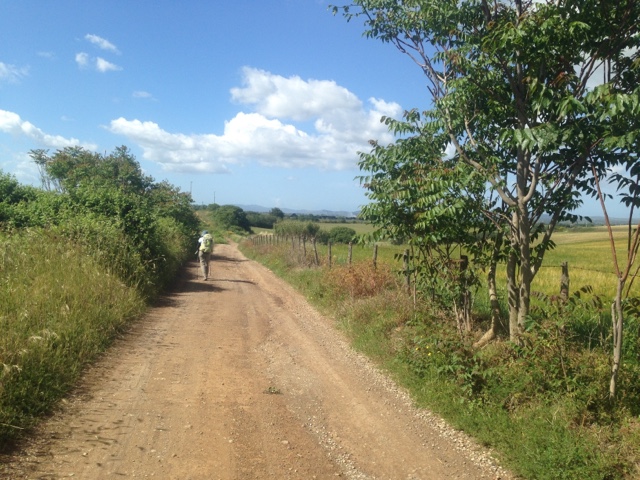 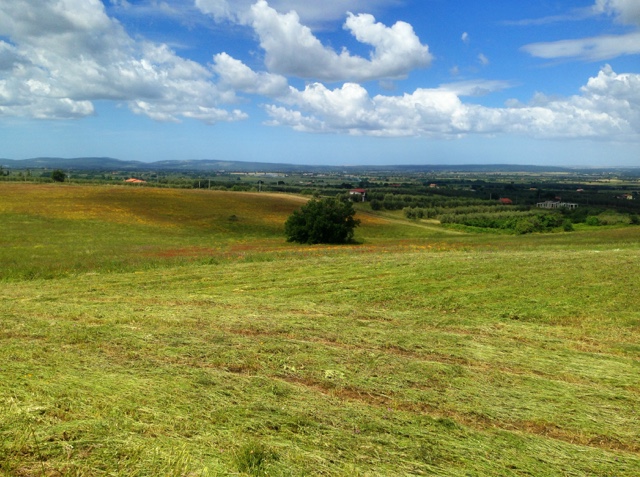 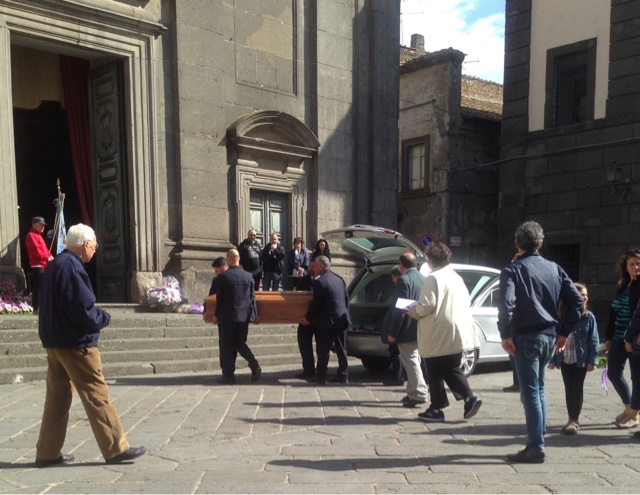 RIP Dina Camilli.  You were a good woman.