Skip to primary content
Today was supposed to be a tough day, we were warned by the guidebook, the hospitalera and fellow pilgrims.  Not only were there a couple of steep 300m climbs, there would be a lot of shorter steep ascents and descents.  Also, we were warned that walking on Sunday, there would be no place to have any breakfast in town and the only stop available on the trail only opened at 10:00am and would be to close to the start to be useful.  So we packed some food for breakfast and lunch from the grocer last night and loaded up on lots of water before leaving. 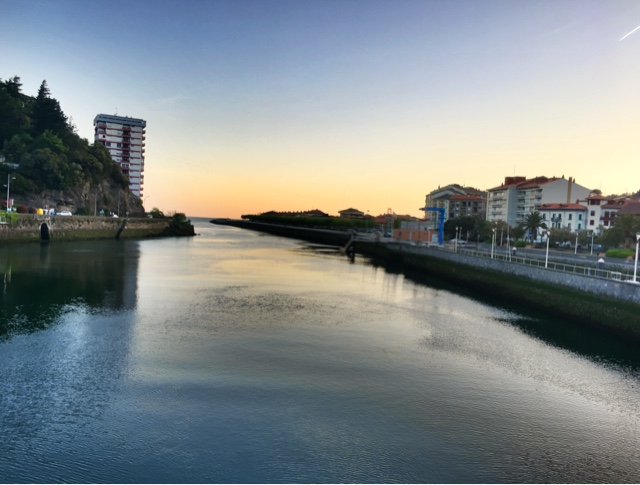 Crossing the bridge in Deba’s dawn

At 7:00am, we walked out of the albergue and the café cross the greet was doing a roaring business with pilgrims!  After coffee and croissants, we got to walking the first of the steep climbs out of town.  It was very slow moving for us.  So slow, in fact that by the time we got to the restaurant “too close to be useful”, it was 10:00am and opening.  After some juice and a sausage sandwich, I wondered what I was carrying all the groceries for!  We passed at least one other place we could have gotten some else to eat but didn’t. 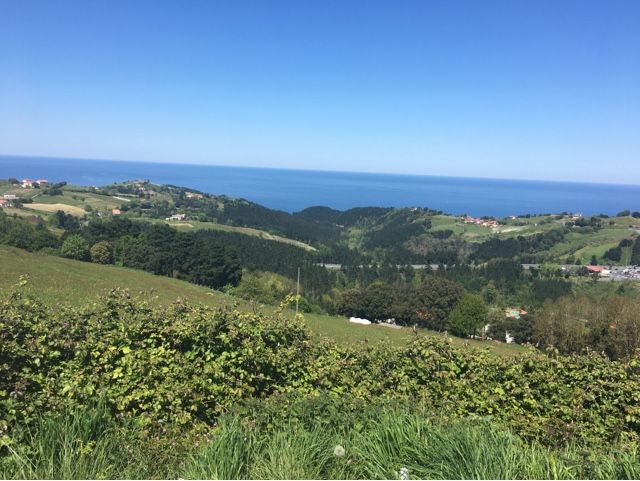 It was terribly sunny and hot today but for some reason, we did not find it as hard as yesterday.  I did get pretty burnt though and I’ve rub some skin off places on my feet.  I need to be more careful. 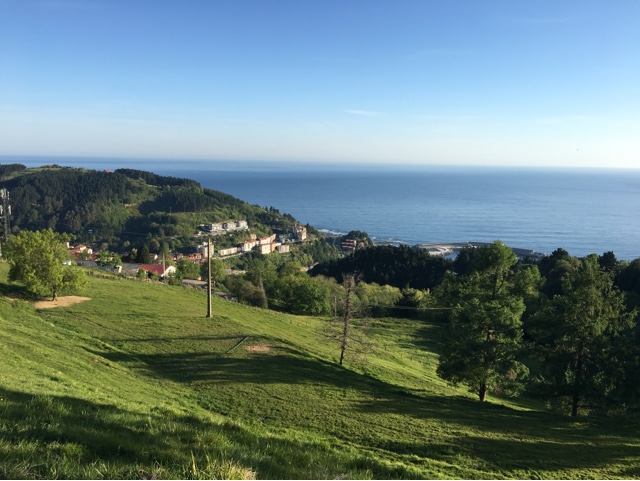 Several pilgrims were talking about shortcuts that their guidebook mentioned but it sounded like the savings in mileage was more than offset by additional climbs and descents.  We definitively didn’t plan on doing these but there was one place, just shy of today’s 500m high point where the official trail has been redirected.  It didn’t appear to shorten the walk much and added a 100m drop and climb but the trail was mostly shady and nice.  It was also well marked which was much appreciated when we are not able to double check with GPS.  I should also note for anyone following us that the entire trail so far has been very well marked, despite yesterday’s hiccups. 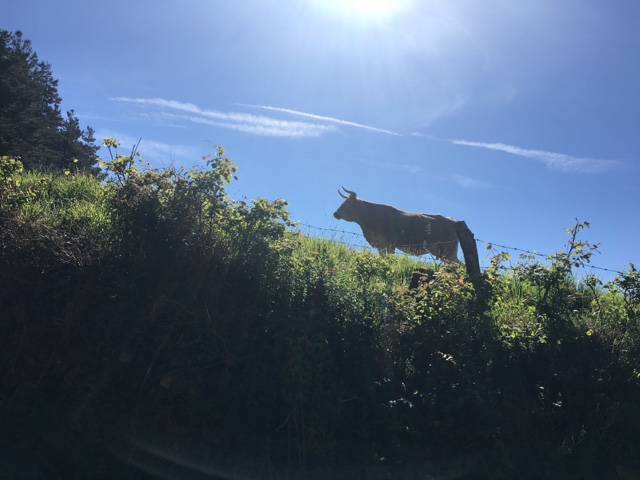 We had a pilgrim dinner last night with two other people who both have to be mentioned here.  First Jean-Claude, a Frenchman who is trying to walk this challenging Camino despite bad tendinitis in his legs and feet.  He had to cut short a previous Camino because of it but he followed all the doctor’s orders to get ready for this Camino.  It didn’t work though so he is moving very slowly and taking frequent breaks.  That is why he is important to Melanie and I because we use him as a pacer.  When we see him sitting trailside and resting, we walk faster to see if we can pass him.  When we sees us coming, he stands up and continues his slow Camino – getting further and further ahead of us out of sight until his next break.  We are so slow! 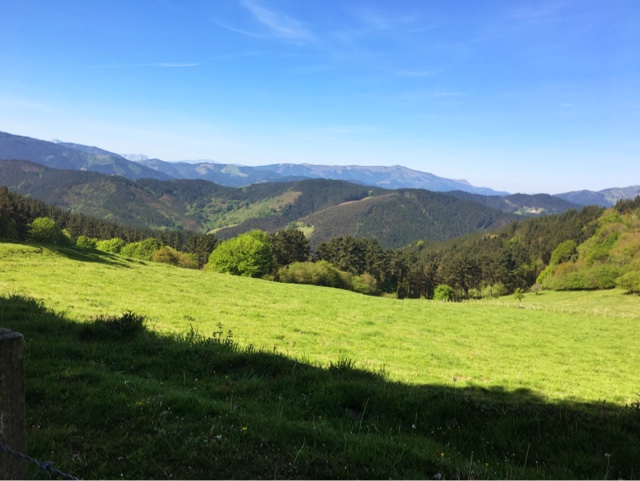 The second perigrina that we dined with is a young English woman named Harriet.  She has two super powers that impress me.  We met her on Day 2 and she mentioned that her Grandmother was from Spain.  Therefore, I was not surprised later when I heard her speaking darn good Spanish with Spaniards and not being told “I speak English” in return.  At dinner, she also translated for us and spoke to Jean-Claude in French.  When the German pilgrims at the next table asked her something, she spoke German with them.  I’m always impressed by people who speak two languages well so she is pretty high in my book.
I guess I was actually more impressed with Harriet’s other super power though.  Yesterday, with a late arrival in an albergue, with all the things we need to do before bed (shower, was and dry clothes, tend to injuries, eat dinner, send messages home, read up on tomorrow’s trail, etc), she and others also chose to go to mass as it was Saturday evening.  With that full schedule, she showed the patience of Job, translating for 45 minutes between the hospitalero and a couple of Americans who were having problems arranging bag transport and accommodations down the road.  Bless her heart, Harriet lasted 43 minutes longer than I could possibly have lasted. 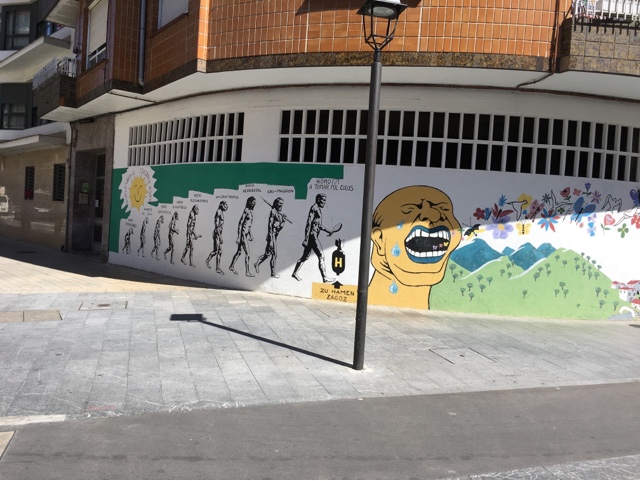 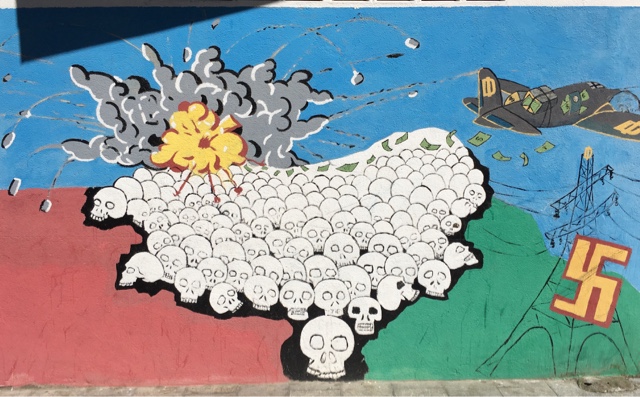 We don’t get to Guernika until tomorrow but they remember here.

One final not for anyone following us, as you enter the town of Markina, just after passing a church with some grotto shrine in the basement, someone has redirected the arrows away from the main donativo albergue.  I assume it leads to one of the two other albergues in town.  Feel free to stay at any of them but don’t get tricked into staying at one that you don’t want to.  The donativo albergue only has two showers for each men’s and women’s room and one in the men’s room, the door won’t shut but it’s okay.  I haven’t heard about the other places yet.  Maybe I’ll find out at dinner.
Peace y’all. 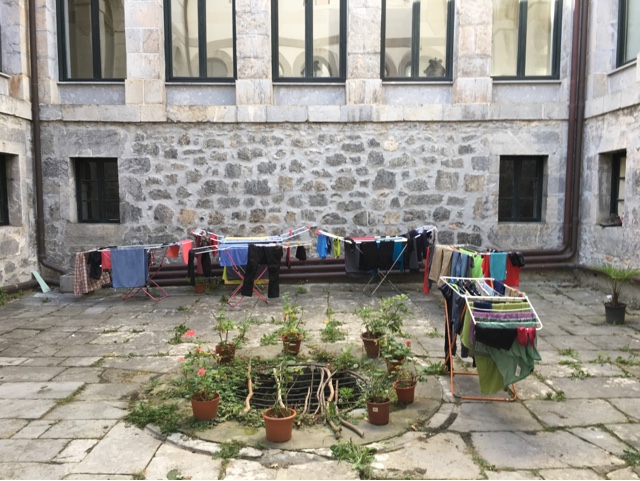 The drying room at the albergue.