Skip to primary content
Sunny and hot with lots of climbs and descents.  I’m sorry if this is sounding monotonous. Actually today’s walk was pretty nice, particularly the trails from the 15th century  monastery at Ziortza to Munitibar and scattered other sections which all had some great shade trees, packed dirt or gravel paths and a fair amount of even ground.  That’s what I love. 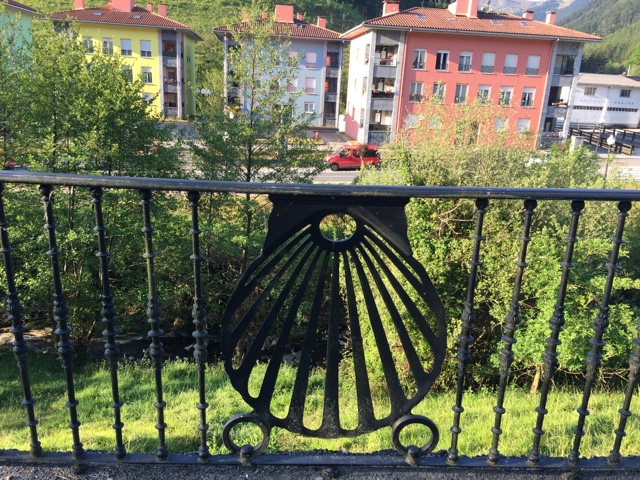 The fence near Bolibar has integrated the Santiago shell symbol.
The descent to Munitibar has recently been upgraded with wooden and faux-wood stairs over the old beaten path.  Rarely do I like seeing that but in this case, I thought it was a great idea.  The old path was so worn, pilgrims had to go down the very steep  rocky grade wedged narrowly in between the earthen sides of the path.  If it was wet, it would have been a river bed.  That said, when we got to the bottom, a lovely Spanish woman, who filled our water bottles, also told us that a perigrina fell on the stairs yesterday and broke her leg.  I still think the stairs were an improvement but the poor woman probably doesn’t. 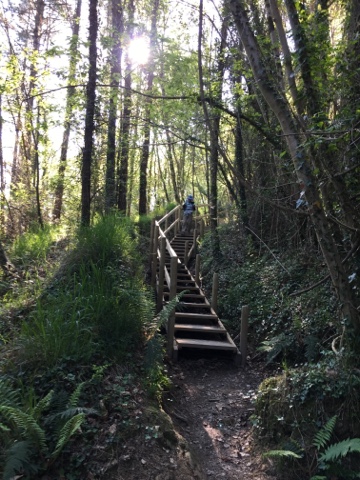 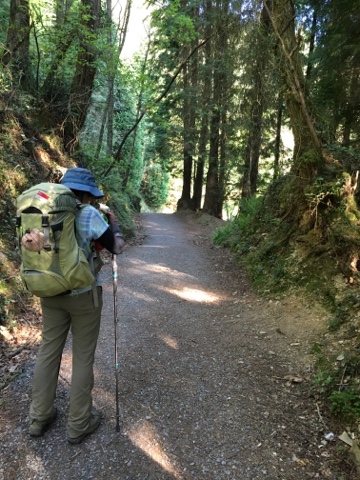 Before reaching Munitibar, we also passed through the little hamlet of Bolibar, which is famous for being the ancestral home of Simón Bolívar, the great South American liberator.  The townsfolk here take great pride in Simón as they have a museum, a statue and large monument to him in the 10-house hamlet. 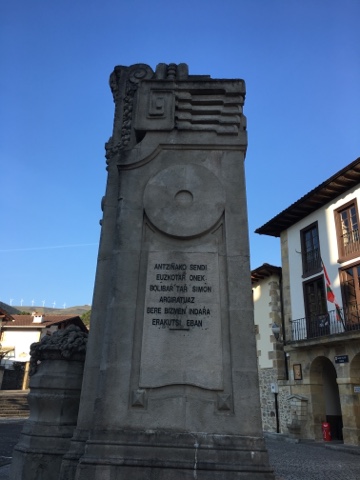 A Simón Bolívar monument in Bolibar
The problem with both Bolibar and Munitibar was that when Melanie saw the signs announcing the upcoming towns, she only could focus on the “bar” part.  It’s not that Melanie has suddenly become an alcoholic but bars are where you can get coffee, juice, pastries, sandwiches, etc.  Boli Bar was a major disappointment for her but Muniti Bar actually had a great place on the main square where it seemed every pilgrim in front of us was still enjoying their food and drinks when we arrived and every one behind us stopped by too.  The food was fantastic and the friendly woman manning the counter was a delight to deal with.  (If anyone is interested, “ibar” in the Basque language means “valley”.  Just don’t tell Melanie.) 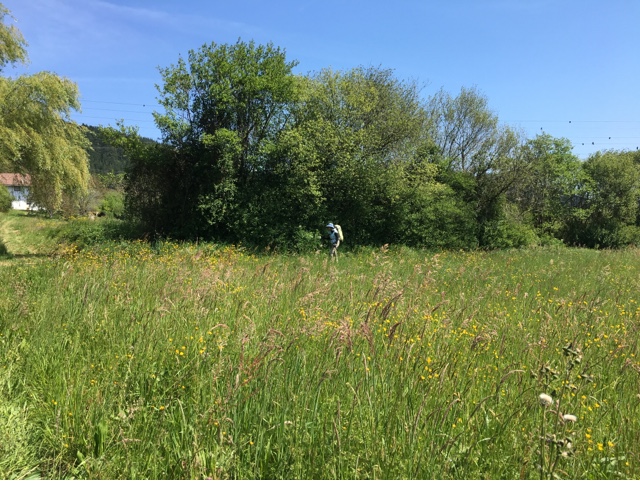 We are currently in Gernika, staying at the Hotel Boliña.  After two nights in albergues, we are thrilled for the privacy and peace.  We enjoyed staying in albergues almost every night during our first Camino but now we usually prefer a more restful night, if possible.  The youth hostal here is 18€ per person so we only pay 14€ more than that (50€) for the privilege of not queuing for a shower, being able to step out of the shower naked, using a clean towel, not rushing to wash our clothes before all the clotheslines are taken, a warm bed, no snoring, no one shushing me at 9:00pm when I am whispering, no dealing with the same people noisily waking up at 5:00am to leave the albergue… I could go on but you get the point, I think.  By the way, for those following us, the pilgrim albergue is donativo.  I saw people last night leaving 5€.  We left 10€ and in Gernika we would probably leave more because of the market.  Some people reckon that because of our hotel / pensión stays that we are on a walking holiday rather than a pilgrimage.  I would argue with them if I really cared about educating them.  Pilgrimages really do allow a good night’s sleep. 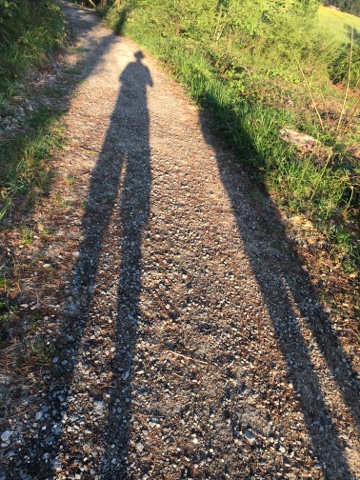 Always heading west in the mornings, our old friends.

Another thing about Gernika is that Wednesday happens to be the 80th anniversary of the Nazis bombing the town.  Many German and Japanese journalists have already taken almost all of the rooms in the few pensións and hotels available.  If you happen to be coming through in the next few days, reservations are a must and the albergues may end up fuller than normal. 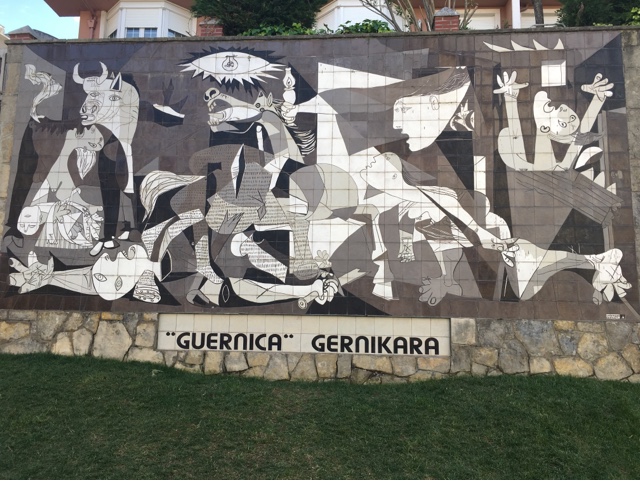 A reproduction of Picasso’s famous mural.
Medically, we are doing okay, as well as we would expect to.  I can count five places on my feet where the skin has been rubbed raw.  I don’t know how I bypassed the blister stage but in a sense, it’s probably better that I don’t have to protect a bulging blister.  The raw skin is easier to cover and it doesn’t hurt that much to walk on.  My right shoulder is also showing signs of wear so I need to adjust my backpack.  Melanie’s bad knee hurts whenever she is going up or down, which is about 98% of the time so far.  She also wins the prize for the biggest toe blister ever seen by man.  I’m thinking of cutting a hole in her shoe under the (not so) little toe to allow it space to grow.  Other than that, we are getting stronger and faster every day.  For the first time on this Camino, we actually passed a walking pilgrim today!  It’s okay that he is about 80 years old but it’s progress for us.  I think only about five pilgrims passed us and we passed about ten pilgrims who were resting and they didn’t pass us again. 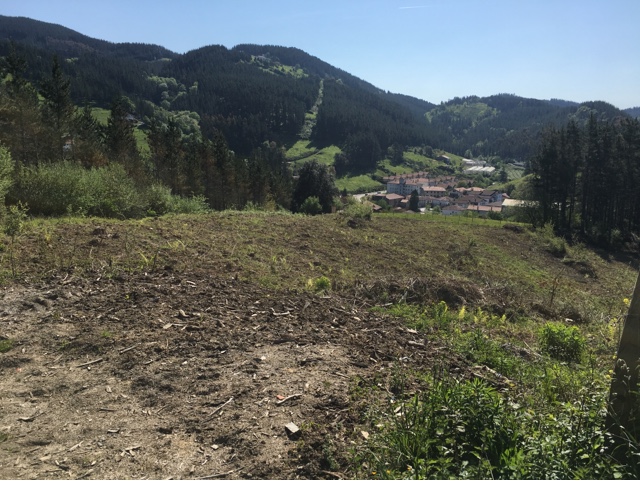 Another note for those following us, there is a automatic laundromat across the street from the hotel.  We are about 700m away from the albergue but if you want to get everything really clean, it’s a bargain.  It’s open until 9:00pm and you can hang out in the bar while you wait.  I know that hand washing some of your clothes (and never washing other pieces!) is part of a “real” pilgrimage but I don’t like to stink at least one day a week.
Peace y’all. 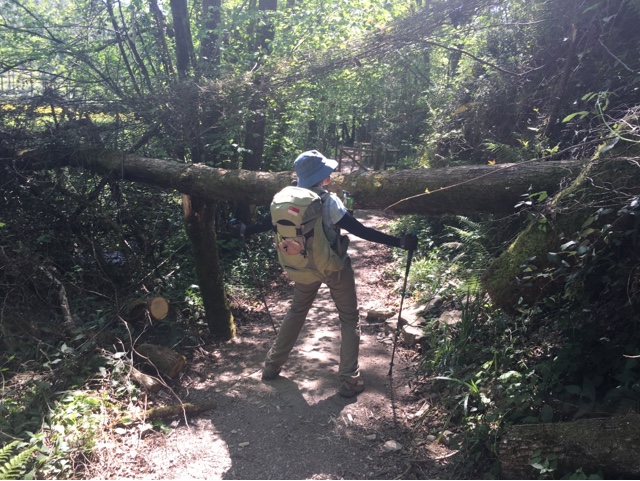 Can you imagine how tough limbo dancing is with a backpack? 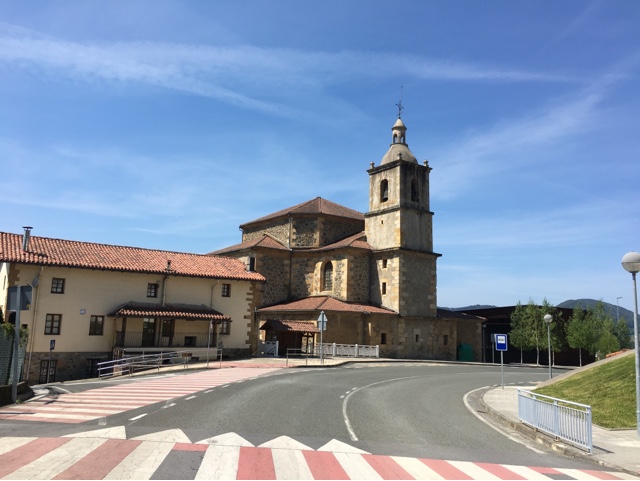 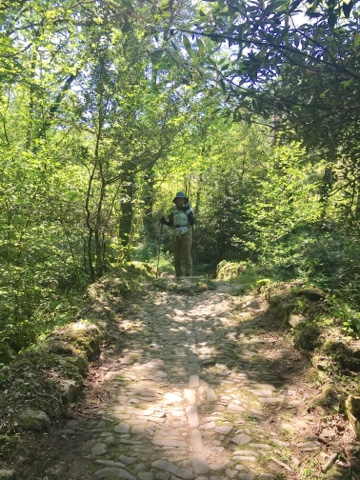 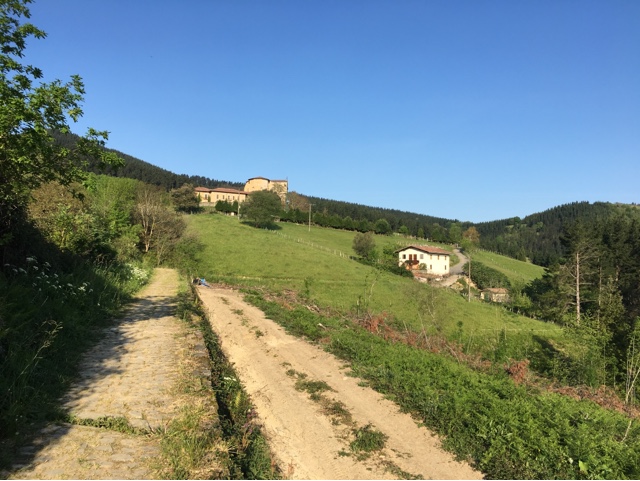