Skip to primary content
I actually have no idea how far we walked today.  We definitely took some “variants” but every step we walked, we were following yellow arrows as well as the rest of the various shell symbols, red and white blazes, etc. I’m using the Gronze site’s distance and sticking with that.
It was raining most of last night so we feared muddy tracks but we didn’t have too much difficulty with that.  When we walked out of the overly comfortable agroturismo at 7:10am, it was just drizzling.  Did I mention that the agroturismo had underfloor heating?  Just saying.  Also, the early drizzle was the highlight of today’s weather as we had light rain all day long, with some heavier rain thrown in for luck just before noon in Bilbao. It was a cold 8 degrees Celsius and the wetness made it feel colder. 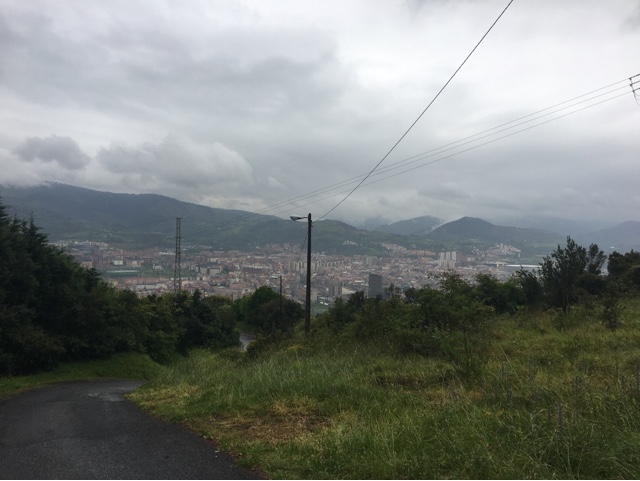 We started today with a 300m climb to Mount Iturritxualde.  It was not difficult, other than trying to remember how to spell it.  The trail was half on tarmac trails or road and half on muddy, rocky trails.  At the summit, you could look down on Bilbao, 370m below and we descended through a park on a trail that was supposed to be an important supply line trail during the Spanish Civil War. 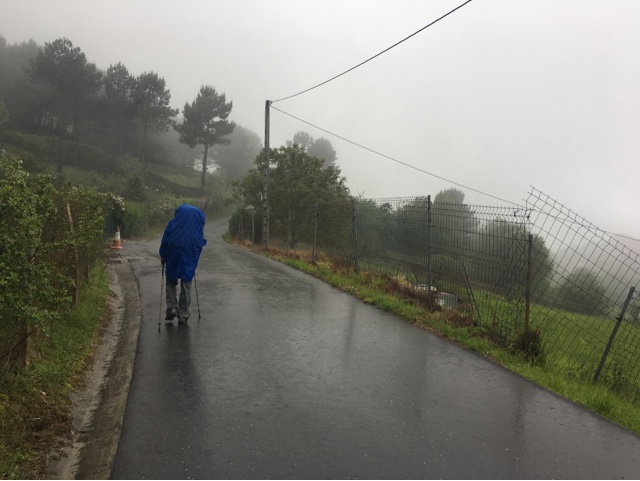 Just after the bottom of the park, there was a highway where we needed to cross on an overhead bridge.  The day REALLY got interesting at this point.  While walking down the ramp on the side nearer to Bilbao, I met a man with a backpack coming the other way.  As I often do, I jokingly said in Spanish, “No, Santiago is that way!”, pointing west.  Usually, this gets a chuckle at least, or possibly an explanation where the backpacker is really going.  With the guy on the ramp though, he looked too serious and asked in English what I had said.  I started to explain my joke (never a good thing) but then realised, he WAS going to Santiago!  After a few rounds of “Are you sure?”  and “Yes, I am sure”, I got him to turn around.  The poor guy was on his first day, walking from Bilbao to Santiago and he was following the stylised shell markers on the ground the wrong way.  It was about 10:00am at the time so he must have walked a couple of hours and climbed about 300m when we saw him.  He explained that he had only seen the shell markers on the ground (pictured below) and found them hard to follow. He had not seen any yellow arrows because they were on the opposite sides of the posts / trees / signs from where he was headed.  After several minutes of walking with him and teaching him how to follow the trail, I sent him off with my best wishes.  If anyone in France happens to see a guy with a blue jacket and red backpack wandering around, please put him on a westbound bus to Santiago! 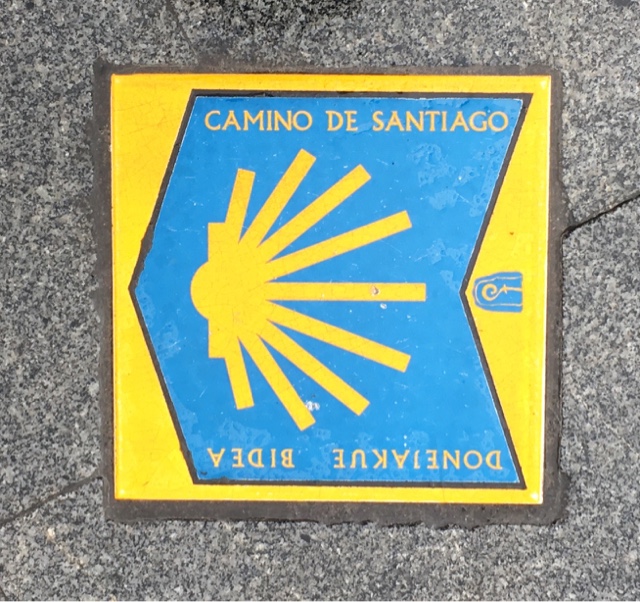 All roads lead to Santiago!

Walking through Bilbao, I found the markings fairly easy to follow – or so I thought.  It does take experience in the cities but we always could see one marker to the next, or we were sent down a street with only one possible exit at the other end and the next marker was there.  I kept looking for San Memés where we stayed on our first day in Spain because we saw arrows that went past our hotel there.  Strangely, we passed by that area several hundred meters away, always following arrows.  Was there a different route? 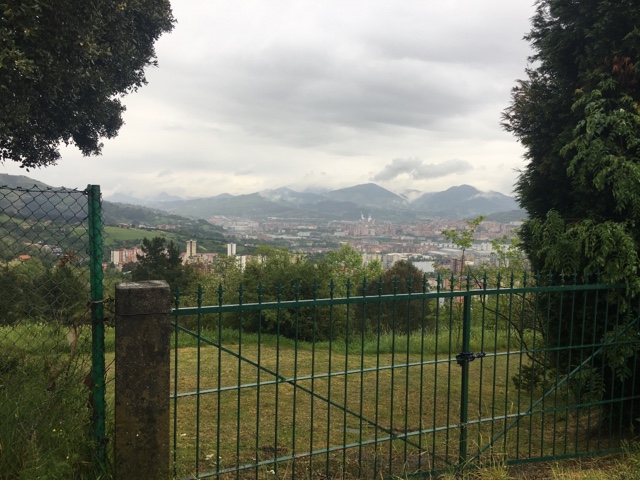 By the time we could get under cover, pulled out the phone to check the GPS, we realised that we were well past the place we were supposed to exit the city per the GPS tracks from the guidebook.  We were on the west side of the river, following some old route, not even the published “river variant” that is on the east side of the river.  We followed that old route, with arrows all the way to through Barakaldo to Portugalete.  In the rain, it might have been the better choice anyway, as I believe the “official” route would have more hills and mud. 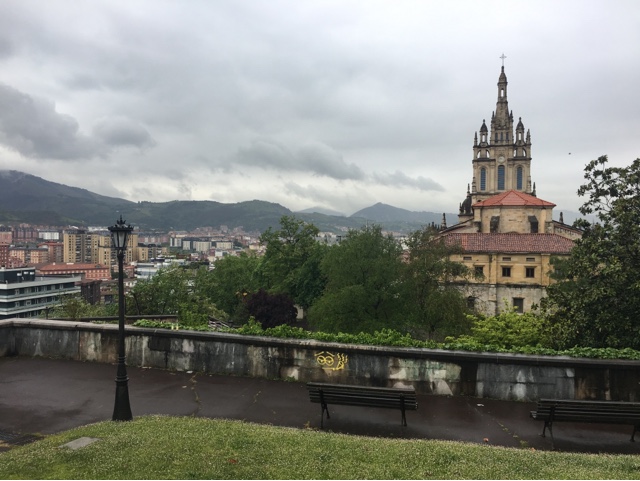 In Bilbao, we needed to do an errand inside a bank.  We don’t often get near a bank while walking because we arrive in towns after they close and the smaller villages we pass through earlier in the day, they don’t have banks.  With Bilbao scheduled to be passed early today, this was the best chance to get inside a bank.  If you are following us, whatever you do, if you change money in your home country, do NOT expect to be able to use a 500€ note in any bar, restaurant, albergue, pensión or hotel.  Getting it changed to smaller notes in a Spanish bank isn’t much easier.  The first one we tried, just to get inside, I had to take off my backpack and raincoat and leave them and my walking sticks with Melanie in the covered ATM area, outside the locked entrance.  Sadly, the queue was too long and the woman in front was arguing with the only teller.  I gave up, re-dressed and started walking again.  We tried a Western Union style place because of the lack of need to strip myself of any bombs to get me in the door but the only teller was taking forever with two customers, while also talking on the phone.  He asked me, by gesturing, what I wanted to do, but I hesitated shouting out that I needed change for a 500€ note.  It wasn’t a great neighbourhood.  Finally, the next bank – after I stripped again – gave me change.  The teller said that they aren’t allowed to change money for non-customers but he made an exception for this no-longer poor pilgrim.  Yeah!  I can keep paying for my meals and lodging!  After a quick lunch in a nearby bar (yes, the gear had to come off and put back on again) we got back on the arrow hunt.
Again, I found the trail between Bilbao and Portulagete to be excellent but we may be the only pilgrims to follow those arrows in the past several years.  Maybe I should write a guidebook on that route.  The highlights included some artistic and clever graffiti, a long abandoned road and a deserted quay. 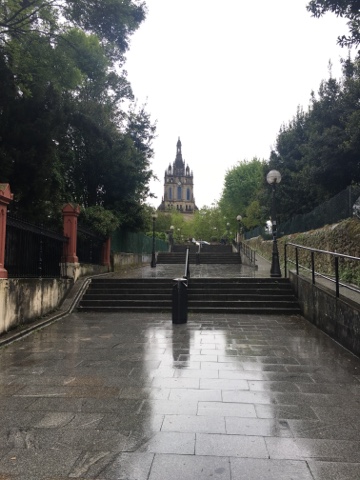 We are staying in the Pensión Bellmar and it is everything that booking.com reviewers said and more.  It’s an upmarket dump but we have stayed in worse.  The walls between the rooms are wallpaper.  Notice how I didn’t say “wallpapered”?  I can hear people farting three rooms down the hall.  The king-sized bed is two single beds pushed together (which is fairly common) but these two beds are different heights! If I roll over to snuggle Melanie for warmth, I’ll fall about three inches!  They have wi-fi but the router is in the lobby and has a range of two meters.  There are five of us now with iPads or iPhones hovering over the reception desk.  I have a built-in bedside table on my side of the bed that extends eight inches over the bed.  My pillow partially rests on it.  I just know that I’ll wake up with a black eye.  It’s cheap though so we just laugh and move on.
I’m sorry for the lack of a single decent photo today but my iPhone isn’t waterproof.  Peace Y’all.