Skip to primary content
Today turned out to be one of the sunny and hot varieties but it wasn’t too bad.  We had a great walk today although more than 90% was on roads, mostly very quiet rural roads.  For a great portion of the day, we were even on dedicated walking paths next to the roads which is nicer than being on the shoulder or the road itself. 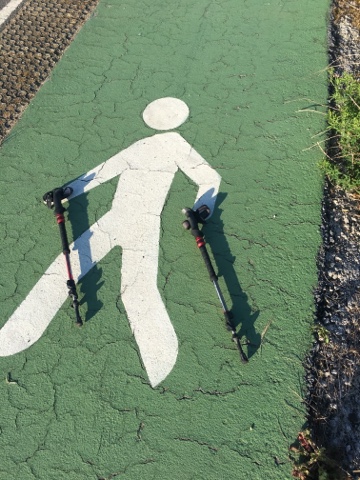 We started out without breakfast as the hotel is strictly on Spanish time.  As soon as we left the hotel, we could see Jean-Claude up ahead of us by about 100m on a very long, straight, flat shady road out of town.  It may have taken us 2km to catch him but eventually we did.  We were so proud of ourselves! 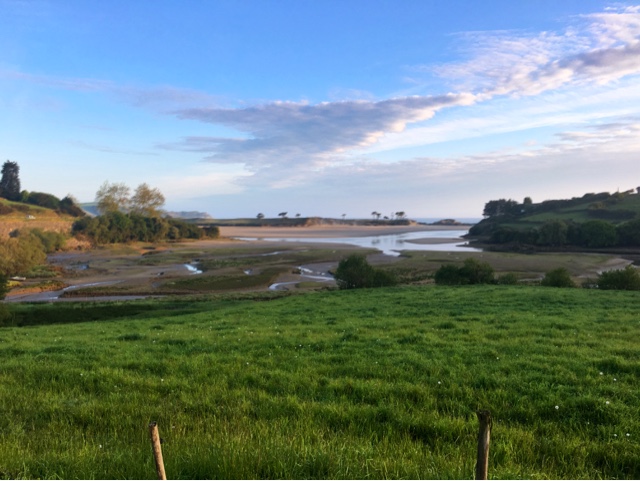 For those following us, after that first 2km and crossing the bridge over the Bichurichas River, the new Camino trail does a loop toward the beach and stays north of the CA-131 the whole way to the bridge to St. Vincent de la Barquera, rather than looping south of the CA-131.  It makes the day’s total about 1km longer than the Gronze site says.  For the most part, it runs along side the quiet CA-236.  When I say “quiet”, I don’t just mean that there are few cars on that road, I also mean that the very few cafés or bars near that road were closed as we passed.  The first place to get the first coffee of the day was not until San Vincente, almost 13km from where we started.  How Melanie did that without killing me, I’ll never know. 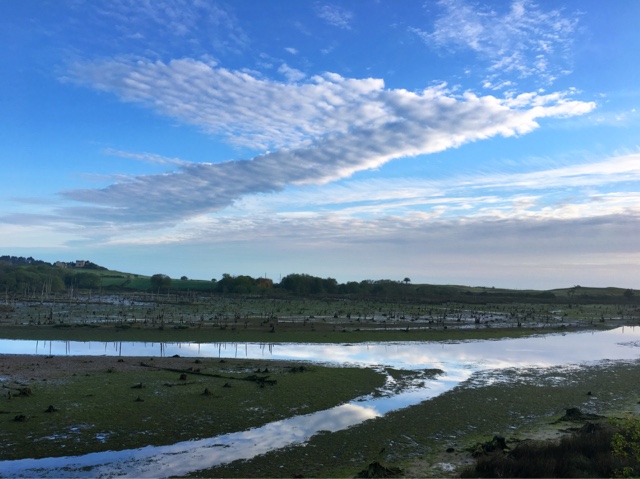 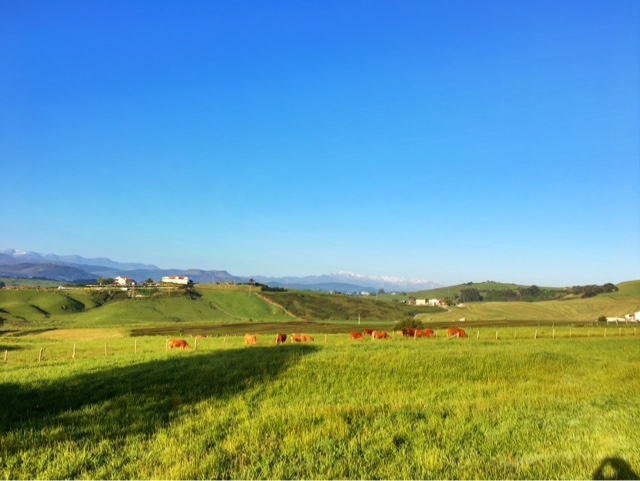 At the closest café to the bridge into San Vincente is where we finally got to stop for breakfast. If you are following us, go to the same café, wave to the guy working there and keep walking.  Even Melanie’s tostada (toasted bread with butter on the side) was pretty bad.  How can you mess up toast?  Jean-Claude had earlier taken a detour onto the beach but he rejoined us for breakfast.  He regretted it too. When we left, Jean-Claude said he was going to visit the old church in town and then take the highway route the rest of the way.  I think he just didn’t want us to recommend any more places to eat. 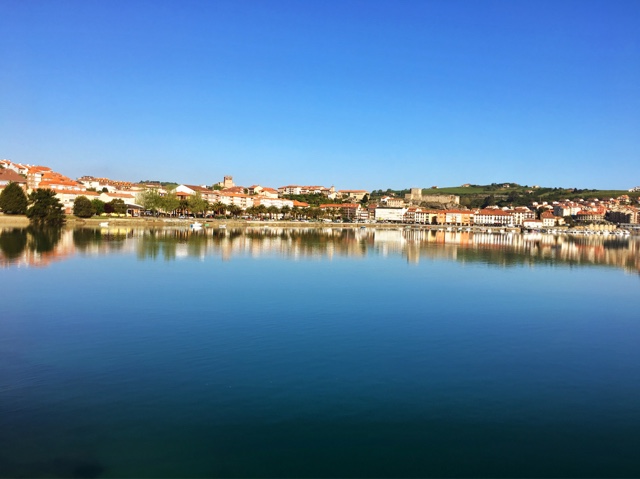 We went back to the bridge and followed the arrows up the steep hill directly opposite.  Strangely, the Camino does not actually go into the town of San Vincente de la Barquera.  From the hilltop though, you get a good view of the old fort and church.  If I had more energy and wasn’t worried about the long day, I would have done a little sightseeing.  It would have been about a 2km round trip to the best places but I wasn’t sure I wanted to add that to the day today. 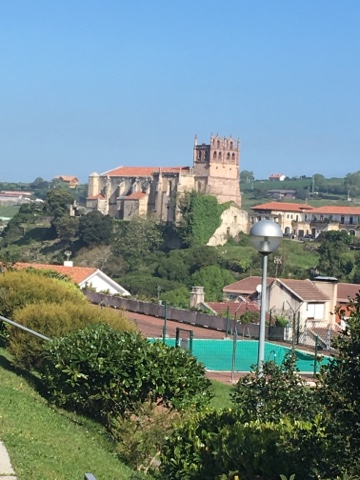 After the climb along side of that town, we dropped down a bit and crossed over the A-8 highway.  At this point, we needed to go around a mountain and I accidentally chose to go counter-clockwise, rather than clockwise.  What was the difference? It was almost the same distance but my route only included a 37m climb.  The other way, I was not sure.  After walking to the other side, I realised that I just skipped the only off-road trails of the first 25km of today’s walk!  We also met some pilgrims when we rejoined the route on the other side and received the disapproving looks for “shortcutting”.  Oh well. 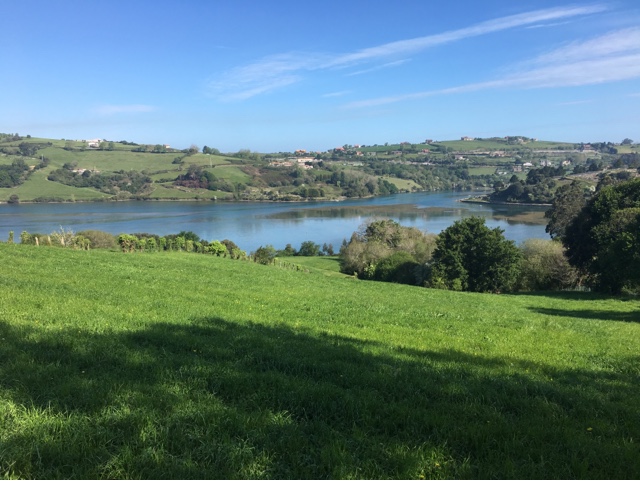 Throughout the walk from San Vincente almost to Muñorrodero, we saw the additional signs of the Camino Lebaniego.  Anyone doing the Norte later this year who still has flexibility, who wants a challenge and is adventurous, consider this five day (~115km round trip) detour that many pilgrims of a millennium ago included in their Camino to Santiago.  From today’s route, you would leave the Norte near the town of Muñorrodero and head south on the Camino Lebaniego to the Monasrrerio Santo Toribio de Liébana.  It is here where it is believed the largest surviving piece of the True Cross is kept.  This is a Holy Year for that pilgrimage and the destination was as important to pilgrims of old as Santiago de Compostela, Rome and Jerusalem.  Google (and possibly Gronze) will be your friend with this one but if you do go because you saw this post, please say a prayer at the Monastery for my special intention. 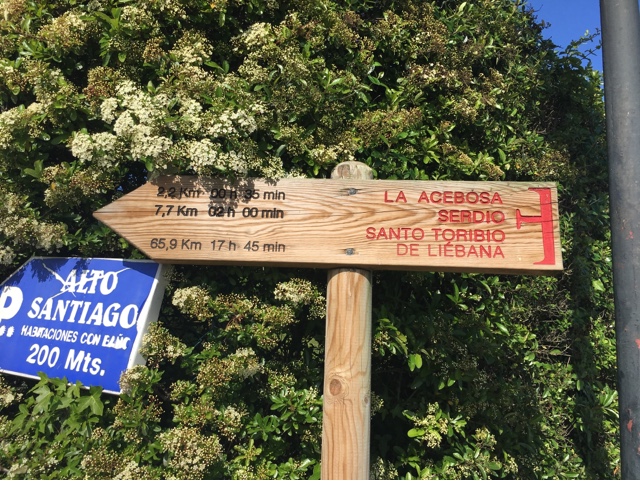 A bit before Muñorrodero, it was my turn to give a disapproving look at short cutters, even though I didn’t.  There is one 400m detour in the Camino to have us go past the 14th century watch tower of Estrada.  Two pilgrims had just caught up to us just before the Tower.  They had just enough time to say “Buen Camino” before laughing at the arrow and turning onto the road bypassing the tower.  Wow!  At least we are sneaky when we cheat. (Where is that “tongue in cheek” smilie when you need it?). We caught up to them in Serdio in the nice bar there – only our second bar / pee break of the day and it was already afternoon! 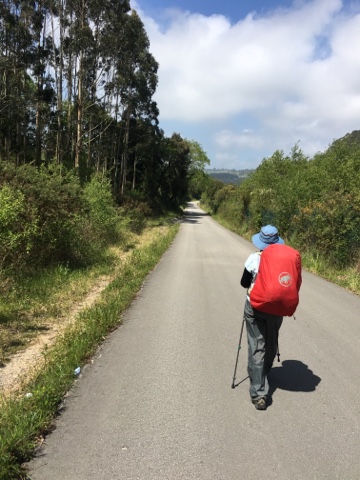 The next section was just negotiating our way past the many highways congregating at Pesués.  To leave that town, however, for the final stretch today, we then finally hit a dirt track down to the railway and near the tracks on the nicest section of the day.  I swear the past few days have all been similar with the only off-road parts near the very end.  I am sure that is so when we sit in the bar, writing our blog, that’s the section we remember most and we write “We had a great walk today”.  Sneaky! 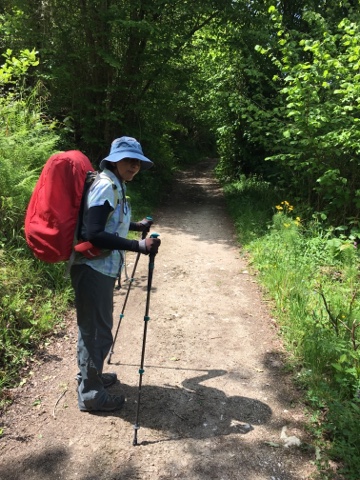 We stoped in Unquera because it had several bedding options although no albergue.  Our Hotel Río Deva is right on the river near the bridge and not to be confused with the Hotel Río Deva that is just to your left when you enter town near the train station. It is a nice boutique style place and only costs 40€ with breakfast for two.  That is the same cost as the hostal in Pesués and 10€ more than the albergue in Colombres.  Better still, there is an evening laundry service at the cleaners just across the street.  I’m very happy tonight and I’ll smell good tomorrow. 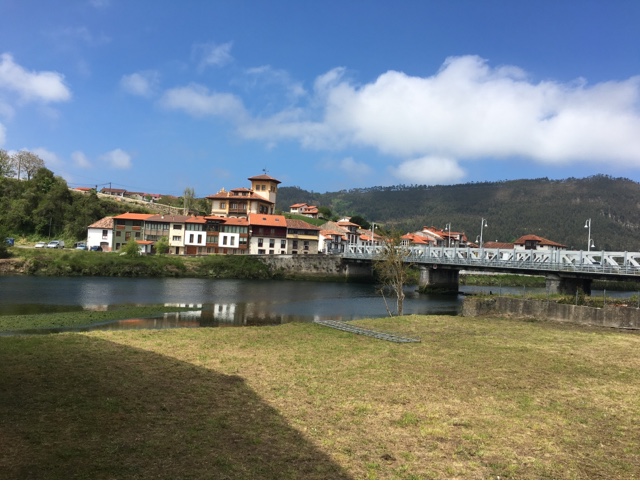 We have also restocked walking snacks in the market.  As an added bonus, we stocked up on Derma-Skin at the pharmacy.  This very hard to find product is the best protection against and treatment for blisters in the world.  Europeans swear by Compeed but Derma-Skin is much better.  We almost hit the trifecta but the sports store didn’t sell a decent ball cap.  They did have a great supply of Altus products though, for those following us. 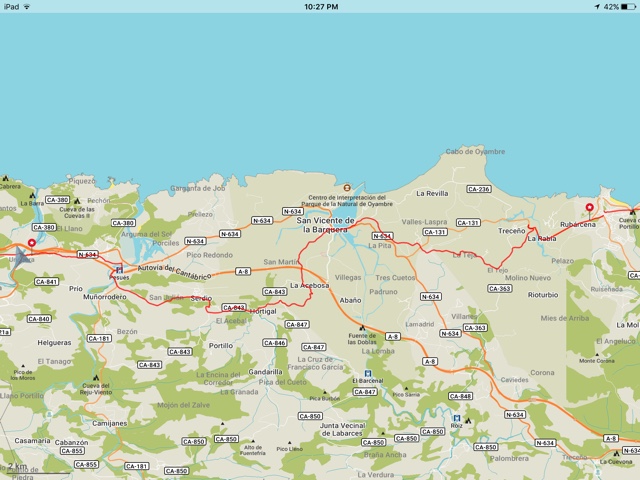 I have forgotten to mention two things about photos on the blog.  First, I am finding it very difficult to add captions without crashing the program and losing my work.  My apologies but I am at least trying to add something about the non-self explanatory ones.  Also, we are getting closer to the Picos de Europa mountain range.  I’ve been trying to get pictures of these snow-covered mountains for several days but they haven’t really turned out yet.  Snow against a hazy sky just doesn’t have enough contrast.
Tonight is our last night’s sleep in Contabria.  Tomorrow we cross the bridge into the autonomous region of Asturias.  We have covered two whole regions in two weeks.  Less than three weeks to go.  Peace Y’all.