Skip to primary content
Last night, we explored the town of Santillana, including its old church.  The entire village was magical.  I love the buildings there and the people were petty nice too.  Due to the number of tourists and departing tourist busses, this was one place in Spain, other than on the Camino Frances, where it was easy to find restaurants serving dinner as early as 6:00pm.  Just so we blended in with the locals a little, we at least waited until 7:30pm before begging for food.  We even ran into Jean-Claude in the restaurant and had a lovely meal with him.  In case you are wondering, Melanie and I both had paella as a first course, she had Iberian pork cheek (carrillada) and I had bacalao (cod) as our second course.  For dessert, it was ice cream and traditional Cantabrian cake.  I love carbo loading on Caminos!  By the way, we found out during dinner that noted French philosopher, Jean-Paul Sartre, thought that Santillana del Mar was the most beautiful village in all of Spain.  That got me thinking. 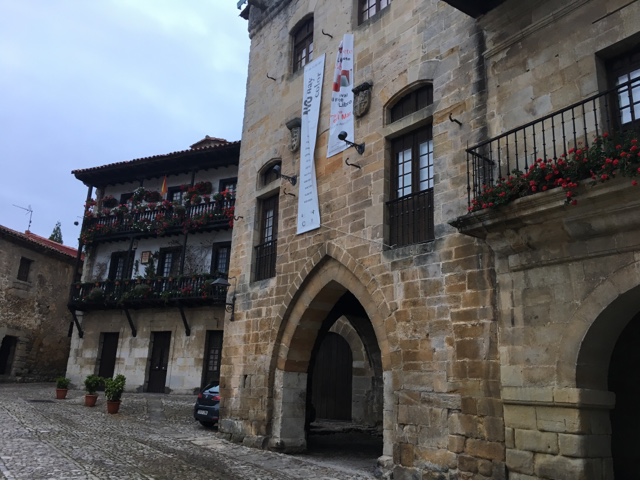 Our sleep in the palace was decadent.  The fluff in the duvet alone made 3,500 eider ducks go naked for a year.  The pillows hugged my head to sleep.  The wonderful folk at the Hotel Altamira even set up the entire buffet breakfast just for us at 7:00am, rather than the normal 8:00am, so we could get out the door early.  God bless them! 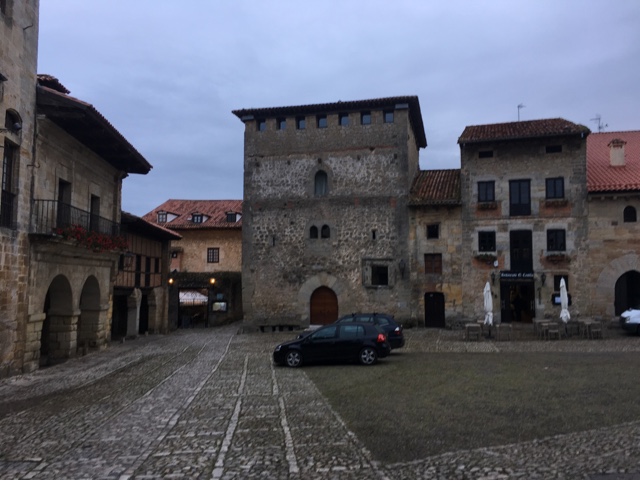 We were finally off and walking at 7:40am and just as we walked out the door we ran into Hannah and Lisbette.  They were looking for a café that was open.  Apparently, they tried to find a nice place last night to sleep just before town.  They could not find anything so they came into town and stayed at the albergue – which didn’t look all that inviting to me.  With most of the hotels in town costing 30 – 60€, I am not sure why they settled on the albergue. 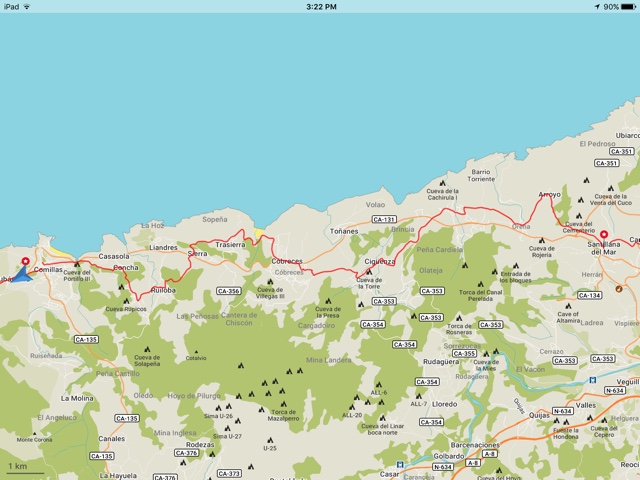 Most of today’s walk was hilly and on small country roads.  There was “up” and “down” but never really anything in between for any distance.  We had a little dirt path out of town but that only took us as far as the trunk road CA-137.  We then looped up into farm country for some views and cow spotting.  You won’t believe it but we stopped in a bar in Oreña at this point – about 4km into the walk – to have a soft drink and coffee.  It was more of a pee break though, so it didn’t take long.  After that, it was down into Los Barones for a walk past of the Ermita (hermitage) de San Bartolomé.  We then walked up and over the CA-131 heading to the Ermita do San Pantaleón, which I believe in English means Hermitage of St. Pants.  That doesn’t make sense to me but we’re in Spain so we deal with it. 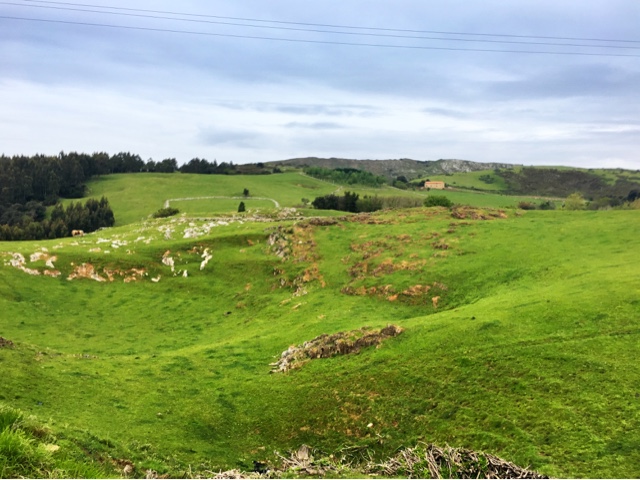 The hills and the threat of heavier rain continued all day.  We had spitting drizzle most of the morning but only a few brief times did I have to use my hood. 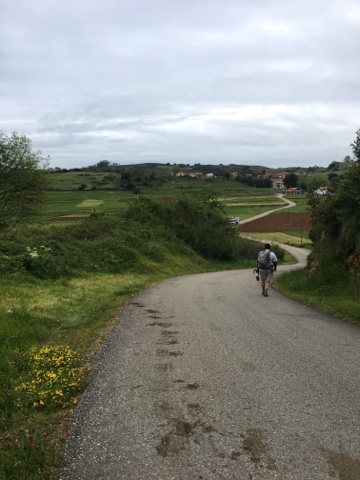 At one point in the morning, we met a young woman with the look of a pilgrim walking towards us.  Remembering the confusion caused with Wrong Way Hannes back in Bilbao, I just asked her if she was coming from Santiago. She replied that she was indeed returning after walking to Santiago.  She added that the route is just so peaceful that she had to walk back.  We were still 520km from Santiago.  I didn’t ask where her start and finishing points are but she has walked at least 1,040km so far.  Over the years, we have seen many of the two-way pilgrims.  Most of them returning looked a bit touched but not this woman.  She looked strong, joyful and at peace.  I’m impressed. 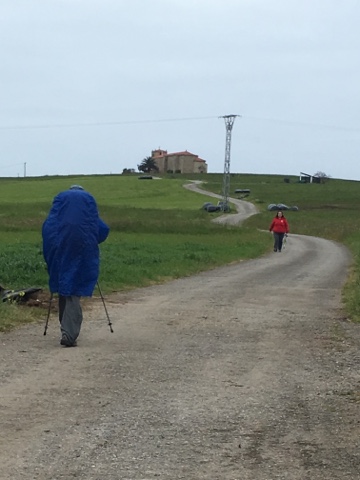 For those following us, just after the Albergue El Pino, near the town of Cóbreces, the arrows lead a different direction from the GPS routes that I got from the guidebook.  Follow the arrows as it it only a 1km diversion and the arrows seem to try to save us a 500m walk along the CA-131.  The arrowed route goes through Cóbreces, past some cool churches and a seminary as well as a pilgrim’s albergue.  We then had only a 100m walk along the CA-131 where we met a German woman who we had seen several times before.  She was having great difficulties with her foot so she was waiting for a bus to St. Vincente, 12km past Comillas. 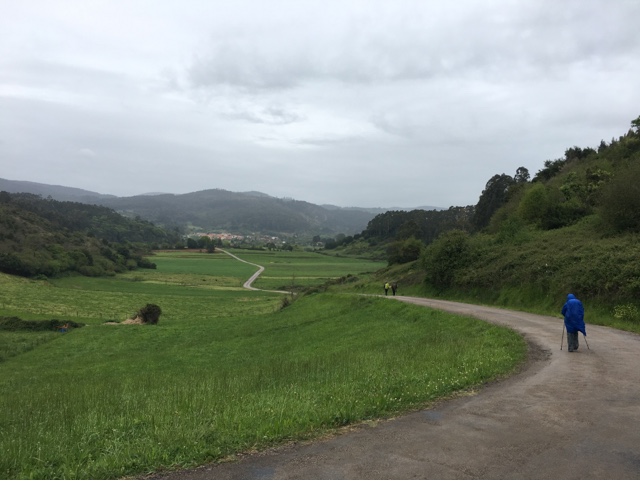 Again, for those following us, the next 5km is definitely a conundrum. We followed arrows on the north side of the CA-131 down a steep hill to the beach.  It was obvious that we were then going to immediately climb 150m or so to get up the next cliff.  I assumed it was to get us to see some beautiful beach or fantastic views.  Well, after doing it, I think the reason might have been to get us to the restaurant and / or the bar on opposites sides of the end of the road at the beach.  Okay, it was 11:30am by that time so we looked into the restaurant.  That place was empty, fancy and only served full lunches.  We then went to the bar and they didn’t have pinchos or any other food.  Huh?  We got out of there fast.  Actually, we got out of there slowly because after a short walk on a boardwalk, the hill steeply rose to 150m.  It did provide some nice views of the beach and town and it was an extremely quiet but I am not 100% convinced it was worth the sweat.  Then again, maybe it was worth it but we were biased because we had been disappointed about the food. 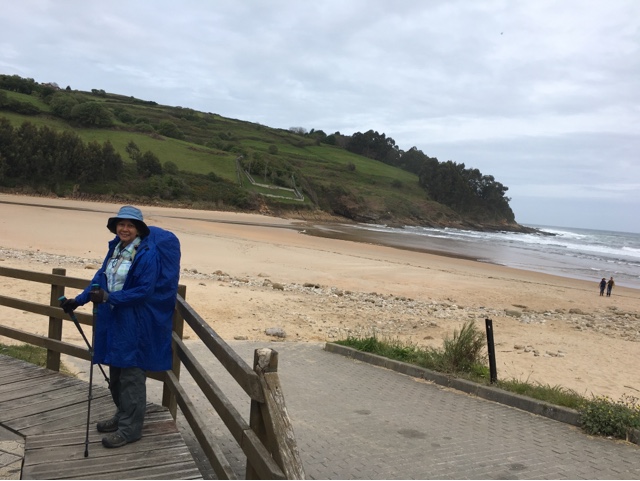 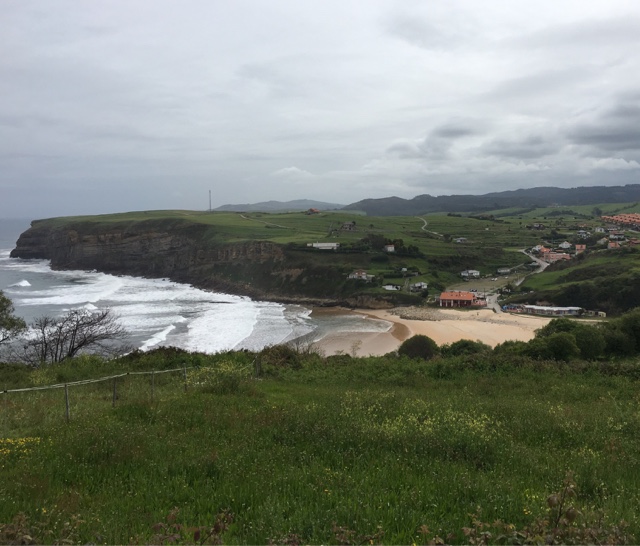 With the slow walk up the hill, working up our appetite the whole way, we saw a sign in the village of Trasierra that said a perigrino-friendly bar serving all kinds of good things was only 50m away.  It had the added benefit of being next to the Ermita de Santa Eulalia.  There are a lot of Ermitas in Spain.  The bar turned out to be a curse in disguise.  They had no pinchos for us to quickly eat and go and they had wi-fi which was my undoing.  We ordered sandwiches and soft drinks and waited a long time for them while we caught up on the news of the world.  One hour later – 45 minutes longer than our usually lunch break – we got back on the trail. After passing through the village of Sierra, with some cool, almost Nepalese-looking houses, we got to cross the CA-131 yet again.  When I was growing up, I knew that that every time we passed by a church, my mother would cross herself.  Now it seems, every time I pass an Ermita, I cross the CA-131.  At this point, we followed the advice of the prison warden back in Güemes, and got creative.  100m down the country road, we turned right onto a dirt path which headed west.  With another small section on a road, another dirt path and a small residential road, we caught back up to the official Camino at Concha.  It probably saved us 1km of walking but it also saved us from going past a second Ermita de San Pantaleón and the Ermita de San Roque. 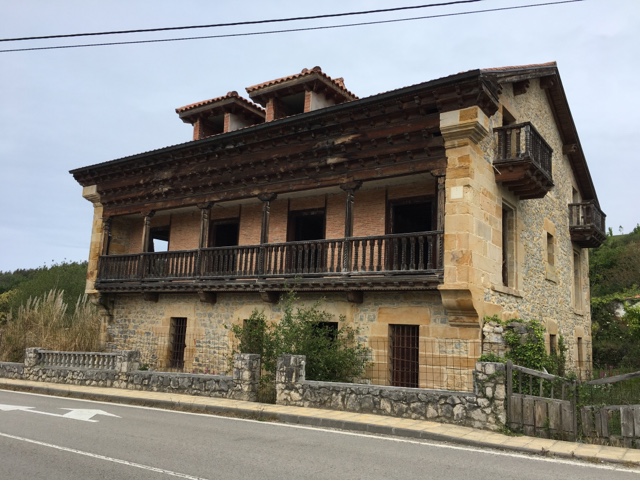 The rest of the walk into Comillas was unexciting.  We did cross close to one more small beach but there wasn’t a surfer or gale-force wind in sight.  We made the mistake of not really looking into the available accommodations in town.  It turned out that the town, a little like yesterday in Santillana, there were lots of very old buildings in the village.  It looked like a very cool place to hang out.  The one hotel that we did know the address of, the cost and the reviews on booking.com, was at the very end of town as you leave.  It’s a great hotel but we weren’t keen to walk the 500m back into town for dinner, which would have been nice.  There are closer restaurants but also out near the end of town, not the cool center.  If you are following us and you want to be away from the possible noise from the town’s center, Hotel Comillas is right on the Camino, only 50€ for a double and is otherwise excellent. 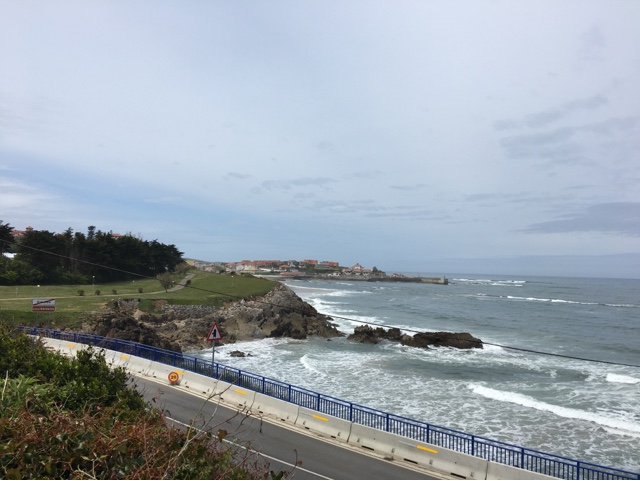 It’s time to rest up for tomorrow. Peace y’all. 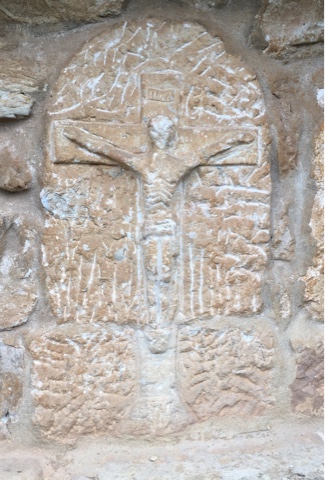 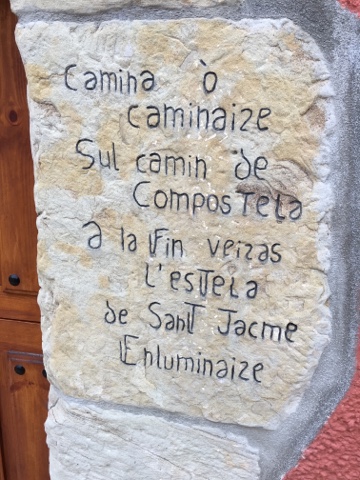 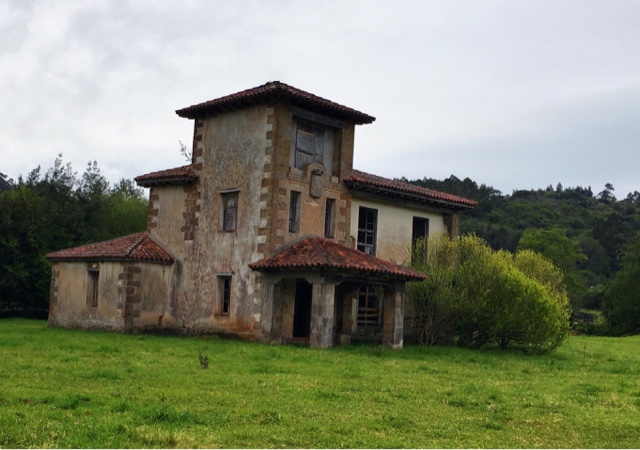 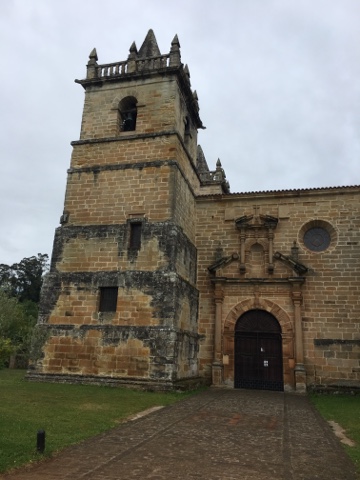