Skip to primary content
There’s gypsies in the palace!  I’ll be honest, I’ve never heard of Santillana del Mar before but what a gem.  We’re currently checked into our comfy room in a 16th century palace, for the princely sum of 54€ including breakfast but I figured it was worth the splurge because the hotel we were planning to stay in may have only been 38€ but it was built in 1965 and out of town.  The other reason was because Melanie refused to leave once we had a peek inside.  I’ll need to do some research on this village but it appears to be a medieval town whose buildings have survived all the wars.  With May Day tourists walking every which way here, it’s obvious to see that it’s a popular destination for Spaniards. 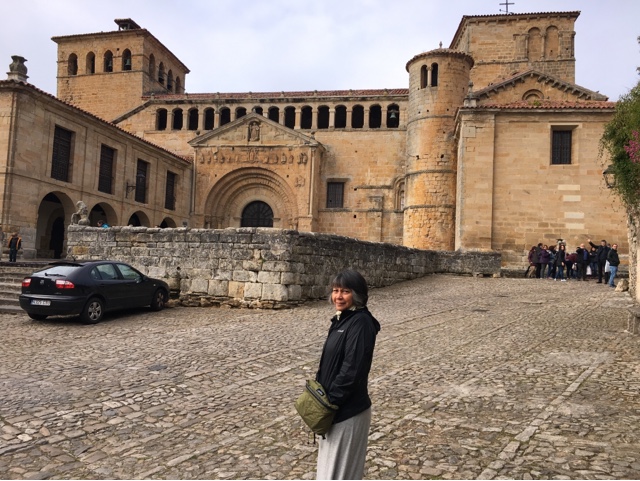 As far as the walk goes, the day started a little late and on a sad note.  As we were getting ready to walk out the door, I realised that my hat was missing.  This is the runner’s ball cap that I use under my rain hood.  It keeps the rain and the hood off my face.  I had just said to Melanie the other day that the hat was one of the few “perfect” pieces of gear I have.  Like athletes, when we find gear we like, we loyally stick to it, we take good care of it and we cherish it.  That’s the problem, I shouldn’t be cherishing a “thing” like a hat.  I should be cherishing friends and family much more.  Can I at least say that miss my hat already?  I’m pretty sure I left it on the counter at reception when I checked in yesterday, but I said my Baby Jesus Lost and Found prayer and we started walking. 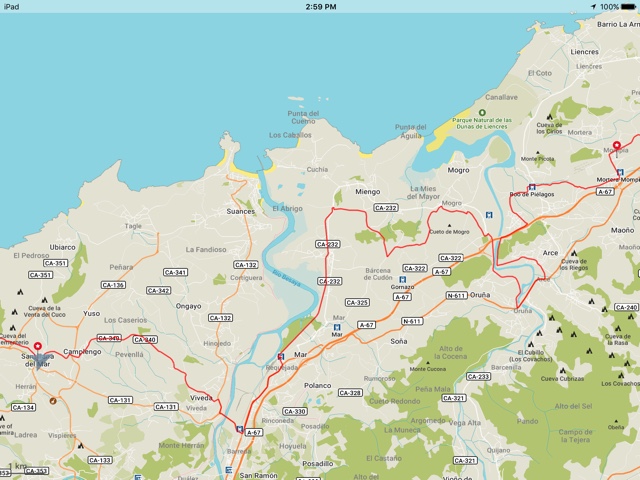 Today’s stage is in red from east to west.

Our first destination today was the Boo train station, 3km away.  On advice of counsel, and the local prison warden currently volunteering at the Güemes albergue, we took the train one station to Mogro, thus avoiding jail for crossing the railroad bridge by foot over the river.  The alternative a 3km detour and still risking jail time for walking on a highway bridge over the river.  The “suggested” route was an 8km detour to a bridge over the river further south.  All of that because there is no pilgrim friendly bridge over a silly little 100m wide section.  Lunacy.  The good thing about using this shortcut is that there is no way for a pilgrim to pay for the ticket!  We were told to pay on board but there was no one to pay.  Win!  (As always – and that’s a clue that we’ve done this before –  we will put the 3.30€ fare in the poor box at a local church). 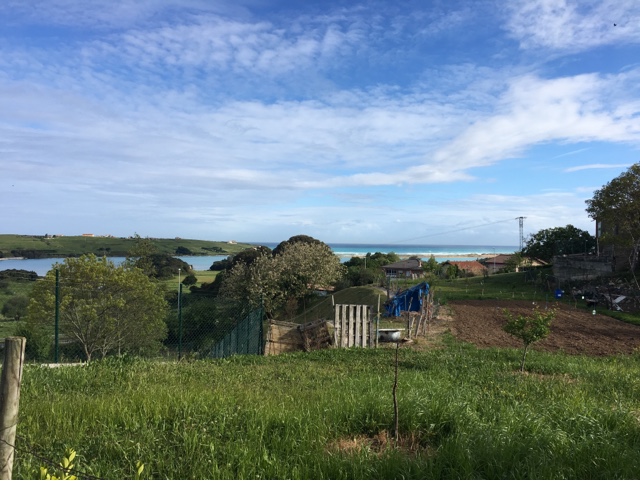 During a café stop at the Mogro train station – we hung around in case the police were looking for us – we looked at the map again.  The GPS route we had showed a strange path over the next 7km with equal parts on heading due north, then west, then south, then west, then north, then west, then south again.  There seemed to be no rhyme or reason to this except to get us to walk through certain villages or past certain bars.  We did the north, west, south, west bits but then took a bearing southwest “off trail” to catch up with what we think the official Camino is.  This short cut took saved us about 2km and took us from El Gallito through Bácena de Cudón, past the Ermita de San Miguel to the train station at Requejada.  I highly recommend this lovely route – which actually did have some yellow arrows and signs – as it was slightly hilly but had fantastic views all around.  The official route seemed to be along a flat course next to the river. 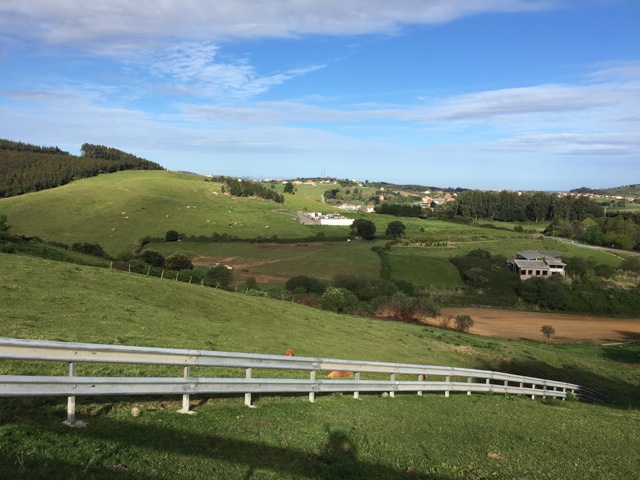 It was at the Requejada train station that we met up with Irish Marie O’Connor, Melanie’s friend from Güemes, German Gabby, who we had dinner with last night and Swiss Elizabeth.  We had stopped to look for a lost walking stick tip that got lodged in a crack on the bridge over the tracks.  Fortunately we had spares so when we didn’t find it, we didn’t have one of us sounding like click, thump, click, thump, click, thump, click, thump as we walked.  We were only ten minutes when the ladies caught up and I was impressed.  The also took the Boo Train detour but not likely the other one.  Gabby also started an hour after we did and the other two started in Santa Cruz de Bezana, a 1.6km longer walk. 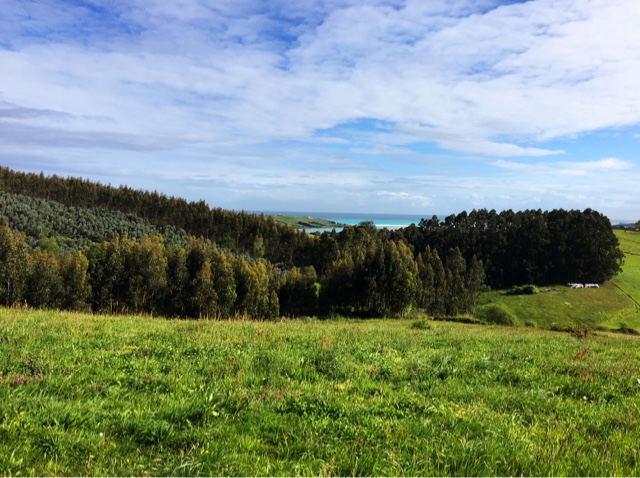 We all enjoyed another café stop in a very nice bar, just across from the Requejada albergue, 30m off the Camino on the main street.  After that, we headed off, expecting the ladies to catch up somewhere in the final 10km but they never did.  We were left to go through the ugly part of the Camino alone, passing though the industrial giant of Solvay and the whole of Solvay-villa with their own school, medical facility, casino, club house, etc. 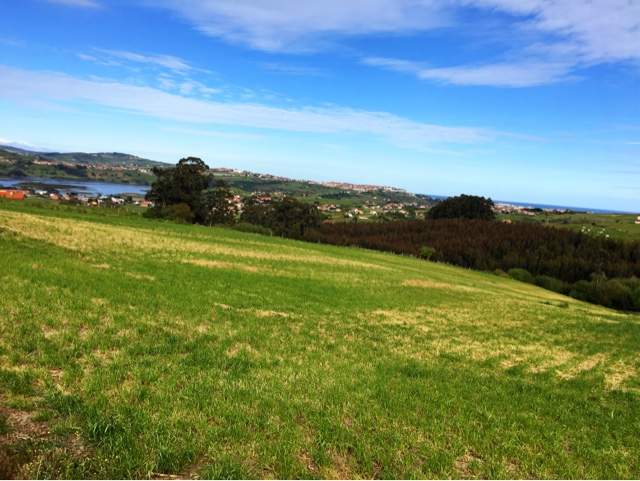 After turning onto another bridge over a river – a legally crossed one – we went trough a little of suburbia before the final 5 or 6km of rural roads to Santillana del Mar.  Just before Santillana, we saw Hannah and Lisbette so we waited for them.  I am not sure the route that they took because they usually walk at our speed and they started today in Santander, 10km before where we started at the same time!  They also didn’t see they other ladies we had a snack with.  They might have fallen asleep on the Boo Train and only gotten off a few hundred meters before we saw them.  I don’t care though, that’s not my business. 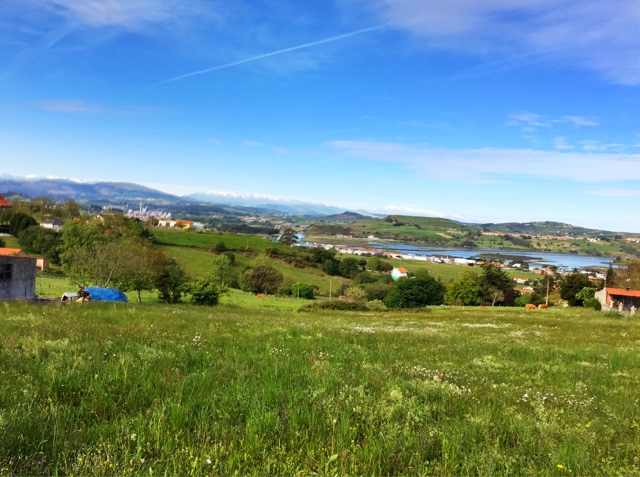 For anyone following us, if you are using the Gronze site, they recommend the Santander to Santillana del Mar as one day, 37.1km stage.  Beware though that the actual, officially marked trail between those cities is actually closer to about 43km.  Feel free to be creative as you like but don’t let Gronze fool you. 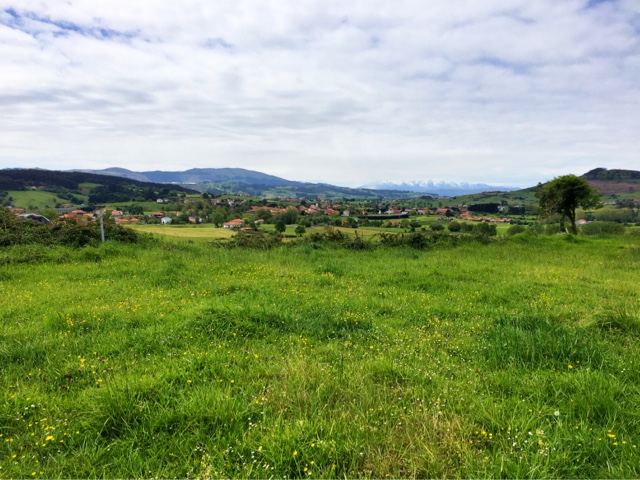 The only thing I knew ahead of time about Santillana del Mar was that it seemed have a lot of places to stay for such a small looking village on the map.  I figured the map was wrong or misleading but, no, this place is small.  As we approached, we were both in awe.  It looked like a fairytale town.  Every building here looks at least 400 years old and in very good shape.  Earlier in the day (and everyday), we pass many derelict 50-100 year old buildings so this place is very impressive.  We heading out now to sightsee and eat dinner, hopefully before 9:00pm.
Peace y’all. 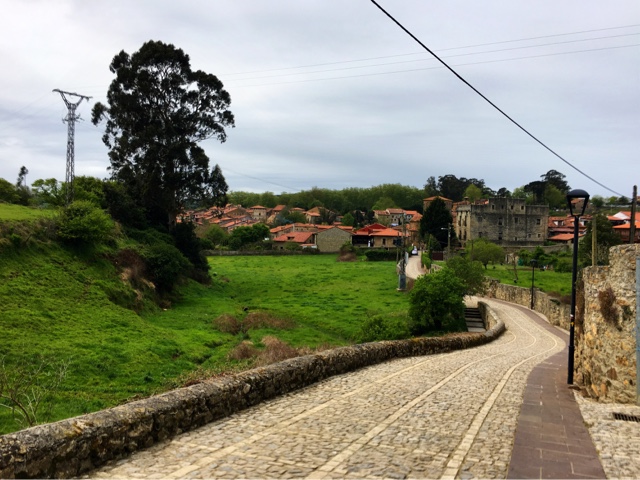 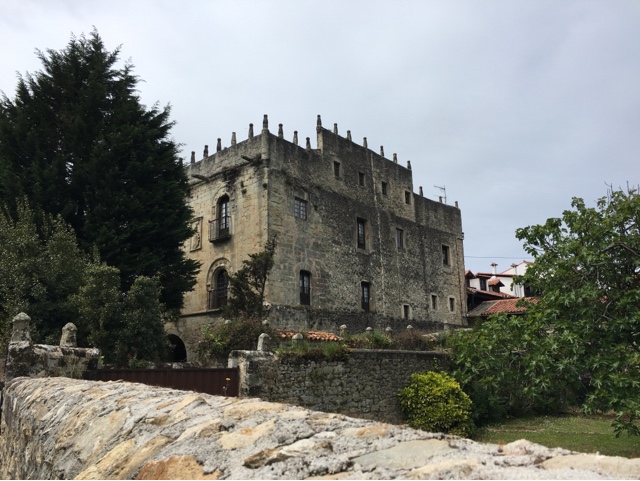 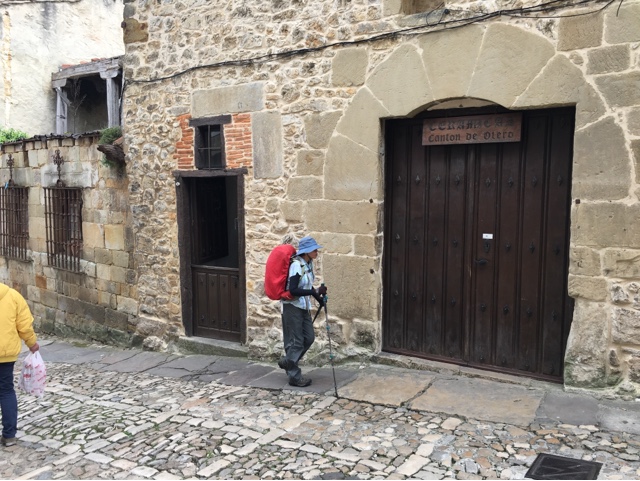 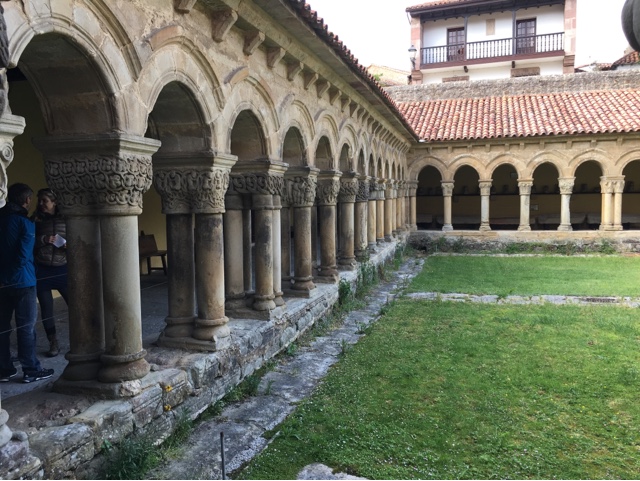 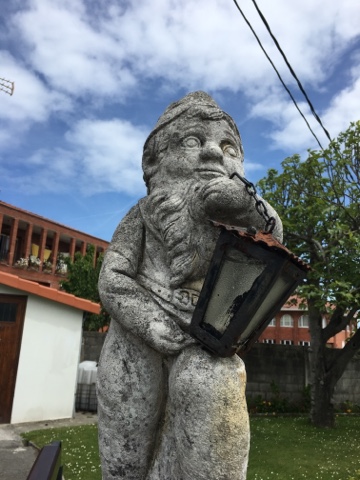